To bad we aren't going to include Panmunjom (Joint Security Area) in our Korea Tour Cookbook. 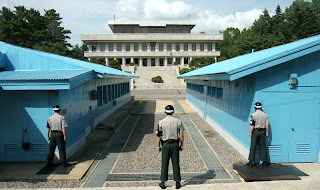 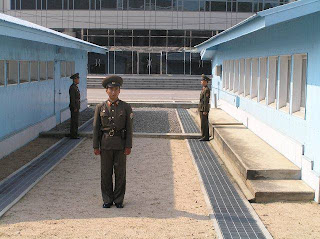 Panmunjeom is located in the demilitarized zone, 50 km north from Seoul and 10 km east from the city of Gaeseong.

This area is most notably known for the peace talks that were held here on October 25, 1951 and was designated as the Joint Security Area on July 27, 1953 when the armistice agreement was signed.

Once used as a management office, Panmunjeom has been used as now a conference room since the Red Cross held an international conference here on September 20, 1971.

It is the only place where North Koreans and South Koreans can come in contact on a daily basis and make efforts towards the peace of Korea.

The reason why? Because visitors aren't allowed to take any photos during the visit. The only two places that visitors are allowed to do so are, in the conference rooms and on the bus. Huh? Conference rooms? Of course tourist wants a memorable picture with the borders' soldiers who are in the middle of facing south and north! Come on...the fee is 77,000 won = RM200+, and you are risking your chance to photograph the scene "from the bus" and what if it turns out to be blurry and shaky? Wasted.

Unbuttoned by Biqque at 2:40 PM

Cool! Read about it but... if only can take pics. Cheerios x)