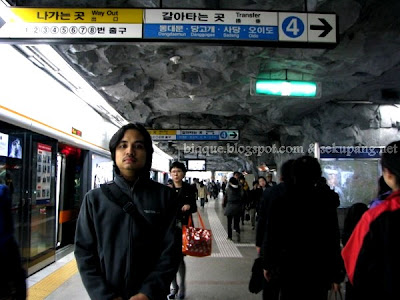 We walked out from the subway station and reached one big underground shopping mall. There was Haechi exhibit hall, souvenir shop and statue on the way out.

Tips : Haechi is Korean mystical unicorn-lion animal that becomes the signature icon of Korea. It distinguishes good from evil. 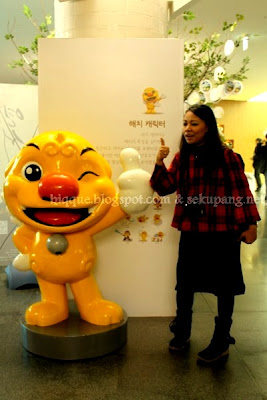 We walked up the stairs and saw many locals loitering around the massive square.

“Oooo…this is the place, Gwanghwamun Square…see that statue? It’s King Sejong the great.” It was too far to recognize. Further behind this statue, we hardly saw the Gate of Nandaemun.

Tips : These two places of interest are amongst the landmarks of Seoul and you must visit them! (We didn’t…)

“Eh, where’s the counter?” We couldn’t find the Seoul City Bus Tour ticket counter so we went down the information center, opposite the Haechi souvenir shop. The lady pointed us to the Exit 6 and asked us to find the Donghwa Duty Free Shop. The ticket counter should be around that area.

So we continued walking and finally saw the ticket counter. 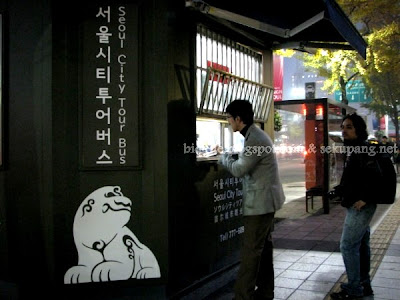 There were day and night courses offered at the counter. And there were 1-story bus and 2-story bus to choose. We chose night course coz obviously it was already 7.00PM, and we chose 2-story bus coz easy to take pictures.

We paid for 10,000won=RM30 each and waited for the bus, 30meters away from the counter. We had exactly an hour to kill.

“Hmm…what to do…eh what’s that?” I pointed to one big statue on the left. It was located in front of one big junction, that I believed as hype as Shibuya (people was crossing from all directions). 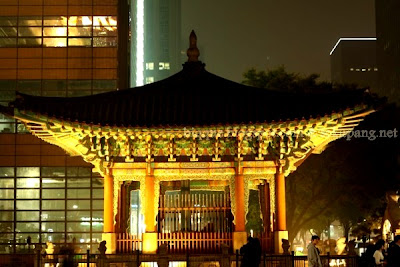 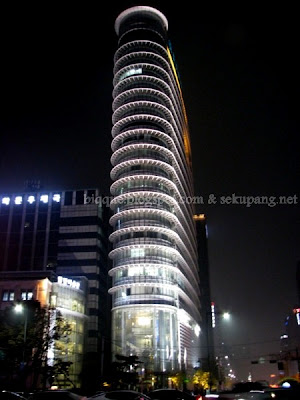 We walked towards the statue and crossed the road with the help of traffic officers. Good huh? I set up the tripod and we started to snap pictures of the statue. Suddenly, colorful lights appeared from the water fountain! 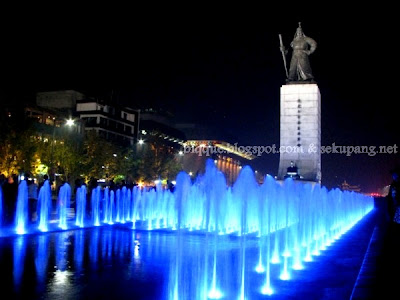 “Waaaaaa so beautifulllll!” People started to snap pictures with the water fountains, blocking us, who were in the middle of setting up the tripod. 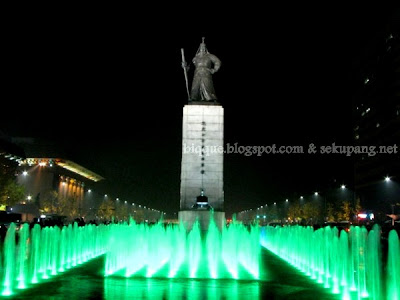 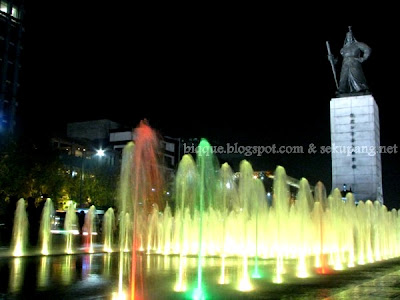 We didn’t let go the chances to pose together but doing couple poses were too glamour as locals tend to pass by and waited for the camera screen to flash the result, while we standing in front of the camera like mannequin. Hahaha!

We got to know that statue was actually Admiral Yi, Sun Shin, once we got back to M’sia. (Ok what…we didn’t have any brochure for that maaa…)

It was about time. So, we walked back to the bus stop and waited for the double decker. 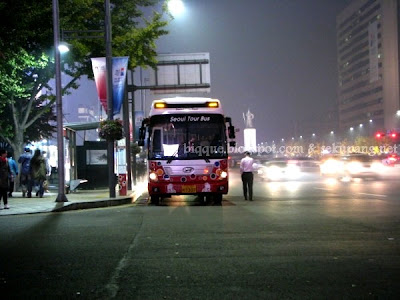 Tips : Don’t miss this bus, as this is the ONLY bus for night course.

Once everyone went on board, the tour guide started to communicate with all passengers, in Korean! Huh? Didn’t she know that some of the passengers were tourist? I went down and asked her for English, but too bad, she said she shall only conversed in Korean. Pfft!

I went back to my place and saw an audio guide with earphone, behind the front seat. I looked at hubby, he looked at his, and we started to mess with the things. We put on the earphone and clicked all the buttons, and listened to all the places descriptions.

“Oooooo got Englishhhh.” We smiled.

“Err sorry, no listen. Automatic.” The tour guide approached us. How would we know! If you don’t want passengers to play around with the gadget, disabled it lah! Kannnnn…

We waited. I saw a group of Nihonji at front seats. Locals next to us. More locals at the back with some tourists next to them. Everyone was already sleepy in this chilly air-conditioned bus.

The bus left at 8.00PM and started its journey from in-skirt to out-skirt.

Tips : Experienced the Seoul City via bus can be fun or vice versa. It is how you take it and where they take you to. So enjoy!

“Next stop will be Nandaemun Market. This market blablabla…” the audio guide automatically started. We saw many people down there, shopping and eating. Hmmm...should have gone there huh?

“Next stop will be Mapo Bridge. This bridge blablabla…” it continued.

With moving bus, it was hard to snap pictures, plus, we had to bear with not-so-clean bus window as our lens. Hubby tried to snap all pictures with his DSLR, increased the ISO, but most of them turned out to be blurry and shaky.

“Next stop will be Hannam Bridge. This bridge blablabla…” the audio guide continued.

Tips : When it says stop, it doesn’t mean “stop and you can go down”. You’ll be in the moving bus like Jurassic Park.

“Why all stops are bridge??? Might as well they name it as Bridge Tour!” Hubby started to make fun of the bus tour. We laughed out loud. 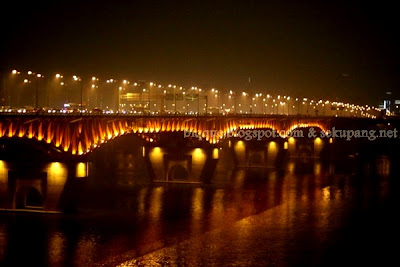 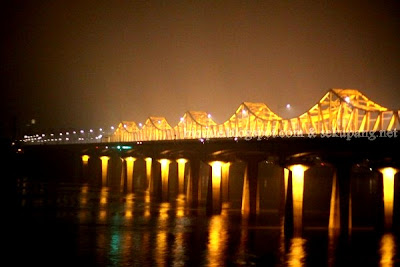 SEROUS! I KID YOU NOT! About 11 stops and most of them were bridges! And guess what? All these bridges were on your right! So what happened to all passengers sat at the left?! (I looked on my left) They all went sleeping!!! Hahaha!

Tips : Buy seat on the right side of the bus. Berbaloi-baloi…(worth it!).

After crossing this bridge and that bridge, we found that we were actually making one big round trip of Seoul City. Then the bus suddenly stopped in the middle of no where, at one huge empty open-parking space, and parked in line with other tour bus and few cars. We knew that this was the only stop that we can go down.

So we went down and said, “HUH? WHAT PLACE IS THIS?” while showing thumb down. 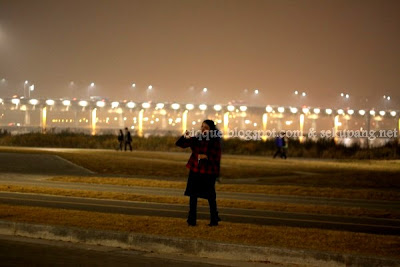 IT WAS NOTHING THERE! Only one restaurant (far from the bus), 4-5 locals cycling around, sea and bridges at the back. THIS IS WHY WE DON’T DO TOUR BY AGENCY! Wasted. Anyhow, we walked around and got back on the bus. At least, we experienced one boring bus tour. Hahaha! (Maybe it is better during day time...I don't know...)

Tips : 20 minutes are provided for you to walk around and do nothing. Get on the bus earlier to avoid from being left behind.

The bus continued its journey and I seriously can’t figure out, why the hell on earth the bus made a U-turn at Namsam Park, when it didn’t have any intention to bring us to Seoul Tower! (We just saw Seoul Tower in between gap of trees around the Namsam Park). 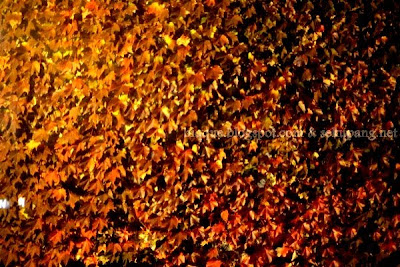 We finally reached the bus station at Gwanghwamun about 9.30PM and caught a train from Gwanghwamun – Line 5 and stopped at Jongno 5 (o) ga. Lucky it was only 2 stations away and we walked back to our hotel and had mushroom chicken soup in glass. Sad huh?

no n seoul tower, i can only see maple leaves....

oh, cantinkye fountain warna warni. I remember the statue but not the fountain hehe...