Today was the final day in Seoul. So we planned to do some quick shopping before we went off to the airport. Since we won’t come back to the hotel, we straight away checked out and carried all bags along. We had better plan!

Few days using subway, we saw rental lockers at every end of the subway exits. So we test our luck to use one of them. We chose Jongno 5 (o) ga Station – Line 1’s locker since that was the most used station and we already familiarized with the surroundings.

We stiffed in front of the yellow-square-lockers. “How to use ar?” I asked.

“Read the instructions…we have to know whether we are using cash, T-money or card…” hubby looked at one A4 paper pasted on one of the locker while I was dying trying to find the button to press.

“It is not user friendly at all…what to press? And what the hell! They put the instruction in Korean?! Who’s going to use it? Locals or tourists??” We started to piss off as we had spend almost 15minutes standing there, trying to figure out how to use it.

“Press 1 to select…press 5 to key in the locker number…then press 18…” We chose no.18, coz it’s bigger, so we can put two backpacks in there.

“Cannot laaaaaaaaaa…” I complaint. More than 20 minutes has passed. We still can’t figure out how to use the locker! And we didn’t want to waste anymore longer! We’ve got to do some shopping! Hey!!!

“Let me find the subway officer…” I said to hubby.

Tips : Subway officers who look like policemen will always be walking around the subway compound. Get their help to help you…though I’m sure the chances are very thin, maybe 20% of understanding what you need.

“Sorry, how to use this?” I spoke simple English. As expected, they didn’t really get what I said but judging on the body language, I knew they knew that we were in the middle of trying to access the locker system.

“Haseyo hamsa hamida oppa omma hase oncho haneda?” Ok, I purposely made it, coz I didn’t understand what they were saying. There were three of them. One of them trying to read the instruction, while another one trying to press the button. Then the other one tried to correct the person who pressed the button, over and over.

(See, they completely lost…what do you guys expect?)

Anyway, to cut the story short, the FINALLY managed to open the locker for us. There was actually one step missing from the instruction! D’uhhh! Everyone was happy and clapping. We thanked them and they watched us depositing in the bags. The first 4 hours, we had to pay 3,000won=RM9 since we chose the medium sized locker.

Tips : Small locker will be 2,000won=RM6. Locker is charged for every 4 hours. Keep Don’t worry, if it exceeds 4 hours and you still not there to claim your bags, the locker won’t open by itself. You just need to let it there and pay the whole sum right after you come back to claim it.

We moved on and caught a train from this station to Jonggak Station – Line 1 and walked 10-15minutes to reach Insadong. 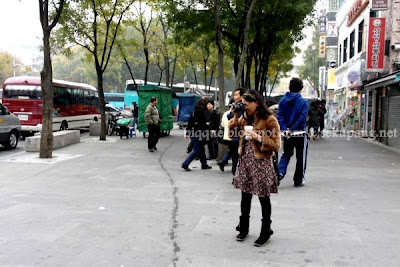 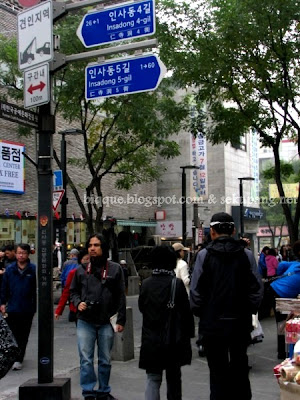 “Here got many things from antiques, souvenir shops, galleries, and such…and it only opens on Sunday.” Hubby explained to me while sipping coffee at Dunkin Donuts.

Tips : Insadong Sunday Market opens as early as 10.00AM. No other days, no other times.

“Wah, got event la…some sort of ceremony…” I said when I saw few women in colorful Hanbok and men playing instruments. 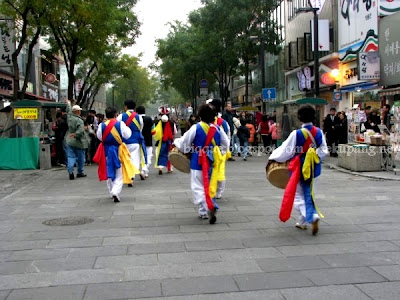 We explored the street and saw one big souvenir shop named Insa, Korea. They sell many things and I tried to hit my luck to bargain, yes, it’s bargain-able. Hehe! We continued walking and saw more street vendors started to organize their selling items. 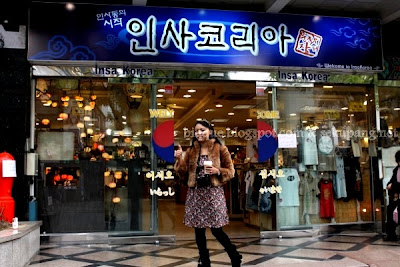 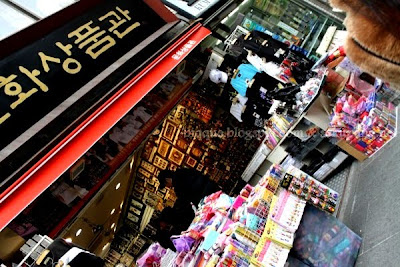 Tips : The best thing about this place is they are selling unique items. From art brushes, teapots, magnets, you name it. There are also peace-no-war-voters, holding “free hugs” card and feel free to hug them. Watch out your wallets ya! Who knows? Hehe! 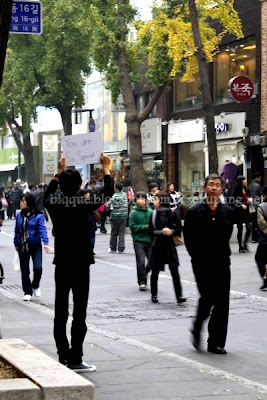 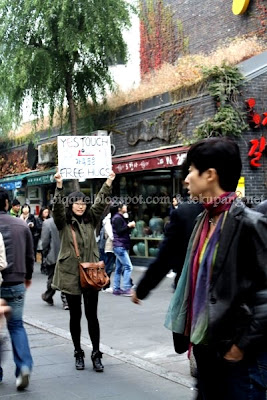 We actually walked from end to end, just to cover the whole street. We stopped at one shop and started to bargain with the shop owner, who happened used to visit M’sia once. “M’sia? Hot…hot…” We laughed.

I bought 8 adult t-shirts and 1 child soccer jersey, and paid for 34,000won=RM102…and they weren’t all for me. See, how nice I am huh? The uncle was so damn happy as we gave him so much money that day. 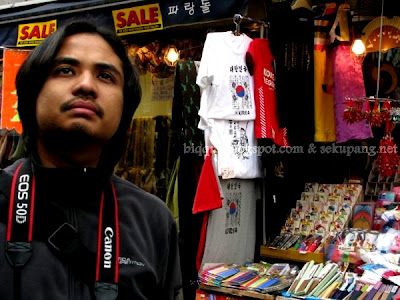 I then saw maple leaves and started to snap few artistic pictures. Everyone who was passing by looked at me like I have never seen any maple leaves before. OF COURSE I NEVER SEEN ANY MAPLE LEAVES BEFOREEEEE! Hahaha! 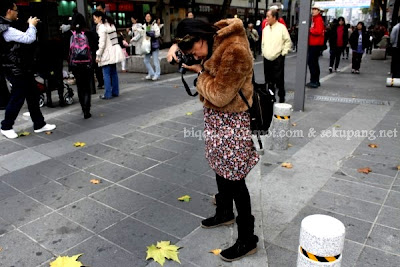 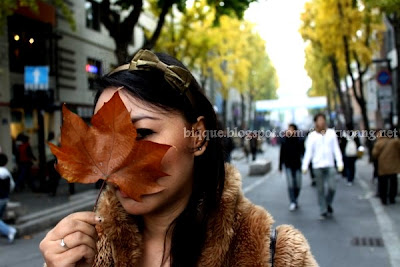 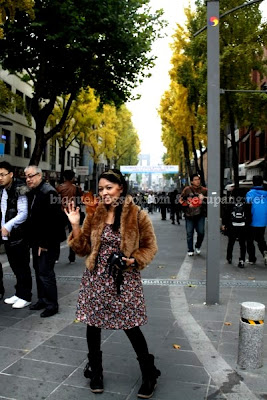 “You go sit next to that uncle…so old skool you know…” hubby asked me to sit on one bench and quickly took my picture. Then I met the future, and took a snap with one metallic robot that looked like Bender in Futurama. 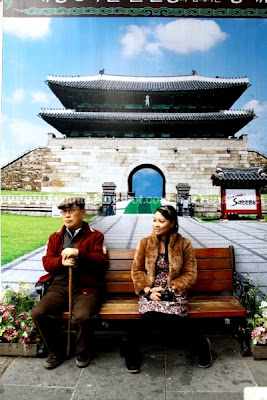 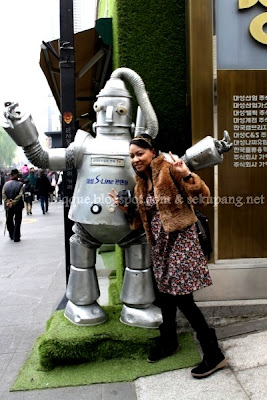 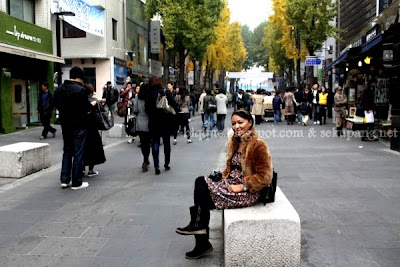 It was fun walking down the street as more and more traditional street vendors did some experimentation on their products. There was one villager in white who kept on hammering rice, which later being mixed and covered with nuts. Looked yummy! Since it was rice and nut based, we tested a bit...HELL YES, IT WAS REALLY YUMMY! 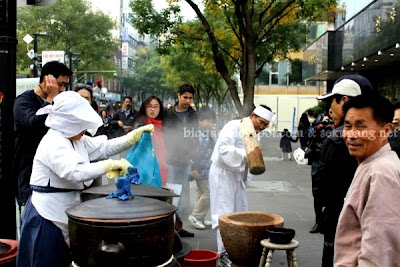 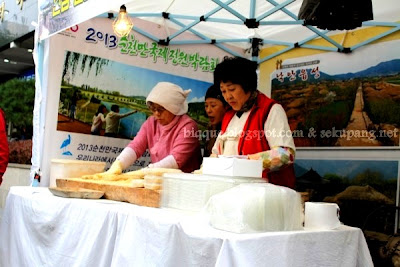 Then we saw a board full of rare magnets and bought two for our collections. Not far from that place, more souvenir shops selling caps, t-shirts, postcards, traditional costumes, and etc. I bought 3 baseball caps for 25,000won=RM75! Expensive huh?! Need to claim that from my sister! 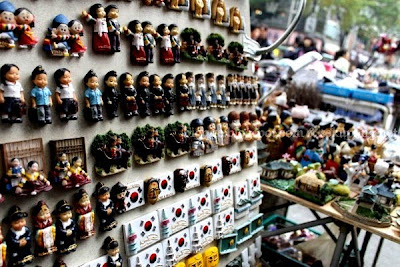 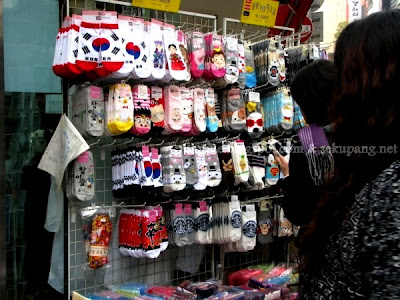 We walked back towards the subway station and reached the event place that we saw earlier. This time more and more locals gathered around the stage. I managed to clutch one lady in Hanbok and got a picture with her. Hehe! 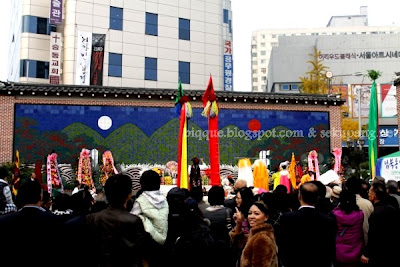 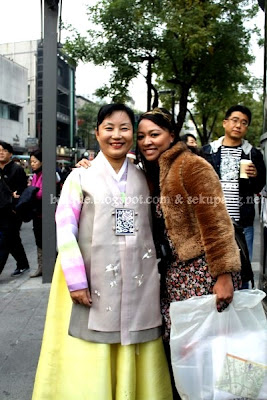 I wasn’t sure what the ceremony was for but we saw one big dead pinky pig with money on its body. Ewwww! We climbed on one stone-bench, stood up and watched the ceremony from far, tried to zoom and focus on the dead pig. Haha! 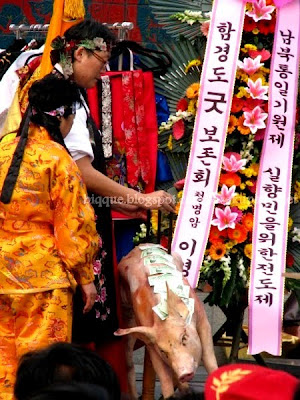 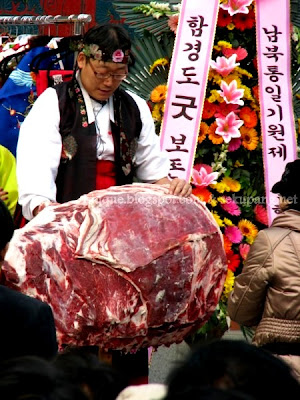 “So, what’s next? We still have time…Nandaemun or Dongdaemun?” I asked.

nice photos. seoul looks good (except for the pig)

I went skiing in Korea early this year but you seem to have more fun and colours in your photos. That's the problem with following a tour as we were on the move always.

I have added your blog in my list! Good blog you have.

nice shot with the old man

U & ur hubby looks GOOD in every photos..!!! Keep going On! 'Gam-Pa-Teh'!!! & U R smart too...choosen '2-To-Go' instead of Grp departure!! (its really like Shit tour la..No More Personally time & have to wake up VERY EARLY in de morning everyday & just bcoz of [COMPULSORY] join their sort kind of ..Ginseng..Pearl..Gems...shop..like shit la haha!)

yin ling, tx! :D that is y we never register for agency tour...so boring one...namind, u can try to travel on your own, just need to do more preparation la :)