My Dad In Law A.K.A Hubby's Dad

Perak and durian, selalu dikaitkan bersama…and yup, we had durian at hubby’s parents’ and brought back a container of bubur durian to ours’.

It happened when hubby’s dad bought roughly 7-8 durians back in Taiping and we had it during Saturday’s lunch. Typical me, who can’t stop talking bout food, excitedly imagined and spoken out how delicious bubur durian with roti would be. And guess what? Hubby’s dad took it as a wish when the next day’s lunch, I saw hubby’s mom started to squeeze the santan, looped the pandan leaves, while hubby’s dad started to open up the remaining durians!

Owh god…he did it again!

Hubby’s dad…a cool, kind-hearted, non-talkative, wise man, started to fulfill whatever I craved/asked for since the day he brought me a jug of plain water during the meet up for the first time, to get to know hubby’s family. Hubby’s mom served milo and the moment she offered me the drink, hubby told her that I only drink plain water. Yes, that’s soooooo true but I didn’t expect hubby to notify them in front of me! I still can drink that milo dear…and few minutes later,

Hubby’s dad brought out a jug of plain water and 2 glasses, for me and for him! (Just to cover up a.k.a he also drinks plain water which hubby said he never did that).

That was the first…the starting point.

Once, when I saw durian stalls along the way to Trong. We were in hubby’s dad’s car, hubby was driving, hubby’s dad was on the co-pilot seat, I was at the back, and to break the silence among both of them (yeah, my hubby and his dad REALLY non-talkative guys), I started to talk cheap! I made a statement,

And so, he did it again!

He asked hubby to stop at the next stall and bought 5 durians with RM90++! Ya Allah…shame on you Biqque! And not only durian, I once unintended-ly said,

Hubby’s dad was eating ice cream at that time! And due to that stupid statement that I made, he offered me to have one! He let me choose between chocolate or strawberry filling. What have you done Biqque…macam budak-budak!


He even once, dig out some cute yams (indoor plant) during our visit to hubby’s maktok’s property, when I told him that I like this one kind of big leaves yam that being put up for sale in nursery! With his expressionless face, he pulled out around 4-5 anak pokok, down the way to the river back there, ignoring the mosquitoes that bite.

Yup, he did it again!

And last but not least, same goes to what happened at one street stall, where I and hubby’s dad had laksa, while hubby had mee rebus. A human habit, to taste other’s food, and so did I. I tasted hubby’s mee rebus and hubby’s dad suddenly asked me whether I want one or not.

AND FOR ONCE, I STOPPED HIM TO GET ME FOR ANOTHER MEE REBUS! HEHE!

Thanks abah…I will definitely use this chance when I get pregnant…hehe! As for current interest, I enjoy telling you about politics-blogging! Makes me feel “THERE GOES YOUR BRAINY DAUGHTER IN LAW”.

When Mr. DJ Got Mic

Last weekend, we went back to for a wedding reception of hubby’s friend. We, in the company of hubby’s ex-classmates, convoyed 3 cars started from Hentian Rawang. We arrived at Dewan Risda Ipoh, around , just 15 minutes before the bride and groom scheduled to arrive. Waiting in a well-decorative hall, we started to be in question,

WHAT’S WRONG WITH THIS DJ, WHO KEPT ON PLAYING DANGDUT SONG AFTER ONE AND ANOTHER? AND IF IT WASN’T DANGDUT, IT WOULD BE A SAD SONG! VERY SAD SONG TILL YOU’D BE ABLE TO FLASHBACK WHAT YOUR EX-BF OR EX-GF DID!

If I was the bride, he would have been killed right away after I entered the hall!

He didn’t even play any wedding songs! Not even the most popular Selamat Pengantin Baru song! Believe me…me and hubby’s ex-classmates even played ‘guess the song title’ and a friend of Ima, could barely remembered a song by Jelmol…JELMOL! How on earth the DJ got that song in the form of CD at the first place? Kahkahkah!

(Note : If you listened to 80s, particularly Malay group, you should be laughing by now when you heard of Jelmol!)

This wasn’t good enough. Let me crack your joints with this one!

Tell me I didn’t attend the wrong occasion! Is this a wedding celebration or break-up proclamation? Omg! Nonetheless, I would not living in denial that he sounded good doh…I think that was the reason why he chose that song, coz he sounded like one.

Well, the bride’s sister did explain to us that during the rehearsal, it was another DJ, and he had rehearsed it with wedding songs…but it turned out to be ‘these’ way of choices…yeah, maybe it suited the old folks’ ears and for some guests who didn’t even bother to cherish the songs played, but for a person like me, who take pleasure in a genuine Malay wedding songs by the side of telur rebus, I would be surprised if I heard Zaiton Sameon’s song in a wedding reception! Hehe!

In conclusion, the wedding was sweet, the hall was so pretty, the pelamin and the baju were not too much, the food was fantastic, and I did enjoy snapping the mempelai pictures in their ‘pewarisan’ theme. Above all, I had become a 3 minutes-pose-model-bidan-terjun to mirror the bride so that she may look good in the wedding album! Hik! (Yeah, I know the photographer team, http://chinta.fotopages.com/. They photo-ed my cousin, a.k.a hubby’s childhood friend, Dr. Adibah, few years back and this team popular with their instant-slumber-candid-shot.Anyway, our wedding photographer was http://takteh.fotopages.com/.)

This is about friends

Sekupang.net Is 3rd In Yahoo Search 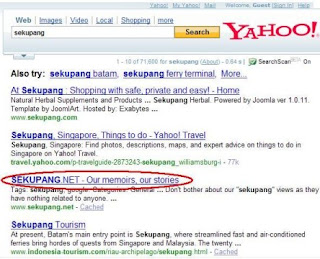 Sekupang.net Is 7th In Google Search 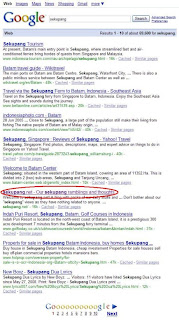 This is about general
Newer Posts Older Posts Home
Subscribe to: Posts (Atom)