I had a big grinned on my face. Hubby knew that his wife will always be a shopping freak cheapskate. Ala, come on…I normally didn’t spend much la…one or two things je…

“Alamak, nature calls!!!” Dang…need to find a toilet! I went back to the Information Counter and asked one of the officers. She showed me one, on the second floor of 4-storey building.

Tips : Seoul rawks! You can easily find Gents & Ladies every 100 meters. Mobile or not, not to worry, they are clean! Plus, the bowl warms your ass :) Oooo…niceeeee…

Hubby waited at downstairs. I went up and had my business in peace. Suddenly,

“WAITTTTTTTTTTT!!!” I shouted. Then the knocking went away.

“WAITTTTTTTTTTT!!! SOMEONE IN HEREEEEEE!!!” I shouted knowing that person definitely didn’t understand what I was saying. She must be local, I bet!

I finally had no feeling to continue and opened the door. There I saw an old middle-age restaurant helper, in her apron, babbled in Korean while looking at me. I felt like slapping her face you know! Hahaha! But again, I was clearly aware that I was using a restaurant toilet…so I just shut up and went down.

We sat down by the corridors and discussed, which market that we wanted to go.

Tips : There are many popular markets in Seoul. Among them are Dongdaemun, Nandaemun, Itaewon, and Myeong-dong. All selling different items from clothes, foods, souvenirs, accessories, and what not. They have wholesale, retail, and even street vendors. So know what you are getting before you go to these markets.

We walked back to Angguk Station – Line 3 and changed at Chungmuro Station. We changed to Line 4, and stopped at Myeong-dong Station.

From this station, we had no idea where to go. There was no signboard showing any market nearby. So we stopped at one junction, where hubby took his turn answering nature calls. I waited outside the mobile toilet and once hubby went out, two old local men started to have a word with hubby.

“Yappun…?” One of them told another.

“Japanese…” He made a statement and looked at us.

We smiled and walked away. WE? JAPANESE? WHICH PART??? Hahahaha! Ok, maybe they way I dressed…but the face? Sooooo not! Especially hubby.

Then we saw one alley that full with colors, flags, banners, and shops. So we guessed we were at the right place. We walked down the alley and more people started to cumulate. We stopped at one junction nearby Nature republic where we had to climb the side steps in order to see what was going on. 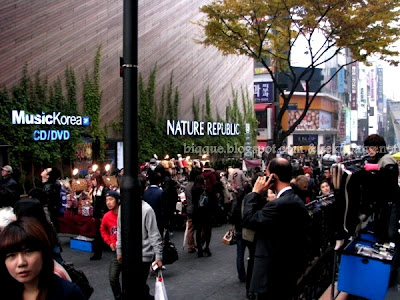 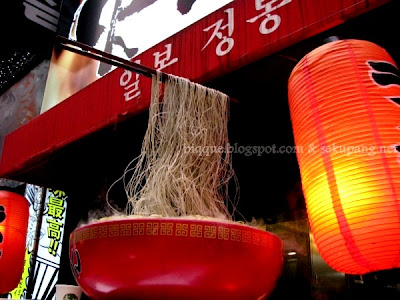 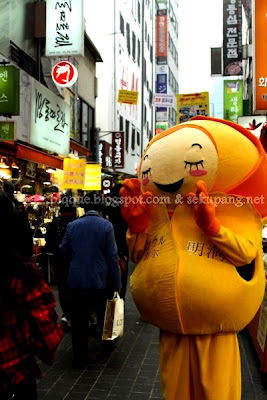 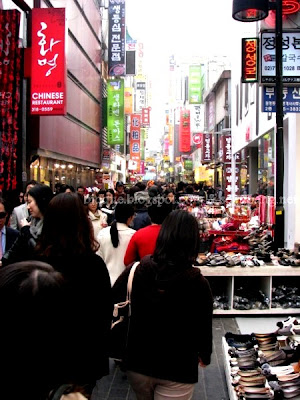 There were thousands of people there! It was so busy and noisy! And we loved it!

I started to take pictures, left, right, this, that. Then I noticed one local girl, mid 20s, looked intently at me (see first pic, right below the left corner). She left her cliques and came to me. I was like, shiat! Then she said,

“You, wear, nice…take picture?” She pointed to my red jacket and black skirt while talking to me. I thought she wanted me to take her picture with her friends, but she actually wanted to take my picture! 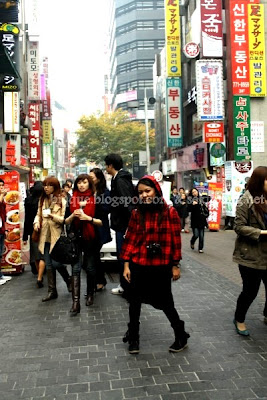 She then went to her cliques and showed my picture. I still in shocked mode and hubby said, “FUIYOOOOOOOO, YOU GLAMOURRRRRR! Hahaha!”

“They must have not seen any jacket like thissssss! Hahaha! Malaysian made, specially designed and tailored by Fara, my frienddddddd” I added.

“Errr...Ayang…like your baju la…” hubby pointed to the picture behind me.

I turned around and saw one model who’s wearing slightly the same jacket as mine! “WHOAAAAA! New arrivalllllllllllll!” I laughed! 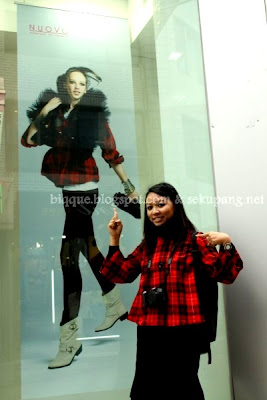 We couldn’t stop laughing the whole way, exploring the Myeong-dong market. IT WAS HELL OF FUN when Korean, the trendiest alongside Japanese, LIKES your clothes! It was an honor.

I saw many street vendors selling grilled octopus, in many types of parts. Since I like octopus and squid, I tried one. I took the grilled tentacles while hubby took finished product, crackers. But I didn’t eat them all, the more I ate, the tougher and sour it got. Bluwek! 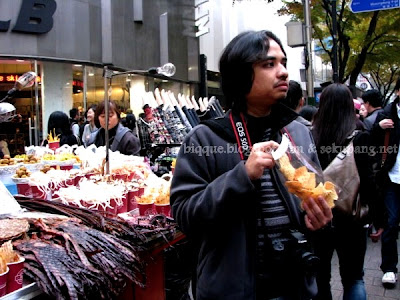 Then I saw one familiar street vendor that selling fried potatoes with mustard and mayo, exactly like what I can get behind my office. I took a picture and the guy shouted “NO! NO!” at me. I smiled and went away. Hahahaha! Sorry, but I’ll keep it. Halo, we already had that in M’sia la…kihkih! 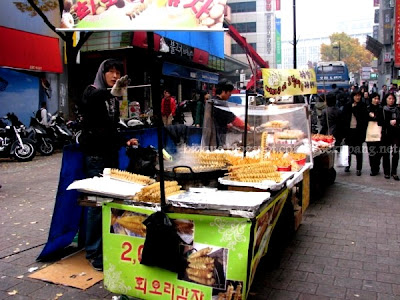 We continued window shopping and we bought nothing. Since it was still early, we planned to have a City Tour by Seoul City Bus Tour. Let’ see whether we satisfied or not, WITH night course!

now u try search me.. Retnawati mohd yusof// coz i still cant find u even with ur email

i go dongdeamun dulu and streets near by.... yg you pegi tuh i tak cover lak... next time leh lar kan kan kan