Like others, hubby and I went for last minute shopping at Jalan Tar. Same goes to his brother which later went on his own way with his gf. I actually wanted to find hubby a blue baju melayu (top only) to match with my blue-white baju kurung moden. At first, hubby didn’t want too, for he still has his cream baju nikah that he only wore once. And to match with his baju, I bought one set of brown kebaya nyonya with cream satin to pair with that kebaya. But, since I’m having two baju raya now, hubby should get another one for him. So blue, here we go!

We decided to take LRT since hubby not willing to drive in heavy traffic around that area (oh god, I am sooooooo lazy to walk!). So we parked at KL Sentral and took Putra LRT, which later we changed to Star LRT at Masjid Jamek. Believe me, by this time, there were hundreds of people down the area, regardless street sellers or customers. And so we thought, there must be thousands of people waiting for us at Jalan Tar! 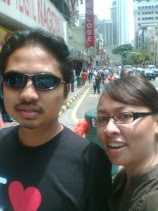 Told cha! Gile ramai orang kat ! We got out from the train and walked along the passage that lead straight into Sogo. It was either 1st floor or 2nd floor, no other way in nor out. Looking at how crowded 1st floor was, we headed to 2nd floor. And guess what? 2nd floor was also crammed with people! We had to get out from there! But when we found a way out, it was sooooo unbelievable that we had to queue to get ourselves out from Sogo! Vice versa, more people were queuing to get inside! Haha! I never see any scenario like this in my life! People were queuing in and out of a shopping complex!

Back to our objective, we were there to find hubby a baju melayu…so Wisma Yakin, here we come. One complete round, not even one, matched my white-blue baju kurung moden. gile nak cari biru ni! But we found one piece that really satisfied hubby (oh yea, hubby SANGATLAH memilih and very particular with what he’s going to wear…satisfaction should comes with quality). Unfortunately, that so called one piece was actually one pair! So we had to say no L…but then I saw one piece of baju johor, exactly like that blue baju melayu teluk belanga that he wanted. At last, a happy smile on hubby’s face!

One set of 5 pieces of butang baju melayu, a wallet, a belt, hubby had enough. As for me, an 80% Polo handbag and 2 pieces of super lelong squared brownish carpets (tetiba terbeli karpet plakkkk). 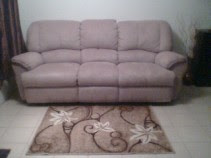 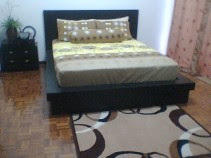 Then...I was starving and thirsty to death! I need foooddddd! No! No! I NEED TO DRINKKKK! I WAS TOTALLY DRIED OUT! (Ok, I can’t puasa but still, I didn’t eat nor drink).

Walking weakly towards the Star LRT (kitorang jalan jauh ok!), I frequently sat on any benches that I saw. Changed LRT at Masjid Jamek, we later reached KL Sentral. And at this moment, I told hubby I REALLY NEED TO DRINK. I bought a bottle of drinking water and when I reached our car, I already finished half of it in one shot! Alhamdulillahhhhh! Hehe!

Sampai rumah, I roasted portion of beefs that I marinade last nite. 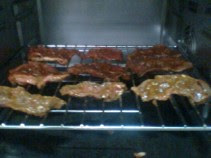