Mr. Saly, the tuk-tuk driver has driven us to all the enormous noted listed temples and waited there, patiently. First stop was Baphuon, three-tiered temple that was built to honor Hindu god, Shiva, which later being converted to Buddhist temple. Anyhow, it didn’t stay long and collapse few years later. There was a very large reclining Buddha inside, but we were too lazy to go in. 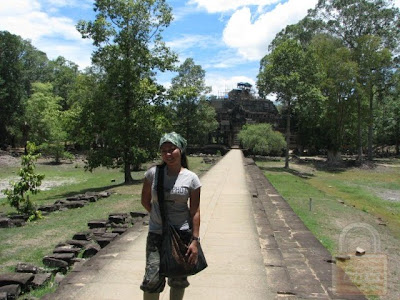 We then passed by few small and unpopular temples called Prasat Suor Prat, opposite to Terrace of Elephant. The road was dusty till we had to cover our face with bags, but the scenery was so picturesque. Hawkers selling their products, tuk-tuk drivers resting under giant trees, what a superb panorama. 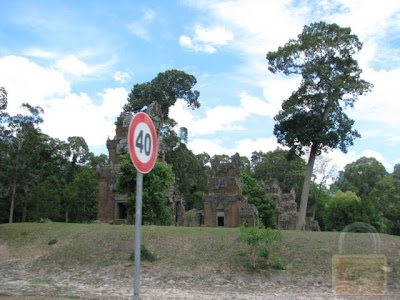 About 10 minutes journey, we saw a Victory Gate upfront, and asked Mr.Saly to stop over. This gate was one of the 5 gates, also the boundary of royal road of Angkor Thom, which we noticed that we had to pass few more temples like Terrace of The Leper King, Tep Pranam and Preah Pithu and Preah Palilay. Few snapped of pictures, off we go. 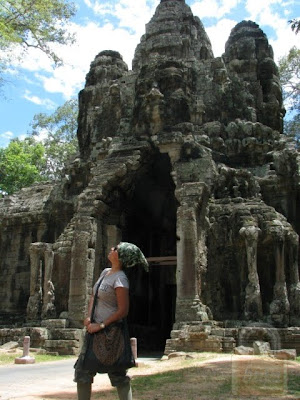 We also passed by Thommanon and Chau Say Thevoda and stopped for few pictures. Hubby was so happy to pose with his blue umbrella and walked his feet high and dazzlingly like a soldier. Haha! We also stopped at Spean Thma and started to give an awe-aspiring look towards two trees that almost buried all cube bricks underneath it. Scary! 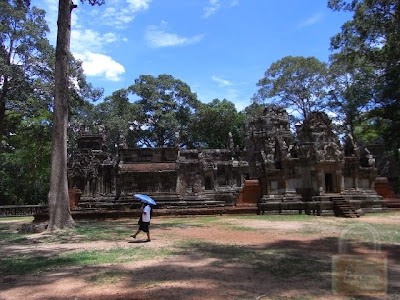 It was 40 minutes past 1 and we didn’t have our lunch yet. Looking at Ta Keo on our left has made us fail to remember how rice looked like. This sandstone temple was built by three generations of King Jayavarman, Jayaviravarman and Suryavarman. Under the hot sun, I didn’t have anymore energy to climb up. Thus, hubby just snapped few pictures from the stairs, downwards and upwards. 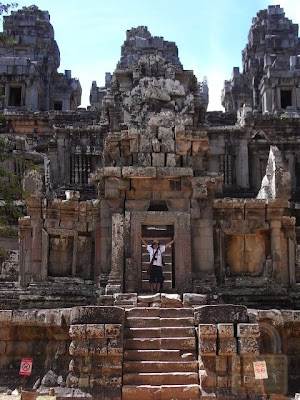 We turned back to our tuk-tuk and we saw Mr. Saly sedapppp je minum air kat kedai depan. Sedapnyeee! He invited us and negotiated with the waitress to get us two fresh coconuts with ices, for 1USD! Good, good! Sambil basahkan tekak, kitorang sembang pasal Malaysia and Cambodia, termasuklah Negara South East Asia yang lain macam Vietnam, Thailand and Indonesia. Memang best cerita pasal history, especially pasal kekejaman Pol Pot. (When you have your breakfast next time, just think that your nasik lemak cost can get one Cambodian family a breakfast, lunch and dinner.) 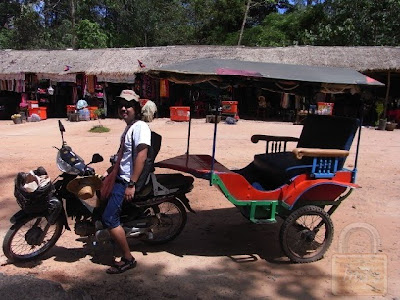 Before we made a move, hubby took a chance to pose on Mr. Saly’s tuk-tuk, as the driver. Haha! Since it was difficult to get Muslim food around this site, we ate our packed bread and shared with Mr. Saly a piece of it, as he also didn’t take his lunch yet. We continued a 5 minutes journey and stop at one of the most popular temple, Ta Prohm. Mr. Saly told us to walk in and meet him over the other side of the temple. Owh, nice, one way in and one way out, so nothing to miss out.

After 100-150 meters of walking on straight dusty clay road in jungle environment, we FINALLY reached this temple! (Bahbi tul! Jauh rupanya! Nasib baik jalan elok!) It was dedicated to King Jayavarman’s mother and also known as tree-in-temple due to fig and silk-cotton trees grew on top of the towers and corridors. We started to have jaw dropping each time we saw giant trees. Unlike other temples, this temple was partially restored and we saw many bricks left unorganized on the jungle floor. 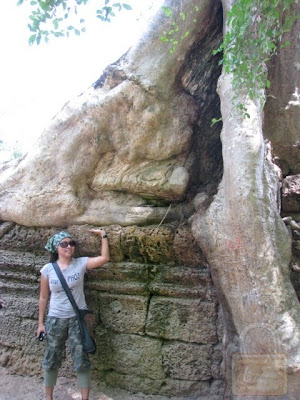 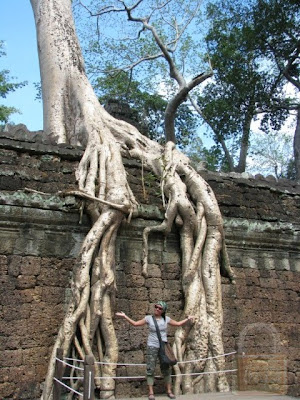 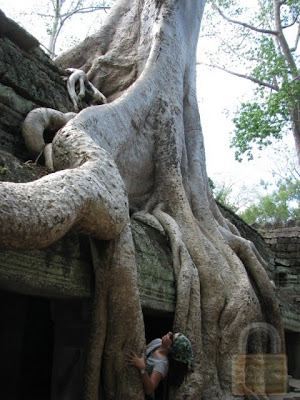 We went inside and saw many tourists on both sides of the temple. More and more giant trees were found which some had to clinging to construction iron stacks. There were danger areas too, so you have to walk carefully, according to trails that have been equipped. (We at first, walked through a different way, but finally managed to find a correct path by following other’s tourist guide…hehehe!) 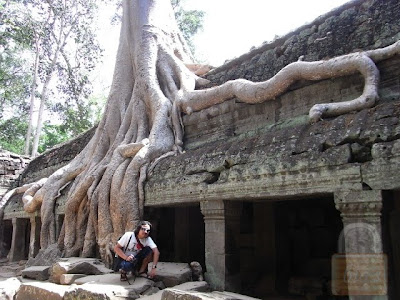 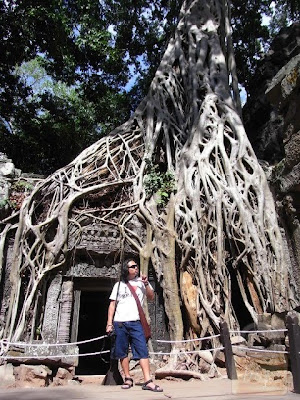 The restorer has actually provided a platform with ring around it, for the purpose of pictures taking by tourist. So never go beyond the ring ya (kang kuar ular ke ape ke, tatauuuuu...). Quite a number of tourists waited to take pictures and we had to be the last since I wanted ours to be a boxing scene. Haha! Not to forget, the apsara dancing pose too! 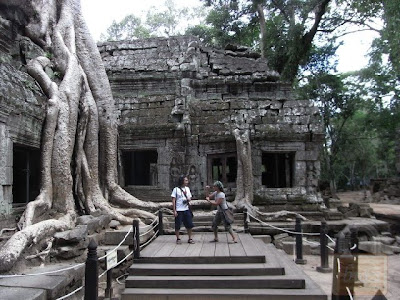 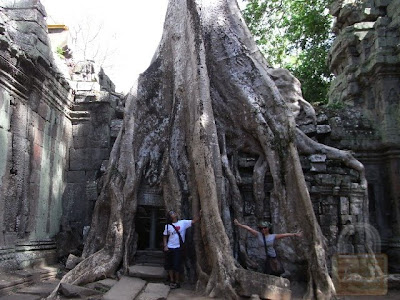 We continued 20 meters and walking around the temple and found ourselves approaching the exit. If I’m not mistaken, we had to go out using one of the side small door, for the main door (inside part) has nearly collapsed.

We stopped for a while.

“Mana si Saly ni?” We looked around, hoping to see Mr. Saly with his tuk-tuk, waiting for us. We saw a long dusty clay road before us.

Yes, we walked another 100-150 meters before we met Mr. Saly and his tuk-tuk. Berpeluh sakan! Lucky we were served with traditional instrumental song by land-mine victims (8-10 of them) who played for their funds. Pity them, but I didn’t donate la. (The funny part was, they will only play whenever someone is approaching. Ye la, kalo tak, penat la kan…)

Next stop was Banteay Kdei. But due to poor construction plan and materials, almost part of it had collapsed. Since no sign of who’s this temple was built for, it was left untold. We had a quick snapshot and walked out from the site.

“No thanks…no…” I smiled and continued walking.

“Where are you coming from?”

“Then where are you coming from?”

“How old are you?” I asked her. She was small…my shoulder height, beautiful eyes with mascara, tanned skin, pony-tailed hair, and hideous sandals.

“Thirteen? But you look small…” I don't think she's thirteen.

She grinned and spoke loudly “We are Cambodian, such a big country but small people…” British slang again.

“Here, I give you 2 bangles…for free! Take!” she gave us a kitty looks.

“Aww…” I hugged her. What a nice girl. We took and straight away wore it.

“For good luck!” she added. (Cambodian good luck means have a very good, luck…not good luck for your exam k…)

We waved at her and walked towards the Srah Srang, a multi-tiered platform baray opposite Banteay Kdei. It was guarded by Naga (not dragon but snakes with multi-heads) and lions. These guardians were facing a square lake that has a temple that will poke out from the middle of the lake during dry season. (But I don’t see any temple pun.) 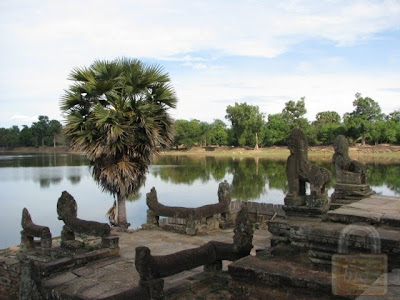 Unbuttoned by Biqque at 4:41 PM

This is about travel n vacation, travel-cambodia-siem reap