Since breakfast wasn’t included, we have spared bread and tuna. We ate and got ready for today’s trip.

No particular plan for that morning, so we just walked out from the hotel and revisited the Independence Monument again. I wasn’t excited at all…seemed like no chemistry with Phnom Penh…maybe because I heart Siem Reap more, and got what I wanted there. 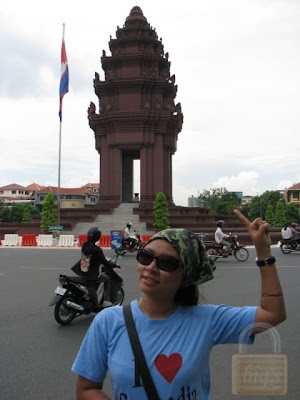 We again snapped few funny pictures at the monument but the sky wasn’t good enough to give a nicer picture. There was a big board of Cambodian King sitting on his royal chair, opposite the monument. Since we don’t read Khmer, we just ignored it. Hahaha! 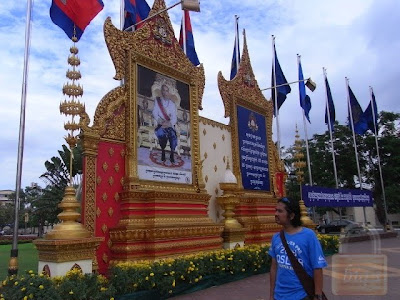 Aligned with the monument, there was a park, in 150meters walking distance. We walked towards it and saw a group of locals having a picket in front of one embassy. Again, since we don’t read Khmer, we had no idea what those flip cards said. 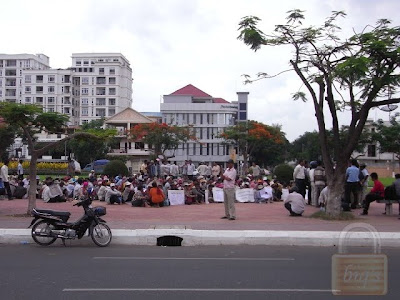 Before we got into trouble, we quickly walked towards the open park. Many tuk-tuk drivers offered their service to us but we turned them down.

“No thanks!” Ramai la pulak!

We then saw one Nagas statue (again, not dragon ya, multi-head snakes) and one lotus flower sculpture located at the middle of the park. Kids who I assumed, skipping school, played football at one corner. Meanwhile, there were homeless sat nearby the temple, in front of the park. 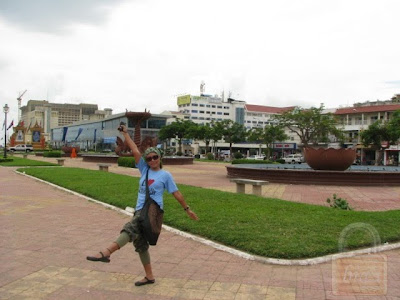 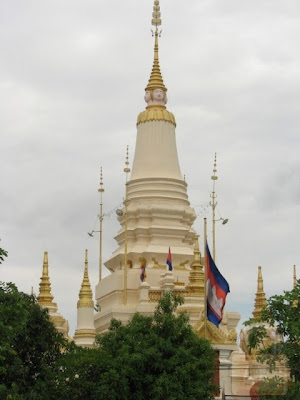 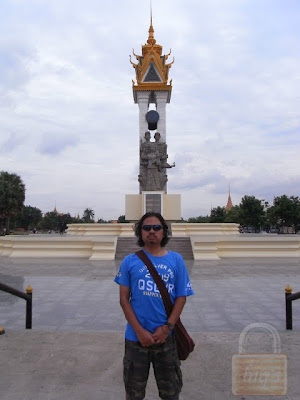 From this park, you can see many buildings like the Independence Monument, Vietnam-Cambo Monument, King Palace and Silver Pagoda. There was also a golden garuda statue, but we were unlucky enough to take a full picture of it, as someone was sitting underneath it…homeless kot. Buttttttt, surprisingly, I managed to give a kinky pose that I called “golden garuda kissing”. 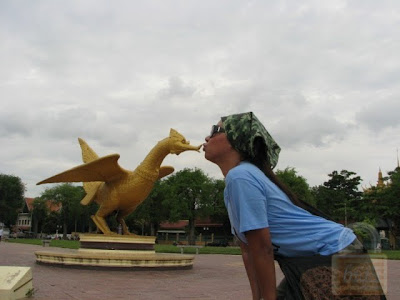 Someone was approaching, again…

Not another offer from tuk-tuk driiii “EH! DAROOS!” we laughed!

We had a chat with him and asked him how much will he charged us if we wanted for a city tour (beware Daroos, we always ask for more.) During the negotiation, we noticed that all previous tuk-tuk drivers that we've turned down, were looking at us. They must be wondering how Daroos can deal with us, like what was wrong with their offer, and what was the difference. It was just becauseeeee, we knew him yesterday! Hahaha!

We were laughing as loud as we can to show how familiar we were with negotiation. I, of course, demanded for more than 5 places with USD20 and guess what, we got it! Win-win situation. He asked for a raise, while I asked for more places. We both shake our hands, agreed with the MOU…in the middle of the park, besides the golden garuda. Chewah!

First stop would be the King’s Palace. It was huge and prosperous. Nice, with detailed traditional carving on the buildings. You can actually access this palace to see the King’s complex. Anyhow, we just snapped few pictures from the Tonle Sap riverside, also known as Sisowath Quay. Comparing the poor boathouses, poor people who tried to make a living at the river, with the King’s Palace on the other side, shows how poverty is trying its best to blend with luxury. The rich is richer and the poor is poorer. 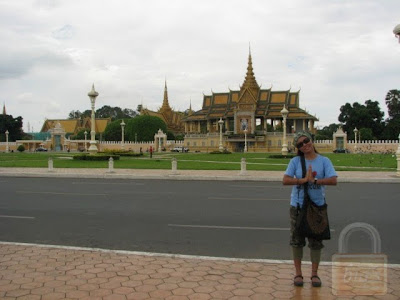 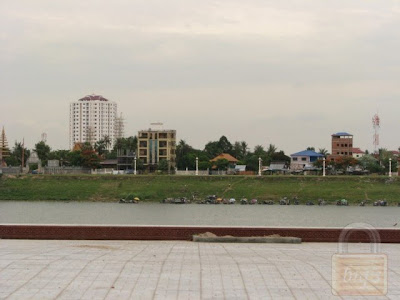 Daroos, the tuk-tuk driver later drove us to Wat Phnom, the most popular pagoda in Phnom Penh. It was named after a widow, whose shrine was located in front of the stupa. The stairways again, were guarded by Nagas at both sides. Many locals were in the midst of praying when we came, so we just took our own sweet time to encircled the outer part of the temple. 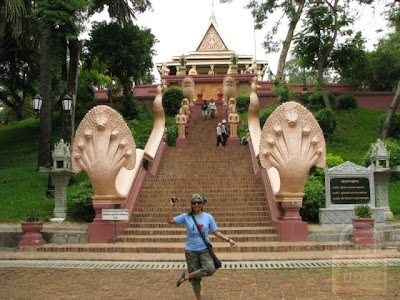 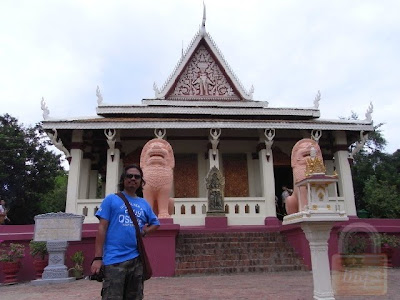 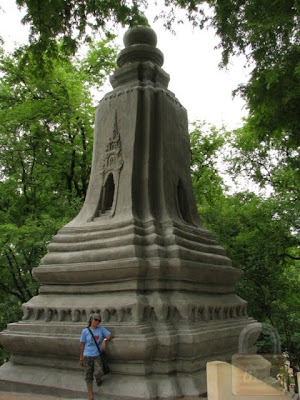 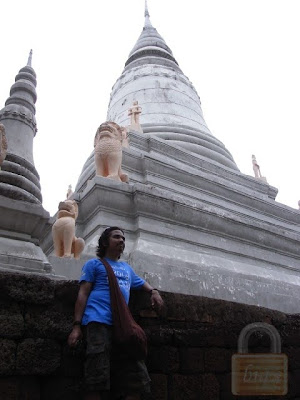 This temple was built on the small hill, and it was surrounded by trees and green grass. There was one big manmade clock at one side, and elephant ride at another side. It was also a popular gathering place for locals, who were seen loitering around the hills, selling souvenirs, dating, hang out with friends and families. 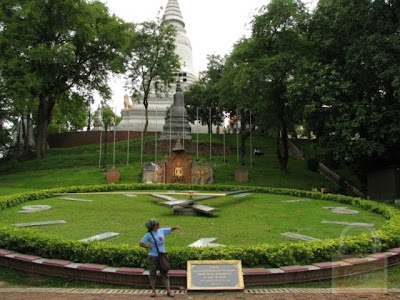 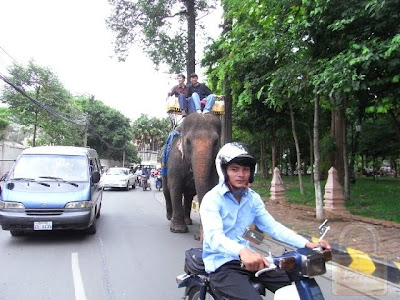 We then went back to our tuk-tuk and asked Daroos to bring us to Boeng Kak Lake. We got info from our friend that this place was popular with low-cost backpackers lodge (as cheap as USD5), located around the lake. Happening place and a must place to go. Landmarks? One big mosque, and of course a lake. He also told us that we can easily get halal foods here. Great, time for lunch! 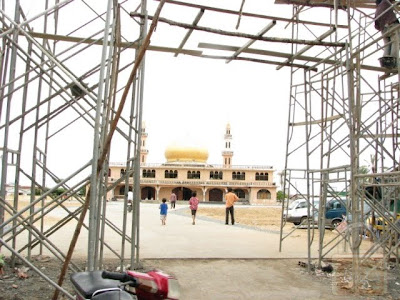 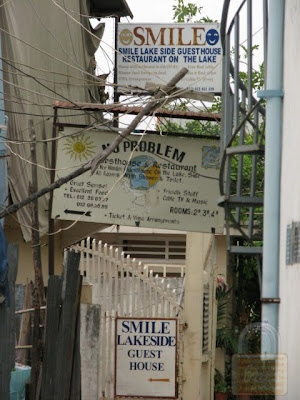 Approaching one narrow road that full with backpackers lodge and seeing a couple of backpackers on their way out, gave a sign that we have reached the lake area. But,

“Where’s the lake?” we asked Daroos.

“You walk there…” pointing at one lakeside lodge and restaurant.

We walked towards the floating lodge and saw 4 cheap rooms, exactly represented backpackers' suites. Underneath it, dried and muddy. Not a place to stay, I must said. In front of us, a couple of tourist sat on the couch, having their lunch. We remained silent, startled, and lost. 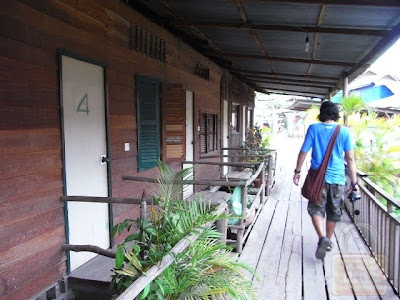 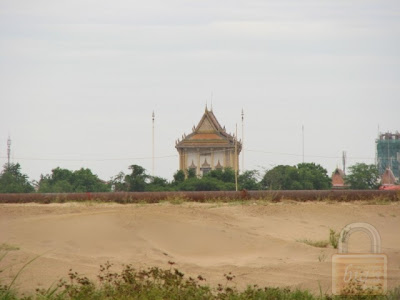 The lake was partially covered with sand. No more beautiful lake and lotuses like what have been described before. There was only one fisherman in his sampan, trying his luck to catch himself a dinner. I believed, the government or private company who bought the land is in the midst of developing something, some sort of up-to-date version of accommodation. 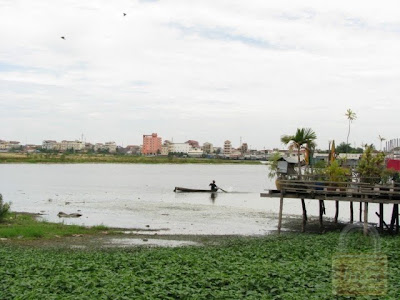 We walked back to the tuk-tuk and asked Daroos, “What happen to the lake?”

“They building hotels…better hotels…” he said.

True enough. There goes another wonderful place…swallowed by the greedy development.

“We go to Killing Field now?” he continued.

On the way to Killing Field, we experienced many astonished things. Underage girl rode small scooter, women steadily carried a basket full of fruits on their heads, three adults rode one bike and got no tickets by doing so, one rich lady in her LV steering cover, overload vehicles, umbrella on high building (huh?), and many more outstanding weird things. 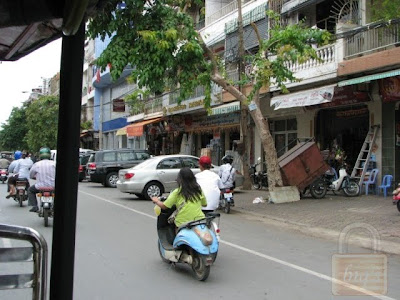 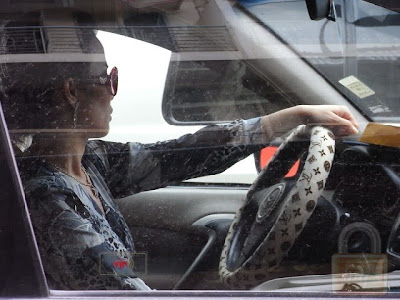 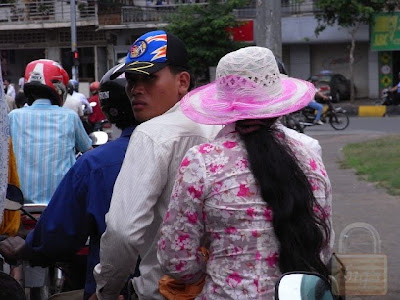 But these cannot be weirder than the Olympic Stadium. It was initially built for Asian Games, but it never happened! The track was unfinished and abandoned, and finally sold to a Taiwanese. The money? Only Khmer know...let's move on... 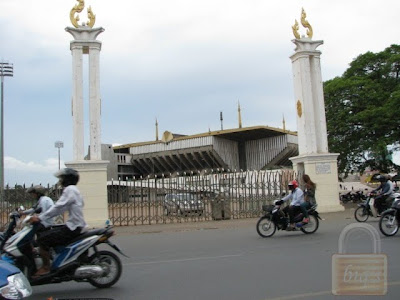 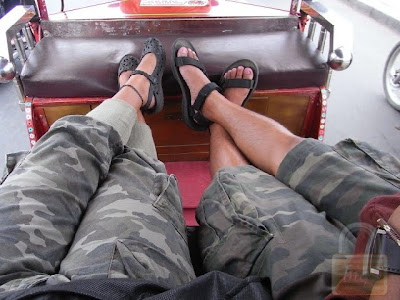 Unbuttoned by Biqque at 9:41 AM

Great blog, nice photos. I have added your blog to my Blogger's Cafe:
http://avarchives.blogspot.com/
in Library 1 - Travel Blogs. Hope you enjoy more visitors

Thank you very much AV! Appreciate your help to do so :) I'm luvin it! Will add your blog too :D