Siem Reap - Anna Marina And The King at Angkor Wat


The second day of Angkor tour was the same good experience as the first day. Undoubtedly, Mr. Saly again drove us to the amazing historical places, Angkor Wat. We were actually a bit late for sunrise, but anyhow, we carried on the plan. We skipped breakfast at the hotel and asked Mr. Saly to stop at our usual place, Angkor Market, to get a pack of bread and mineral waters.

It was cloudy and gloomy. Similar to yesterday’s sunset, we thought of having no luck for today’s sunrise. The main goal was to see the reflection of the lotus buds-shaped towers. We arrived at the main opening area and saw Lion (yang berlubang di bontot nyer) and Naga balustrades on both sides of the causeway. In the distance, we saw straight in front of us, the greatest Hindu complex that was designed to represent Mount Meru, the home of Gods, Angkor Wat. Macam tak percaya je. 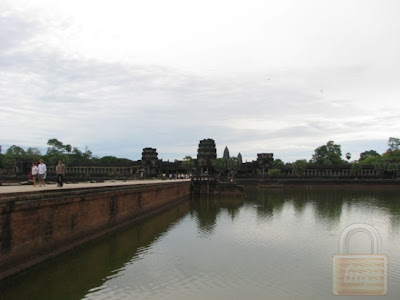 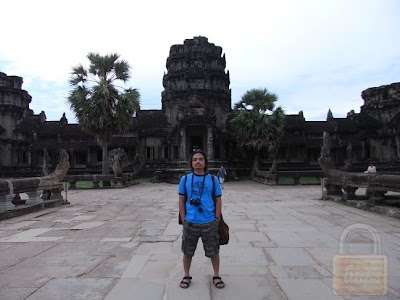 We walked the 350meters causeway towards the temple and along it; we saw some restoration works were currently being done. Beneath this causeway was a stretch of square-shaped man-made river canals that bordering the temple, built by Khmer people since Suryavarman era. You know how large is the whole size of Angkor Wat area? More than 200 acres! And the temple size itself? 1 square kilometer size! And that was why it was known as the “City Temple”. 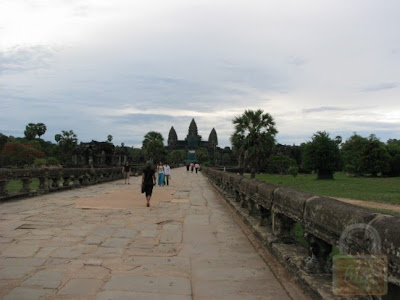 The sky still dimmed and there was no sign of sun, rising from the east. We reached the first tower entrance and snapped pictures. What a wonderful landscape, with ancient blocks of sandstone that was properly assembled like legos, with beautiful extensive decorations of Hindu epics carved on the wall, though some were gone with the wind and aging, we still amazed. 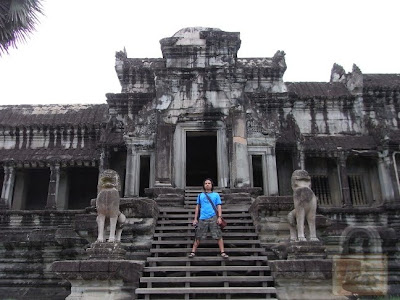 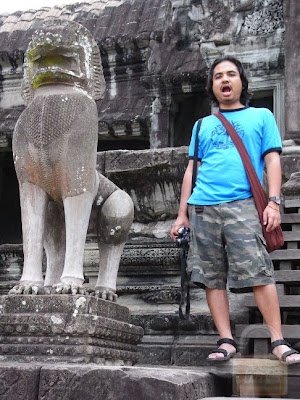 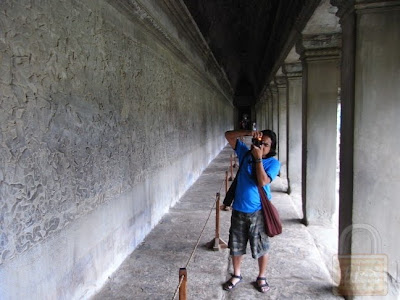 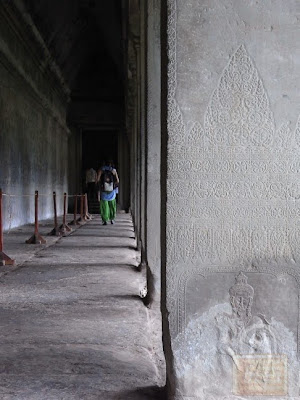 To the left side before entering the tower, there was a square-shaped pond that full with lotus and…frogs…hehehe! Around the pond was the noted spot to view the reflection during the sunrise, but as expected, the sun has failed all of sightseers, including us. Some has waited since 5am in the morning, but to those who were considered lucky like us, 5am was still nice to be in bed. (We came at 7am. Haha!) 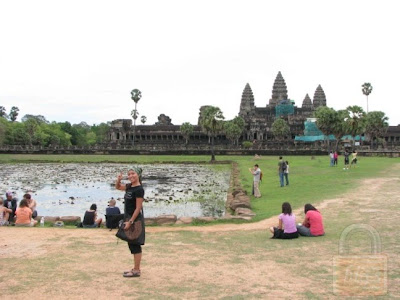 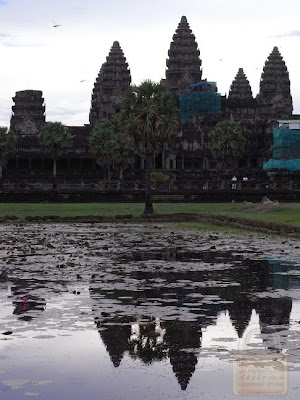 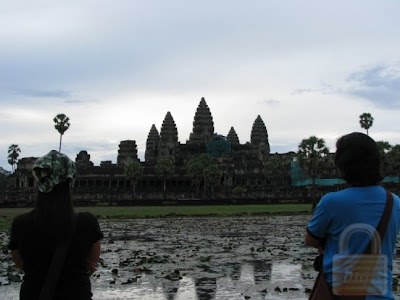 We later walked into the main temple and started to explore. The murals, the windows, the steps, were awesome. It was huge that you had to walk from end to end of the first corridor, for about half and hour. So, times 4 la to complete only the square-shaped corridors! 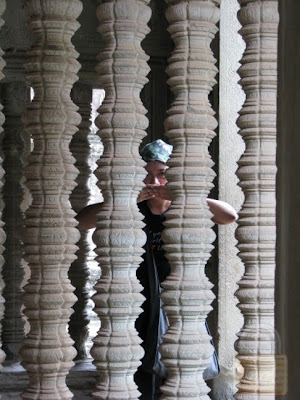 Similar to Kecak Dance in Bali, the front mural also told us how Rama tried to save his wife, Sita, with the help of the great monkey, Hanuman. We walked in deeper into the temple and saw few deep pool-shaped complete with steps and platforms that we guessed, were the King’s pool where he had fun with his concubines. Hehe! Too many king’s fairytale, but its true though, we saw the same number at ancient’s Jogjakarta palace, where the king also had the same pool in his palace…with naked concubines siap pilih ha nak yang mana, masuk bilik, skang! Hahaha! 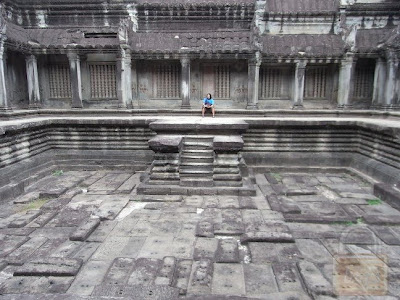 Seing again and again of apsara’s boobies made us wanted to snap more pictures with them. Hehe! This time, the focus was more ON the boobies, blurring out the subject, who was us. Hahaha! 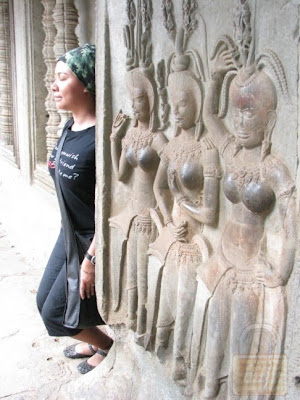 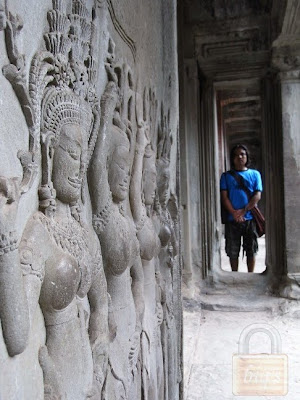 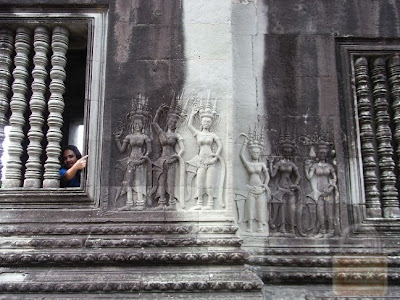 We later reached the inner side of the temple and again, it was a square-shaped open hall.

A man offering us burned “colok”.

I was wondering…should I or shouldn’t I…should I put the “colok” at the Buddha’s feet in order to respect his religion, or by doing that, I will make a sin to my religion… 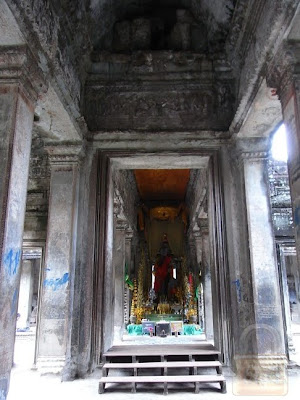 I passed by him and walked away…being rude by turning him down, speechless.

There were 4 cardinal points of lotus buds-shape towers at every corner of the main tower. They were all looked the same, but I know they represented different names and motives. Bakan, and the 4 Gods of Hindu, if I wasn’t mistaken. Each towers had a very steep vertical stairs for monks to say their prayers, but it was closed due to unsafe condition. Hubby asked me to pose as a trespasser who tried to climb the wooden gate. Hahaha! 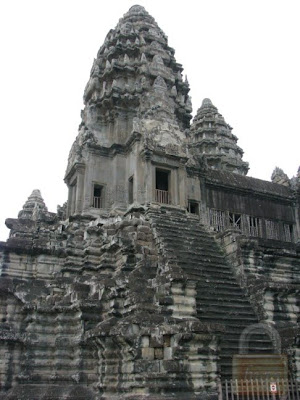 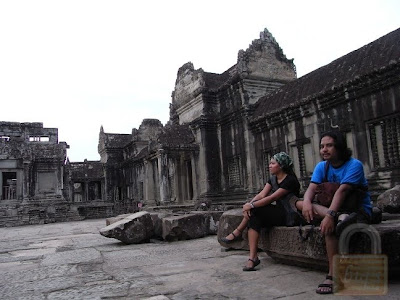 "U gi panjat pagar tu...I amik gambar...hahahaha!" and so this crazy wife did. 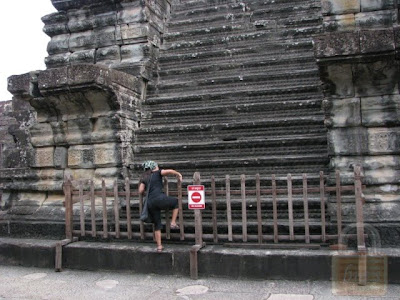 Hubby walked from the inside of covered terrace, while I walked from the outer side of uncovered terrace. Just to cover all areas, afraid of skipping something interesting. Gile kan? I in fact, took some pose of dancing like Wonder Girls in Nobody, laying down on the floor like a tantrum child, walking like a zombie, and walking like a helpless girl with a heavy bag. Stupid kan? Hahaha! But it was fun! 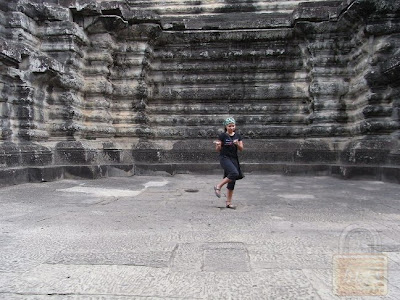 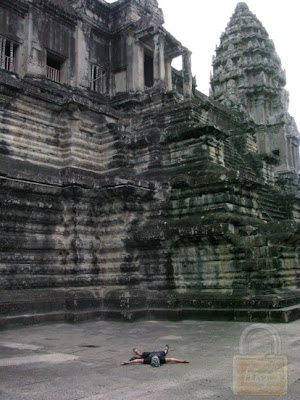 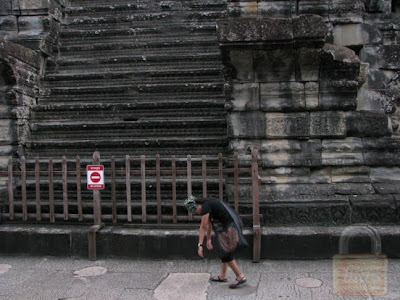 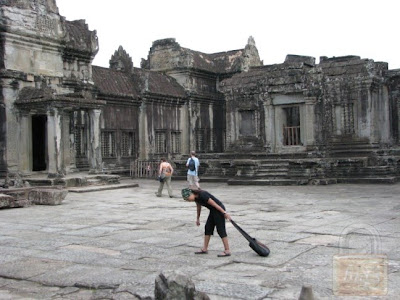 We later went inside the main tower, where a bigger Buddha sat. There was another man waited there.

I had no where to go, except walked towards him. 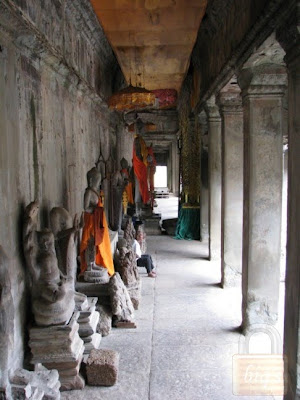 I faced down...and approached him.

“Sorry…I’m muselim…” I had to say mu-SE-lim coz that's how Khmer people speak.

He bowed his head and smile.

We had enough with the temple and made a move. I suddenly heard someone spoke in Bahasa and when I turned back, there were two guys and two girls busy snapping pictures of the temple. 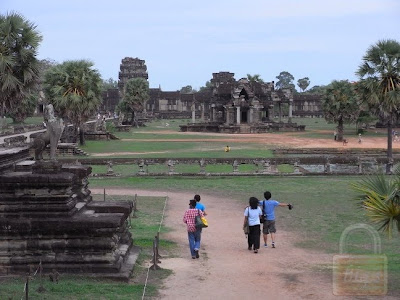 "Ape tu?" I questioned while looking at small heaps of clay. 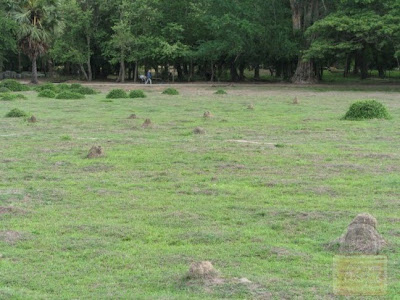 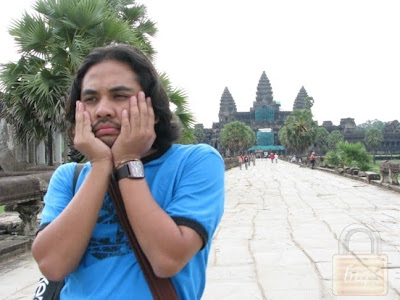 Unbuttoned by Biqque at 5:43 PM

This is about travel n vacation, travel-cambodia-siem reap