I didn’t know that he planned a so-called “recovery trip” for us, right after I miscarried my unborn child(s) last April. I was too depressed and dispirited due to our twins’ lost; that I didn’t bother to think who, what, where, when, and how. I was enormously tested, that drastically impacted my adult life. What could I do when part (two parts to be precise) of me was taken away in just a blink. And at that particular of time, I had foreseen, everything that came towards my path were meaningless and worthless.

But then I awakened up by a big huge bell, which rang loudly, to tell me that I still have my other half, my husband. I am grateful and thankful that he taught me to accept the fate, and have faith on Allah s.w.t. I was steered by him, to enjoy and cherish on what we have, not mourning on what we don’t have. And so he told me that we need a beautiful trip, a blissful and peaceful trip, just for the two of us.

It was Boracay. Boracay Island. A small island in Philippines that won the best island in the world, for the year of 2012.

“Borac means white cotton…bora means bubble…and bocay means white. Trust me, the name itself already makes you happy…” He smiled and hugged me.

NAHHHH…IN MY DREAM. He was in the middle of brushing his teeth when he told me about the trip. So un-romantic! Pfft!

Hubby had everything on paper. The accommodation, the return flight tickets, except for the so-called cruise tickets. I had no idea that this trip required us to fly flights, ride cruise and small boats, take tricycles and cabs, and other mode of yet-to-know-transports. It sounded fun, even more when he gave me the cruise’s link (2GO Travel http://travel.2go.com.ph/index.asp), where I saw one nice cruise with nice cabins. I checked the availability of the rooms and asked him to secure the “tourist cabin”.

The day after, he told me that he bought the “super value” offer! Ok, I THOUGHT, how bad it could be when the name itself was already “super”, right? So I went back to the URL to check it out! The minute I read the description of the “room”, INSTANTANEOUSLY I had my jaw dropped on the floor!

“AYANG, BUDGET CLASS WITH DOUBLE BED BUNKS??? IN NON AIR-CONDITION SECTION??? HOW AM I SUPPOSED TO ENJOY THE RECOVERY???”

“I swear the room (tourist cabin) was unavailable.” He stood up.

I showed him the website, with the said time, and the same date, “THEN WHAT THE HEAVEN IS THAT???” The room was still available.

He was defeated…by the cache of Chrome or Mozilla. “PHP875, it’s like RM60 per bed, by the way. It’s freaking cheap. Let just be local. Ok?”

“If I see cows or goats, even chickens or ducks on that vessel, I SWEAR, I’m gonna tie them down to your feet! You better sleep with them!” And I continued packing.

We reached LCCT quite early, since we had to “check-in” physically at the counter. Owh yes, another “surprise” from my dearly hubby, it wasn’t AirAsia this time. It was Zest Air, which recently launched and will be landed at Manila Airport instead of Clark. 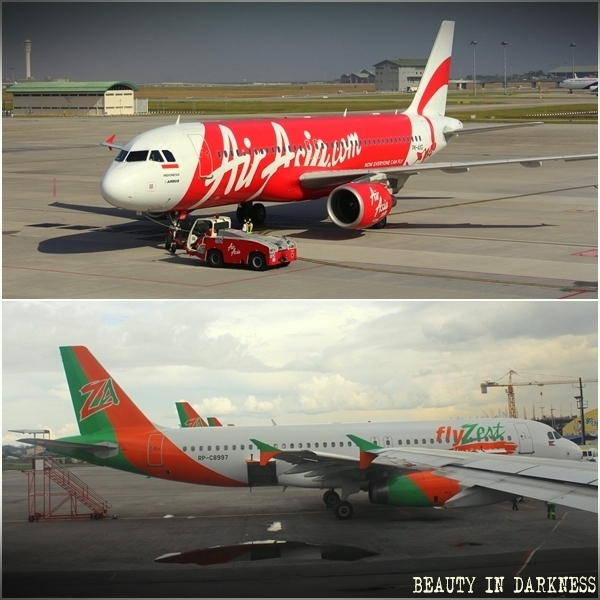 Diana, Jard, and Supermeng, all three of them landed at Clark. So none of them can give us the picture of flying with this service (Zest Air) and how Manila Airport would be like. And the most disturbing fact was, no heavy “in-flight food” served. So we prepared ourselves with Nasi Lemak Merry Brown. 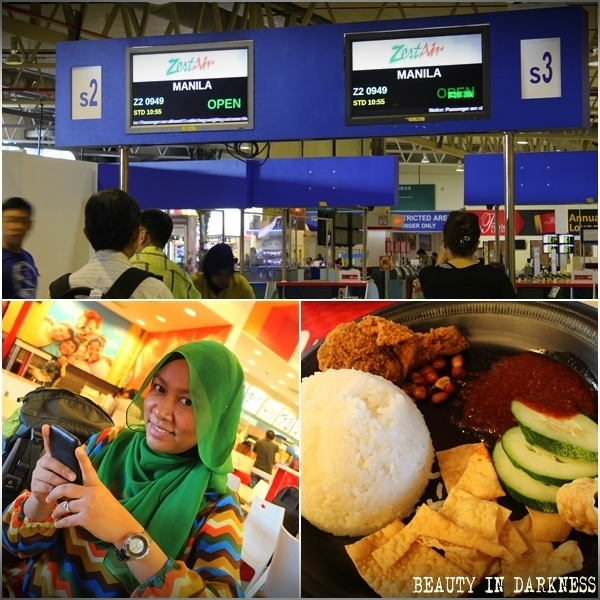 The moment we got boarded, I quickly inspected the emergency card and menu. For the first time in my life, I saw a real infant in life vest. And she’s Pinoy. Haha! (Zest Air is Philippines airlines.) The fun didn’t stop there. I checked on the menu and flipped back, A HUGE GOLDEN ROASTED PIG greeted me and said “Eat all you can!!!” Owh boy, I am SO sorry, I won’t eat you. 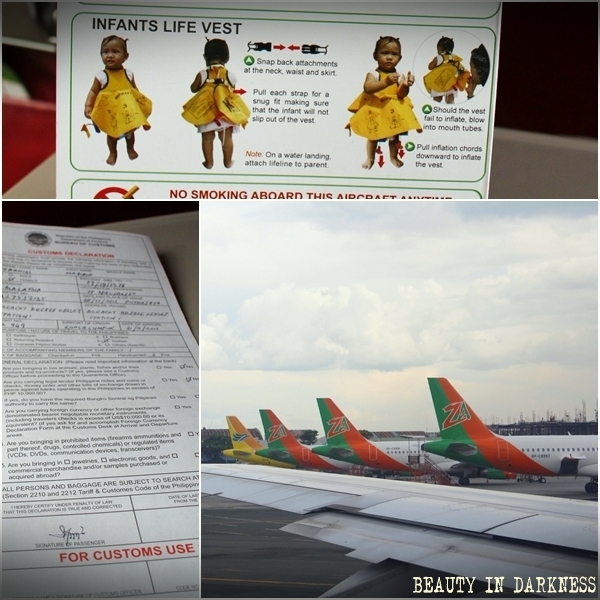 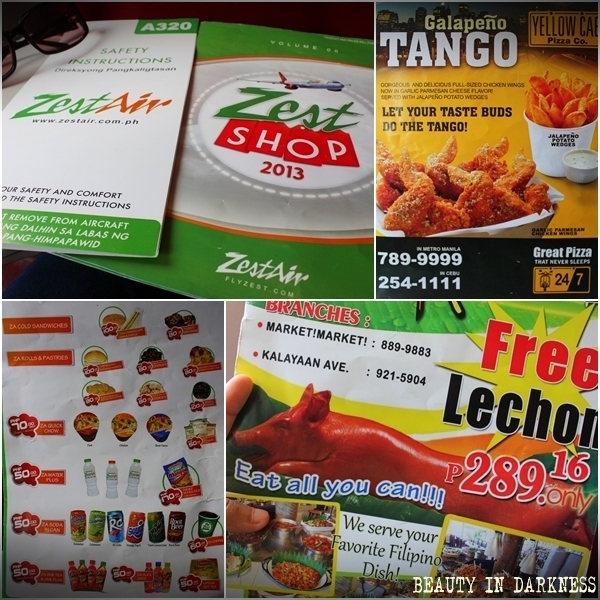 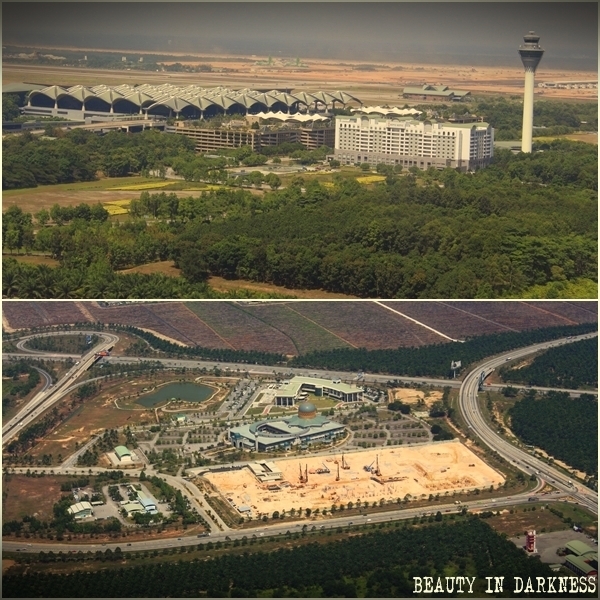 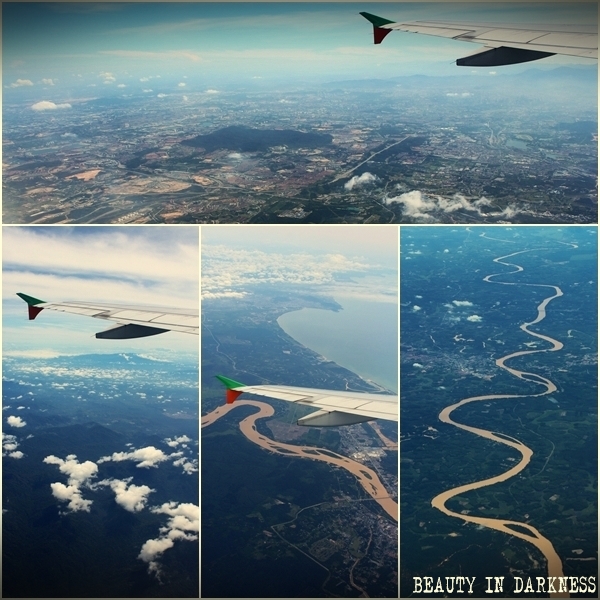 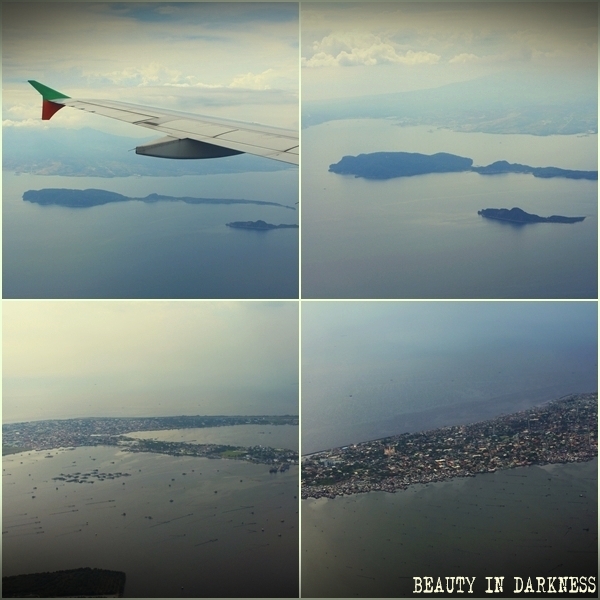 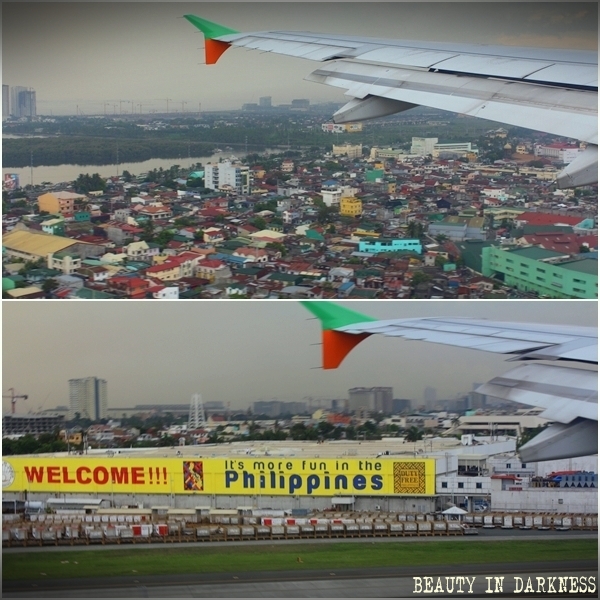 Once landed, suddenly, the captain announced that all passengers needed to be remained seated. The Immigration Department requested everyone to stay on-board while they settled few custom-related issues down there. Everyone was clueless and started to look out the windows. The process had wasted our 30 minutes precious time before we finally allowed to get off the plane.

Ok, listen. This is the best part.

When we got down, we saw the terminal was just few steps away, but we were still being ushered to get on the allocated bus. Again, everyone was clueless and wondered where we’ll be taking to, and how far would it be. Plus, the bus looked hideous! Serius weh, buruk bas tu, macam dalam cite Speed! True enough, the terminal that we saw right in front of the airbus just now, was THE terminal that we were heading to! The bus just made oneeeeeee bigggggg rounddddd around it and in a minute, DAH SAMPAI! BARU NAK DUDUK NIH!

Not only the bus was hideous, the terminal also hideous! Hahaha!

I saw domestic arrival sticker on the entrance door, when it supposed to be “international airport”. The queue was SUPER DUPER long and slow. 180 passengers were cramped in one medium-sized room, with two conventional check point counters available to serve us. TWO! 180 passengers with average 1.5 minutes per person that made two counters took 2 hours each!

While other passengers, including locals, started to make noise on the delay, I approached the lady officer at the entrance door.

“Excuse me, we have a cruise to catch. It takes 5 hours from Manila to Batangas…and we need to be hurry.”

“What time is your flight?” She asked me. Hoi aku cakap cruise, bukan flight.

“No, not flight…cruise…cruise in Batangas…?” I corrected her.

She then asked me to wait, as more and more passengers came to approached her. The queue line was messed up and few locals shouted to her. And guess what? We were last 10 men standing!

The process completed in 2 hours and we quickly rushed to the arrival door. There was no cab or shuttle that we could approached, so hubby walked back inside the arrival hall and asked one local lady, who happened to be my neighbor in the flight just now. She told us that we can either take cab and go to the main terminal or just catch a cab outside, but that would be much more expensive. We went out and saw one counter where few tourists were queuing at. While hubby was queuing, I asked one of the ladies at the counter, whether they have a service to Batangas. The lady called both of us and offered us a chair (yes, one plastic chair), while she did the cab calling. Wah, excellent! Most of the cabbies didn’t want to go to Batangas, for it was too far and no one will hire the cab on the way back to Manila. Anyhow, 5 minutes later, we got ourselves a cab, drove by an old man, around my dad’s age. The fee was PHP3000=RM220! 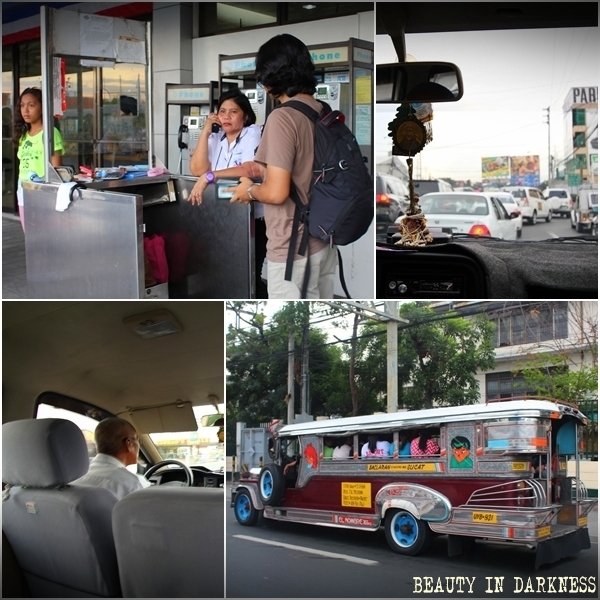 There’s no wrong with his driving technique as he was really careful and obedient to the road rules. But what bothered me was the bad traffic along the city road, which he could at least, tried to find his way thru!

“Ayoyo…what time la we can arrive there…”

“Uncle, we need to be there before 9PM. Fast, fast ya uncle.” I started to panic. That cruise was our only hope, coz one day, ONLY one cruise will go to Caticlan. Else, we have to overnight here and waste our time.

2 hours gone, and we still on the road to Batangas. Worst thing happened, it was getting darker and darker (no road lights, plainly DARK). Even worst, the uncle was short-sighted!! He was driving 60KM/H and kept on yawning every 10 minutes!! AH SUDAHHHH!

“What can we do?” Hubby asked for better suggestion.

“Hish. Maybe we can help him to read the signboard. He keeps on slowing down at every junction. He cannot see. Seriously.” Hubby moved closed to the front seat.

Three times. THREE TIMES, we had to say NOT THIS ONE, NOT HERE, NOPE, to the driver, every time he was slowing down. But the final junction was the right one, where we saw a board with Batangas Port at one of the corners. The road still dark and we followed the tourist bus. That was the BEST option that we had, at the moment.

The bus went to the other way instead. AND THIS UNCLE, DROVE US TO THE OTHER SIDE OF THE PORT! *nanges*

O...M...G...We should be at the terminal 4 hours prior to departure! Departure time was 9PM! And it was already 8.30PM! *jaw dropping* He dropped us at the wet market, where locals tried to haggle with us for tricycle! *jaw dropping even lower* The uncle said it was the fastest way to the terminal entrance. LIKE, SERIOUSLY? WET MARKET THAT ALREADY CLOSED? And we followed with no hesitation...selamatkah kitorang?

This is about travel n vacation, travel-philippines-boracay island, video

What a stressful trip on arrival at airport! I heard that this happens all over their country when system is concerned. My brother's maid told me these horror stories whenever she balik kampung yearly to a remote town like 8 hours 2-bus rides from Manila!

I am looking forward to your coming lovely photos!

Your hubby is such a great and comforting man. Pat his head for me!

twilight, the worst airport experience i ever had...but boracay island is worth to visit :) wait for my beach photo!