We decided to put our feet up before anything else. I rearranged the bed, took a shower, and watched TV. Ridz and Eny wanted to go back to Eny’s house since they left Haikal with Eny’s mom, but Mama disallowed them to go back, for they will be coming back to have dinner with us. So why bother go back and forth, moreover, knowing that yesterday they lost on the way back. Eny then came to our room to perform prayer and had a quick conversation with me. To my surprise, she performed her prayer with make-up on. Hmm…was that ok, anyone? Ok, I’m confused.

Since hubby and I wanted to try “lesehan”, which we didn’t have the chance back in 2008, Ridz decided to take us to one. But knowing Mama, she will DEFINITELY REJECTED this style. You have my 200 percent guarantee that she will NEVER EVER eat at “kaki lima” with flies and mosquitoes and cockroaches and rats, you name it, which at any seconds will show up. Hahaha! Well, hubby inherited that manner, but still, at acceptable degree.

“By cab…we take two cabs.” Eny suggested. She pulled over one cab, asked Wan, Abah, and Ridz to go first. She then called another cab, for whoever left, Eny, Mama, hubby, and I.

Who knows that the place was quite far from Malioboro! Argh! Lapar!

The one that Eny and Ridz brought us was the high end “lesehan”, with more or less the same style, but better approach. They provided normal tables and chairs. (Lesehan need you to sit on the floor, similar to Japanese style.) Warung Makan Cak Koting is a popular eating place in Jalan Dr. Sutomo that offers none other than noted Jogja dish, fried/grilled duck, or known as “bebek goreng”. Unlike other typical “lesehan” that open only at night, this restaurant opens from 10.00am till 11.00pm. 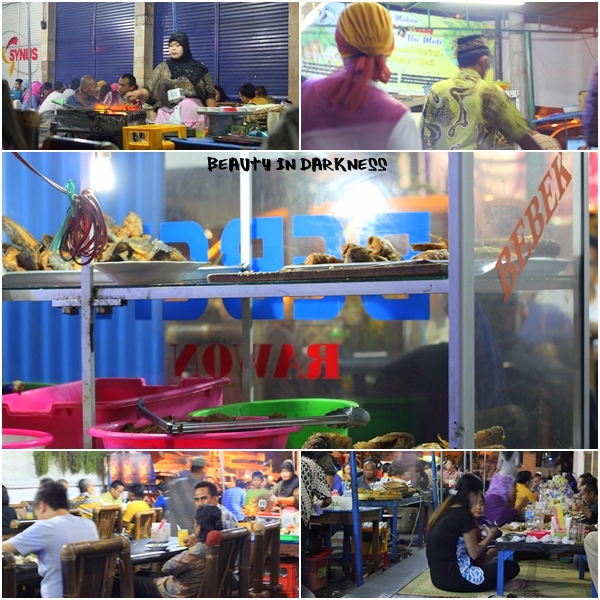 Since none of us eat duck (except for Eny), we ordered ‘lele goreng” (fried catfish). While waiting for the food to be served, I was called to the front side of the restaurant, where two ladies in rolled up sleeves, apron and head scarf, dok baek punya gelek. One hand at the back, while the other hand…minced huge amount of chilies! Adding to this, they put tomatoes, onions, garlics, tumeric paste, and a pinch of sugar and salt. WOW! An original “sambal goreng” I assumed. 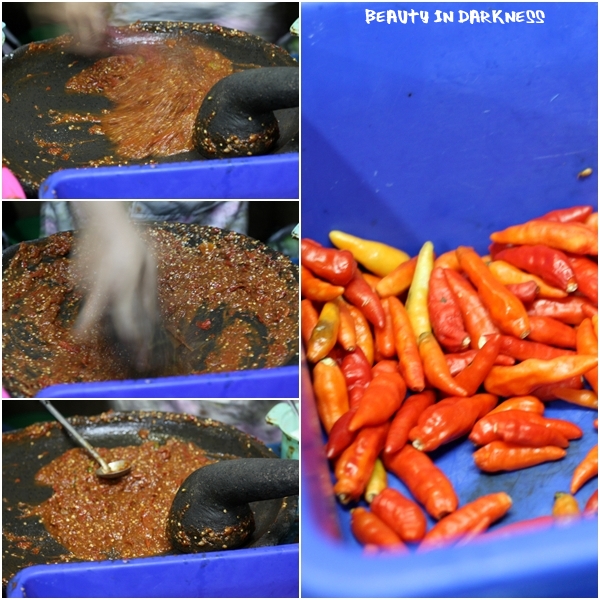 They did this routine NON-STOP, filling the small bowls before handed them to waitresses. I stood right in front of them for almost 10 minutes, went back to our table, took a camera, walked back to those ladies, and captured the scene. 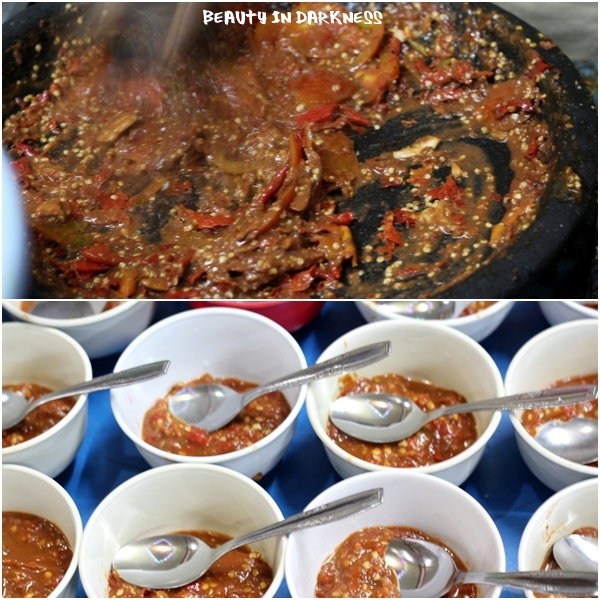 “Dari Malaysia ya mbak?” One of the ladies asked me whether I am Malaysian.

“Ya…” I quickly called Putri, asked her to stand next to me as bait, in case they want to shove me off. Hahaha! 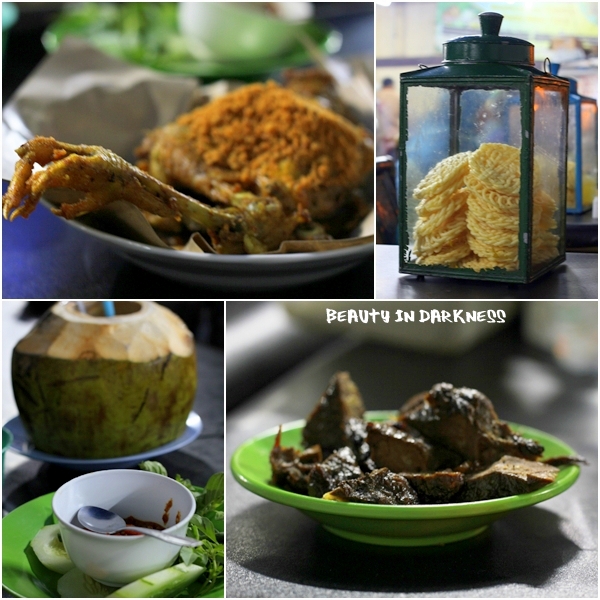 “What on earth is that?” Mama looked at two small melamine plates.

Pieces of cow lungs. Half grilled.

“Who ordered this?” She continued.

Guess what? Abah tried one, two, probably three tiny pieces of it, where he eventually forced Ridz and ME, to finish it! ME?? WHY ME?? Ok, I eat internal parts, but this one looked quite bizarre! Fine…a good menantu (daughter in law) will do what a good menantu suppose to do. Hahaha! I did try to eat it, not so funny taste la. Eatable but not finger licking good. Can try, but not to finish it. Ala, you guys try la later!

We then went back to the hotel and decided to have a quick shopping at Malioboro Street. I didn’t know where we got the energy to walk from one end to the other end of the street, with super packed crowds, and the smell of “keretek” Gudang Garam! Omg, with that kind of cigarettes, you gonna kill yourself! The smell was soooo bad! I knew that Mama cannot stand that smell, but she was following Eny from the back, and hell yeah, Eny walked like Speedy Gonzales! We lost her once! Abah, Wan, hubby and I finally stopped at one place and waited for them to come back. 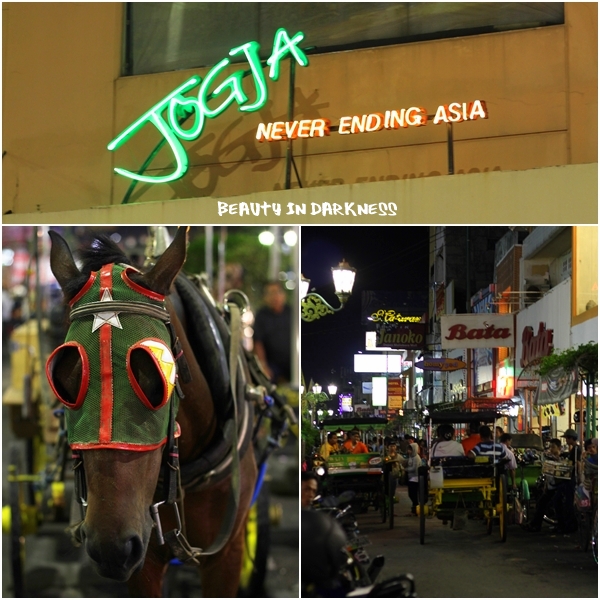 While waiting, Putri and I sat nearby the horse-carts. They kept on offering us but we didn’t bother to ride on. I tell you, expensive! I then, got myself a piece of blouse that I paid on my own. (Wah, bayar sendiri tau!) Eny then came back with Mama and Ridz, and I saw them having plastic bags on both hands. Kaboom! Eny told me that it was cheap but when I asked her the price, I swear that I can get cheaper than that! Hahaha! How la local also got that price…

Abah and Mama then decided to go back to hotel, Eny and Ridz went back to Eny’s house, while Wan, hubby and I, decided to have a REAL “lesehan”. At this time, Putri had a huge dilemma, to choose, who she wanted to be with. Grandpa, or Papa. She had to choose Papa, by force. Yeah, she cried coz she had to leave her boyfriend Grandpa.

When Abah and Mama ordered room service, we, opted for fast food. We went to KFC but the service sucked! We went to McD, but the queue was too long. We had no choice but to join the queue and get some food for tonight. After got our to-go food, we stopped at one “lesehan” (they are MANY “lesehan” along Malioboro street). We ordered “teh botol” Sosro (bottled jasmine tea) and chit-chat, before two “ngamen” (street singer) came and entertained us. I knew some song but some not, so I didn’t donate. Hehehe. No la. He left before we finished our drinks. Not our fault. Peace!

Indonesia's warung is really a good place to eat while won't burn a big hole of your wallet. I did ate in warung too when visited Bali. Will take this warung into my consideration when next time visit Jogjakarta.

You changed your header again! Which I love the way how you match your header with the colour of your blog background.

diana, exactly. u can try fried duck and tell us what it tastes ya?

hahaha...almost everyone like this kambing header! so cute huh? imported from NZ. suddenly green looks nice on my blog...and on me as well :D