We woke up the next day and getting ready for some shopping. Not me, it was Abah and Mama…and Eny. Pfft! Beforehand, we had our breakfast at the dining area. The food was far better than Cangkringan Villa. While waiting for Eny and Ridz to come and pick us up, I told hubby that I wanted to go to Jalan Malioboro, but hubby wasn’t in the mood to go out due to nature’s call. I wanted to get a t-shirt or blouse, to be worn the next day.

And so I walked out from the hotel and once I passed the gate, locals who with “beca” and “ojek” and you name it, started to persuade and bargain with me. I rejected nicely and crossed the road. Well, Jalan Malioboro is just across the street lah! I then spent almost 15 minutes before I went back to the hotel with nothing in my hands. I seriously cannot tahan la, so hot. CHEWAH! Belagak gile!

No lah. I was afraid that they gonna leave me.

Later, Eny and Ridz came and suggested to Abah and Mama to rent two horse carts, to move around town. I was like…“WHAT?? Does he know how much it’s going to cost us?” I whispered to hubby’s face.

Assuming Abah gonna pay for both carts, Eny started bargaining. She finally came up with a price of Rupiah120,000 = RM36, for one cart. Come on, we paid RM7 for one “beca” before. That’s your local price? Pfft! Hahaha!

Abah accepted. Fine. Hubby and I rode with Mama, Eny, Putri and Haikal, while Abah, Wan and Ridz in the other cart. The plan was to go around town, Taman Sari, Kraton, “dagadu/kaos” shop, “batik” shop, and few other places. 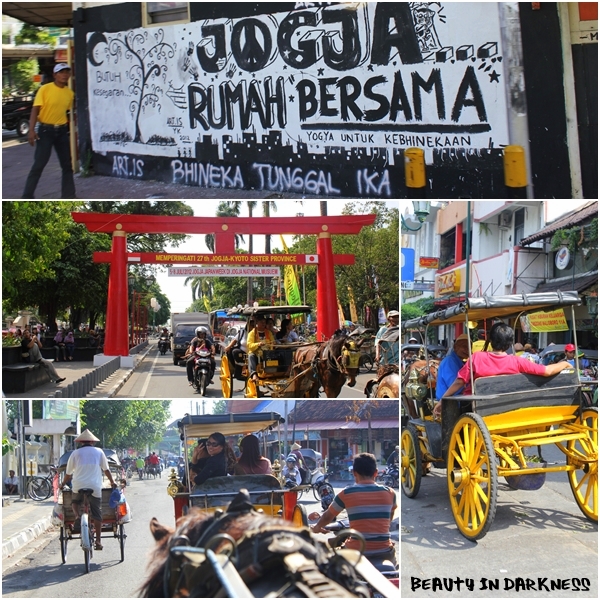 Hubby and I looked at each other and said “Ready to be ripped off? Hahaha!”

Well, we knew that this horse cart people will DEFINITELY, WITHOUT DOUBT, bring us to those ridiculous expensive shops. Trust me, or I’ll cut my finger! And guess what? The first “batik” shop that they brought us was one unit of bungalow stated “Rumah Batik something something” I couldn’t remember. When a shop has sofas/seaters, it must be expensive. Ok? 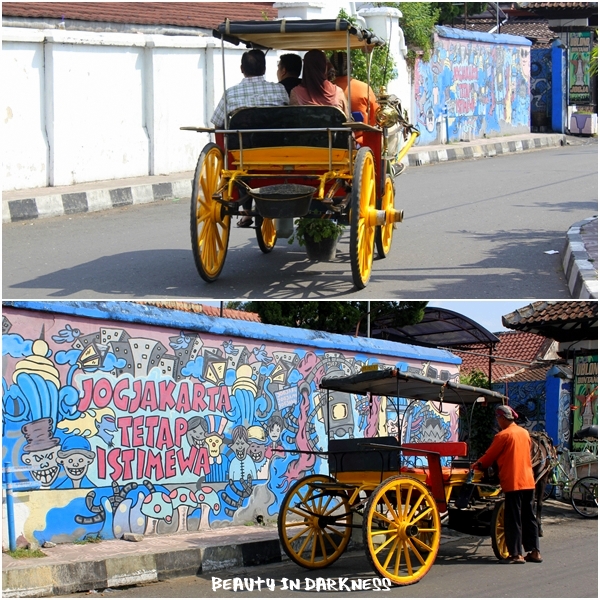 Wan, Hubby, and I waited outside, while Mama, Abah, Eny and Ridz went inside. I had no intention to get something for myself either. Hubby and I took Putri and walked towards those two horses and watched the master feeding them. “Dedak” (the food) was mixed up with water that turned out to be like porridge and smelled funny. While eating, one of the horses kept on peeing and pooping, and hell no, it was drastically hasty and nasty! Hahaha! 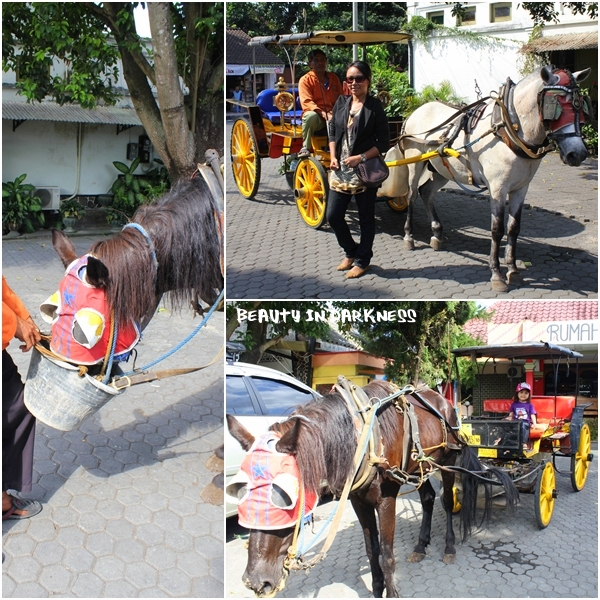 Almost an hour, Mama and Abah still in the so-called boutique. Omg, habis la kena kerat leher. I went in and checked out what’s going on. I saw Mama and Abah sat down with loads of “batik” around them. The helper kept on spreading after one and another and that made Mama lost her mind. While Mama lost her mind choosing what she wanted Abah to wear, Abah was more practical to choose what he wanted to have. Hahaha!

I walked around the shop and looked around. None fancied me. Then I saw Mama and Abah finally came out from one of the room and walked to the counter. And I saw Eny’s clothes as well! Niceeeeeeee!

All of us walked out from the shop, where one uncle in “kopiah” (head cover for man) stopped us. He showed Abah the Jogja-style “kopiah” and out of nowhere, Abah asked his three sons to pick one each! Zzzzz…hubby is not the type of wearing that kind of “kopiah” but he, anyhow, picked one. (And he didn’t wear it till date. Hahaha!)

The horse carts then brought us to another shop that sells t-shirts, or famously known as “dagadu” or “kaos” in Jogja. Everyone knows that Jogja like to be different and they like to create funny statements or drawings. To my surprise, that was the shop that we stopped back in 2008! Hubby and I laughed like hell and told Wan, this shop can cost you a bomb for a t-shirt! 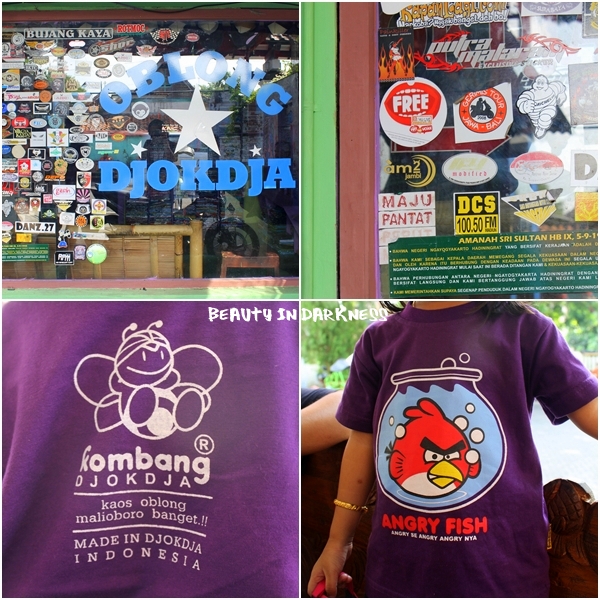 As expected, that was “not” Mama and Abah's playground. So we hopped back and continued riding, where we stopped at one “batik” warehouse. Ok. All of us were not in the mood to see all these and we decided to pass the show. Mannnnnn…how did I get into this kind of trap?! Hahaha!

We then passed by Taman Sari and Kraton and headed back to Jalan Malioboro. I was shocked! 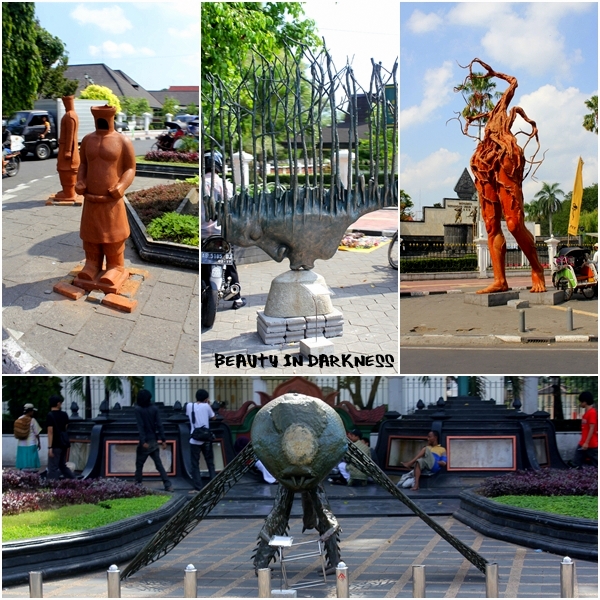 “Huh? Is that all?? Where’s Taman Sari?? Where’s Kraton??” Like I never been there lah kan! 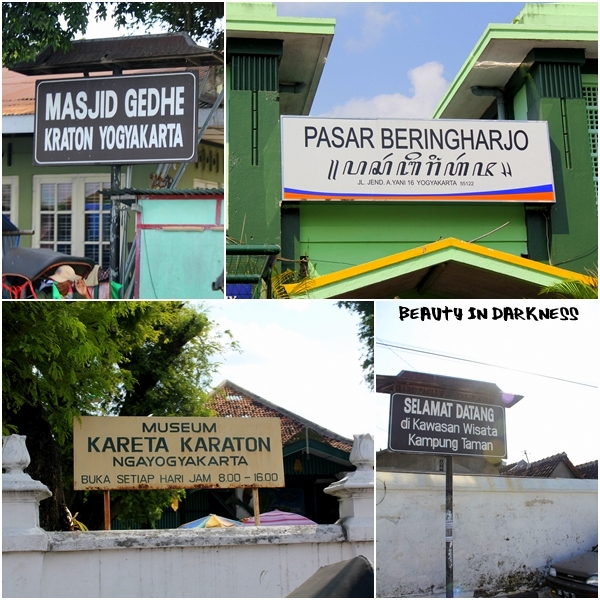 “We passed by those places just now, don’t you see it?” Hubby twisted the fact, which I 100% remembered that we SUPPOSED to stop at those two places, as per AGREED earlier.

Even worst, Rupiah120,000 was charged ONLY to go to that batik shop and warehouse? Kena tipu la lu labu. Hahaha! Well, I reserved my comment, and smiled.

Back in Jalan Malioboro, Mama and Abah went into another batik shop. I accompanied them while hubby busy taking photos along the road. What was the price range in this shop? Well, with Dato-sofa-type with tea served at the waiting area, you know how much it would cost you! I waited and waited, flipping the batik albums, while peeping at Abah who followed Mama that almost drowning under those rolls and rolls of batik. Hahaha!

Eny then came in and browsed batik blouses at railings. She tried and chose two (if I’m not wrongly exaggerated) while I FORCED myself to pick one. I might have gone crazy for choosing one batik blouse that I am OBVIOUSLY confident that I won’t be wearing it! BATIK JAWA SOMEMORE! Hahaha! Fine...I paid...on my own. 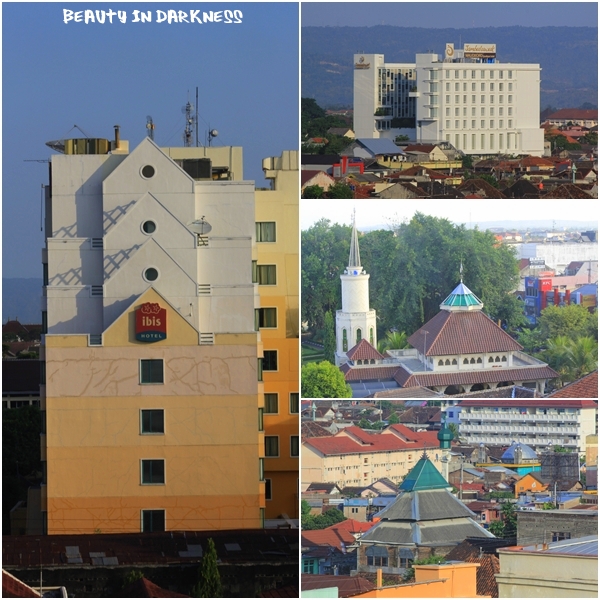 Aisha With The Apostrophe said...


Awesome information..
Keep writing and giving us an amazing information like this..


Awesome information..
Keep writing and giving us an amazing information like this..