We usually don’t repeat the same place but this time, we had too, to bridge my in-laws with the other side of family. I totally ignored all the details, as it was fully handled by hubby’s younger brother, right from the car rental, hotels, where to go, what to visit, and such. Mama, Abah, and Wan came directly from our hometown, while hubby and I, took our own sweet time on ERL ride, the morning after. Whilst, Ridz and Eny with their two kids overnight at Tune Hotels, the night before.

Though we were going to Jogja, we took a flight to Solo, instead. This was due to ridiculous ticket price that would cost my dad in law, a huge hole in his wallet. Well, he paid for this trip, so I didn’t bother much. Hahaha! The flight was smooth. Putri came to sit next to hubby and played with iPod, and I was quite surprised that she was well behaved along the flying time. Just like Aqilah. If I have a kid one day, I would force love him/her to act like this. Senang travel kan?!

We touched down at Adi Sumarmo International Airport around 4.00pm and Eny’s brother had waited us at the arrival. 7 adults and 2 kids in mini MPV was out of my expectation! Can you guys imagine, Mama, Eny, and I sat at the back seat, with Putri and Haikal on our laps? Hahaha! Baru indon sempit-sempit camni kan. We were told that the distance from Solo to Jogja was only 1 hour away, but reality bit! It was doubled up! 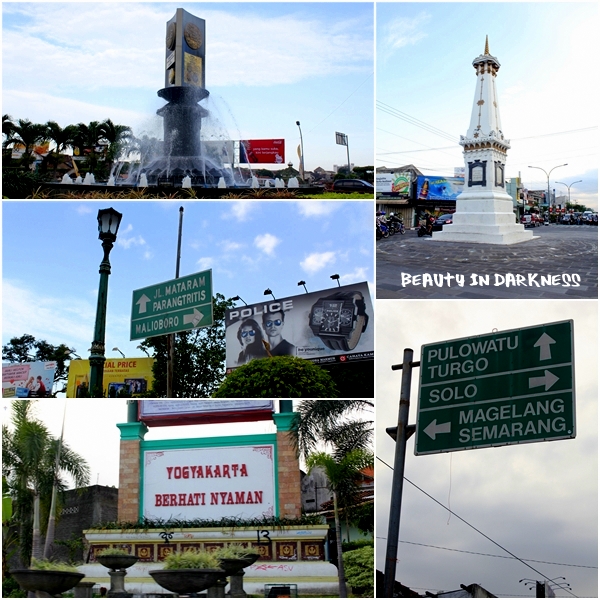 The frustration added when we couldn’t find any restaurant that well-matched to Mama’s ISO. Some restaurant did sell mix-rice with chicken heads (with half-closed eyes) hung at the glass window, and ants encircled around the fish curry bowl. Hahaha! Mama finally agreed to eat at one big Rumah Makan Padang (restaurant). Instead of being served with choices of food, we took the food on our own. Easy. I saw Mama didn’t enjoy the food, unlike Abah, who eagerly wanted to try pieces of cow lung. Quite tasty you know.

We then continued our journey where Ridz insisted to find a hotel in the town area (Malioboro) that eventually held us in super packed traffic! Eny then suggested a villa near Merapi, that was pretty close to her hometown. Hubby and I said nothing, since Abah paid for it. But being a good son and daughter in law, we told each other to chip in some money to cover the expenses, though Abah never requested for it.

It was already Maghrib when we reached Merapi area. We were forced to stop by at Eny’s parent’s house, since her mom and dad wanted to see Putri. Mama and I went in and did a toilet visit due to nature's call. The house was a typical village house that made of volcanic bricks, with tile-less kitchen floor. Yup, soil floor, straight from the mother nature. I got to know this when I rushed into the toilet and suddenly saw my two feet coated with black soil. Above all, the house was ok, and it was quite cold. No need a/c or fan.

Eny’s mom was super energetic, fun, and bubbly. She vivaciously spoke and laughed at the same time, whenever she talked. I looked at hubby and said "I tell you, she is obviously on laughing gas!" Hahaha! Meanwhile, her dad stood there silently and once in a while, smiling, in his songkok, Javanese batik shirt and batik sarong. A very typical Javanese. Eny’s sisters and brothers were not around, for they had gone back to their houses. Eny told us that her family did cook in big portions and call a feast for the whole village in welcoming us, but we turned up late. Like, seriously? Glamer kot! Well, her dad’s brother happened to be the ketua kampung, she said.

We excused ourselves and promised to come back tomorrow and straight to The Cangkringan Jogja Villas & Spa (click link to view hotel). I seriously didn’t expect that there is such an exclusive beautiful boutique hotel, built in this village, with no street lights, restaurants, entertainment and what not, around it. I bet we can bumped into pocong or zombie anytime coz the village was a total dark, except for this villa area! (I’ll tell you guys about this hotel later!) We were told that this hotel normally occupied with golfers, who golfing next to this place, Merapi Golf (click link to view hotel), that is noted as the place where you can golf at the top of Jogja. WOW! I was impressed. *cricket sound* We took 3 rooms, and the cost? I didn’t bother to ask, coz Abah paid for it. *cricket sound* 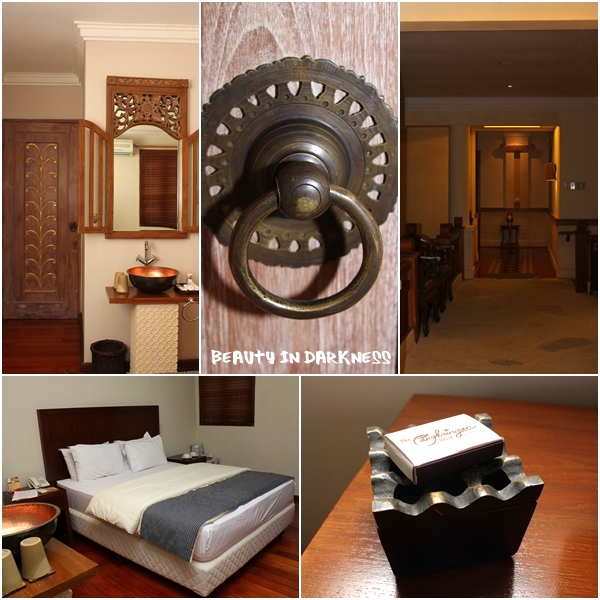 Ridz and Eny then went back to Eny’s parent’s house, which later, came back to the villa to take us out for dinner. Again, we were looking at a place that must well-matched to Mama’s ISO. So, they took us to this one exclusive eating place, The Waroeng Raminten at Jalan Kaliurang, that was an hour journey from the villa! OMG! So far meh? I must admit that the restaurant served delicious food but what’s wrong with that super super super super super hot sambal? Why I repeated five times? It was super hot, even my dad in law who is a champion in eating sambal, CANNOT handle it! All of us ate in tears! Yes, we ate, it was a mouth-watering dish, but we cried coz it was ridiculously hot! But worth a rupiah, coz it was on us. 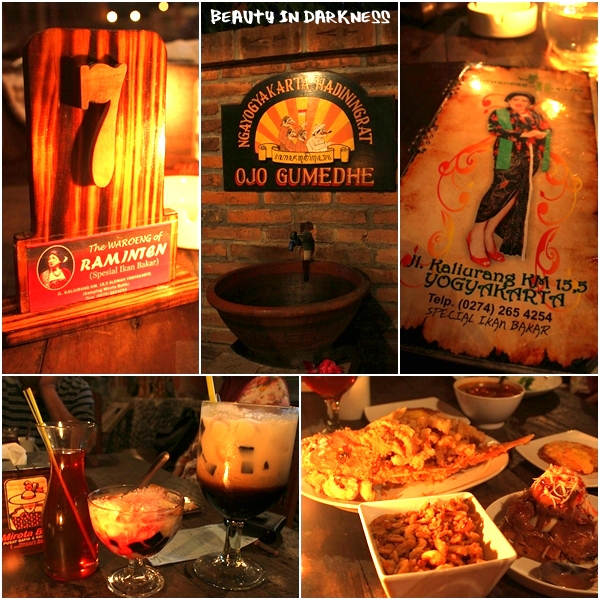 The resto ambiance was Balinese enough to me, with weird statues at all corners, old antique spooky photos of Javanese fat-middle-aged lady (owner maybe), angklung sounds with Balinese instrumental song played at the background, dimmed light, I can say that almost a melancholic feeling. The fun part was where they caught fishes from unseen pond down there, put it in a net, walked in between visitor’s table, straight into the kitchen, and later came out, the fish ended up becoming our dishes. Hahaha! But it was delicious. Ok la. 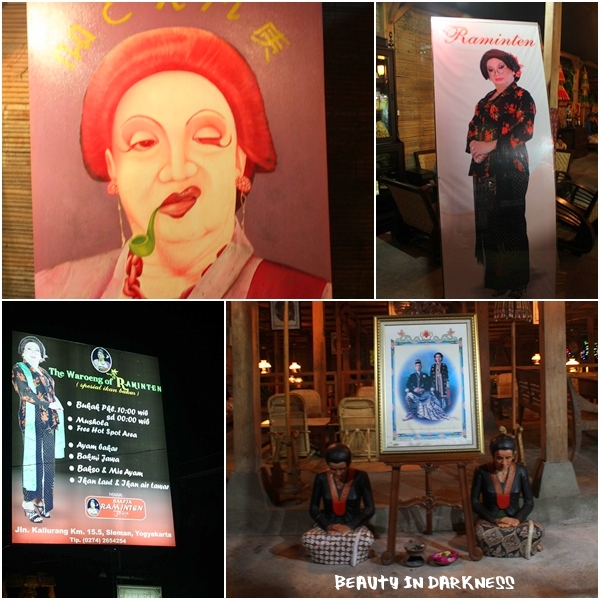 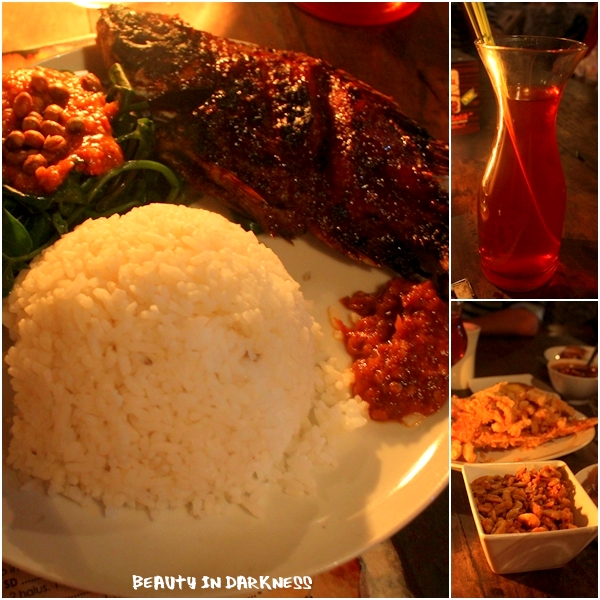 We went back to the villa and along the way, we experienced some awkward moment when the rented car was equipped with dangdut karaoke dvd. Putri was looking at the vidclip where once in a while, Abah had to cover her eyes from looking at those 18sx actions. Hahaha! Back in the villa, we ended the night on a comfy bed, lazing and talking, thinking how Abah going to communicate with Eny’s dad tomorrow. Will it be like duck and chicken? Cute! 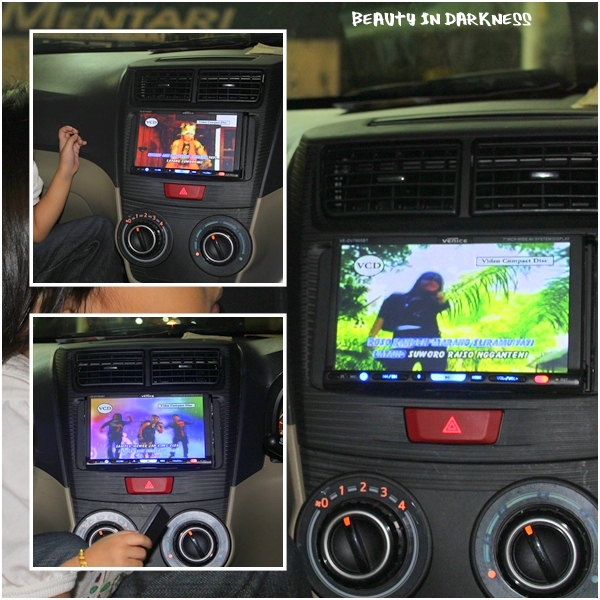 Unbuttoned by Biqque at 2:55 PM

This is about foods, travel n vacation, travel-indonesia-jogjakarta

love the villa, i stayed at a guesthouse the last time. this one abit fancy schmancy tho.

lily, wait for next blog, something spooky about this villa! hahaha!