Again, I woke up a bit late due to “lepak” session last night. Two days before, it was up till 2am. Last night, it was up to 3pm! Crazy!

Since there was no more snorkeling for final day, we were forced to take bath before we had our breakfast. The mood changed in view of the fact that we will be going back to KL and face the cruel world. Clearly seen, the weather was gloomy and depressing, as if it was unbearable to let us went away from the island. 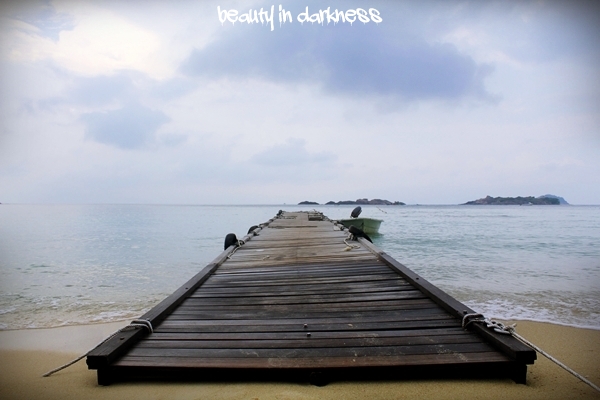 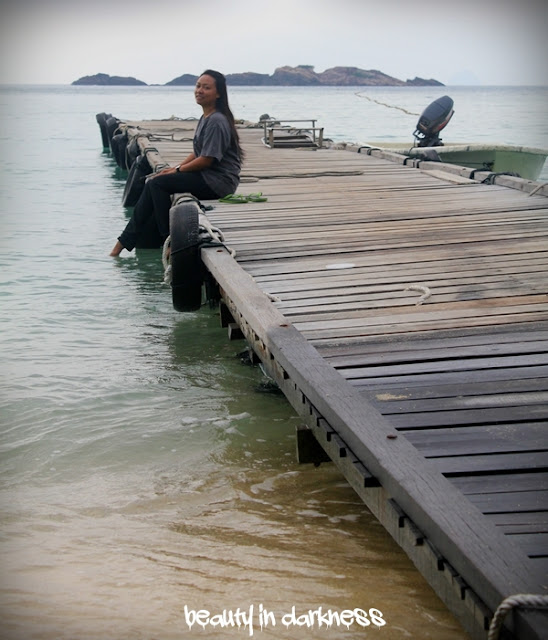 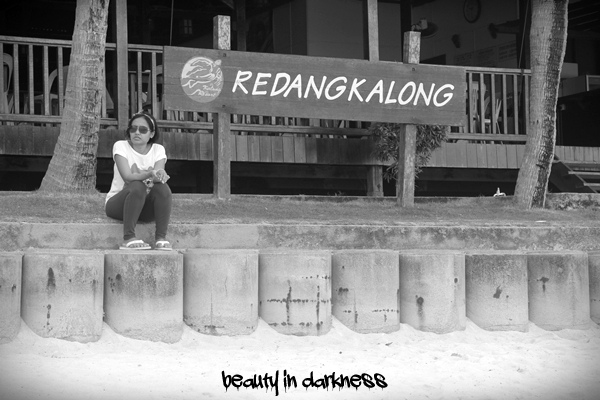 The vinegar thingy had helped hubby a lot. The swell went away and left no mark at all. Thank god. Hubby then can walk and run without any pain to bear. So we walked to the jetty and snapped few pictures with hubby and Suci as the subject. 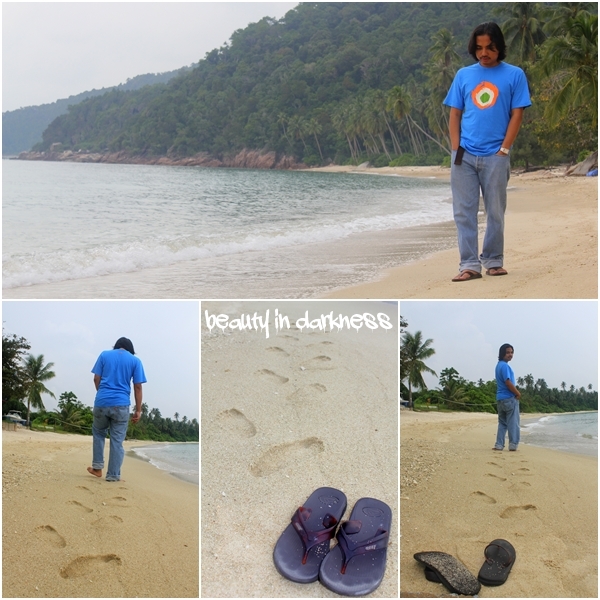 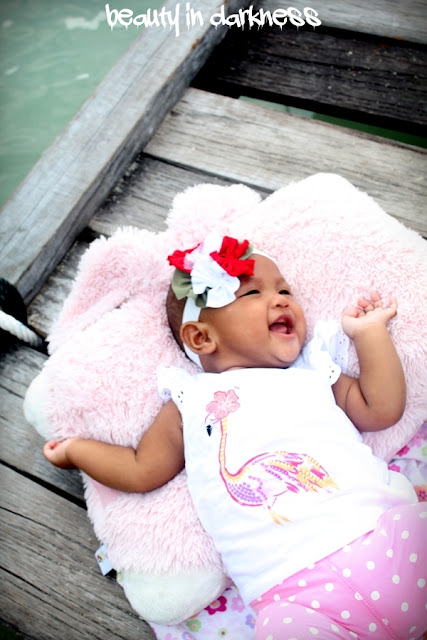 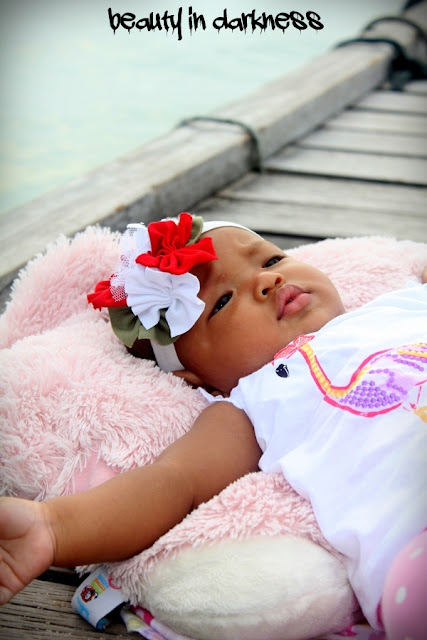 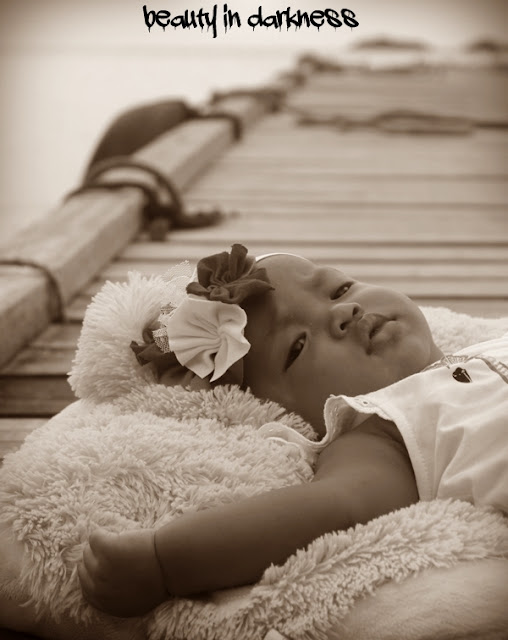 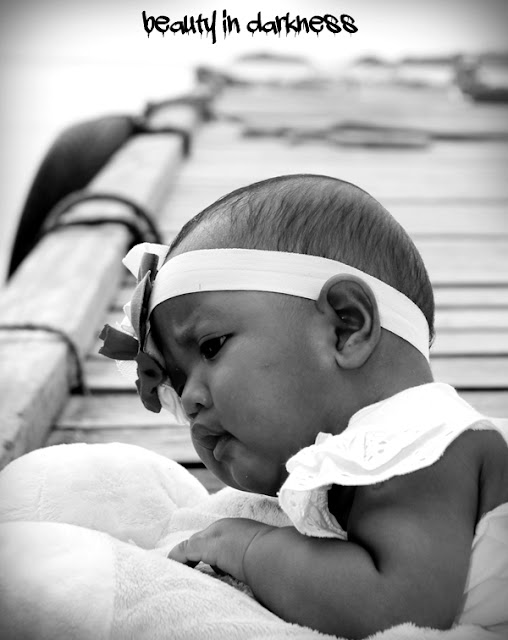 The rain started to drizzle. The hotel owner, AB Lee, advised us to rush into the boat, before it started raining heavily, and before the wave got wilder. This time, all bags were under the roof.

While riding on the bumpiness boat, we did twice of Mexican wave. It was cute to see it captured in Dan’s video. (Click link at the end of the post.)

The rain stopped once we reached the Merang jetty. While waiting for another minibus/van, some of us went for quick shopping. Dan, Byya, Fatt, and I, bought ourselves Redang/Dive t-shirts, while Kak Anash went crazy and bought ALL turtle keychains! Hahaha!

Once the van arrived, I quickly dealt with the abang driver, to get us to Pasar Payang, ICT (“ikan celop tepong”), and the best “losong” stall. Instead of free land transfer straight to bus station/airport, we agreed to pay RM50 to that abang, to bring us to these places.

On the way to Redang Kalong office, the Chinese uncle (driver) then drove to one “keropok lekor” stall. He told us that this stall “do business not for untung one”. Hahaha! Ya right! That makcik should have loved us very much, since we bought all her “losong”. 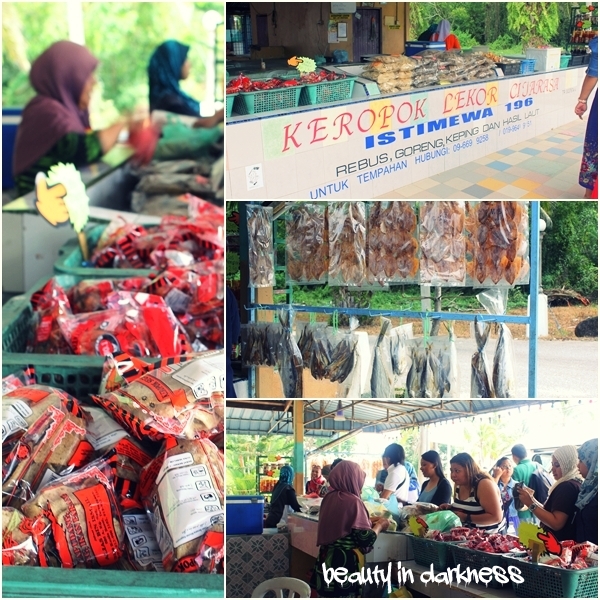 We then stopped at Redang Kalong office and left our bags. We squeezed 11 of us in a van, while Kak Anash called a ride from her local office, to drive another 3 of us. The driver left us at Pasar Payang and we quickly had window shopping. Well, those batik, pelikat, sampin, were too expensive lah! So we ended up having light lunch at one of the foodcourt. 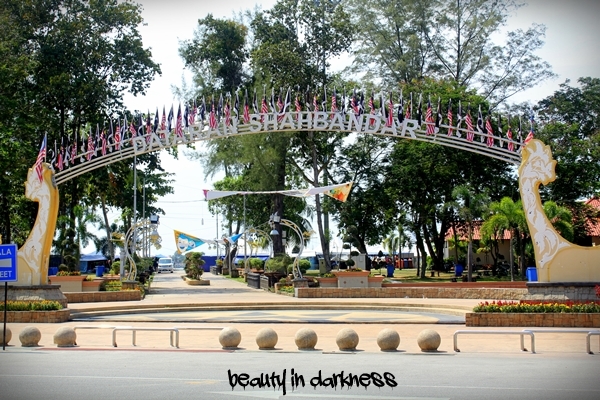 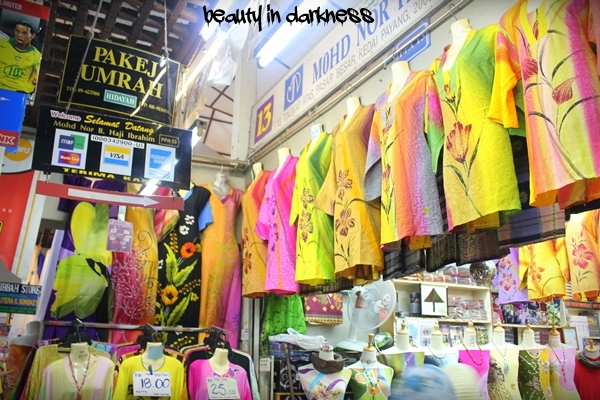 We were told to get back to Redang Kalong office by 3pm. So by 2.30pm, we gathered and walked back to the designated place. IN HOT WEATHER! EVEN HOTTER THAN SNORKELING TIME! Argh! 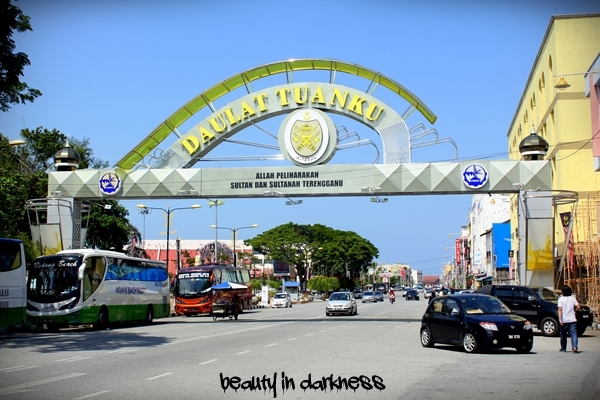 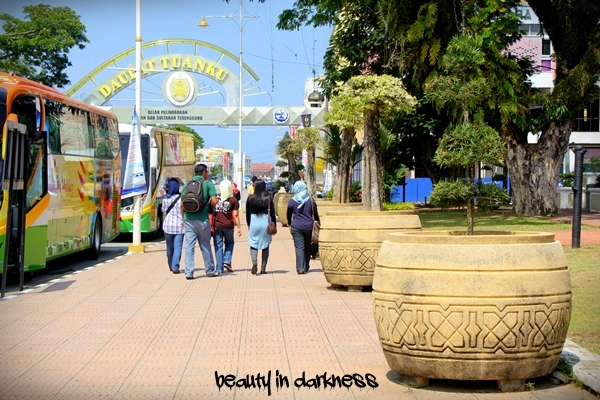 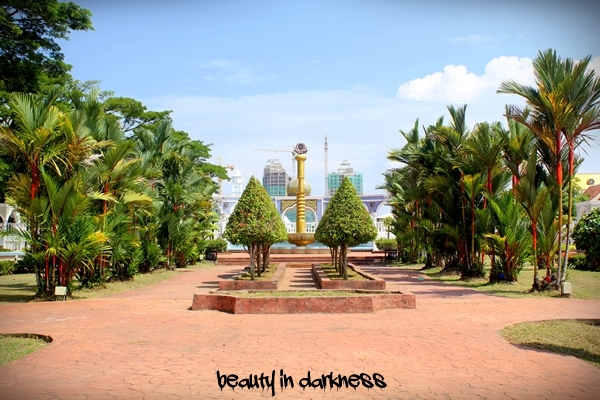 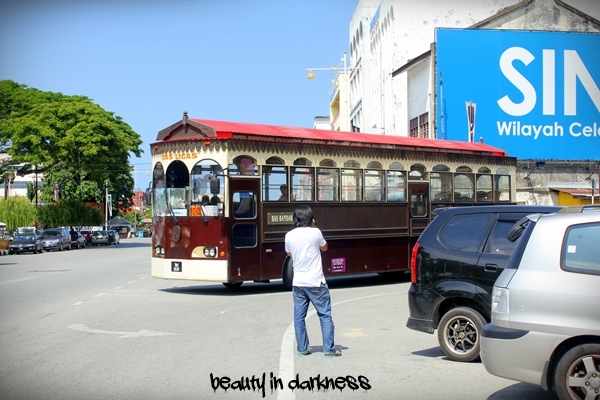 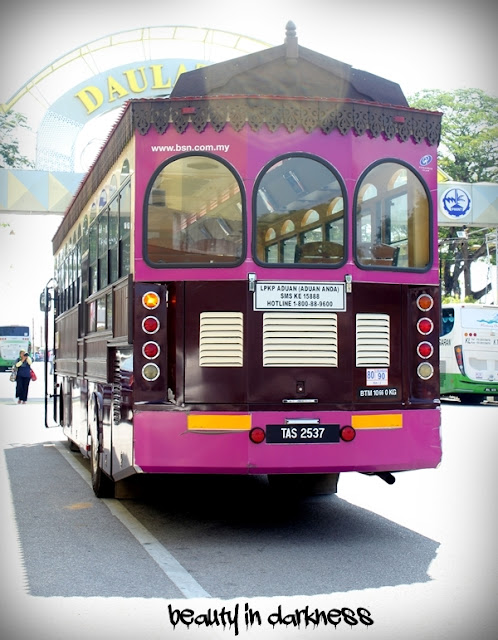 ICT was located just before the airport, so we took our sweet time to eat. All seafoods were placed in a plate, according to its price. I grabbed two plates with one crab on it, and I was pretty darn sure that I heard that kakak said, it was RM5 per plate. Wow, its affordable! WHO KNOWS, when I paid for my food, the total was RM25!! Pfft!! Fine…I paid. 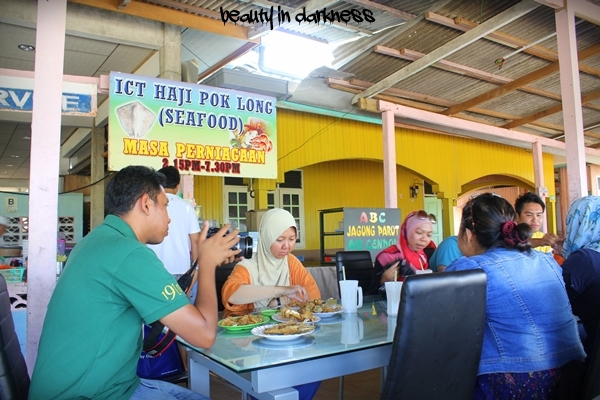 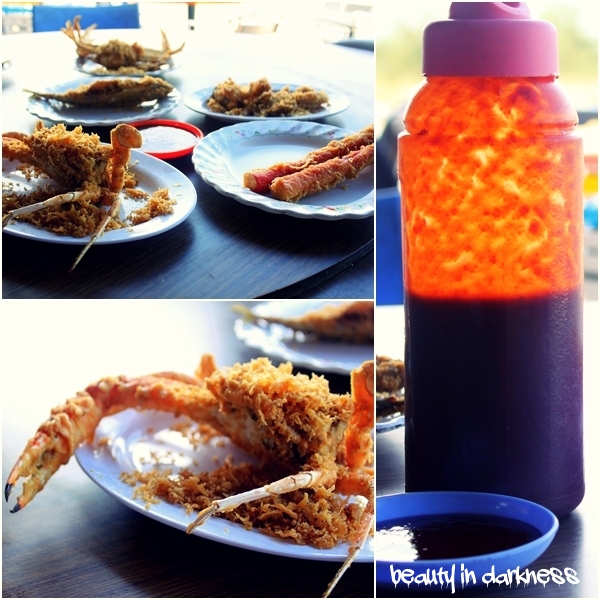 We bye-bye Kak Anash, MasZuber, Dan, and Skin’s family, as we headed to the airport. Aside Skin’s family who drove back to KL, Kak Anash and Dan flew back via Firefly, while MasZuber and her sisters took a bus ride. 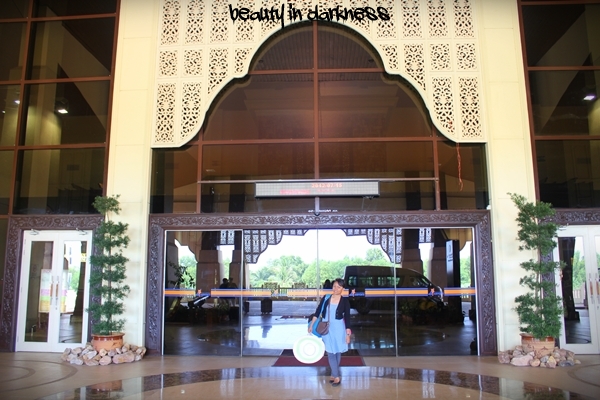 After quick jamak, we went into the departure hall, where Fatt’s souvenir (from Danny/John) was detained. A pair of steel chopstick from Korea! Like…huh? Was that a weapon to you? Okay, I rephrased. Was Fatt’s face look like terrorist? Hahaha! 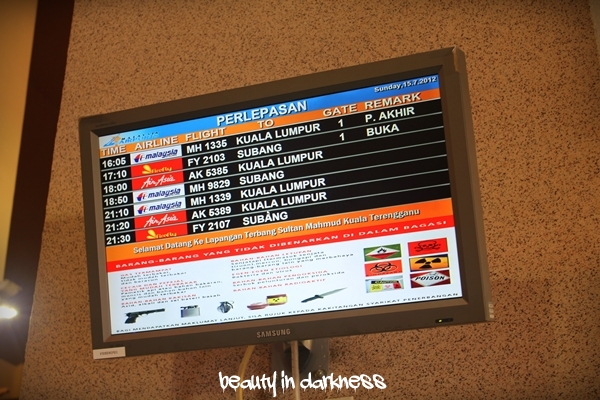 To #TravelholicAwesome, BIG THANKS for the memorable trip, guys! USS was our first, Taiping was our second, Redang was our third. More to come? YUP! So don't stop counting!

This is about travel n vacation, travel-malaysia-redang

The bus is so unique and funny! I hope your hubby's swelling foot has recovered. Once I got stung on my ear by a bee while trekking the jungle at night. Whole night my right face was swelling and my ear was buzzing bees in extreme pain! I nearly turned gila and mengamuk! LOL.. I rather kena stung on my foot! Ha ha..

Suci is such a cutieee :)