As far as I can remember, Redang trip was originally initiated by Fatt, a year ago, which later, was fully taken over by MasZuber as the organizer, since she knew pretty well on the island, particularly Redang Kalong. The beauty of this group trip started when the whole gang members of TravelholicAwesome agreed to be part of this event, except for Dr. Shahrule who was called to save people’s life.

The whole idea was to get together and have fun. Period. That was where we came out with a new Blackout Day with a tagline “Santai Bersama Retis” since we thought we are one. The fun added when our Mr.President Danny/John “killing us softly” in his crazy theme where we are needed to be in red, white, and navy blue attire. And so we agreed.

It was a 3days 2night getaway at Redang Kalong, a worthy package that MasZuber grabbed during Matta Fair where we booked 3 couple rooms (RM345 per pax) and 2 sharing rooms for boys and girls (RM318 per pax). We departed on the same day (Thursday) but we took separate buses due to our locations. Both Na and I decided to get a comfy bus for each group with 1+2 seats in a row, but I proudly declared that my bus, Adik Beradik, was far better, faster, and comfortable, due to its new condition, technology, system, and what not. 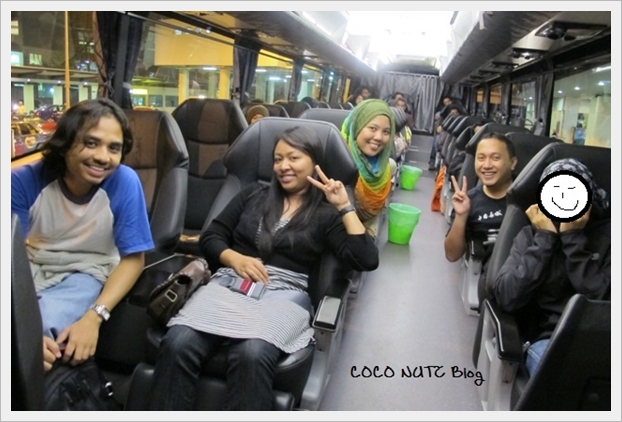 It has been 15 years since I rode my last express bus ride, and being “brain-contaminated” with countless fatal bus accident over the news, my phobia on taking bus ride has piled up. I forced myself to get the front seat, right behind the bus driver, just to ensure that the bus driver won’t fall asleep. I told hubby that I don’t mind singing or jumping the whole way up to Kuala Terengganu, just to keep the bus driver wide awake.

One thing that I couldn’t tolerate was the “everest-cold” air condition! I cannot tahan! Morever, looking at Fatt who was totally covered up in batik sarong, Janggel in pelikat sarong, when I had nothing to show off, I quickly took out my telekung and wrapped my whole body like pocong! (Tanak kalah!) Hahaha!

I constantly texting Na while Janggel texting Danny/John to update our gossip/location. Clearly our Adik Beradik bus was merrier/ahead of their’s. We then stopped at RnR Temerloh for quick refreshment, changed driver, and continued our journey.

We arrived at Kuala Terengganu Bus Station at 5.00am and ate “nasik lemak cop biru” while waiting for other group to arrive. They reached the bus station at 6.00am and finally, TravelholicAwesome united as one, with an additional of guest blogger, Paie, that was invited by Lily in the replacement of Wahidah, who earlier replacing Fatt’s friend.

After performed Subuh prayer, we waited for Redang Kalong’s van that was arranged to pick us up. While return boat transfer was included in the package, return land transfer was chargeable for RM30 per pax, regardless from/to bus station or airport. We were divided into two vans, which later we found that the other van went to Chinatown for photo sessions (thanks to Uncle Cina driver), while the other van got into BIG drama with the Malay driver! My group ended up waiting for the other group at Merang Jetty, for almost an hour!

Thanks to street vendors. I had no choice but to get myself a pair of beach pants and beach hat (recommended and chose by Fatt), while Fatt get herself couples of fridge magnets and thongs. 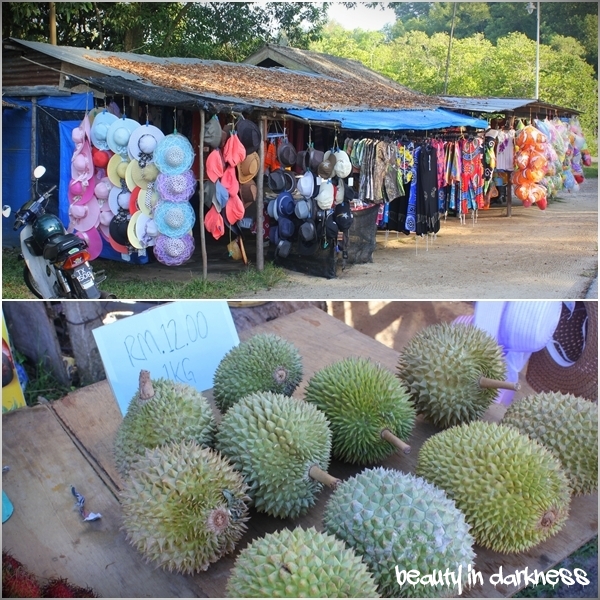 When everyone was there (at Merang Jetty), we met the owner of Redang Kalong and had a quick introduction while his boys loaded in our bags on the boat. On the boat? Exactly! All big bags were arranged nicely (without been tied up) on the boat, which we thought can be bounced out into the sea any time soon! 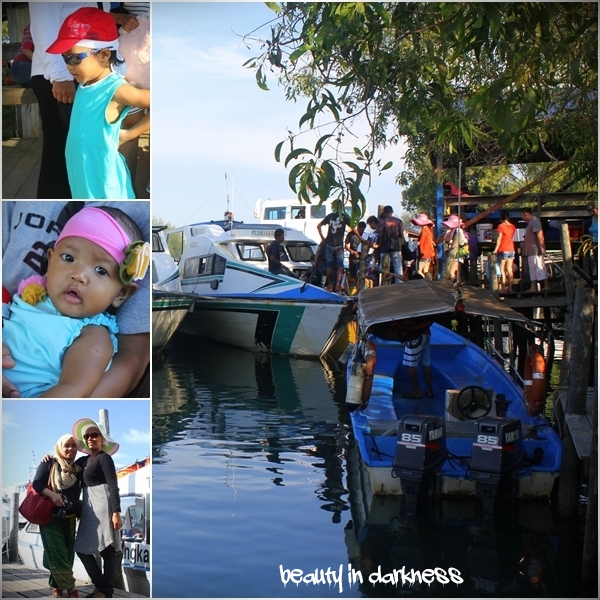 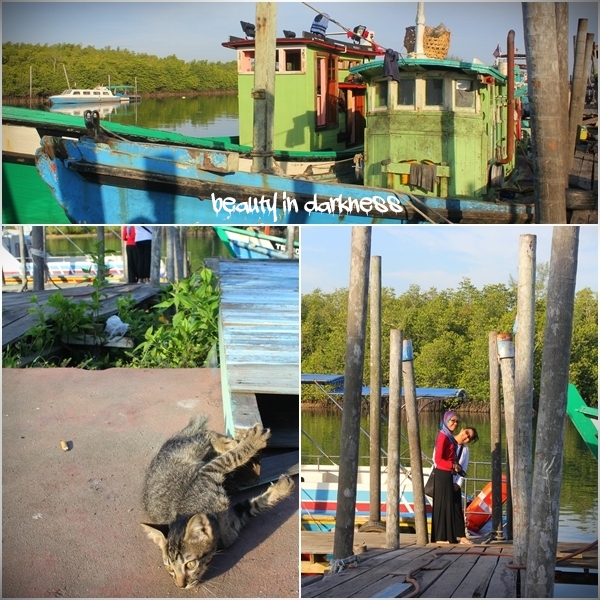 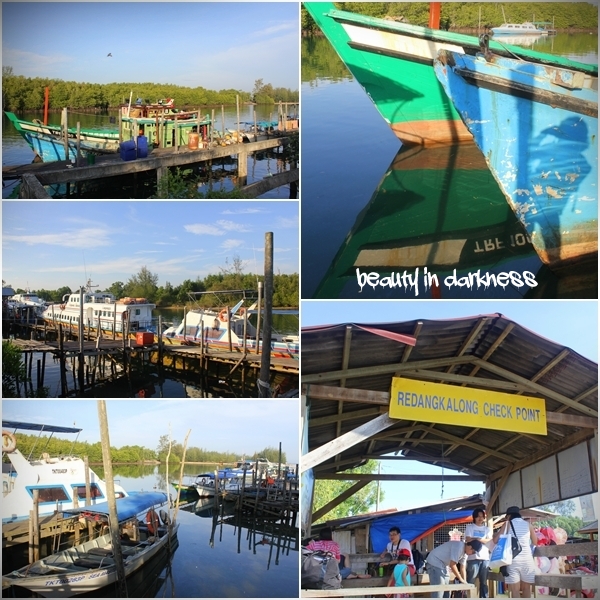 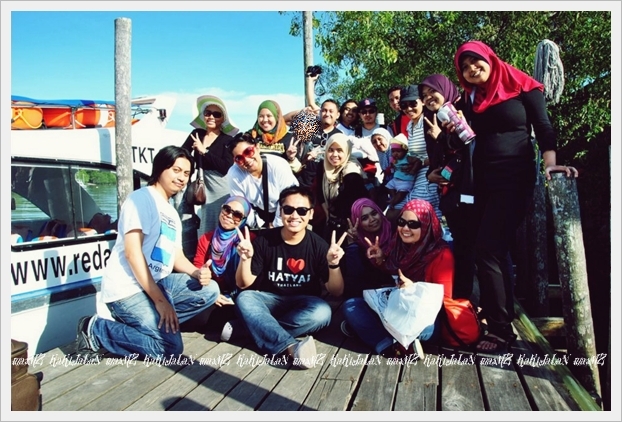 Our prediction mishit when no bags fell into the sea, though the boat bounced hundred times. Kudos to “pakcik driver” who seemed so effortless in steering the boat. Well, he didn’t drive the boat yesterday right? “Islanders” know island very well, said my dad. 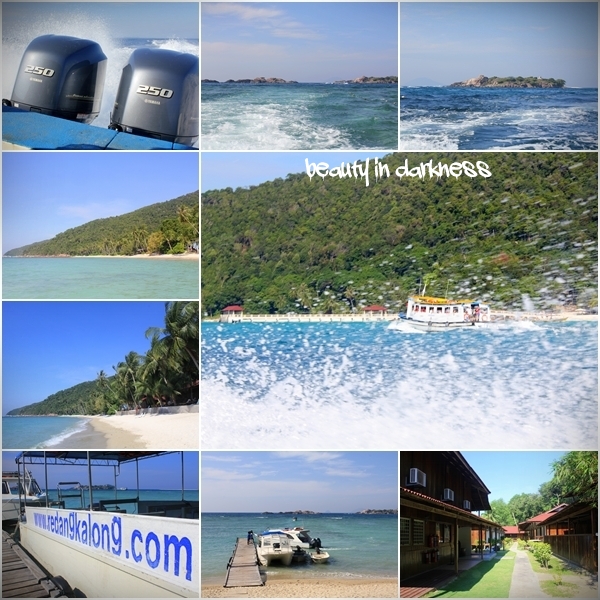 We couldn’t stop “ohhh” and “ahhh” along the way, especially when there was a color changed of the water. From blue to turquoise to green, we couldn’t guess what made the water turned out that way. Not until we snorkled! 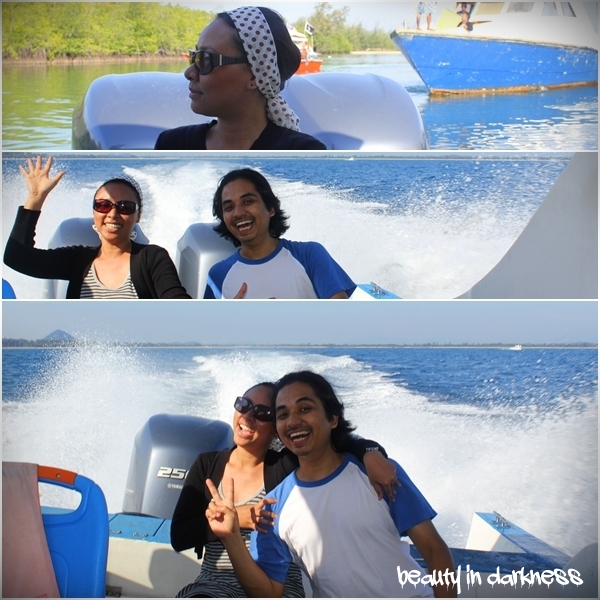 It was a sunny bright day and each of us started to get crazy coz we wanted to swim so badly. I looked at myself and sighed…I haven’t swim yet, and I already had a welcome suntanned. Great! 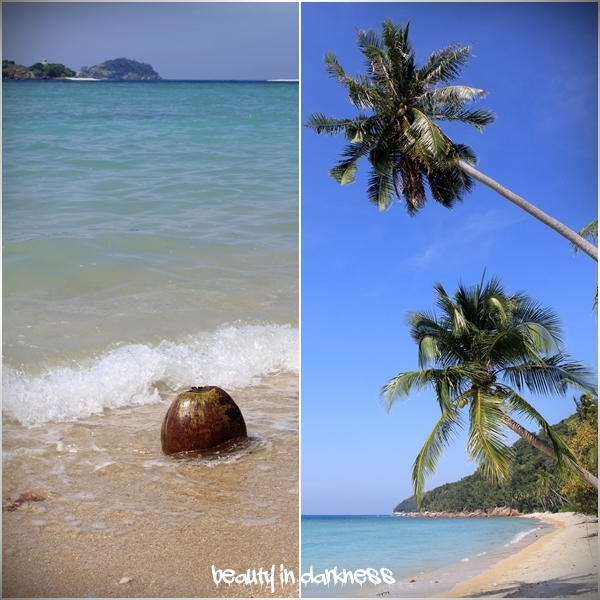 Since Redang Kalong offered a free-flow drinks, we lepak at the canteen while they prepared our rooms. 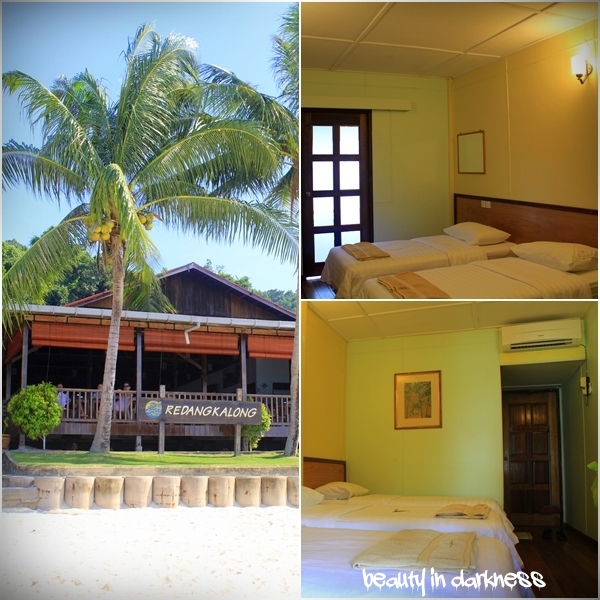 Once ready, we went into our rooms and changed to our theme attire for group photo session. We chose the sea-side and did funny pose, almost all the time, and I swear, we were blessed with each others! From virtual to reality, with hiccups here and there, we still unite as one AWESOME travelholics. 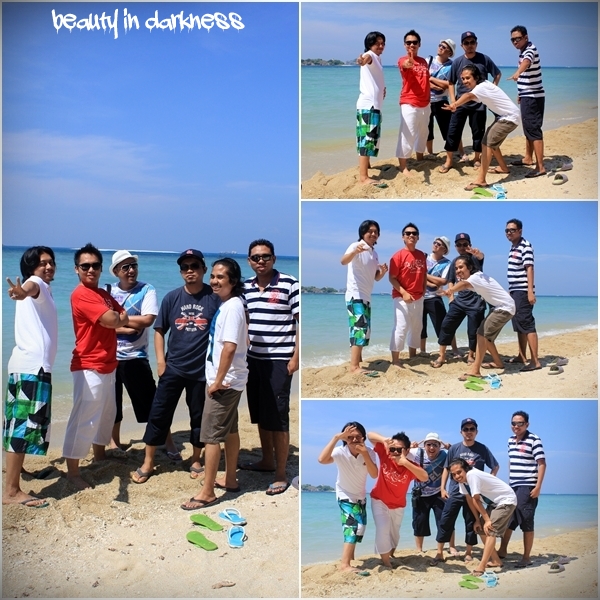 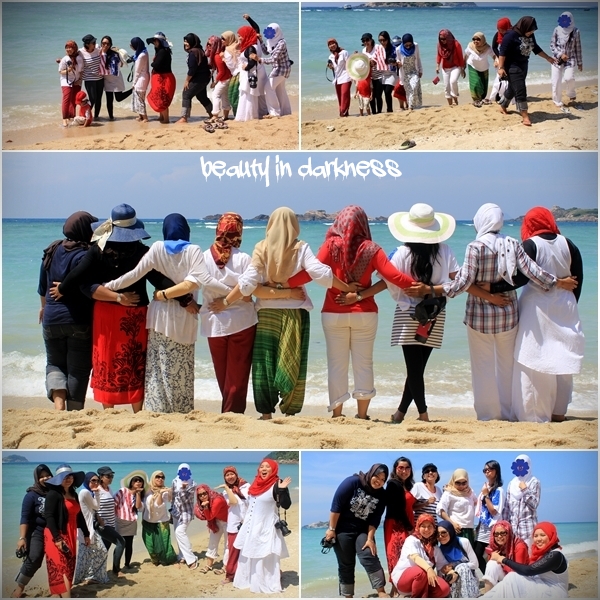 We laughed like hell during the photoshoot when some of us tried to steal the limelight, overshadowed, and what not (who else…?) The coolest guy, Dan, then set tripod and we had a full blast of group photo. 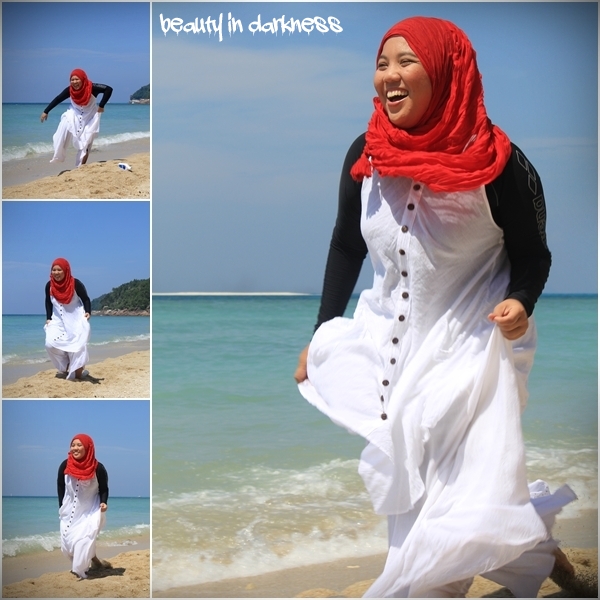 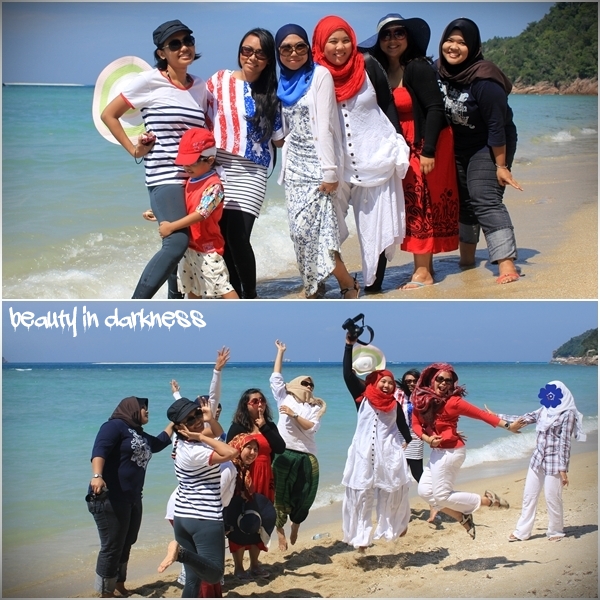 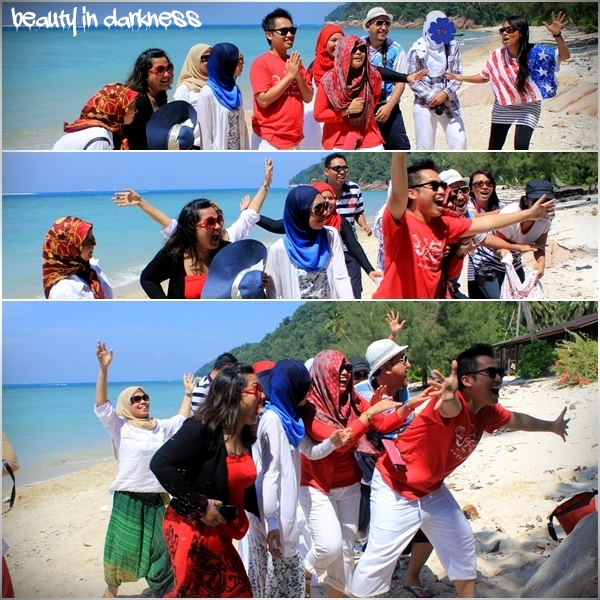 And I swear, the color that we chose were superb! (I was THE flag pole, Miss Amareka, Mr. Potato, and last but not least, Darth Vader?) 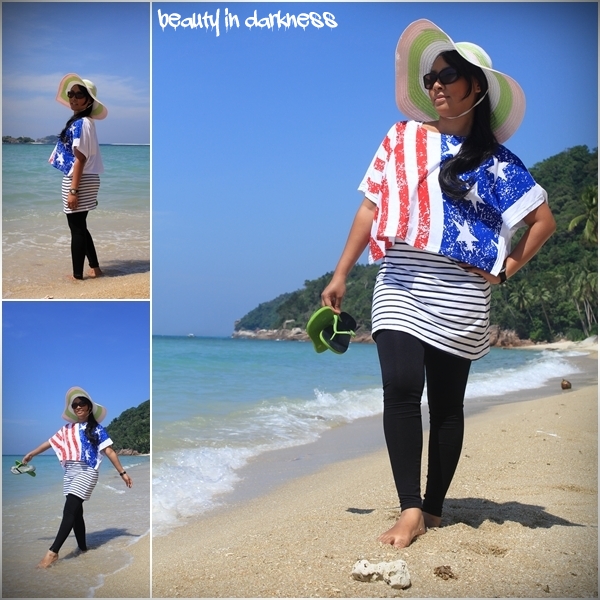 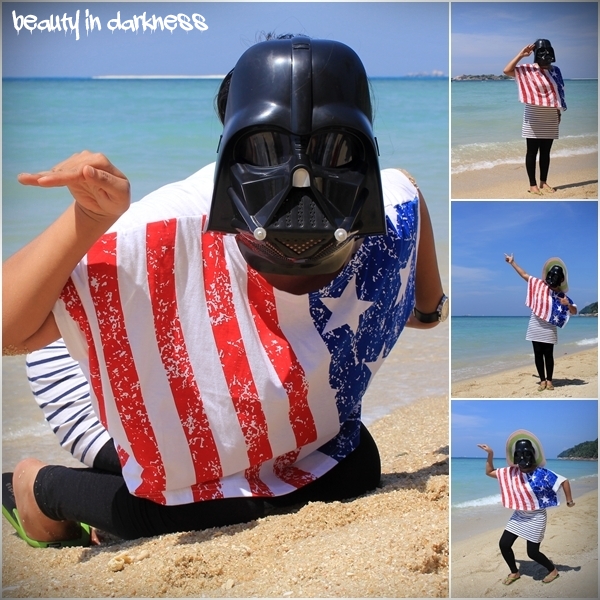 We then had buffet lunch at the longest table ever and I was pretty sure that, we were quite outstanding compared to other visitors. Even the beach boys like us! They were very sociable and friendly, especially Anuar, a big fat diver who loved to listen to gossip! Haha!

After performed “jamak” on the bed (I felt like gymnast who tried to balance on two feet while standing up…hahaha!), we went down in our swim attire. The good thing about Redang Kalong is, they will notify the guess by shouting “snorkelinggggg snorkelinggggg”. It was fun you know! And they knock the pole like “ting ting ting” for lunch. Macam asrama kan? Kihkih!

Almost everyone rented snorkeling set with life jacket, except for hubby and I (only life jacket), for we brought our own goggle. We applied sunblock while waiting for the rest, before we hopped in the transit boat. For about 100 meters, we were transferred to another big fisherman’s boat, headed to the designated snorkeling area called Pasir Akar, part of Pulau Pinang (not Penang ya.)

(I have limited underwater pictures since we have yet to share pictures. See snorkeling pictures at MasMZ and Anash.) 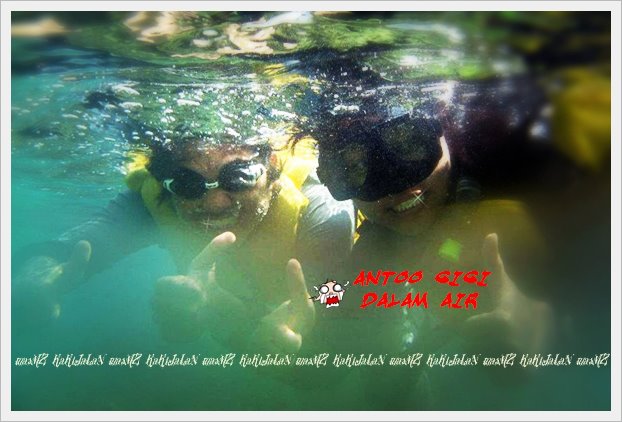 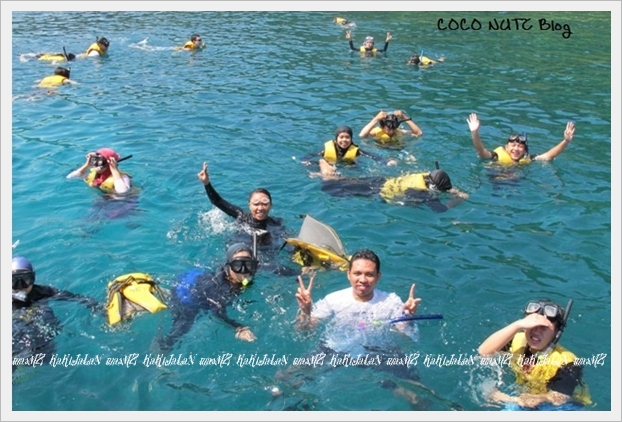 The water was crystal clear! We can clearly see sergeant fish, trigger, dory, parrot fish, right beneath us. So many of them! Anuar (our dedicated snorkeling guide) showed us some sea cucumber and starfish. After 2 hours of swimming, drinking salty sea water, laughing, we went back to Redang Kalong, for tea. But before that, we had to change to dry clothes coz they disallowed any water dripping on the floor. Cool!

Tea was fun, again, at the longest table that officially owned by us. We continued to explore the other side of the island, by walking by the beach, straight into the bush where we had to pass by one abandoned hotels. Scary! We finally reached Laguna Redang and enjoy the view. Guess what, sands were whiter, waves were higher, guests were sexier. Hahaha! 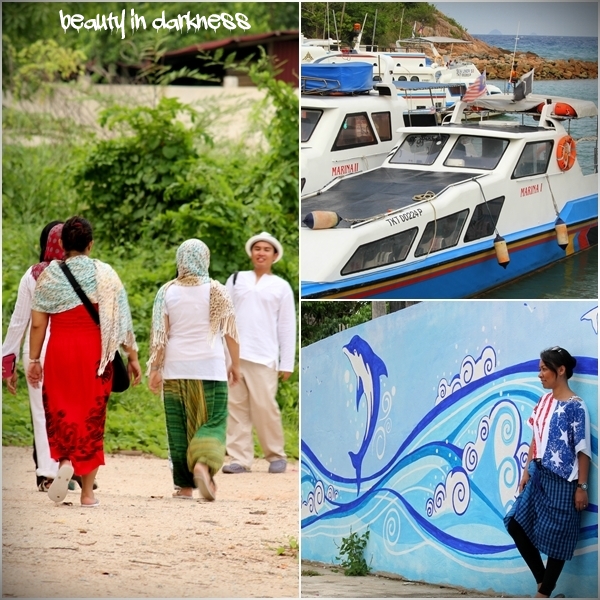 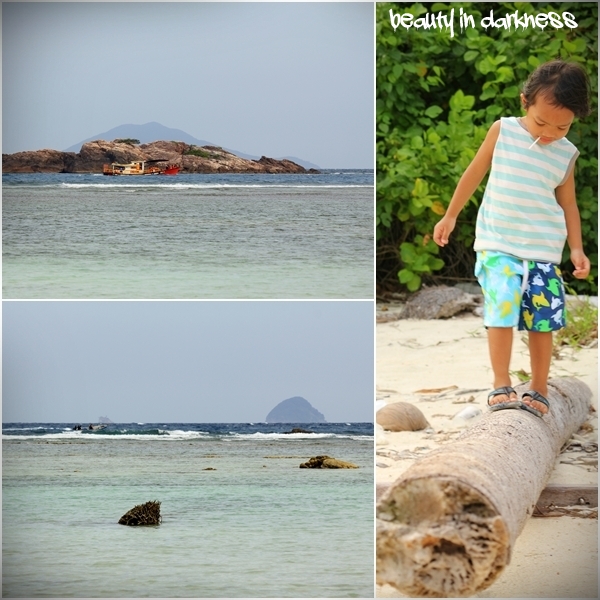 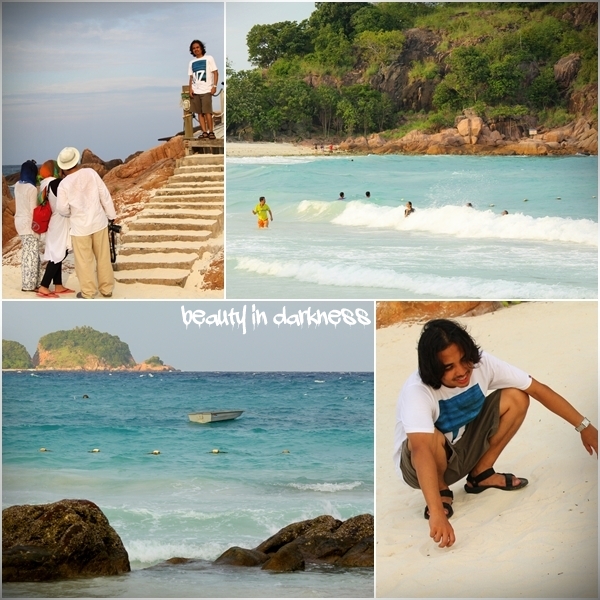 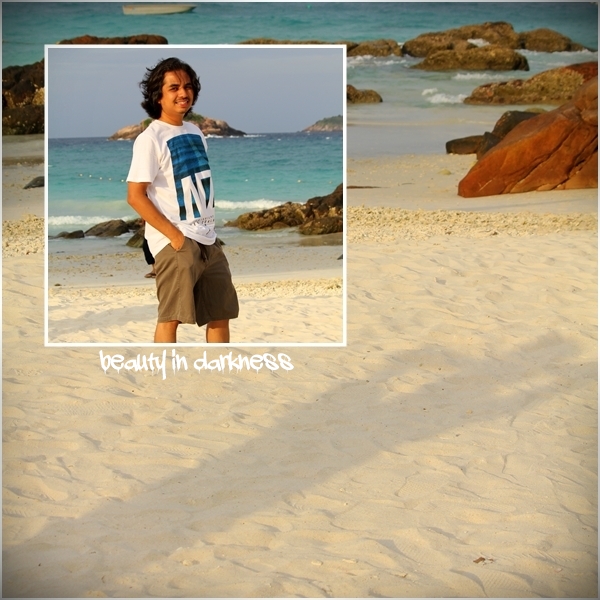 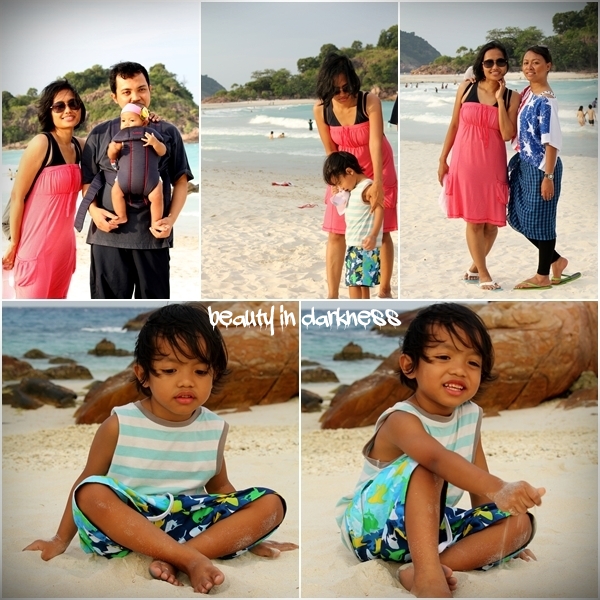 Half of us went back earlier since Ely was having Sami and Suci with us (it was nearly Maghrib). The other half followed 30 minutes later, where we met at the same long table for buffet dinner. The food was good and we ended the day with travel stories, funny stories, but to top it all, we had a super happening karaoke time! We conquered the room, though the song selections were super outdated! Like I said, the range stopped at 1980s! Hahaha! But we had to agree with the “mat saleh” that our voice was melodious. Well, he said so! Hubby and I did play pool for a set, before I sneaked in the karaoke room again. I can’t help it! 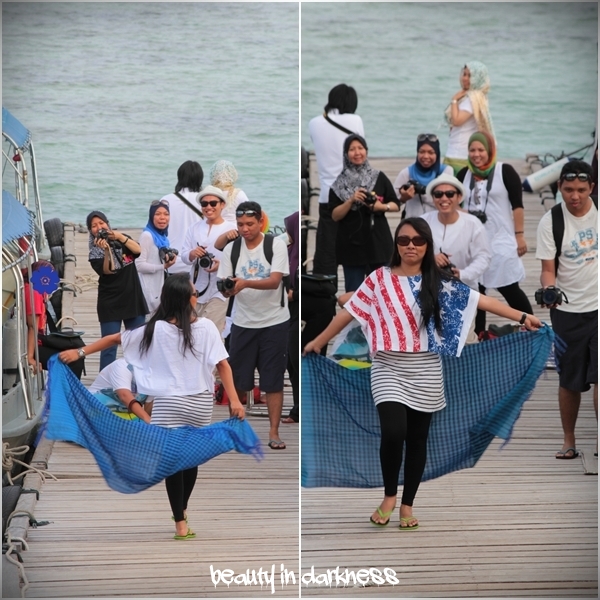 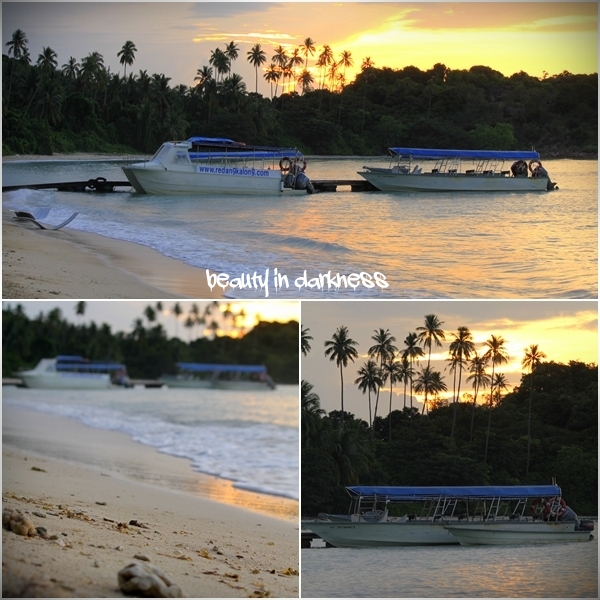 This is about travel n vacation, travel-malaysia-redang

hehhehe..
cannot stop smiling
by reading this blog
by watching Dan's video
hahahaa
we are awsome group indeed
.
.
seem we are closer than before..
Alhamdullilah

anash, indeed. glad that we made it!

lily, and all that pics are with u in it right? hahahaha! got lots of ur's and masmz's pics...

The photos are nice! The Ladies Group photo from back view is the best and unique to me!
I had never been to Redang yet and it is so near to home.

twilight, pls do that with ur friends :D eh go la, cantik u know!