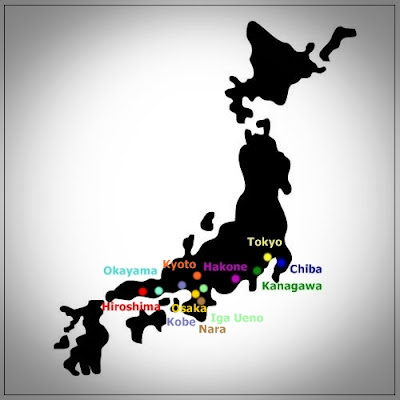 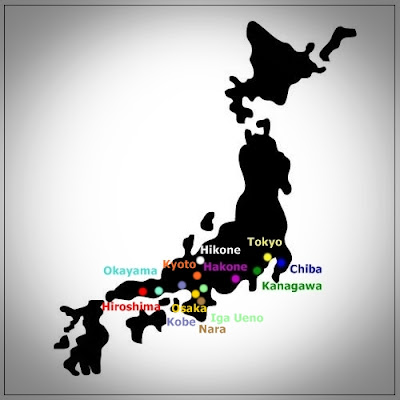 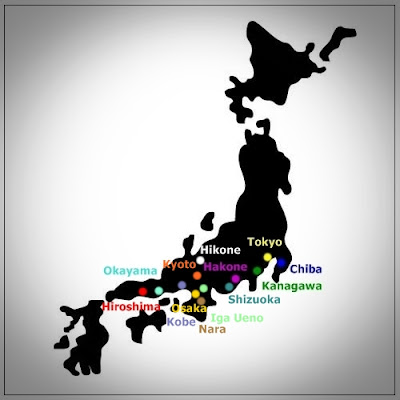 “Let’s mandi.” Hubby asked me to take whatever needed and went down for shower. Luckily, we were among the early birds, so we took our own sweet time to do our business.

We then packed our things and checked out. Since we will be going around the area, we left the bags at the reception.

While hubby went into the 100yen shop, I walked and waited somewhere near the main road, and take pictures. I saw old man by the road, rearranging bicycles that were parked along the pedestrian.

I looked around to check, was there another person that he was yelling at!

NO! IT WAS ME! HE WAS YELLING AT ME! AKU TAK PAHAM KENAPA?!

I FELT SOOOOOO HUMILIATED! AND I JUST STOOD THERE WHILE HE KEPT CONTINUING, YELLING AT ME IN JAPANESE!

I started to frown and think hard, what I’ve done. I was just snapping pictures of the main road, bus stop, and bicycles. I didn’t even snap his picture…or even his bicycle…! AND WHERE’S HUBBY AT THIS CRITICAL TIME?!

I walked to the left side of the road, where the old man can’t see me. I tried to stay calm though I felt like throwing my boot to his face. Hubby then came out from the store and asked me what had happened. I told him everything…but he replied nothing. Pfft!

At this point of time, I swear, I HATE OSAKA! Hubby tried to console me by saying “You just don’t like Osaka coz Na didn’t like it either.”

“Eh eh?” Hahaha! “I don’t like Osaka coz I saw dirtiness at the back lane, and that old man yelled at me la…”

“This is Tennoji, not Osaka town…”

“Ya, but they were smoking while walking!” Wah jeles kah?!

We walked away but I can still see the old man, talking to his friends (4 old men in total), and pointed at me. FINE! I THINK HE’S CRAZY! You know why? Coz he started to yell at another lady who walked by!

To soothe my heart, I told hubby that I needed a shopping therapy. So we walked towards one shopping area where it led to the Tsutenkaku, one of the landmarks in Osaka that advertise Hitachi. This tower was originally patterned like Eiffel Tower. 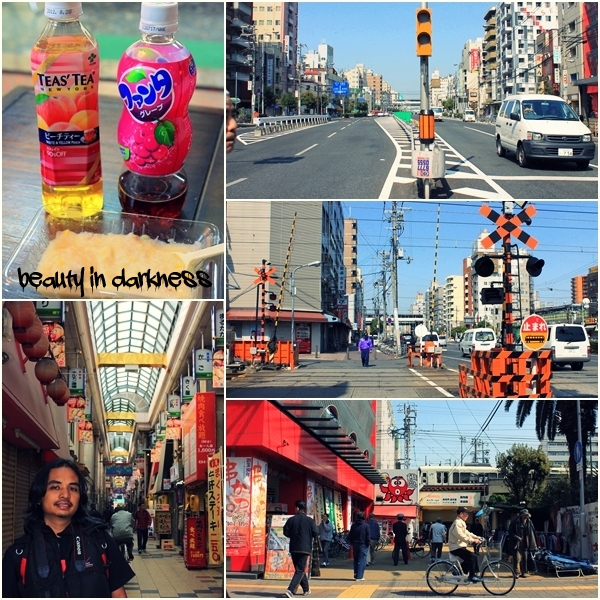 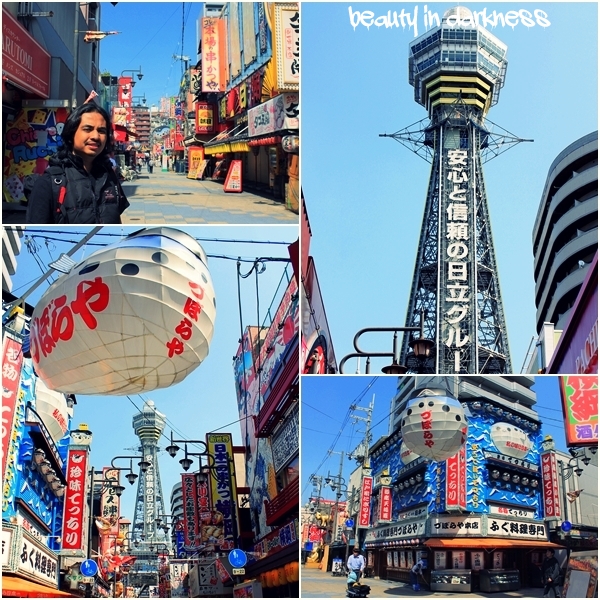 Adjacent to this tower, there were lots of Billiken statues along the road. It is an American charm doll known as god of happiness or things as they ought to be. At the same area, we can also see lots of padlocks, arranged in variety of shapes, stating love and wishes. 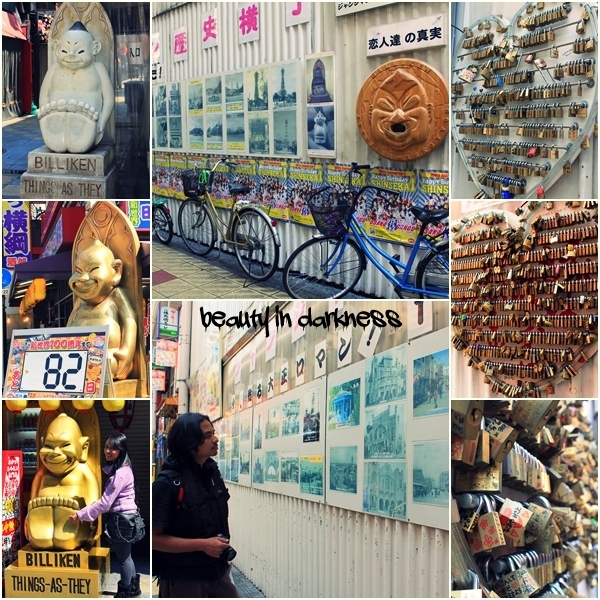 We then went back to the hotel and picked up our bags, and headed to JR Osaka Station. From there, we went to Shin-Osaka via Kyoto Local Line and stopped at Maibara via SKS Kodama 642, and changed to Hikone via JR Biwako Line. 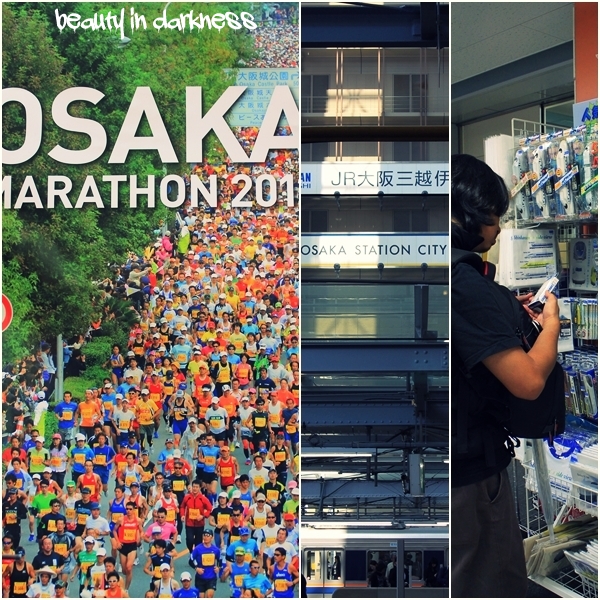 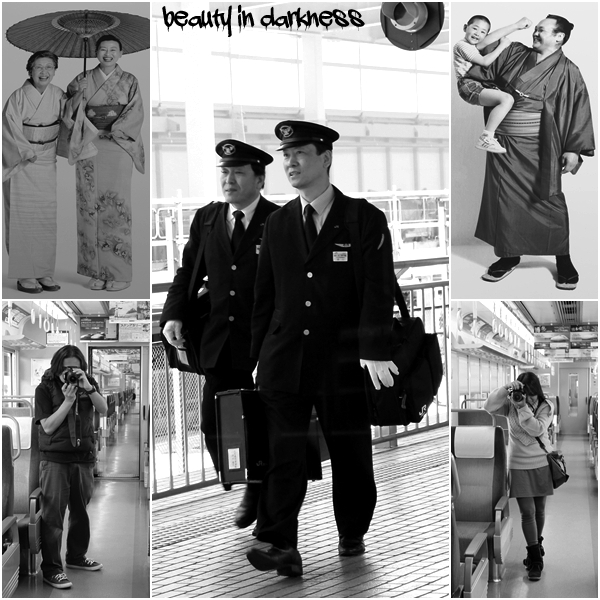 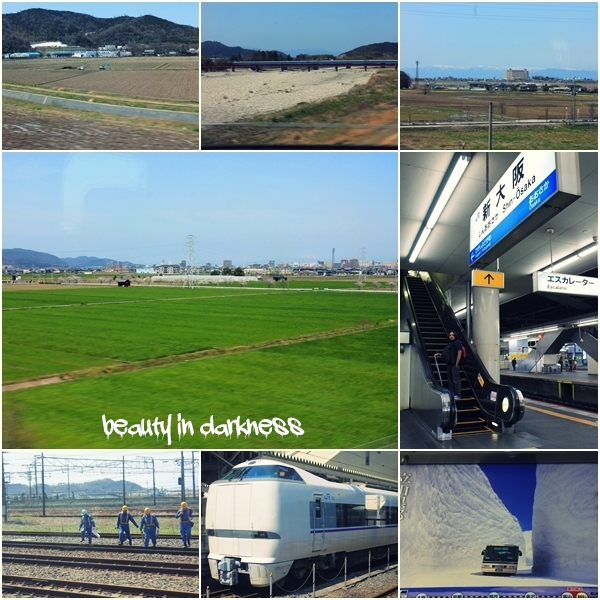 In the station, we grabbed some onigiri (we improvised it with "serunding" hahaha!) and pancake for breakfast, and walked to the end of the road, where we saw one big guide map of Hikone Castle. 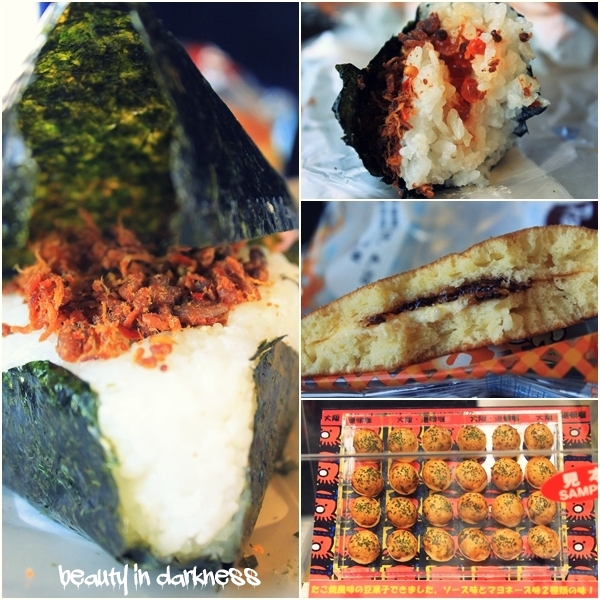 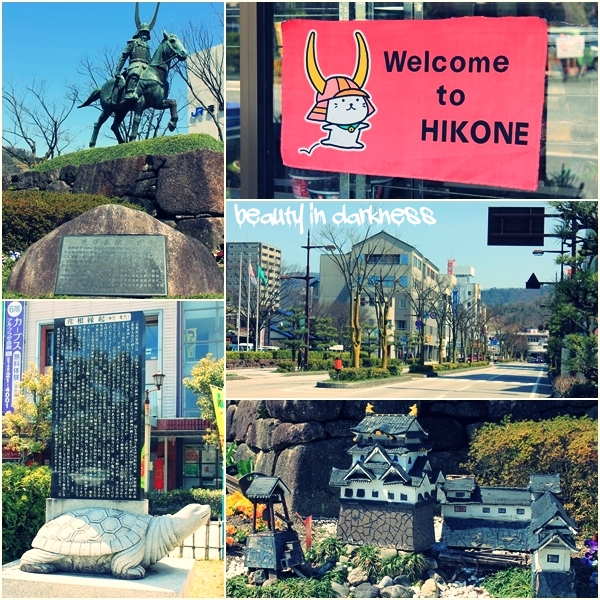 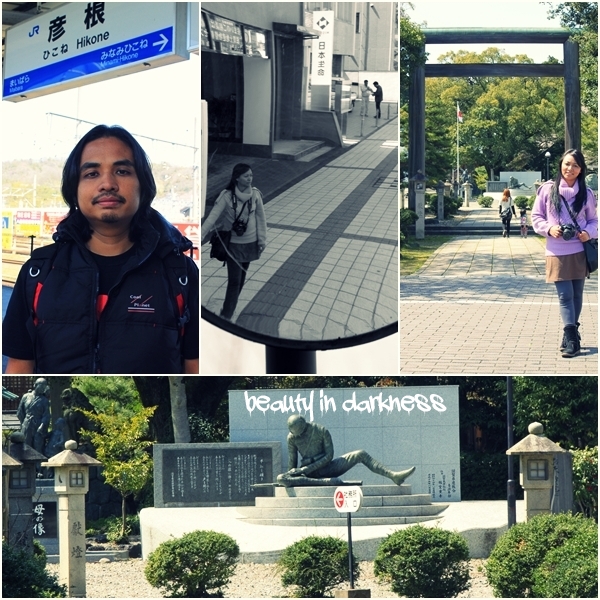 We chose to enter the castle compound to have a view of the castle but we still unable to see it clearly. We had to stop several times for photo capturing since the yard was too beautiful to let go. The boat that was cruising via the canal with sakura blooming and red lantern had completed the scene. 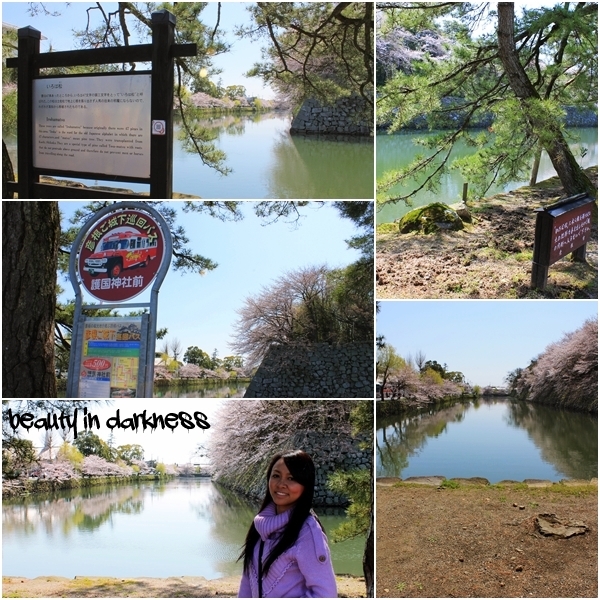 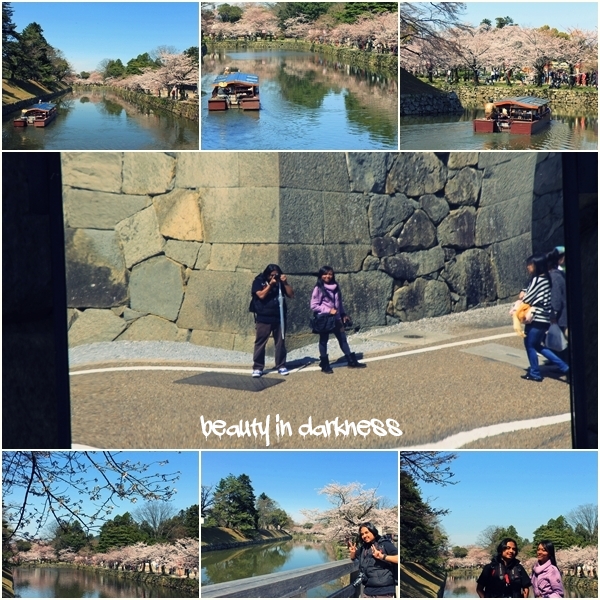 Once in a while, we saw brides and grooms passed by, in their amazing and wonderful wedding costume, smiling and giggling while taking their outdoor photo session. Dengki sangat! 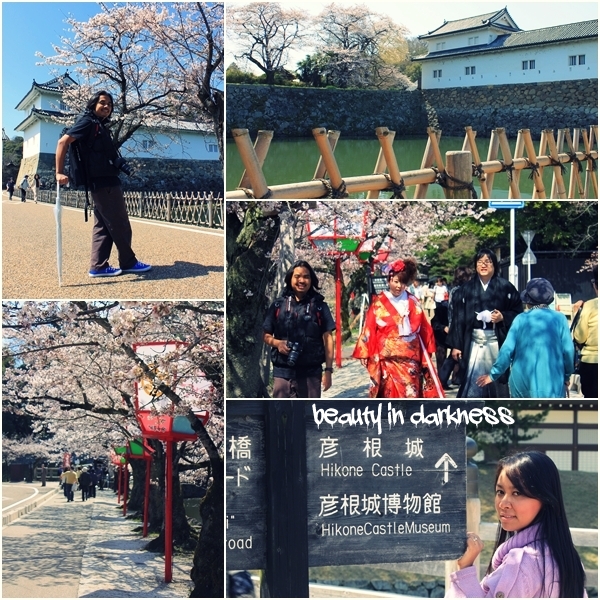 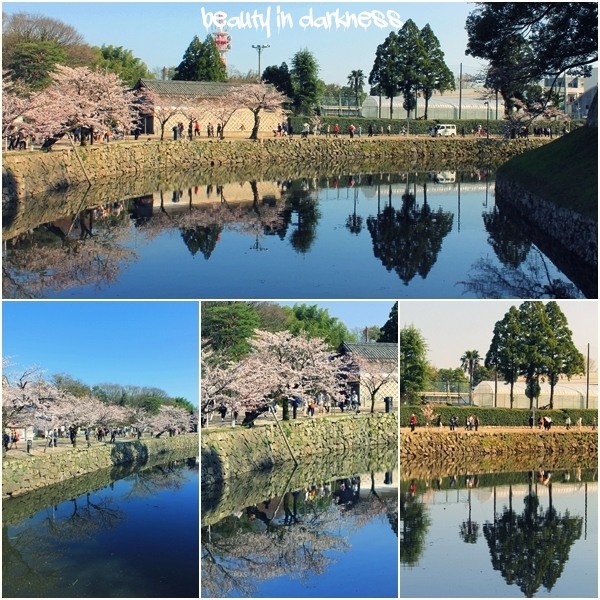 We then walked towards the main entrance, where we bought two tickets with the price of 600yen each.Guess what? The pathway was overwhelmed with pool of school kids in blue coats! We had to wait until they gone, before we got ourselves climbed the stone stairs. Who knows that, there was another pool of school kindergarten kids in blue and pink caps! Nasib baik comel, terpaksa amik gambar! 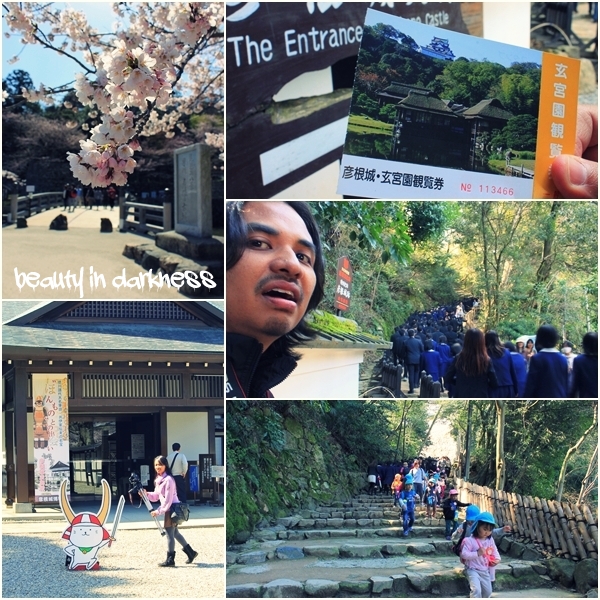 We crossed the bridge and explore the yard, before we went into Hikone Castle, one of the four castles in Japan designated as national treasures. This castle survived without undergoing destruction and reconstruction, where the main keep, inner moats, walls, guard houses, and gates, remain intact. 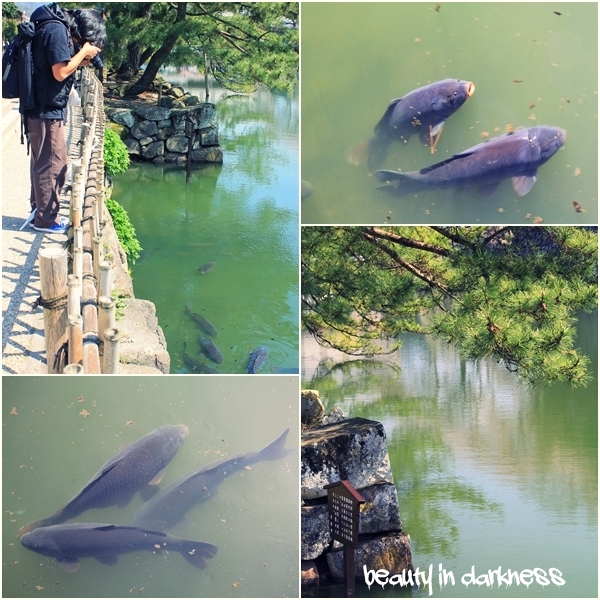 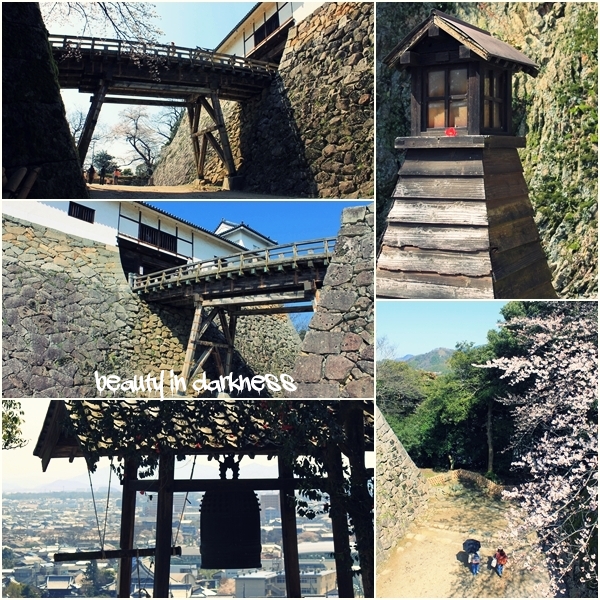 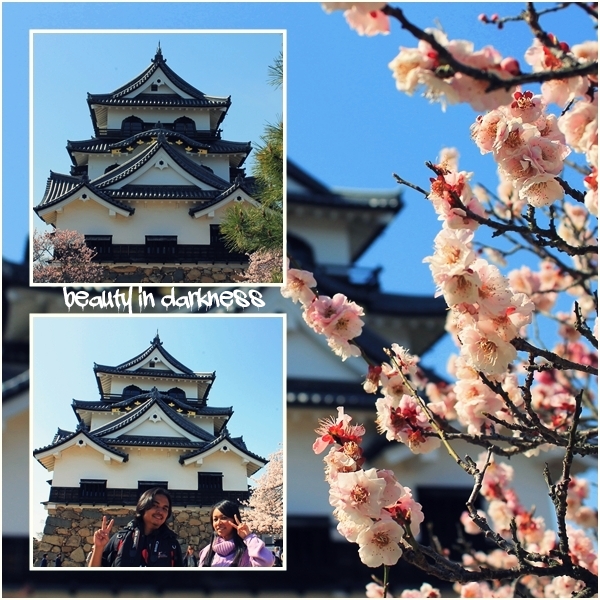 Looking at the pool of humans at the main door made us think 10 times, whether we should climb up or not.

“But we can see Lake Biwa and the castle ground…and the city…” Hubby tried to persuade me.

“Hmm…ok…what else we can do, right?” I agreed. Beforehand, we snapped more pictures in front of the castle, with sakura as the highlight.

We were needed to take off our shoes once we got in to experience the tatami walkways.

“And that is the steepest stair I’ve ever seen!” I pointed to a slanting wooden stair that you almost kiss while climbing. Even worst, you did it in one hell of longggggggggg queue, right behind a group of old folks! Pfft! 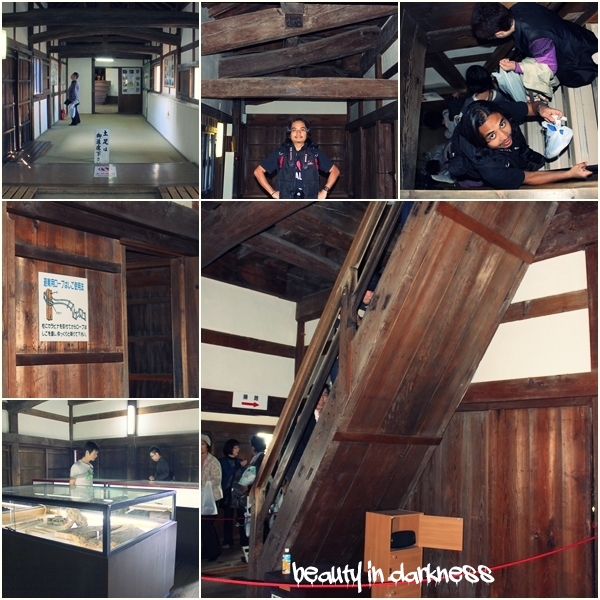 “There’s Lake Biwa!” Hubby pointed to one large lake, from one of the main keep window. 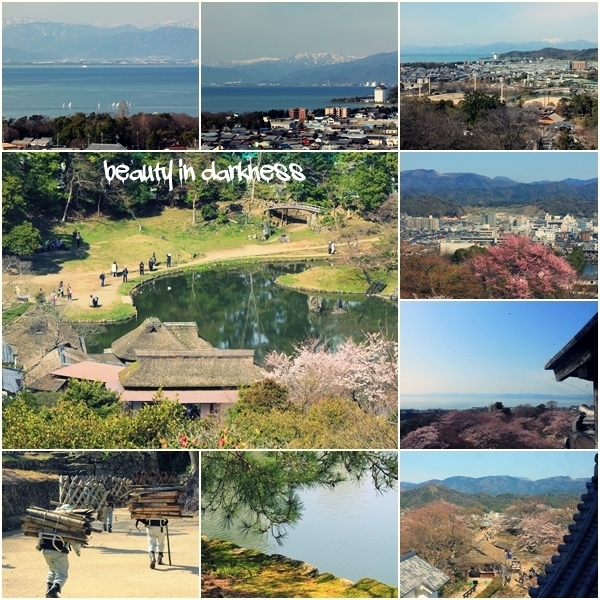 After half an hour, we went down and took more photos over the canal and yard, before walked back to JR Hikone Station. 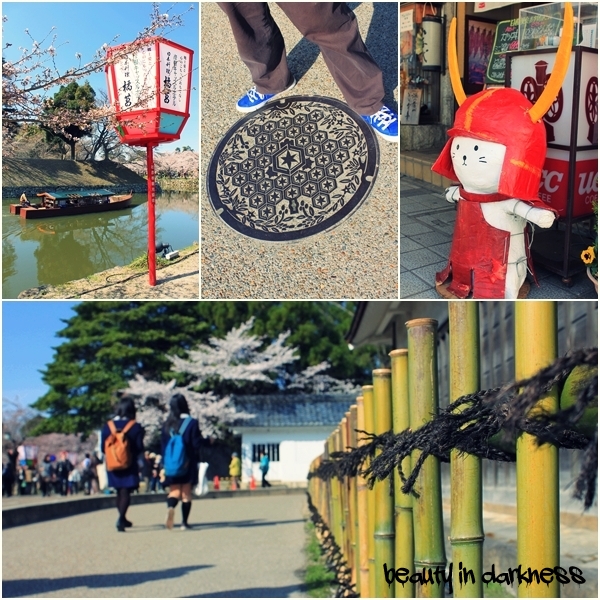 “Ok…we had to skip Nagoya, but we need to stop for a while at Shizuuoka.” Hubby changed the plan.

From JR Hikone Station, we took a direct shinkansen to Shizuoka and stopped at Shin-fuji via JR Tokaido Line. The original plan was to go to Miho No Matsubara via bus, where we can see Fuji at the end of the beach, but we had no extra time left, since we will be catching the flight in Tokyo.

In dim, we can still see Mount Fuji from the Shinkansen, so we decided to walk out from the station to have a clearer view of it.

The moment I saw Fuji-san right in front of my two eyes, I almost cried. It was BEAUTIFUL and HUGE! I finally stood right before the snow capped mountain that I always see on my mom’s Hazeline Snow bottle!

To bad I had no luck to capture it well on camera coz it was already dark and we had no time to set the tripod. 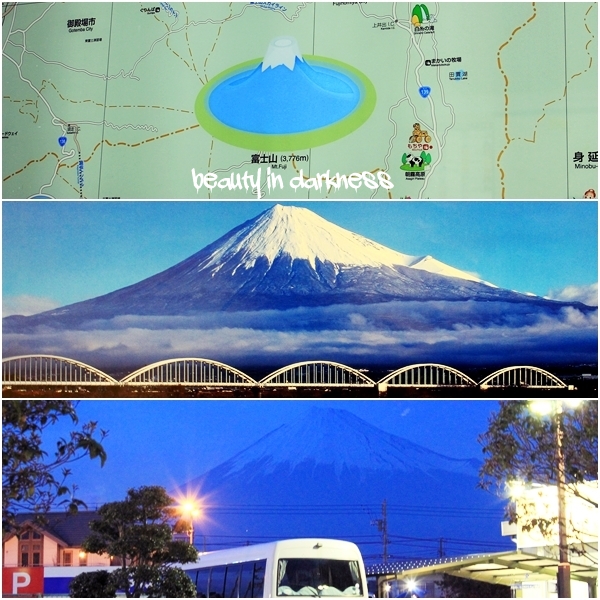 And so we off to Haneda Airport, leaving Japan with good memories. My dream came true. I've seen and experience the technology, the culture, the people, the environment, the panorama, everything...and I swear to come here again, once my saving hit the ceiling...(skarang baru kat skirting lantai...sob sob!) 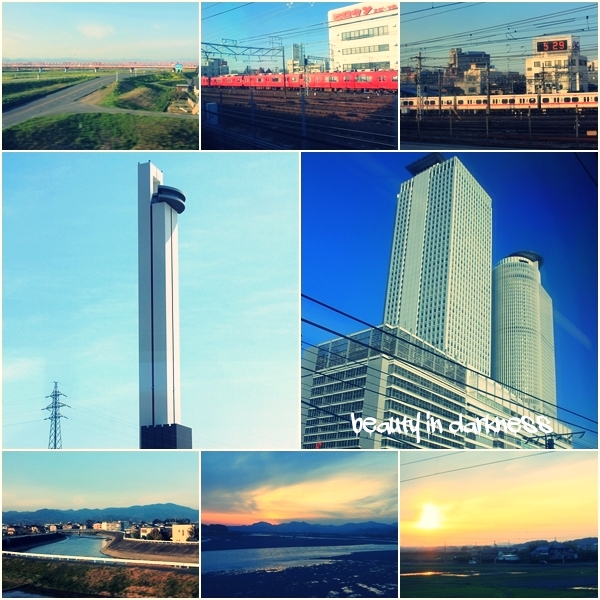 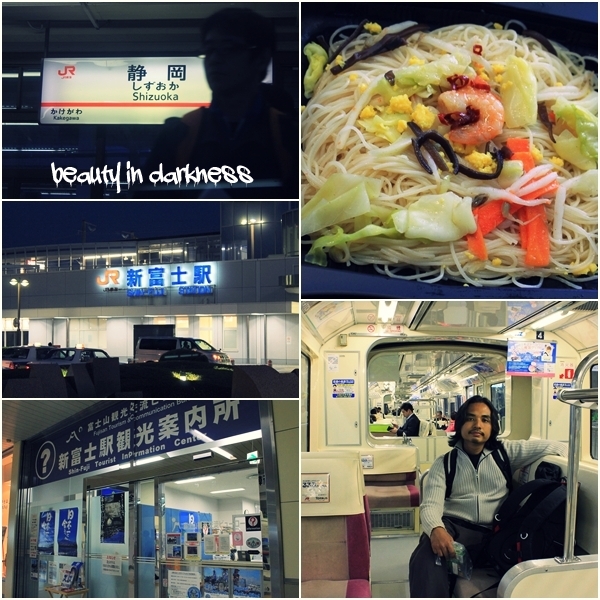 And...with this post, I have FINALLY ended my Japan Travelogue!

Unbuttoned by Biqque at 6:35 PM

wow such a nice shot

orga, mmg senang sgt2! u just need to know where and how. berdesup peginyer :D

Thank you for all your lovely photos! I love the creative angles both of you snapped. Very good!

I did not visit that castle. I will do so on my next visit and if I see that old man, I will smack his head real hard for yelling at you. I could understand 2 words - BAKA! BAGERO
What an idiot he was!

The steepest steps remind me of the steps at the temple ruins in Angkor Wat.

wow..that's a veryyy loonggg trip posting..and thanx for sharing and your hard work on putting up the photos together to share with us..

twilight, pls smack that uncle for me. i think he had a hard life during japan occupation in malaya hahaha!

ya, remembered that too! super steep huh!

hcvvorld, no prob. glad that u guys "feel" me :) hope that others can enjoy my japan travelogue and do better than me :)