An hour later, we reached the Killing Field, a.k.a Choeoung Ek Genocidal Center. We paid USD2 each in order to enter this heartbreaking memorial. The atmosphere suddenly became quiet. Everyone was walking on the available trail, looking at the info board, one after another...(ya, I know, I-should-have-not-smile...but I was too excited to be there...) 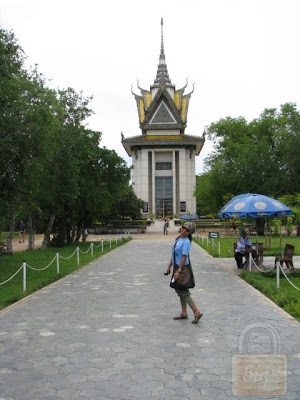 Similar to the Nazi death camp, Auschwitz, this Killing Field also had several checkpoints for truck stop, detention cell, execution station, chemical room, ceremonial kiosk, and killing tool storage room. Anyhow, what left were only the base foundations, since these buildings were dismantled back in 1970s. 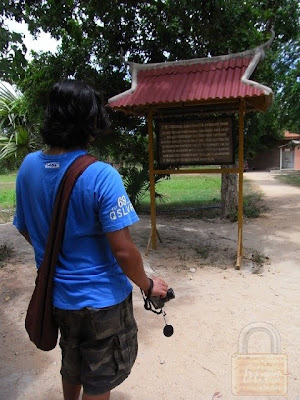 I still survived at this point, but my heart started to palpitate when I arrived at one site, that revealed white human skulls, bones and teeth. The condition became even worst when I saw one covered hut that buried victims that mostly naked children and women. My heart was poignant. I totally don’t understand why kids and women need to be victimized by Pol Pot regime, when women were also among his officers! And there was one particular killing tree, where officer grasped both babies feet, SMACKED them against the tree, over and over, till breathe their last breath! HOW CRUEL! FUCK YOU POL POT! 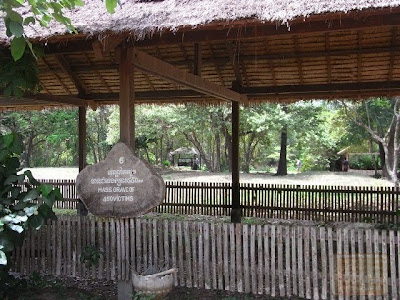 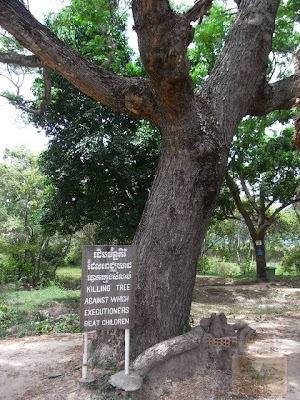 With heartbroken, I walked towards several uneven lands, in the shape of curvatures, like dented lands. There was one spot that I believed a Chinese grave.

But I still wondered…why too many submerged soil around that area. 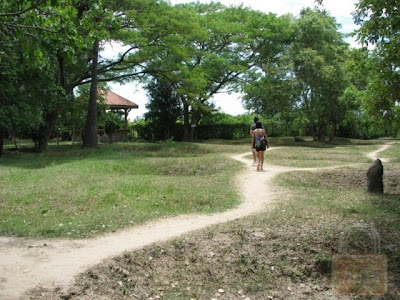 We walked further and stopped at one see-through tank, full of victims’ clothes and belongings. There were bones in another tank too. Opposite these tanks, there was a big tree that used to hang a very loud speaker, in avoiding the moan of victims while they were being executed. LAKHANAT BETUL! 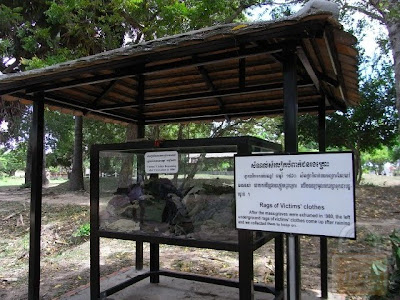 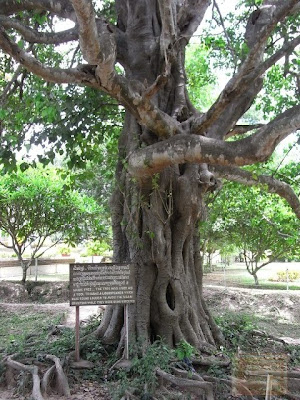 We continued walking and those submerged curvature lands still everywhere, kept bothering me.

“Please don’t walk through the mass grave!” I read. 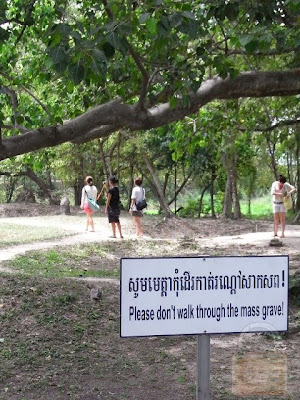 O.M.G…those uneven lands were actually pools of buried victims? Yup, there were 300+ mass graves with almost 1.4millions victims! Again, this excluded death due to disease and starvation. Sigh. See what human can do to human… 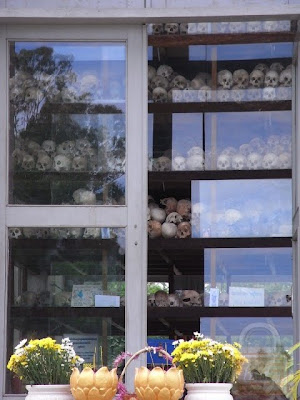 Our touchable journey ended at the one and only stupa that full with victims’ skulls and bones. Few tourists paid their respect by offering flowers and burned “colok”. We didn’t dare to snap more than two pictures of the stupa, afraid of feeling haunted, thus, we walked towards the museum, not far from it. 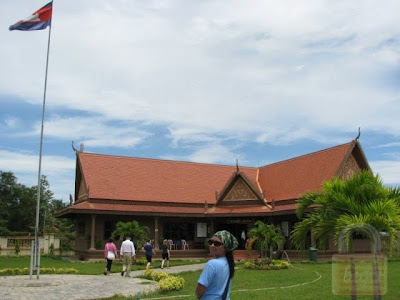 In the museum, camera wasn’t allowed. Basically, the info boards were telling us who were involved in Khmer Rouge regime, how and where they did it, how it started and ended, until their final trial, as well as Pol Pot's death. Too much sadism, we had enough. We walked back to our tuk-tuk, to the next stop.

“Hehe…sorry, I need to pick up my son from school…he wait there long…I will ask my friend to bring you afterwards…” Daroos, the tuk-tuk driver told us.

We later moved on to the next stop, Toul Sleng Genocide Museum, popular with the name of S-21. In front of the museum,

Daroos, the tuk-tuk driver later introduced his friend and he asked us to memorize his friend's face and look for him after we finished visiting the museum.

We walked into S-21 and each of us paid USD2 for the fee. Used to be a secondary school with 5 blocks, it was converted to Security Prison 21 to imprison whoever against the regime. Those were from highest ranking like academicians, politicians, intellectuals, soldiers, to the lowest ranking like normal workers, and farmers. The blocks were divided into small crude cells that equipped with long and connected steel cuffs to shackle the prisoners in a line. 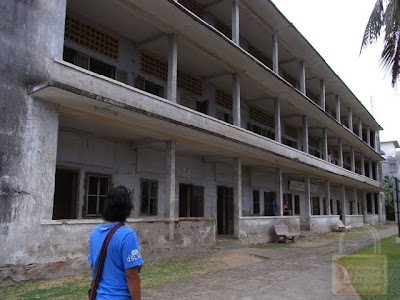 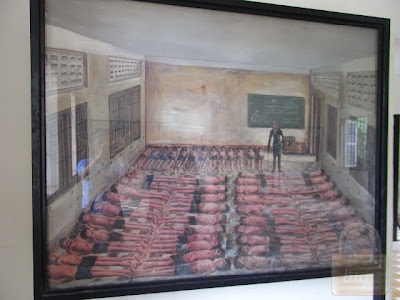 Looking at rows of black and white mug shot of the victims (women, men, children), gave a spookiness atmosphere. There were victims’ graves in the courtyard too. All blocks were surmounted by barb wires, with ground floor used for interrogating and individual jailing purpose, while first floor was for mass detention. 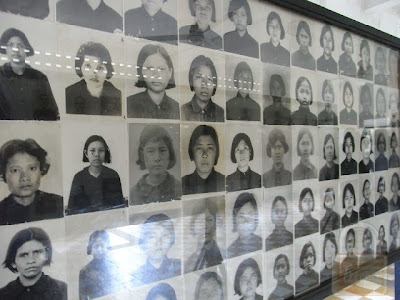 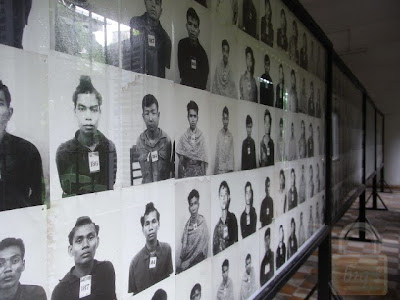 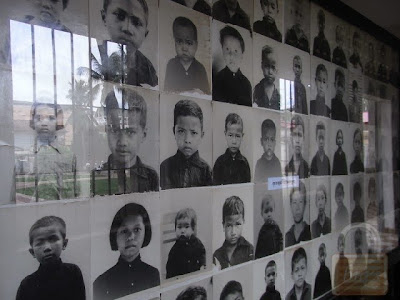 We stopped at one big board stating the rules of the prison. Among the regulations, the most absurd was “while getting lashes or electrification, you must not cry at all”. STUPID! BANGANG KE HAPE? Kena sebat ko expect nak gelak macam dalam cite James Bond ke?! 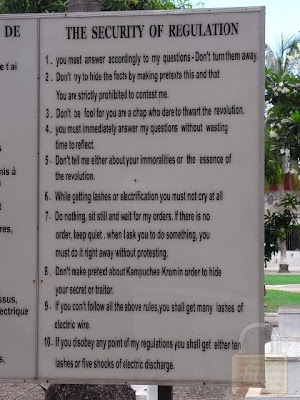 We hopped from block A to block B and saw similar condition. Almost all cells have blood marks on the chequered floor. There were steel bed frame, with a picture hung on the wall that showed how the prisoner looked like back then. Outside the block, a place where students used to conduct their exercise, became the place where Khmer Rouge hung the prisoners upside down, with both hands tied at the back. They were then dipped into a smelly and filthy water that was used as fertilizer for the crops! HOI! GILE KE HAPE?! OK, AKU NAK MUNTAH… 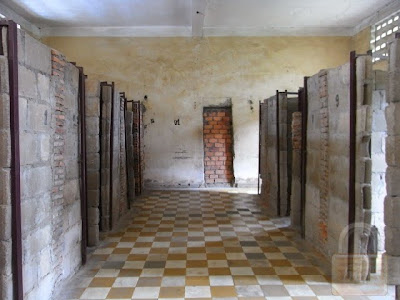 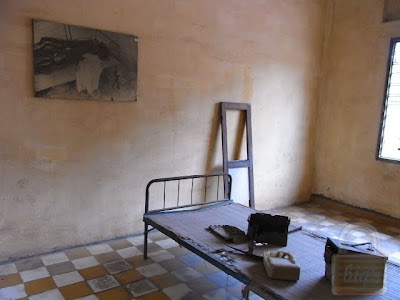 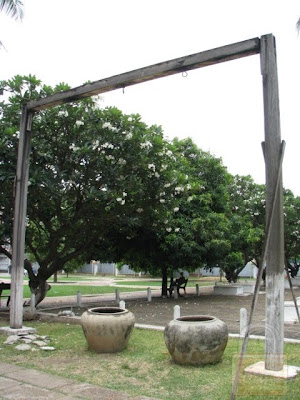 Before we vomited to each other’s face, we moved on to the next block C that full with pictures and artifacts. One of the pictures showed how they punished a woman prisoner. The officers pressed her nipples with adjustable wrench/clamp, and put centipede on top of her body! OK! ENOUGH! PATHETIC! NO MORE BRUTALITY! LET'S GET OUT FROM HERE! 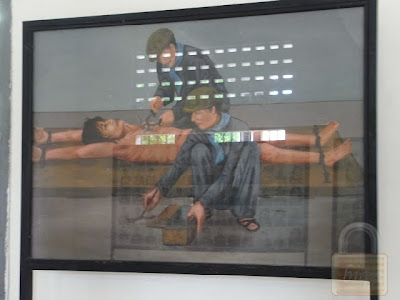 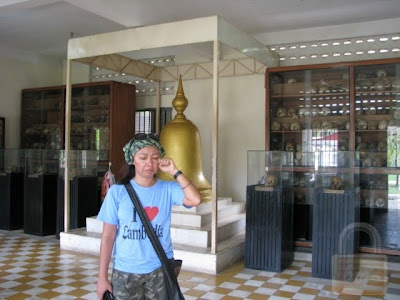 We later changed from violence…to…horror...(ah, fainted!). The next room was full with what they call “ghost of Toul Sleng”. I tried to ignore the truth coz I was pretty sure that it was a “two separate pictures on top of each other” (teknik bertindih la konon). But when I gazed at one mug shot of a lady with her baby on her lap, I TOTALLY FREAKED OUT AND WENT OUT! 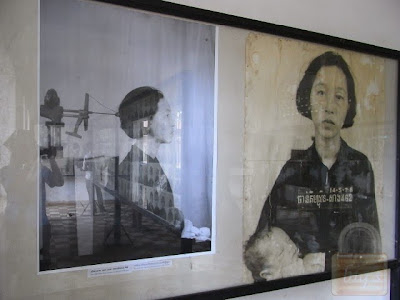 We hopped on and guess what, this new tuk-tuk driver, kept on singing all the way long to the Russian Market. Hahaha! He looked so happy, I presumed because he simply got half of Daroos’s money. He drove us to this popular Rusian Market, a.k.a Toul Tom Pong, which we found as the largest collection of souvenirs. Wide variety of options from antiques to junks, this market specialized in fine silks. I grabbed this opportunity to buy fridge magnets, coasters, and caps. (Yeah, not silk.) 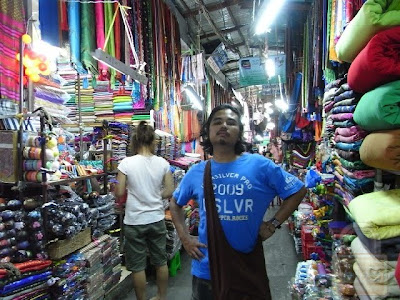 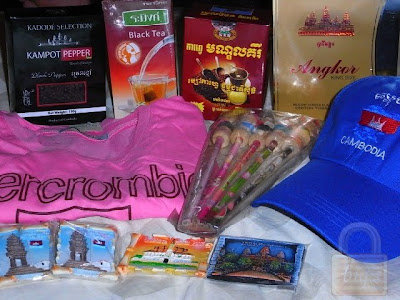 We then asked the happy singing tuk-tuk driver to stop at KFC, to get us a dinner for that night. Akin to five star services, two girls greeted and welcomed us, and opened the door. We saw no one in this huge empty restaurant, assuming that Cambodians cannot afford one, and tourists undervalued this restaurant. We both then ordered for snack plate.

Back in the hotel, we got ourselves cleaned and had our dinner. I started to complain when AC water still dripping on the floor and TV. There was only one bottle of water on the table that supposed to be TWO. The toilet’s flush still not working properly. Ini tak bleh jadi! Hubby then walked down to the reception and asked the staff to attend to the problem. We’ve waited for 30 minutes, but none of the staff came to fix it!

We just ignored the problems and went out to Sorya Mall. We thought of going to the Central Market, a.k.a Phsar Thmei, but it was already closed. We continued walking in the mall and bought ourselves a couple of cheap ice-cream. I got myself an Abercrombie baby-T, to be worn tomorrow. 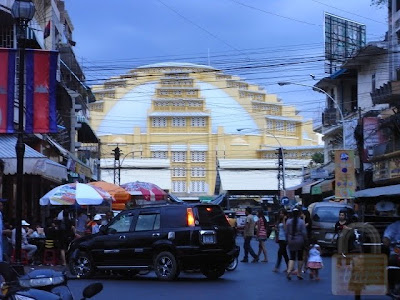 When we got back, we saw TWO bottles of water placed on the table and the toilet was working properly, ok, good. BUT the AC water was still dripping, slowly onto the TV.

“Owhhhh…this hotel will definitely be ranked as POOR in TripAdvisor!” I promised! (And I did.)

The next day, we got Daroos to drive us to the Phnom Penh International Airport for only USD5 (yes, that was freaking cheap). 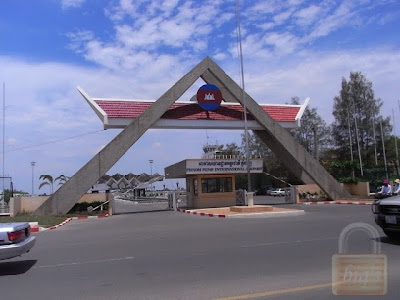 So long Phnom Penh. I shall return… 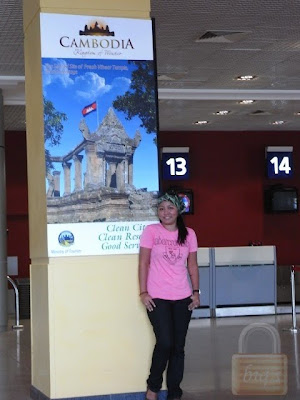 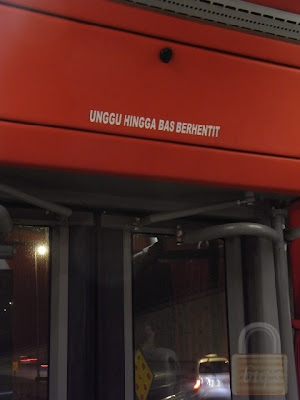 I am now, officially close the Cambodia trip logs, with this stupid joke...BerhenTIT?!

Unbuttoned by Biqque at 9:52 AM

omg...this place sure haunt them forever!!!

Interesting, sure hope I can go there soon..Your blog is now one of my new favorites :)

tx ron :) keep reading ya...will be going to beijing next :)

yup, u should go there, one of interesting places on earth :)