Riding the bus from Carrington Hotel to Echo Point was really enjoyable, for we can observed the beauty of houses and locals living over the mountain. I bet they don’t even know what “stress” life would be. Haha! My heart started to pound even harder when I saw high cliffs and wide valleys. At that point of time, I knew that we have reached Echo Point, the most visited lookout at Blue Mountains. 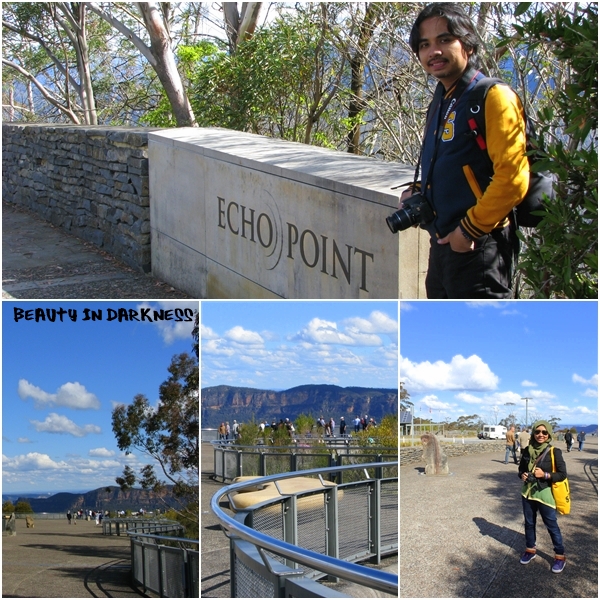 We jumped off the bus and switched on our “gears”. While hubby busy snapping photos, I filled my time over video shooting. From this point, we can clearly see the southern Blue Mountains, the greatest rocks formation of Three Sisters, and Kanangra-Boyd Wilderness.

A huge and wide deck stood before me with interpretive plaques, explaining the area of Jamieson Valley. I need to allocate some time just to capture the whole plaques, for too many people were standing before me. 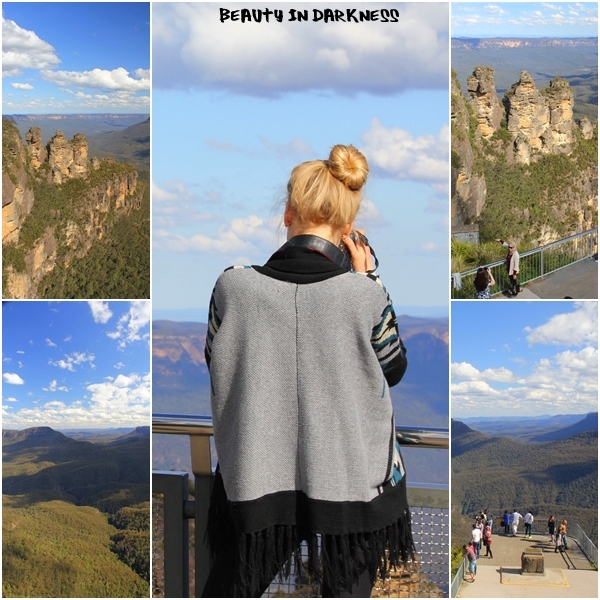 It was really a breathtaking moment. The scenery was superb! The plateau, the blue particles, wow! The name said it all. The blue tinge is believed to be caused by mie scattering that came from scattered ultraviolet radiation. Thus, the blue haze named the mountain.

From a distance, on my right, I can see a cable car hanging high from Scenic World down to Jamieson Valley. When I finished reading the self-explanatory plaques, hubby was already on the upper deck! He shouted for my name and we snapped each other’s photo. 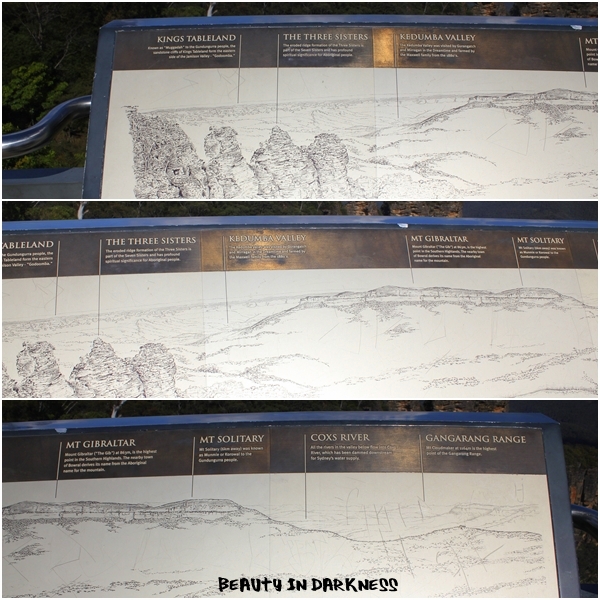 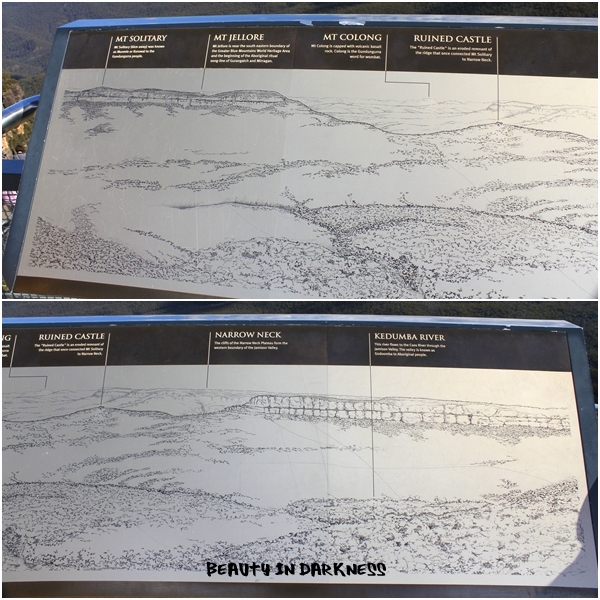 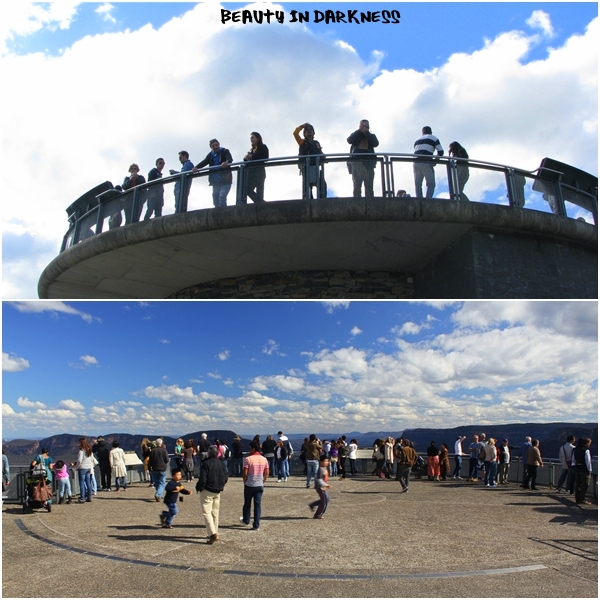 We then get closer to the railing to have a better view of Three Sisters.

“Halo, can take picture?” One Chinese guy approached me for help. I snapped the couple pictures and guess what we got in refund?

Yes, a picture of us. That’s the good thing of helping people when you travel. 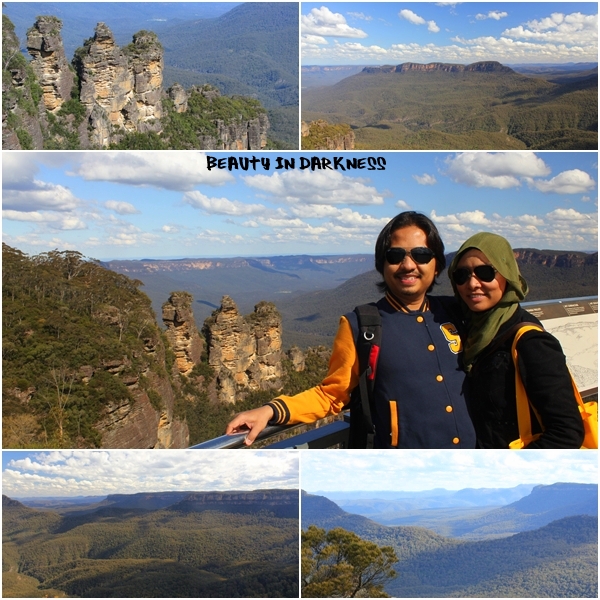 Here are two summaries that I read on the myth of Three Sisters.

Three Sisters' myth and legend #1 - Bunyip the Evil Creature
One creature called Bunyip love to feast on human flesh, especially young girls. Father of three sisters had to pass by Bunyip’s hideout, so he left his three daughters on top of the cliff above the rocky wall. They stood silent but a centipede was spotted, and one of the daughters screamed. Her scream went loud till the evil creature was awakened! The father then rushed to get his daughters and with powerful magic, he pointed a magic bone and turned his daughters into stone! Then he ran away and turned himself into a bird! REGRETLY, he lost the magic bone when he turned into a bird! Kan dah susah nak cari balik mana kayu magic tuuuu! And the three sisters still stood there watching their father, hoping that they will turn back to themselves. Haih, kesian sungguh.

Three Sisters' myth and legend #2 - Forbidden Love
Three sisters from Gundungurra tribe fell in love with three brothers from Dharruk tribe. They wanted to get married but it was totally forbidden. That means tribal war. The three brothers then decided to kidnap the three sisters. Knowing the intention, one clever man turned the three sisters into stone and promised to turn them back once war had ended. UNFORTUNATELY, the clever man was killed during the battle! Ha kesian tak? Since that man had the most powerful spell, till then, no one can ever break it. So bomoh sekalian, kalau rasa hebat, silalah test power. 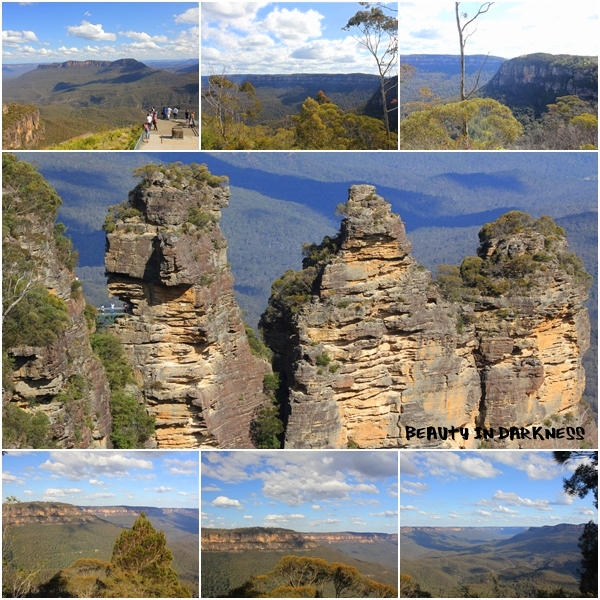 So moral of the story, JANGAN MEMANDAI NAK SUMPAH-SUMPAH. Shh!

Note : To see Three Sisters statues, you can go to Scenic World. Take shuttle bus from Echo Point or The Carrington Hotel.

Note : Giant Stairway entrance is just next to the souvenir shop. It is a small and clear track. Worth to visit.

This Giant Stairway led to the Three Sisters that we saw earlier on. I couldn’t remember how many steps that we had walked on but it was pretty deep down the valley where we bumped into few bushwalkers on the way down.

“Ayang, you go lah…” I forced hubby to continue the journey, while I snapped his picture from above. 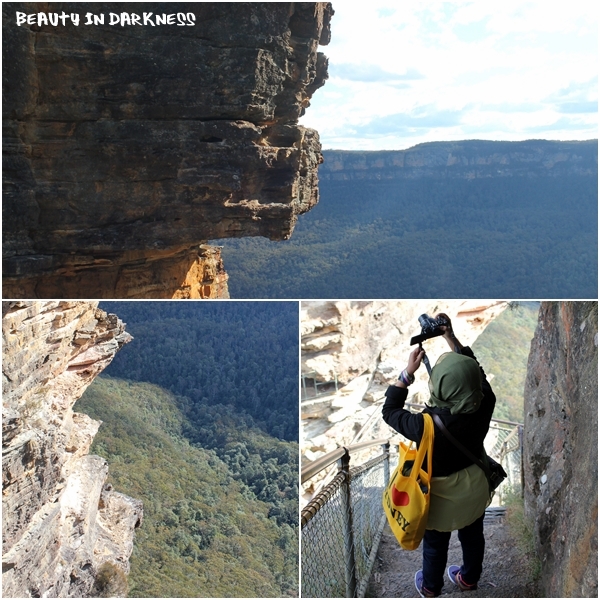 Hubby finally reached the “back” of the Three Sisters. Thanks to the Australia Tourism who provides the facility to reach this amazing stones. But still, at your own risk lah. Hehe. 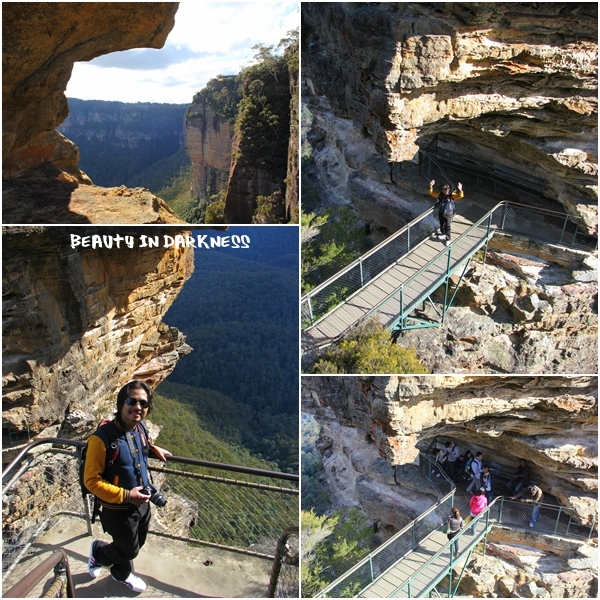 Note : Take extra care while walking down the steps. It is steep and slippery.

Hubby then walked inside the stones where few tourists started to walk up, back to the Echo Point. So he had plenty of rooms for himself, where he danced, moved here and there, while I captured him on video.

Satisfied with our catch, hubby and I then walked up but this time, it (the fatigue) was double up! I had to drag the souvenirs bag and crying for H20! 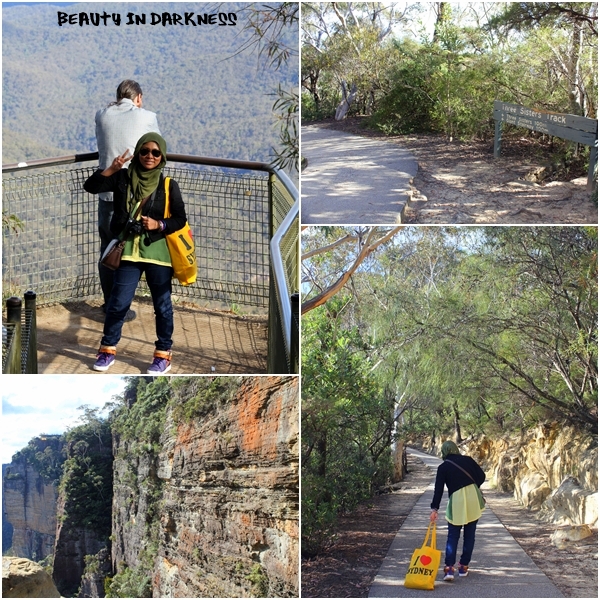 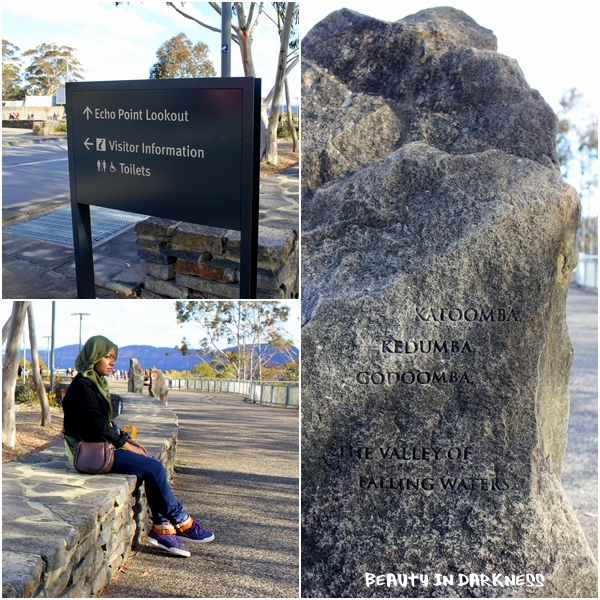 We stopped at the souvenir shop for a while before we walked back to the shuttle stop, and waited for the next bus. Few minutes later, we reached the Carrington Hotel, the earlier point where we hitched the bus. 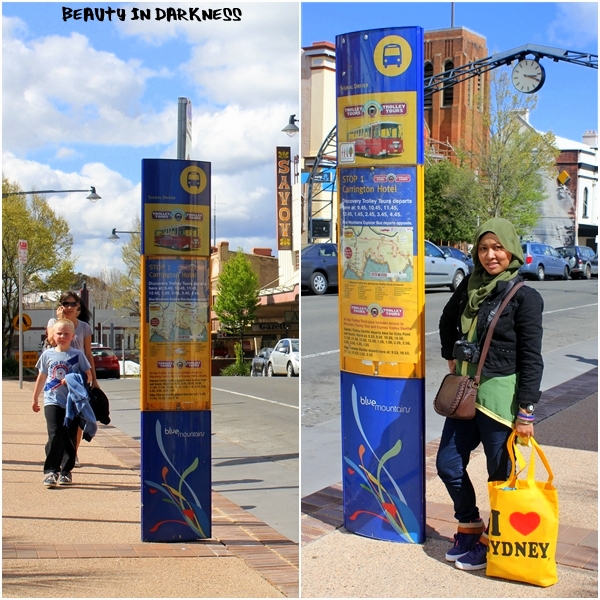 On the way back to the Katoomba Station, we stopped at one Visitor Center, to get a fridge magnet. We then entered the station and waited for the train. While waiting, hubby and I spent some time to do video clips with those beautiful facilities at the station. And I was really satisfied with the result! 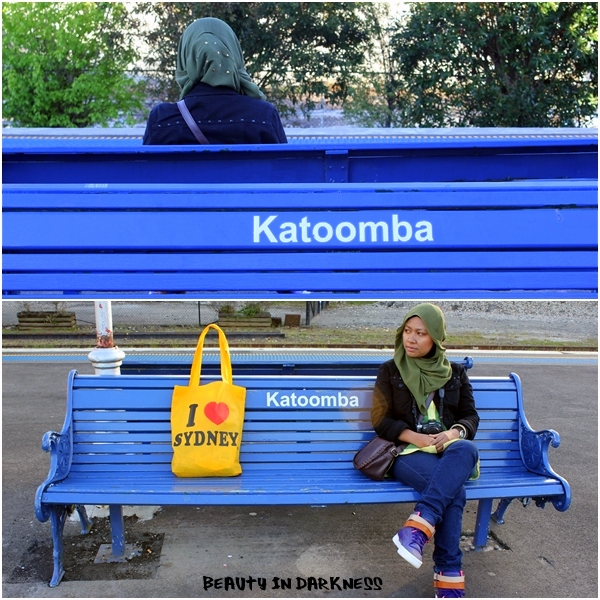 Note : There are few souvenir shops along the way to Katoomba Station. Stop by to get one for yourself. 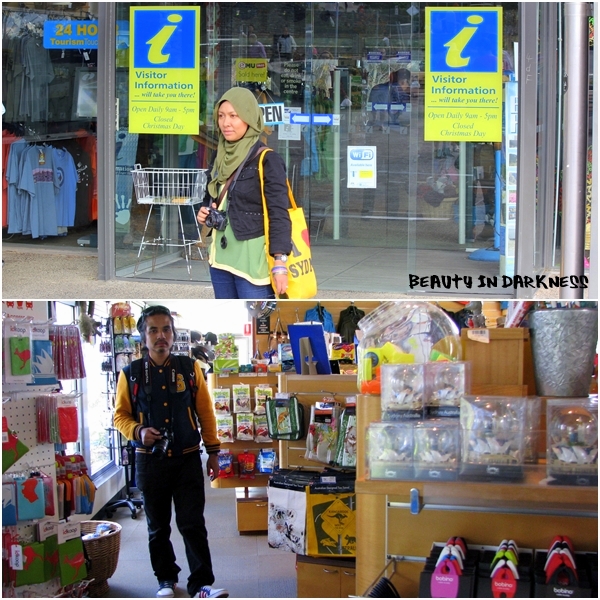 We ended the day with satisfaction and happiness, where we FINALLY got to visit Blue Mountains. With out of sudden snow in Katoomba, extra splurge on basement hotel in Sydney, strong wind and heavy rain in Kiama, we managed to counter it all. And therefore, we slept in smile.

Note : Spend a night in Blue Mountains to experience different views from different lookouts. It is really worth to visit! 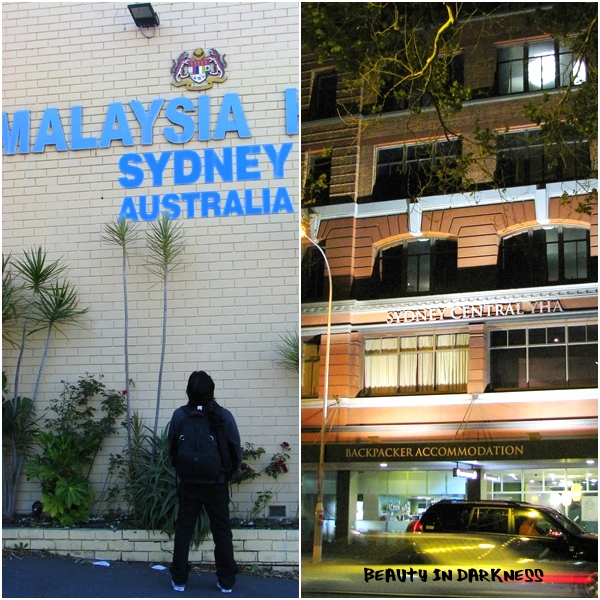 The next day, we checked out from Malaysian Hall and took a bus to airport. Earlier that night, we saw another accommodation that might suit you guys out there, a YHA. At the airport, our flight was a bit delayed due to unclear signal from the tower. Lots of flights were inline, taking turn to take off. So I took the opportunity to snap different aircraft. We finally had our turn and left Sydney, with thousands of memorable experience. 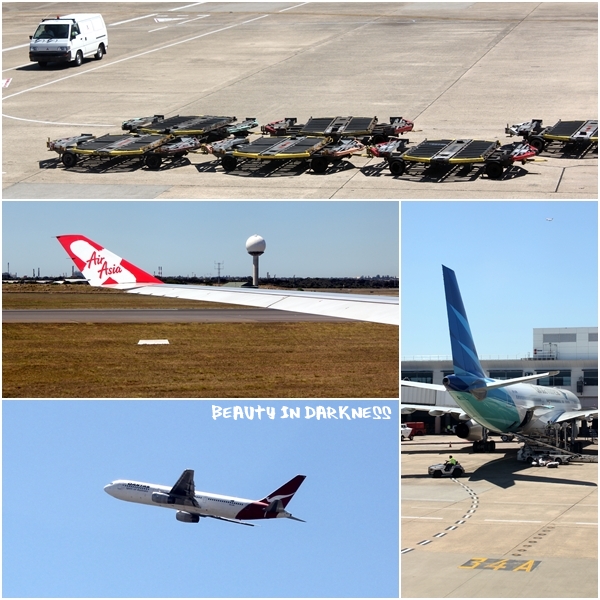 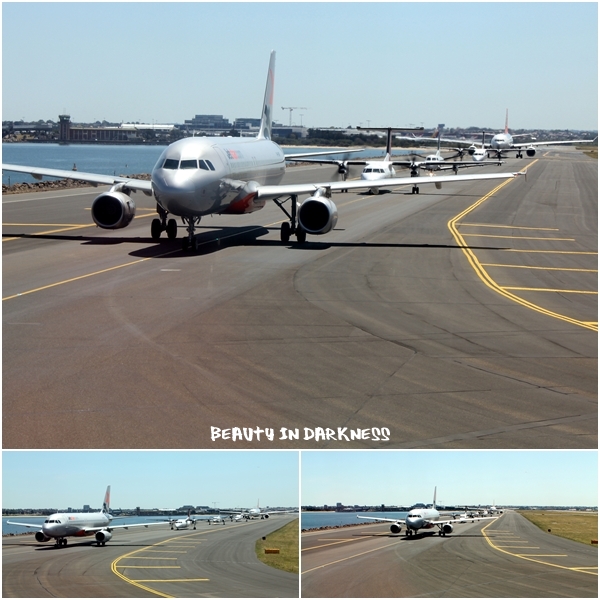 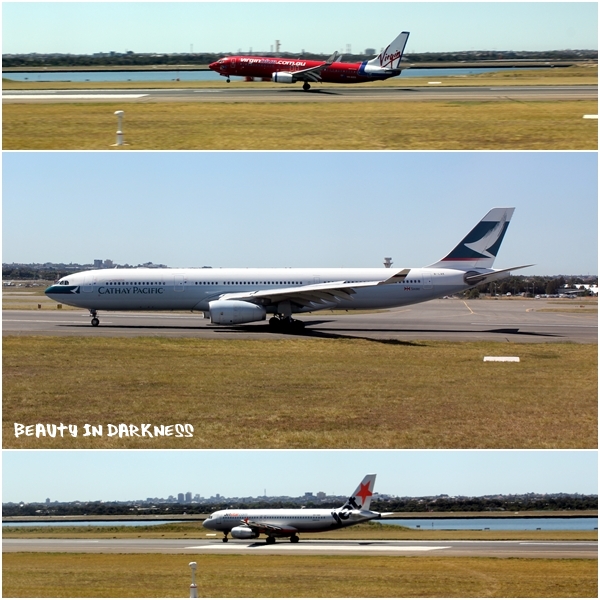 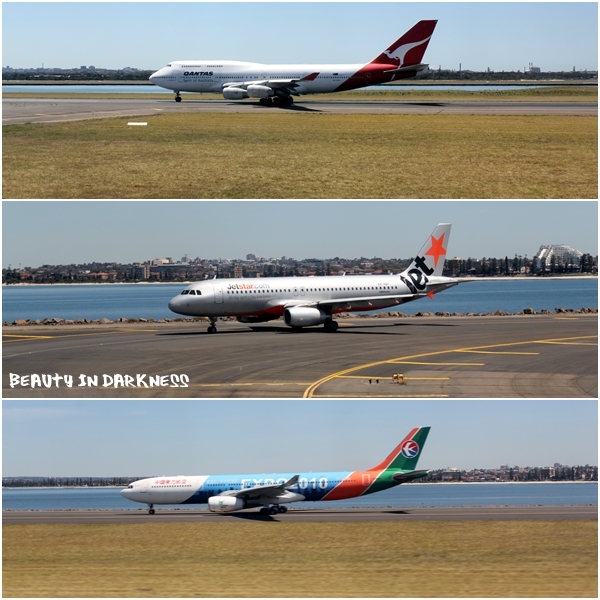 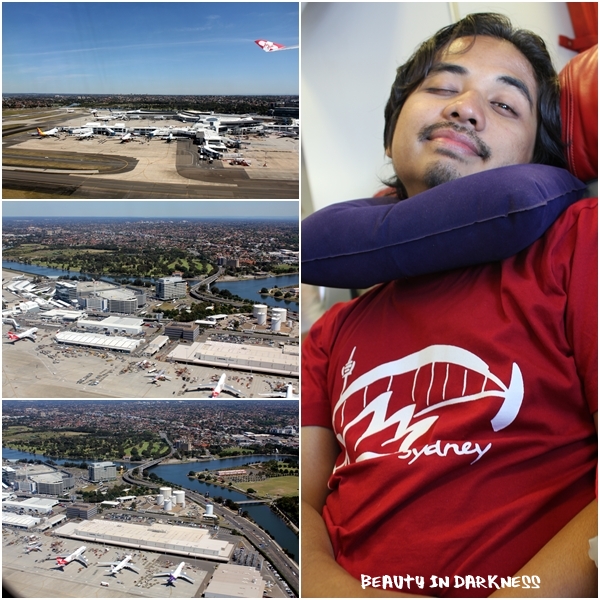 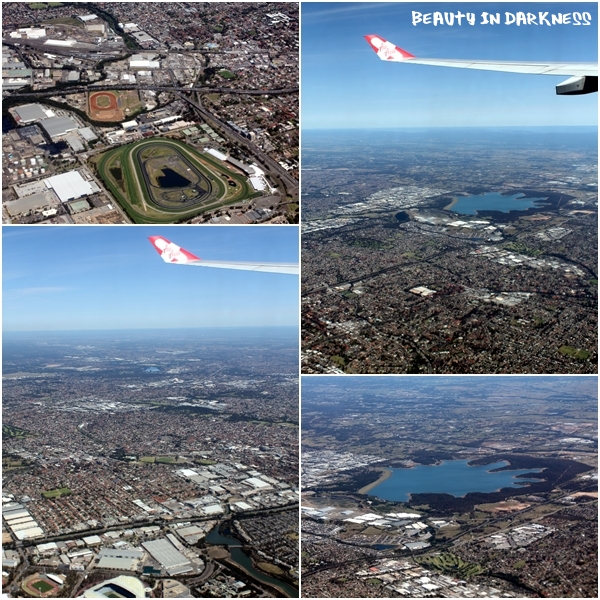 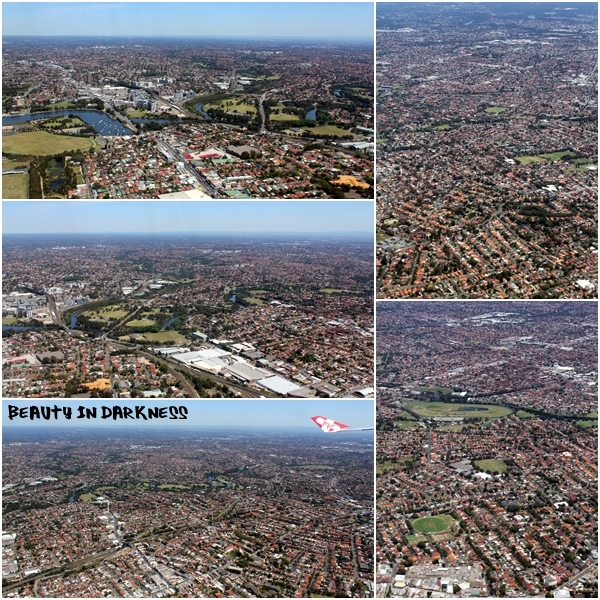 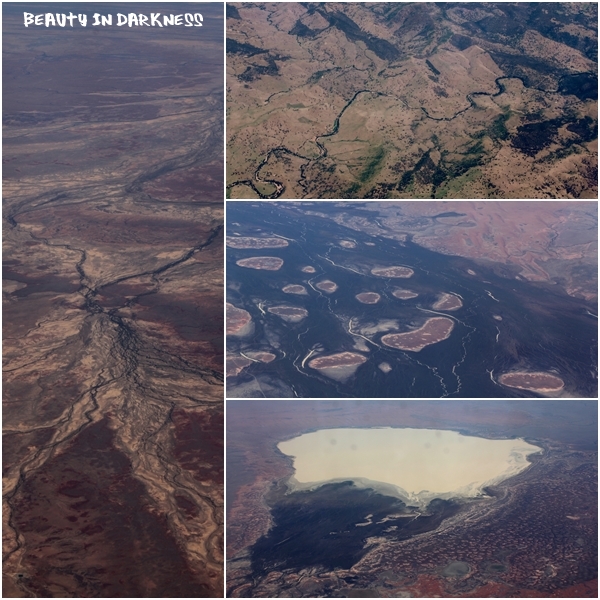 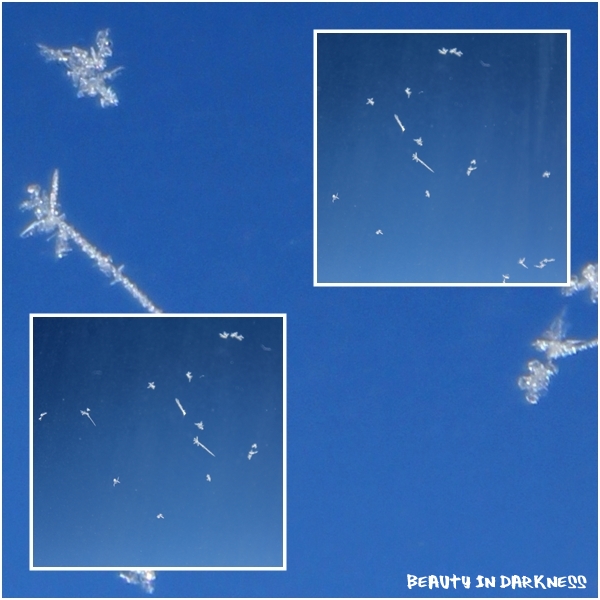 Unbuttoned by Biqque at 8:58 AM

Biqque, rasa2 kalau given the choice to spend an extra night in Sydney or a night in the Blue Mountain, which would you choose? Or you think a day trip to Blue Mountain is more than enough?

Very lovely photos of the 3 Sisters and the aerial view from the plane.
The rocks and terrains around 2 Sisters look like parts of the Grand Canyon in Arizona. I believe that place was also giant rivers a few thousand years ago.

twilight, i wish i can see grand canyon...mmmm...