I was talking to hubby about Vietnam early this year, when he told me that we have partially covered the North and South Vietnam. So he suggested Danang, one of the port cities and eventually, the biggest city in Central Vietnam. And I said, why not? We could bring Pak Ein and his wife along, as my yearly-travel-treat to them.

As usual, hubby did all the preps, right after we came back from Jogjakarta. Meanwhile, I was dreaming big time that hubby would complotting with AA crews, to do a birthday surprise for me, since we were flying on my birthday.

But neah…hubby has always played himself. I tell you why.

2 weeks before the boarding day, we met #TravelholicAwesome at Ely’s house for Iftar. While discussing on everyone’s next trip, we found out that Dan Arif will be going to Danang with his bro, exactly on the same date and time with us. So we jumped into conclusion that we should go together, where we then, cross-referred our itinerary that ultimately turned out to be slightly the same. Well, traveler talks the same language huh? Hahaha.

We use the same route and method to LCCT. I’ve warned Pak Ein and his wife to travel light if they want us to bring them around. Knowing our style of traveling, Pak Ein and his wife combined and packed their belongings into one cabin-size trolley bag, while Pak Ein carried one backpack, loaded with foods and rations. I told him,

I kept on telling him that we normally don’t take rice while travel, but if we happened to see any cheap halal food with rice, we have no issue taking it. I remembered once when we brought him to Medan. Right after we landed and passed thru the immigration, Pak Ein straight away asked for rice! “Nasik ada? Nasik? Murah, banyak, dan sedap!” Hahaha!

So this time, as usual, we brought “serunding” (that we bought from Terengganu during our trip with #TravelholicAwesome), tuna, bread and cereals. And so did Dan Arif. We met Dan Arif and his bro at LCCT and boarded into the aircraft. Earlier, my seat was auto-assigned far from hubby, Pak Ein, and his wife. Indirectly, I was actually being forced to purchase one seat, in order to sit close to them. So I bought. That time, I didn’t know that it will be next to Dan Arif. If and only if I knew, I wouldn’t want to buy it. Hmph!

No announcement being made at 30,000 feet above sea level, neither surprise nor slice of cake from AA crews. But I got a father-daughter handshake from Pak Ein…after being plainly told by hubby, right in front of my face. Pfft!

2 hours later, we arrived at Danang International Airport, and had a clean smooth immigration process. It was raining and the sky was all white and cloudy. Hmph. We walked out from the arrival hall and looked for someone whom hold hubby’s name. He earlier booked a transport to take us from Danang to Hoi An, and opted for Vietland Discovery, which was the cheapest compared to other companies. 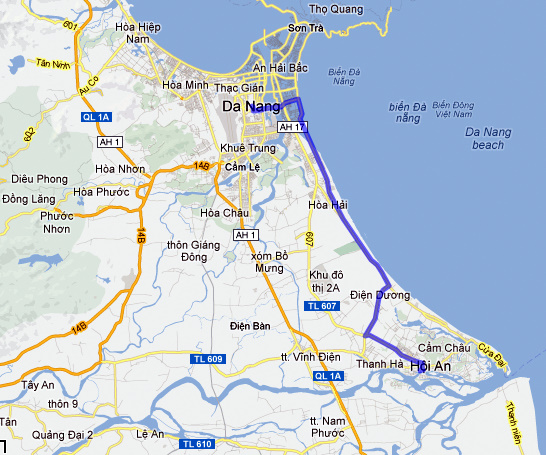 The Viet guy who held the card smiled from afar. He said nothing but only smiled. Even when we took his picture, he still stood still and smiled. He then asked us to wait there while he took the car. Well, he didn’t actually say it in words; he just gave a sign language lah. Funny!

In the car, the driver was sitting straight. Meantime, we can’t stop talking and laughing, while taking pictures. Each of us had a window in this Toyota Hiace, to shoot. Hubby was on the left hand side, I was on the right hand side, while Dan Arif covered both sides. The van was spacey! And the road was super straight, hole-free, bumpy-free, but the rain did fail us sometimes. 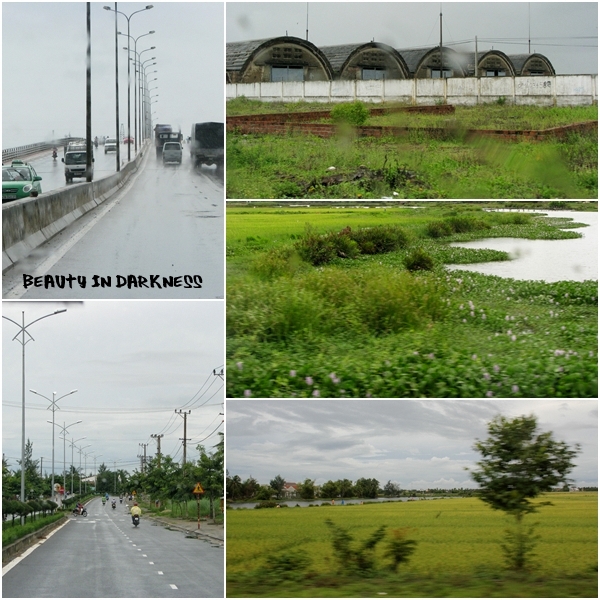 At one point, the driver drove 40km/h on one long straight stretch. We had no idea why he did that, and looked at each other’s face and the road, simultaneously. Seeing this, we still can’t figure out why he drove that slow, like, what was he trying to do and show. Nothing out there. The driver then pointed at the road side. There were beautiful and exclusive hotels, and some were still under construction. Ahhhhh…got it! He was giving us the time to snap pictures! Hahaha! The rain went on and on, till we arrived at the Sunshine Hotel. The first thing that caught our eyes was two rows of silver-colored bicycles. Great! It will fulfill our initial plan to cycle to Old Town. We had a smooth checked-in and paid the driver. The cost of one way from Danang to Hoi An was only USD22. It was six of us, so we paid USD3.60 each. Yup! That’s the good thing if we travel in a group. 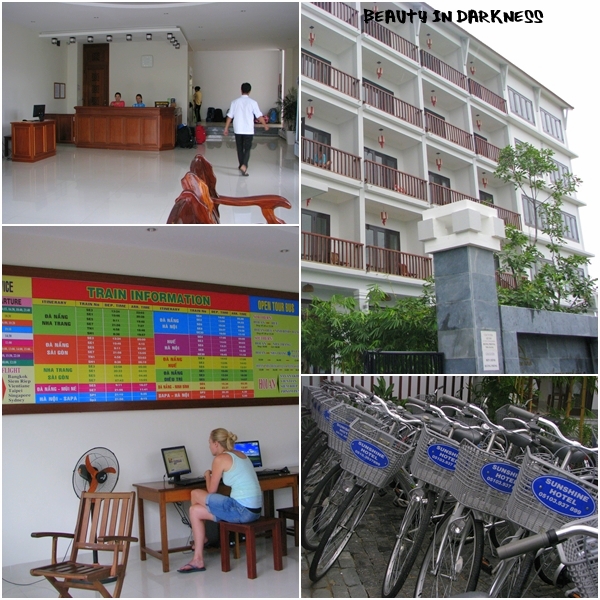 Since the driver only knew how to smile, it was a major communication breakdown when we tried to tell him, to come back tomorrow for My Son stopover. Luckily he loaned his phone to hubby, where we got to talk to Ms.Ha, and sealed the deal.

All of us went into the room and the room was super clean and nice. The room was beautifully decorated with couple of swan towels, with hibiscus in the middle. We can’t hold ourselves from taking romantic pictures, before we dissembled them. We then explored the balcony, where we tucked our head out, and saw Pak Ein and his wife in the next room. Hahaha! Looking upright, we saw Dan Arif and his bro, Aqram, waving at us. 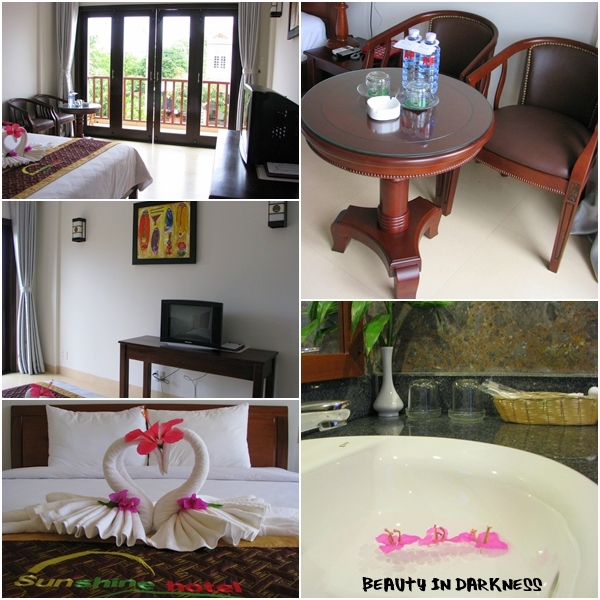 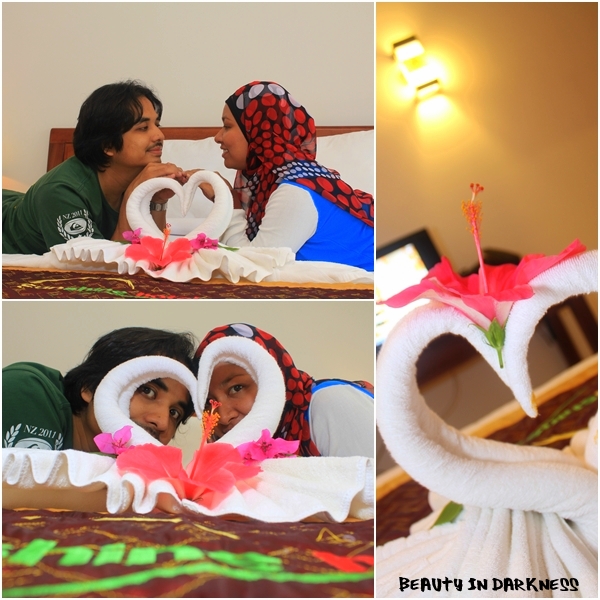 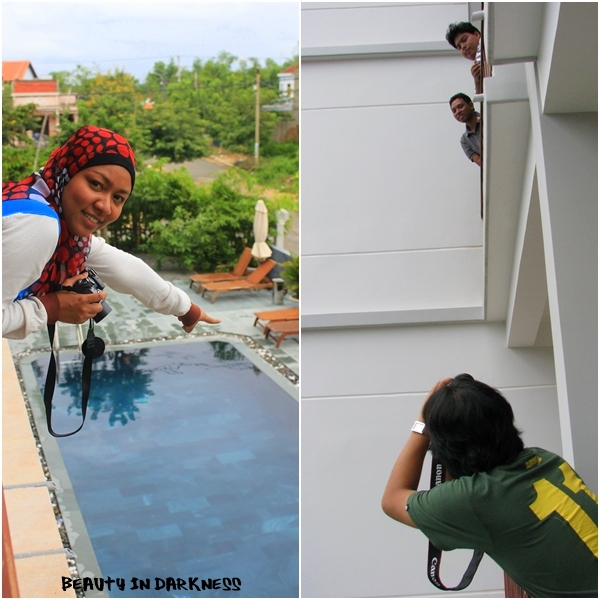 The reason why we chose this hotel was due to its location that is just 15 minutes away from town. It has plenty of rooms with garden or pool views, spa, wellness center, library, car hire, tour desk, shuttle service, and many more. The hotel looks new and the staffs are all friendly. So, the 8.5 scores from Booking.com and excellent remarks from TripAdvisor.com is nothing to be doubt of. 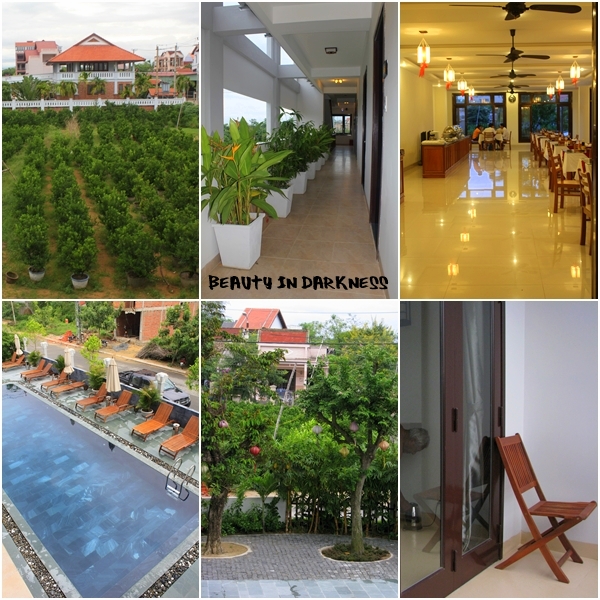 Internet is free, bicycle rental is free, and guess what? Pets are allowed! With no extra charges! How bout that? (I should have bring my Chihuahua Kiki huh?) 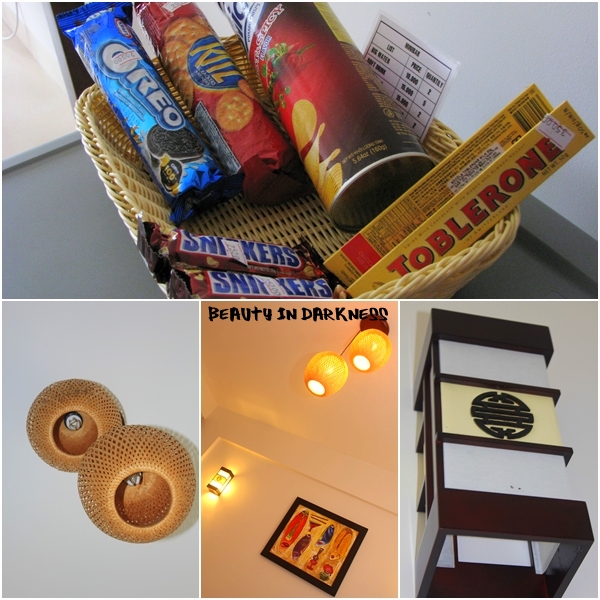 And Pak Ein quickly asked for “serunding” and bread. Lapaq!

nice hotel by the way, how much is the rate per night?

Frankly speaking, I do agree that travel in group is much more cheaper than travel alone especially when comes to sharing transportation. So at the end, your hubby did any birthday surprised for you?

diana, yup. we cut down the transportation quite many la coz there were 6 of us. senang :)