My Son, Hoi An

“The driver already here.” Hubby look through the sliding door.

“Huh? So early? Let me call Abah and Dan.” I simultaneously put on my hijab while calling the other two rooms.

Luckily we were on time. We packed our bags, and got into the car. This time, the driver has changed. At least, the new can speak minimal English compared to the previous Mr. Smiley. At 7.00am, he drove us towards the My Son ruins, approximately 41km from Hoi An. The rain was heavy and we kept on praying to God that it will subside. 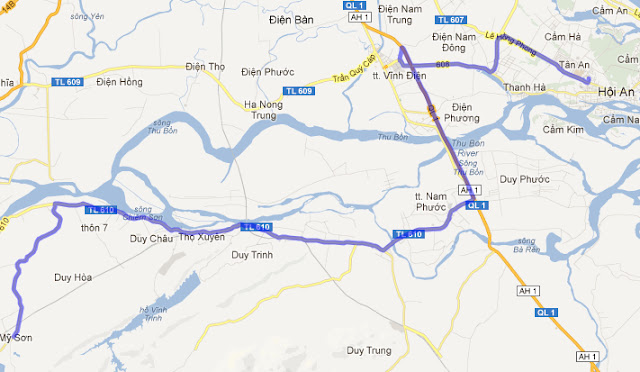 The luck wasn’t with us. After almost an hour of road trip, the rain still poured heavily. Once we reached the world cultural heritage compound, we saw no one at the ticket office. We had no idea whether we were early, or we were the only group who had gone crazy, visit the sanctuary, in this kind of weather.

We quickly got off the car and ran towards the only building before us. The driver then gave us an umbrella, and we took turn to shift ourselves. The ticket office was located in between two halls. We lingered around while waiting for the rain to subside. Nonetheless, it poured even heavier. 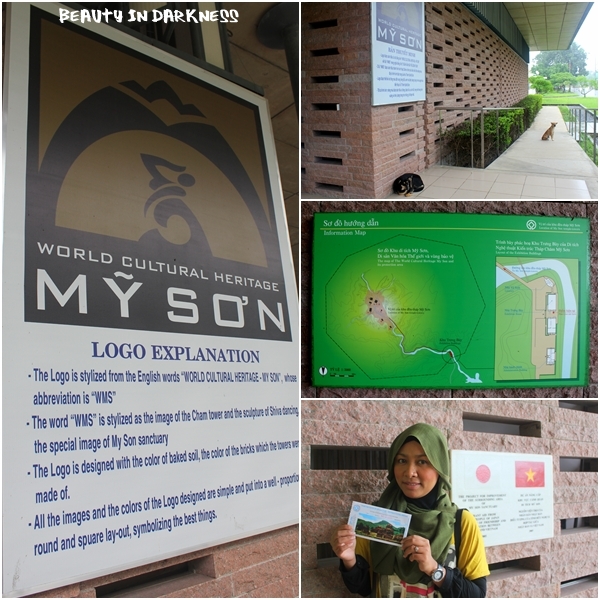 So we killed the time by entering both halls. The first hall to the left contained the overall interactive map of My Son Sanctuary. From this hall, we saw the evidence of Champa kingdom that owed a unique culture of Hinduism, which is now extinct, hence being recognized as a World Heritage Site by UNESCO in December 1999. Stupas in various sizes, charts and diagrams, stone stele artifacts, everything that are saved from the ruins. 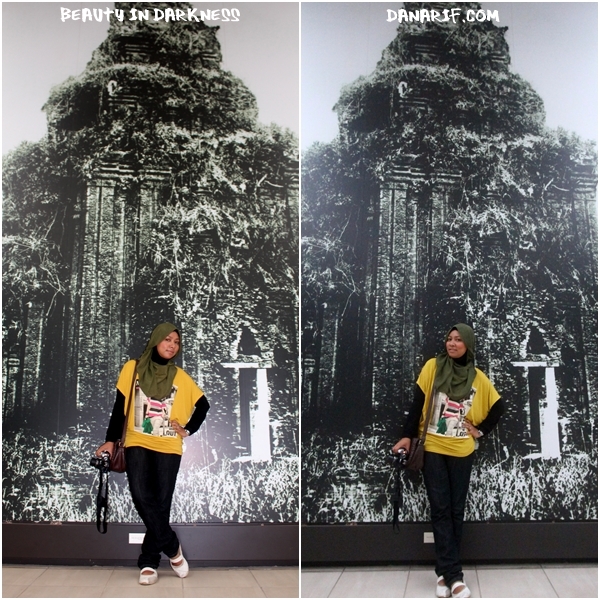 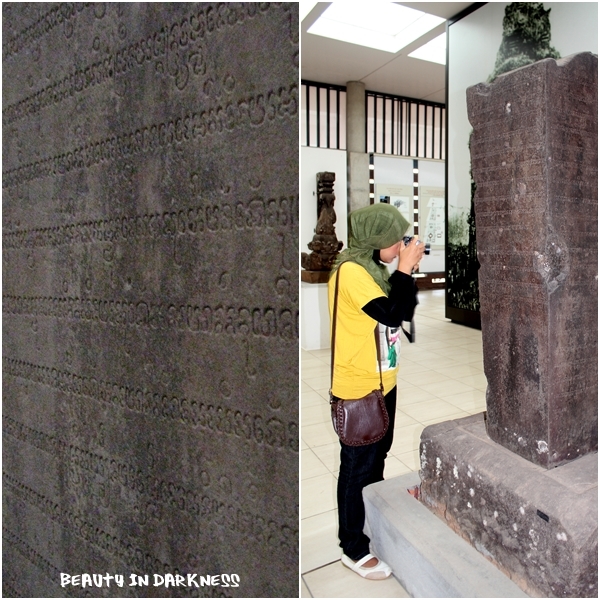 Looking at the huge map, this place was formerly a large complex of imperial city of Cham kindgom, that kept more than 70 religious relics, from temples to towers, with complicated red brick designs. Anyhow, it is said that the prime foundation of the ancient complex was a wooden temple to worship Shiva, which later was destroyed in a big fire. From there, the historical mysteries were unveiled by scientist, where this site was also noted as the burial site of kings and religious leaders. 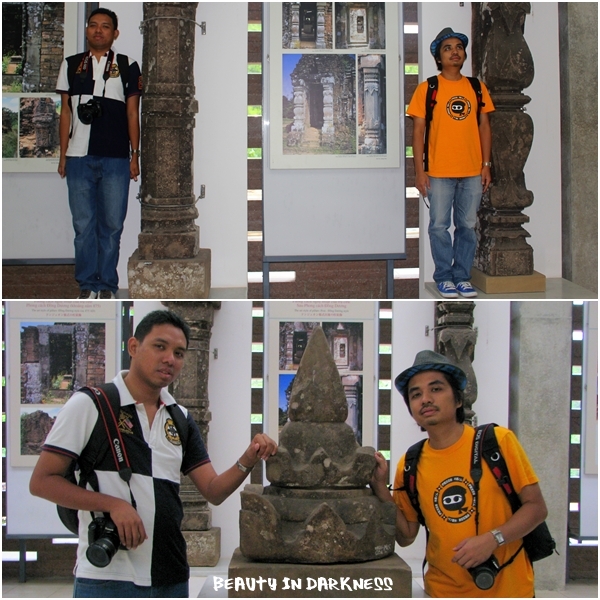 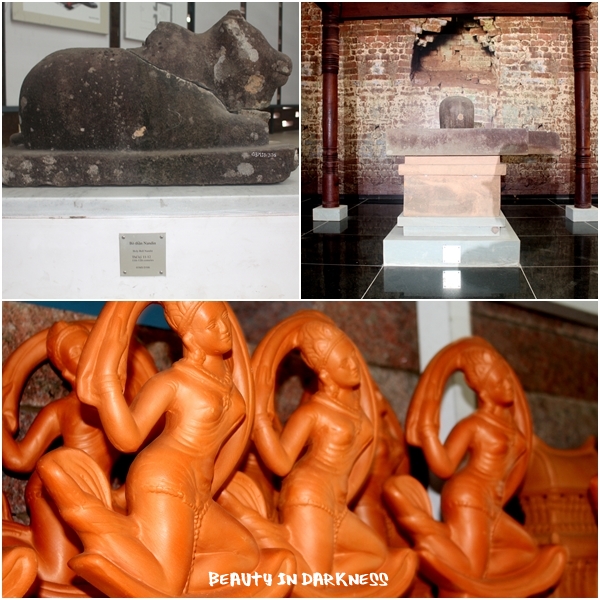 Hubby then asked me whether we should continue to visit the ruins or not. We later decided to proceed since we had nothing else to do. So we went into the second hall, where this place was decorated like a speech-giving hall. There put two long tables, one rostrum, with bright turquoise and red curtains as the backdrop. On the walls, they hung pictures of leaders and sanctuary sites.

“Let’s be dramatic!” I suggested.

Dan Arif then set his camera to video mode while I arranged the rest according to their roles. Aqram acted as the prime minister, hubby became the prisoner, and I became the translator, while Dan Arif, Pak Ein and his wife, were the subjects whom agreeing to the punishment that was being read to hubby.

And the whole bunch of government ministers, happy with the sentence. 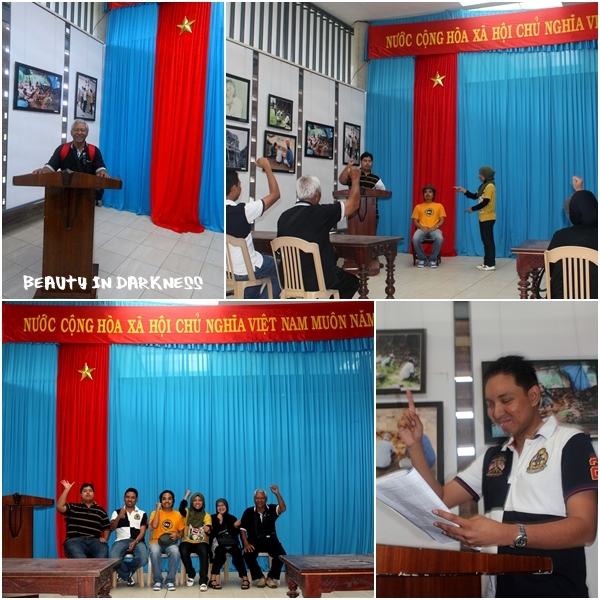 Dissatisfied with the act, Dan Arif then re-read the whole script again, but this time, the whole sentence became even funnier! He spoke like a drunken Vietcong! Hahaha! Haih…how I wish he put it in our Danang Video.

“The rain ain’t going to stop.”

We walked to the ticket office and purchased 6 entrance tickets (VND60,000 each). I also bought myself an umbrella to top the existing two umbrellas, given by the driver. He took us the most ends of any vehicles can go. He dropped us there and returned back to the reception building. 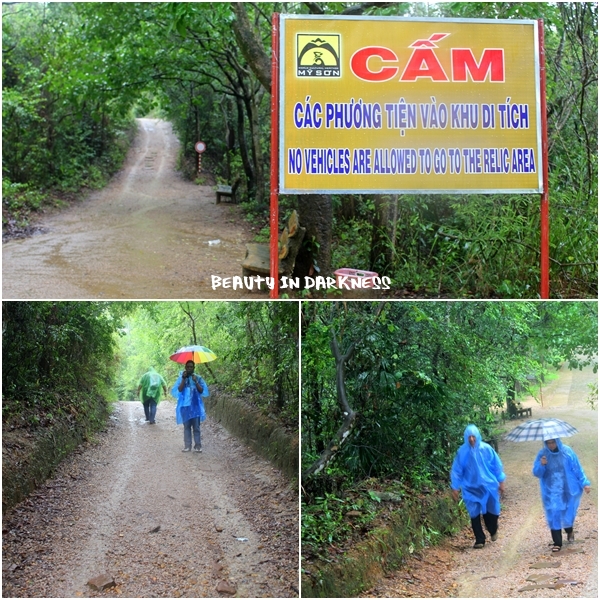 “Hello…we have to walk back?”

“I guess so…” Hubby had no idea whether the van will come back or else.

“WHAT? IT WAS LIKE 1 KILO! ERR…RIGHT??” I overacted. Looking at my hideous shoes. Sigh. 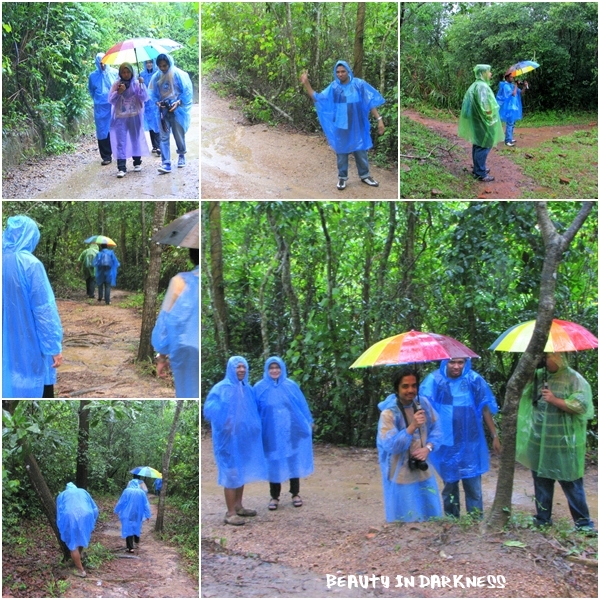 My Son’s Champa towers are classified depending on the position of those towers, and according to the architecture styles. This area is super huge that they have to group it into several sections.

Group A consist of 17 works. Pagoda tower. The main temple located here and considered as masterpiece amongst all. The height was 24 meters before it was broken down by a bomb.

Group B, G, D consist of 27 works. Market tower. The principle temple located here with carved elephants under a tree, where two trunks touching. Anyhow group G was seriously damaged due to its location on a low hill.

Group C consist of 7 works. The roof tower is boat-shaped with lotus and petals that symbolized divinities.

Group E, F consist of 5 works. Hd Khe tower. These groups are separated by a stream and most of the towers were broken down.

Group H consist of 4 works. Chess tower. This group also located on a low hill and was broken down at war.

Group K consist of 2 works. Similar to group G and H, all towers were badly damaged, left only one small tower with spear-shaped vault on two pillars.

Other works are L, M, N. These groups are totally isolated from the central area and were broken down.

We walked towards the jungle, via small pathway. I must admin that the scenery would be gorgeous if it wasn’t raining. About 50 meters walking in the rain, we finally saw the first ruin, under the sweating ponchos. We climbed up and had a quick tour around the one and only piled up red bricks, that we believed, one of the main entrance pillars of Group H. 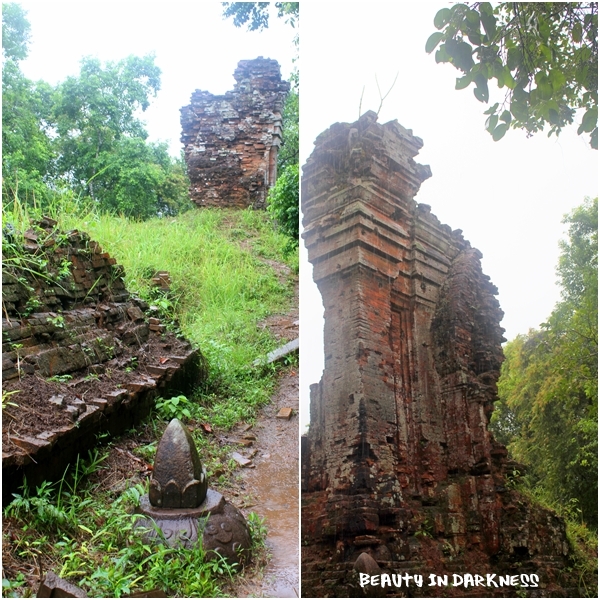 “Omg…I passed through the muddy grass…without any bloodsucking leeches on me!” 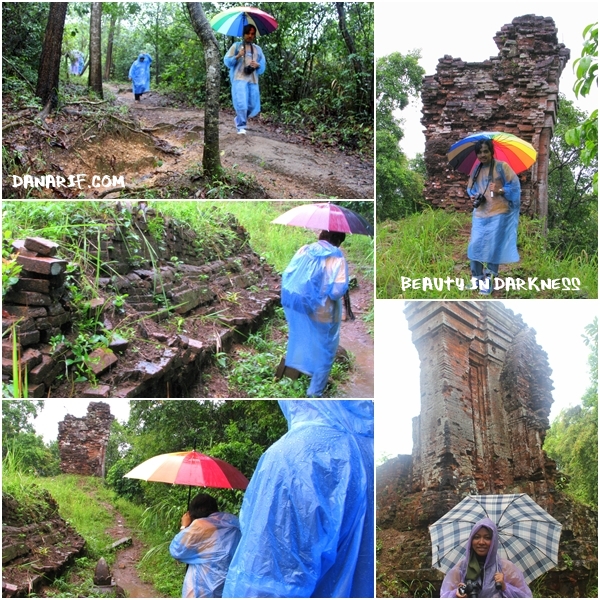 We then continued walking along the man-made trail until we saw two wooden buildings before us. The left one was a café and souvenir center, while the right one was for cultural show. Aqram, Pak Ein and his wife waited there, while the three of us walked towards the biggest ruins of Group B, C, and D. 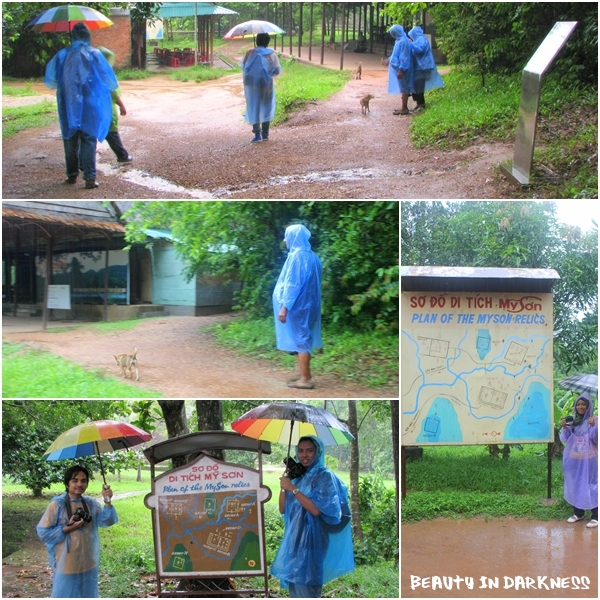 Each of us carried an umbrella and we started to explore the whole complex. Some of the relics like stone stele and lingga, still in tact, though most of them were badly destroyed.
B group contains the tower gate of the temple that worshiped God Ganesa, God Skanda, with Vishnu sitting on the sacred snake, Naga with 13 heads. Whilst, minor towers were dedicated to God Grahas (SunSurya, MoonSandra, MarsAgni, MercuryVaruna, JupiterIndra, Venuslsana, and Saturn-A Yama), symbolized seven days in a week of India’s Saka calendar.

C group contains main temple with boat-shaped and false windows. Praying figures of Shiva and such, were carved nicely with Cham King under it. This traditional Cham tower has 3 parts, the foundation (Bhurloka), the body (Bhurvaloka) and the roof (Svarloka). Omg, the names were sooooo Pavlova! Hahaha!

Aqram, Pak Ein and his wife later came and joined us. I quickly set the camera in self-timer mode, and snapped few pictures of us. Without tripod, I had to put the camera on the ruins brick, covered with an umbrella. Pak Ein told me not to go too close in between bricks, afraid of snakes or other poisonous animals. 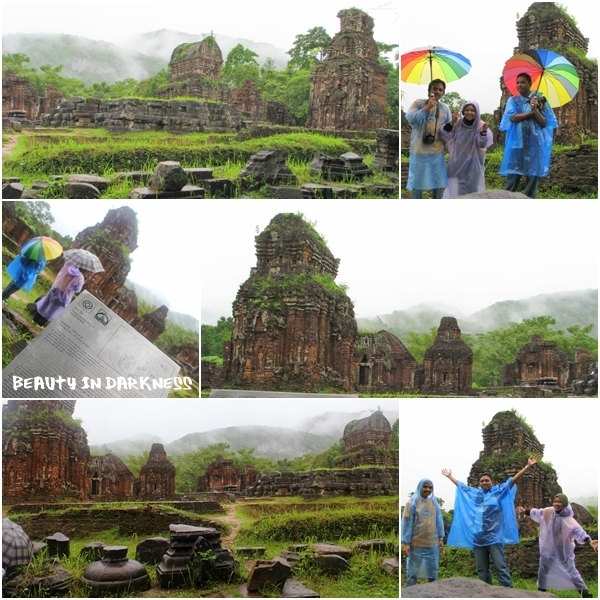 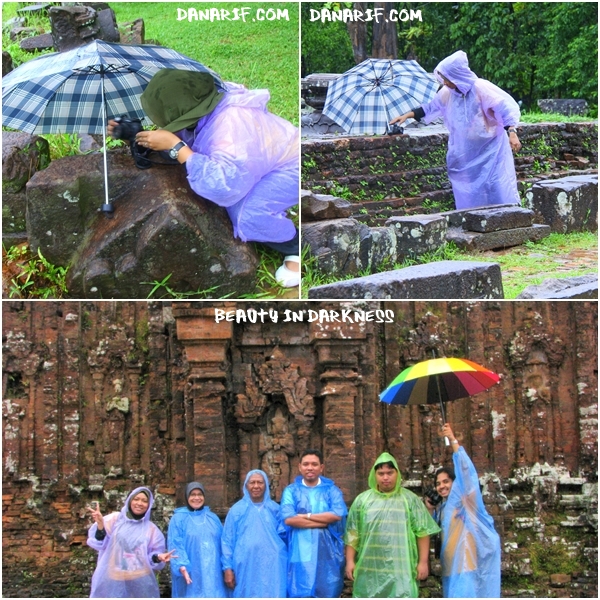 We then walked to the D group, where this area contains two long rectangular houses that already broken down. This place was for receiving pilgrims and preparing the ritual objects for the temple. I asked Dan Arif to pose next to the linga, that its symbolization, stills a debate within Hinduism. Some said that it is male creative energy, while some said it is purely divine energy. Anyways, Dan Arif posed like getting some holy water la konon. Tapi air hujan jer. Hahaha! 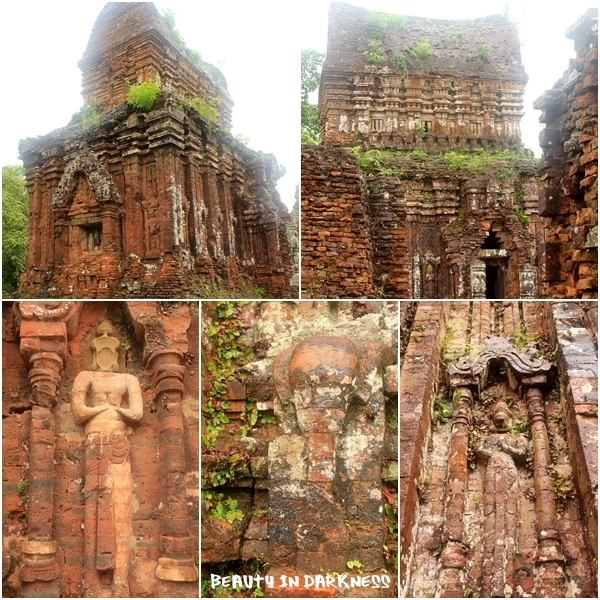 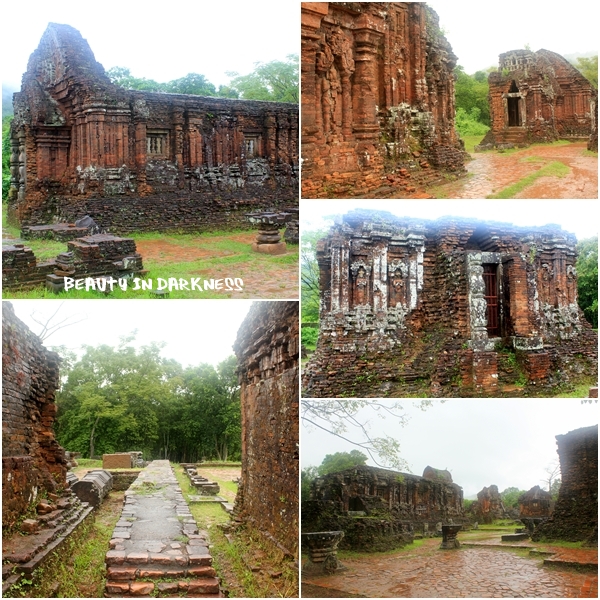 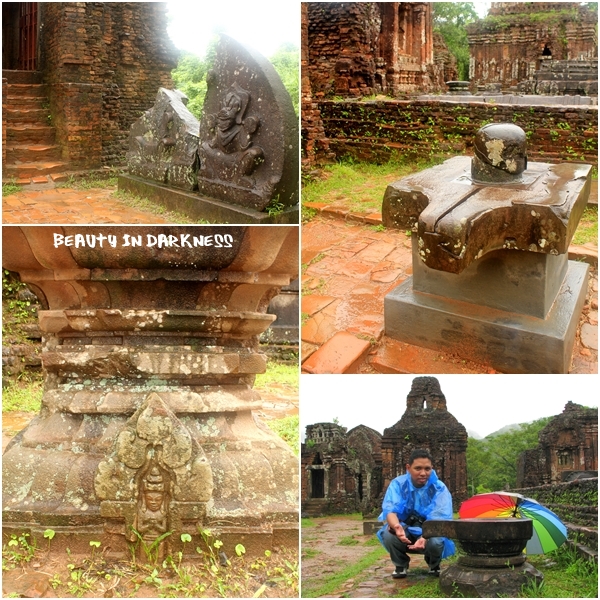 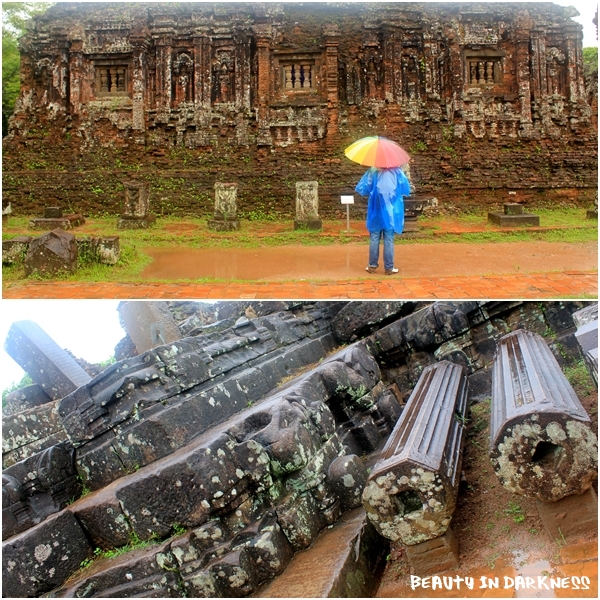 On the other hand, Pak Ein and his wife tried to be funny, by posing behind the sculptures, inside the tower rooms, in front of wall towers, and many more. Glad that they enjoyed the trip, though they kept on reminding me, “Nanti bawak abah pegi tempat shopping na?” Like every half and hour. Yes, the place where he can buy everything for the villagers. Hahaha! 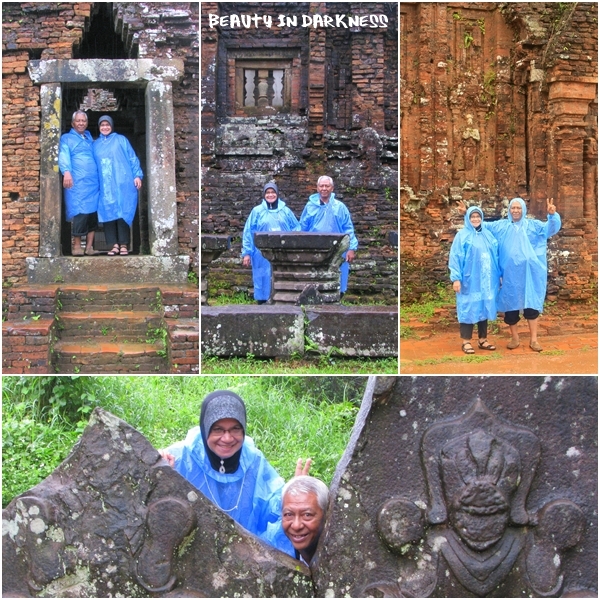 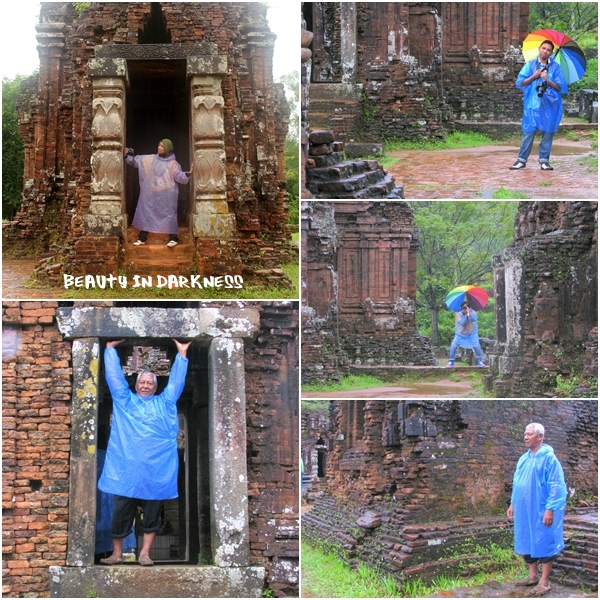 “Eh, let’s do something funny for the video!” I suggested to Dan Arif, while he was locating his camera on the brick.

In 0.05 seconds (wah like Gaban), we formed a line and marched! In ponchos! Hahaha! It was hell of fun when no one was around, except for us.

The rain still drizzled. We finally satisfied with the catch and walked towards where we came from. Back at the show hall, we sat for a while and waited, in case there is a show. But there was none. One huge group of visitors then came and joined us, so we walked to the souvenir shop, where Pak Ein started to get crazy for the Viet conical traditional hat. “We should have bought this hat before, easy to walk in the rain.” He said.

In a minute, I saw him taking 10 pieces! “Untuk orang kampung lagi ke?” I thought he wanted to give to the villagers again.

Cool. So all six of us bought and straight away wore it. To add the fun, we danced in front of the show hall, in replacing the missing dancers. Hahaha! 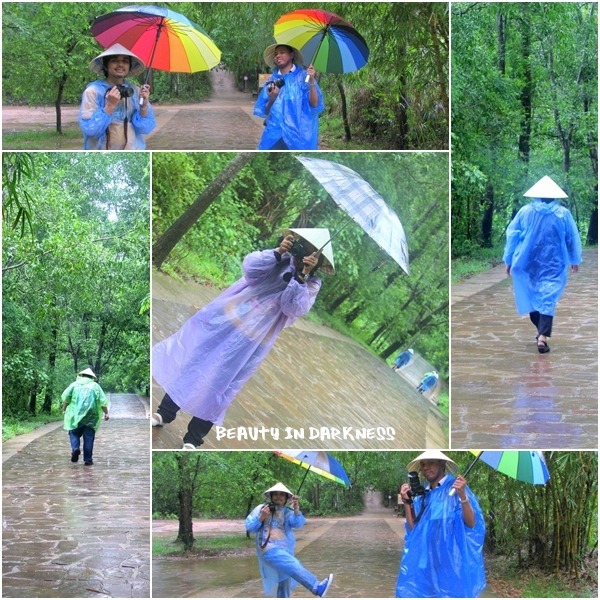 “So, go back to hotel and then cycle to Hoi An town?”

“Yup, lets find our driver then.”

Now...who says you can't take pictures in rain, huh? Worry not about hair, neither your cloths, nor your shoes, slip in the poncho, hold an umbrella, and you a good to shoot :)