On the way back from My Son to Sunshine Hotel, we had a cat nap in the van. Once we arrived at the hotel, we had quick break and did our things. We cooked instant noodles and ate tuna with bread. 5 minutes to 12.00pm, we checked out and left our bags at the reception area, before we got into one mpv cab, to transport us to Hoi An town.

In less than half and hour, we reached Hoi An town, the same place where we cycled, the day before. The weather still not with us, but not too bad, it just drizzled.

“Take out your cone hat and wear.” Hubby suggested.

And so all of us walked in between those ancient buildings, with cone hat on, blended in with locals, who were none of them wearing one! Hahaha!

While walking, Dan Arif reminded me to stop at any souvenir shop that we bumped into. He wanted to buy bulk of postcards for #TravelholicAwesome and few others. We got lucky when we found one small shop that sells none other than postcards. Dan Arif and I went in and started to select few postcards, while hubby, Aqram, Pak Ein and his wife were still on the road.

Then we saw something that was so mindblowing!

A man on a bike, with a goat on his back! 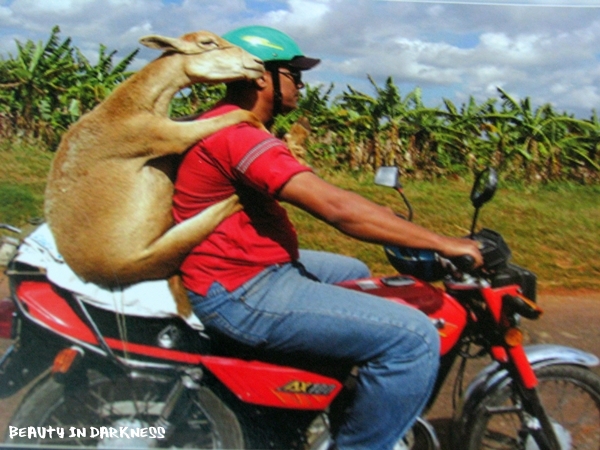 Well, that was what we saw on the postcards. Not only that, they had pigs on it too! Not one, but more than three! Who says animals don’t ride? Even a cow can be transported via a bike! Hahaha! We then walked towards the ticket booth and passed through without paying any fees. The back alley was indeed, a nice place to shoot. With the presence of tricycles, boats, and antique buildings, Hoi An reminded us of straits settlements that we have back in our country, Melaka and Penang. 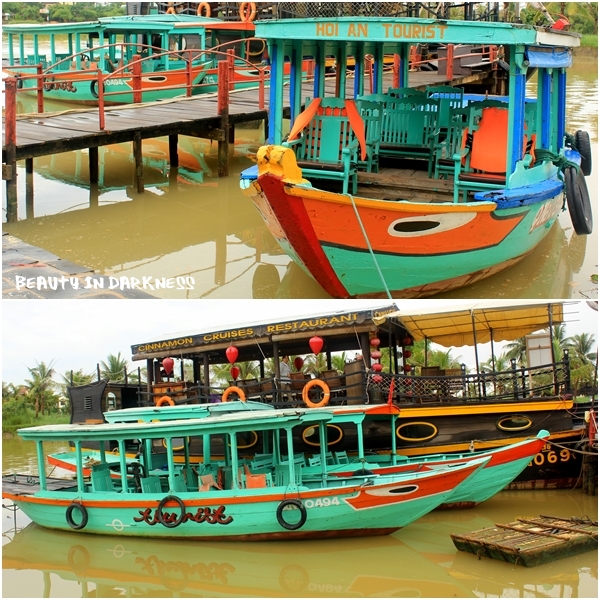 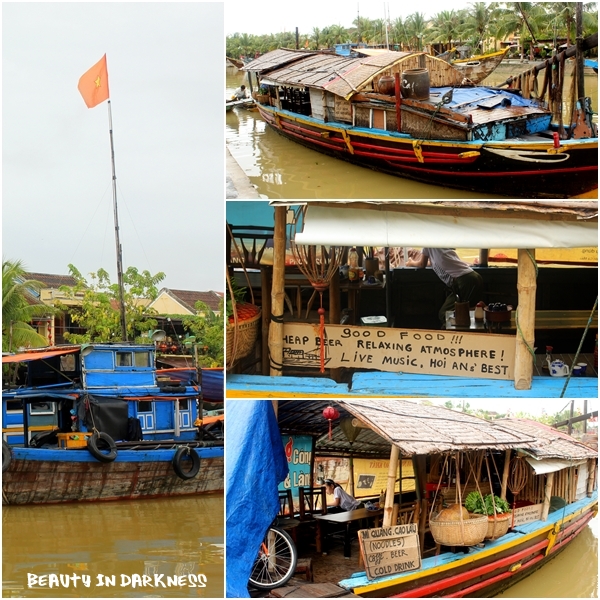 “The Japanese building during day, not really amazing huh?”

“Em. Well, sometime, things look amazing under the lights, while some don’t.”

We headed to the riverfront, where we saw a row of yellow antique buildings. On the right, yellow river. Hahaha! Macam teh susu! There were boats along the river, locals were fishing… 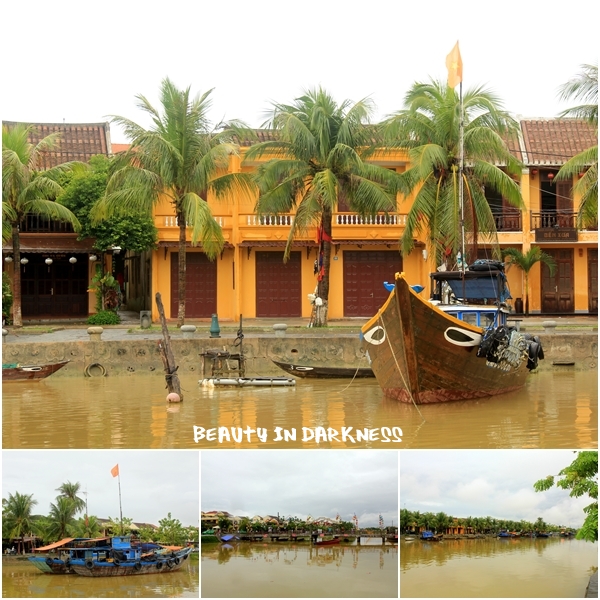 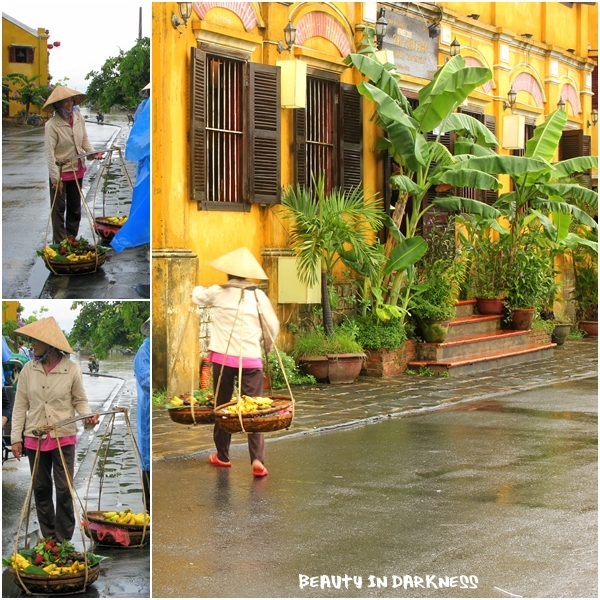 Pak Ein quickly walked towards two locals who were actually handling rods, facing the river. Pak Ein suddenly lifted up the net and examined one medium-sized fish in it. He then tried to have a conversation with the locals, but turned out to be a duck and chicken talk. But he was happy. In point of fact, he was “teaching” the local how to fish! Omg! 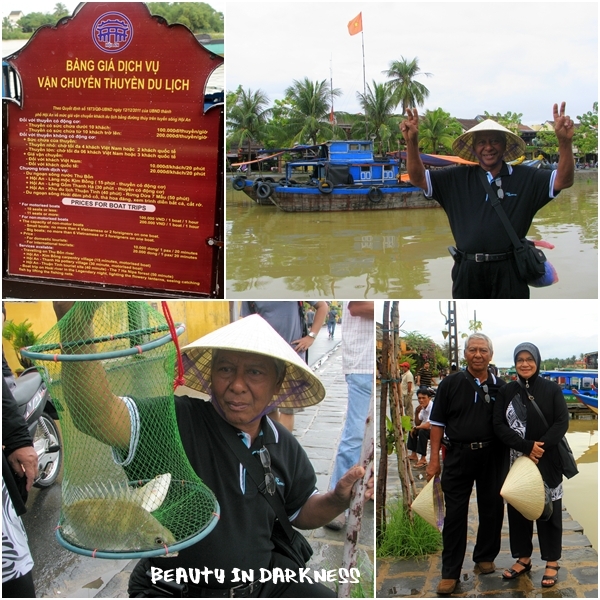 (Note: Pak Ein is such a diehard fan of fishing, boat, river, sea, anything close to that.) 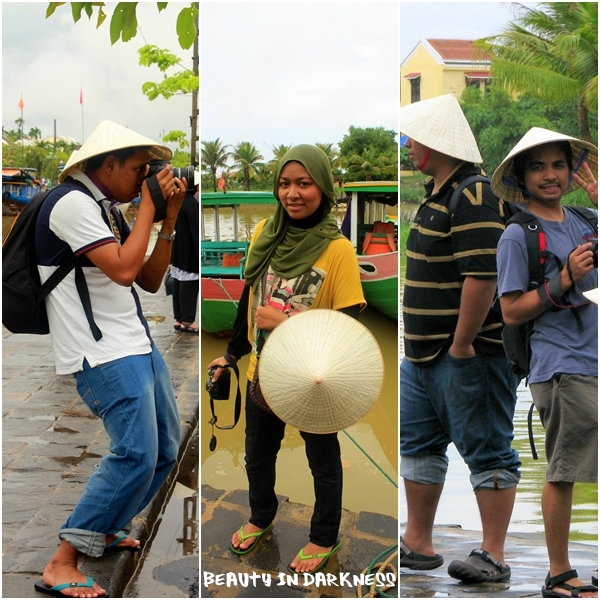 We then started to look for those famous old houses, as per gazetted in Hoi An places to visit, such as Tan Ky Old House, Duc An Old House, Phung Hung Old House and Quang Thang Old House. All looks the same but each has its own history and story. These houses are well preserved by the Government, as a near-perfect example of 18th century merchant’s residence. Almost all houses are equipped with antiques furniture and decoration, with small central courtyard in the middle. 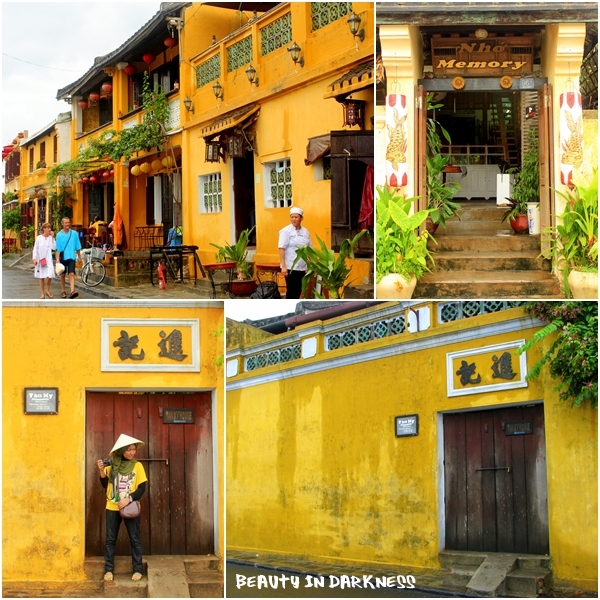 I quickly referred to my Cookbook and looked for the operation time. It is closed from noon to 2.00PM.

“But the door looks different lah…?” I showed the book to hubby. Without a doubt, we had reached the house’s back door! Hahaha!

Enough with old houses, we passed the deal and photo-walking. Until, we stopped for a group picture in front of one of the restaurant’s back door. Who cares! Adding to the craziness, we had an antique photo shoot at one of the back alley. Cool! 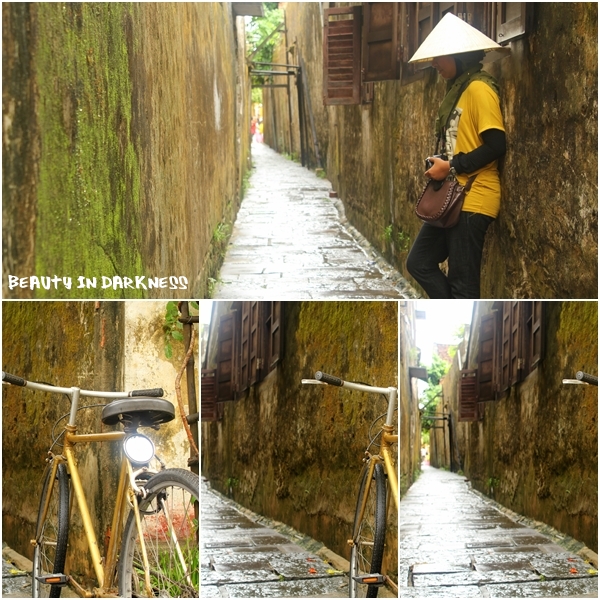 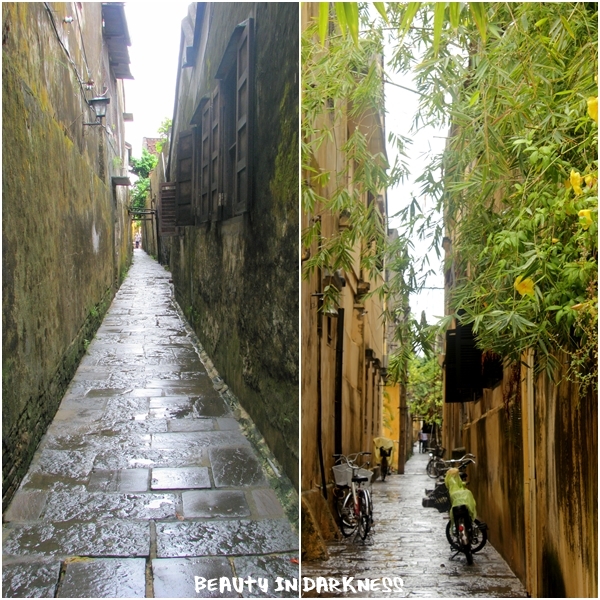 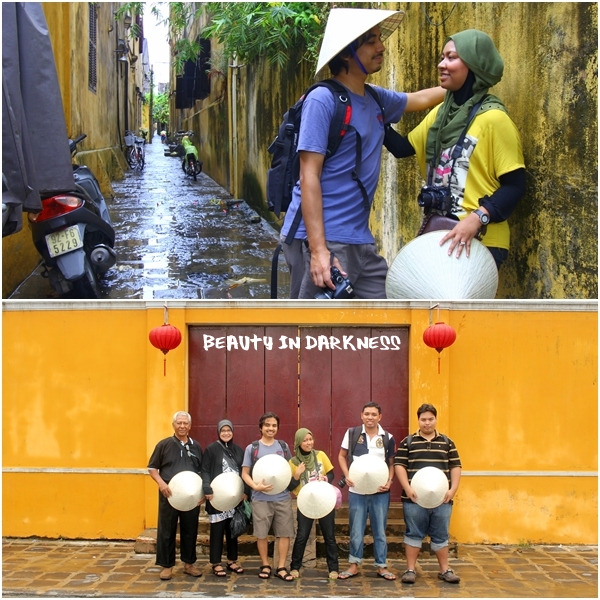 We then stopped at Folklore Museum that we bumped into out of a sudden. Dan Arif and Aqram started to be kiddos by imitating their super warriors by throwing cone hats to each others. Hahaha! Pak Ein didn’t want to miss the chance, so he later, had one tourist pose in front of the museum. 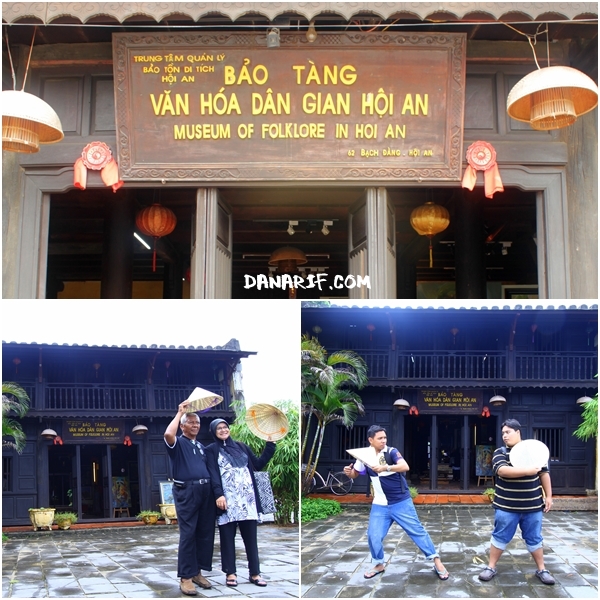 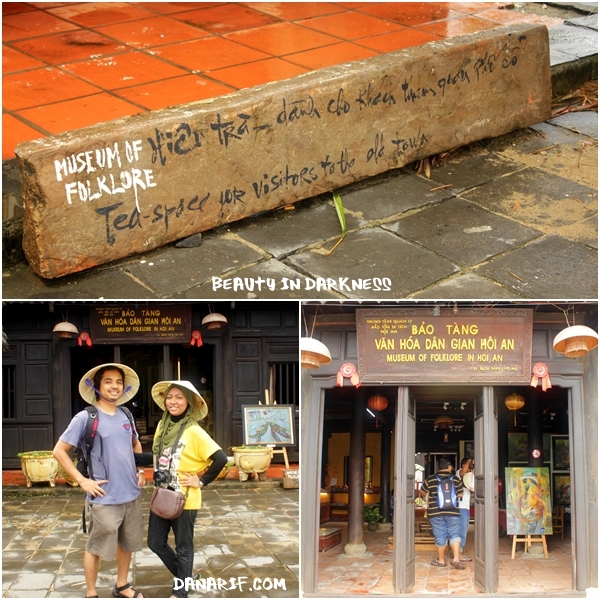 Having no other places to visit, we entered the museum and had a lazy browse on those displayed objects. These objects are said to be 90% originals that aged more than 100 years, sorted by topics, like folklore, traditional, occupation, clothing, and games. 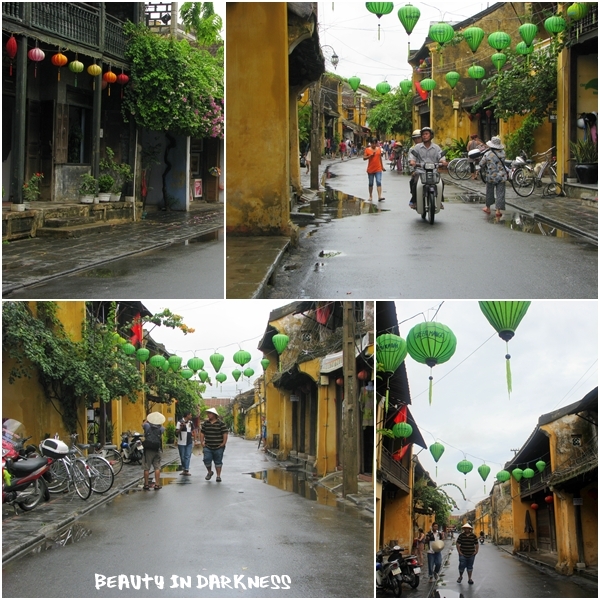 I was stunned with the local shawls where they printed beautiful and nice motives of butterfly. I tried so had to resist the bargain and I succeeded. Though it was gorgeous, I closed two eyes and walked away. I hate myself for being cheapskate! Hahaha! Anyway, I helped Pak Ein's wife to get a good bargain for 3 pieces of t-shirts, roughly RM7 per piece.

We then walked towards the main road and looked for a cab. While getting a cab, I saw street vendors selling local fruits and foods. One of the aunty noticed that I was taking her photo and she quickly covered her face with the cone hat! So quick you know. I was in zooming mode actually, but she still noticed me. Hahaha! 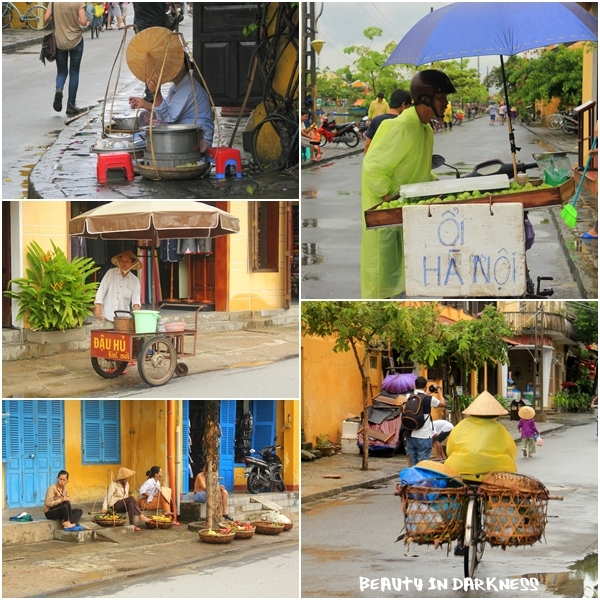 Around 3.00PM, we went back to Sunshine Hotel to take back our bags. We used the same service (Vietland Discovery) to transport us from Hoi An to Danang, with good price. 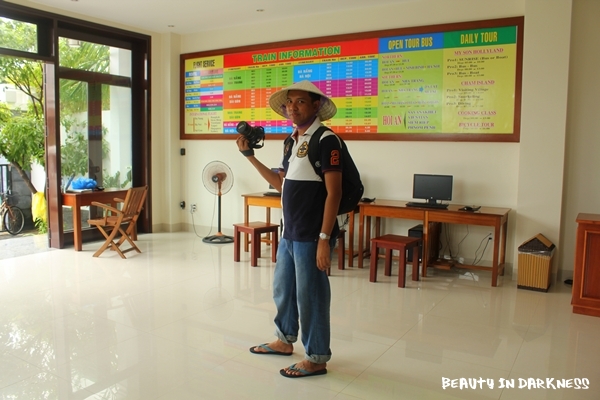 Unbuttoned by Biqque at 5:22 PM

such a picturesque town, Hoi An is...how I wish I can spend more time there...

nice back alley photo ! especially with that one bicycle ( :