~Page Two~
Ashburton To Dunedin: When The Sekupang Team Meet


The day was bright and the sky was blue. We shifted driver and this time, I was the one who drove, since hubby wanted to do the photo capturing. We were so excited to start our journey, especially when we saw brownish trees along the roadside. Once in a while, we stopped due to our eagerness to snap the sakura-like flowers by the housing area. 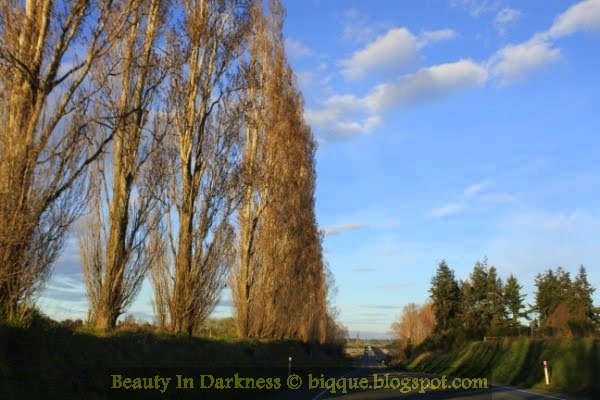 “Omigod! Sheep! Sheep!” This was where our fascination started. 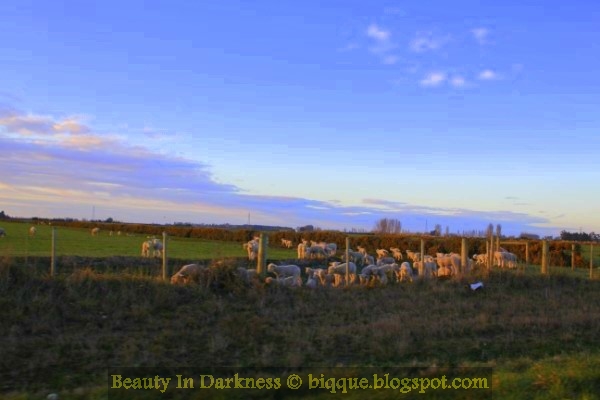 “Tangkap! Tangkap! There! Over there! No! Over here!” The craziness has conquered us.

The grass was green and the sky was blue, exactly the same as what we have seen as Windows XP wallpaper. 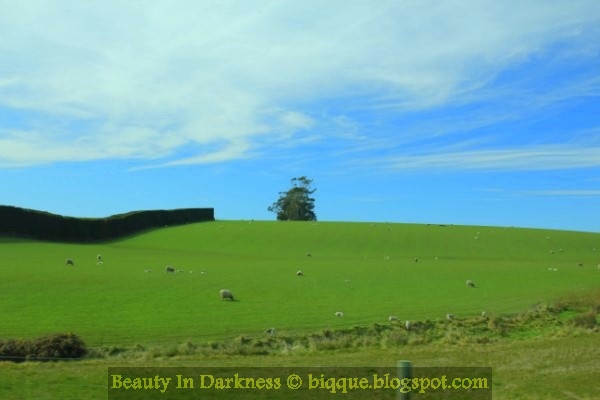 “Aaahhhh…now I know where the wallpaper came from…” Ass-U-Me.

Hinds - Rangitata - Winchester - Temuka
We passed by Hinds, Rangitata, Winchester, Temuka, and more sheep and road signs came into the picture. There weren’t many vehicles on the road that eased us to cruise, leisurely. 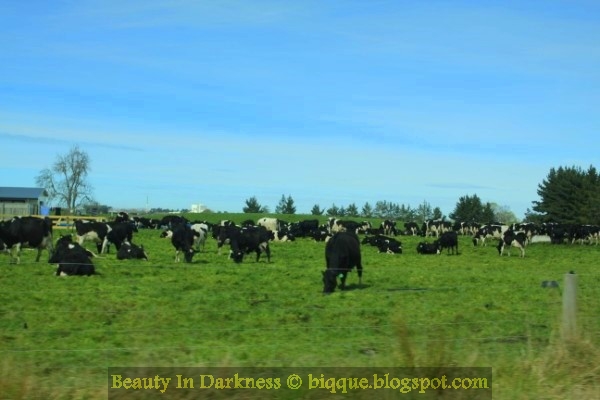 We had to slow down when we approached the small town like Winchester and Temuka, and follow the speed limit. Both towns were quite vacant coz it still 7.00AM. We then continued our journey to Timaru and stopped at Pak’nSave, to see what we can have for breakfast. 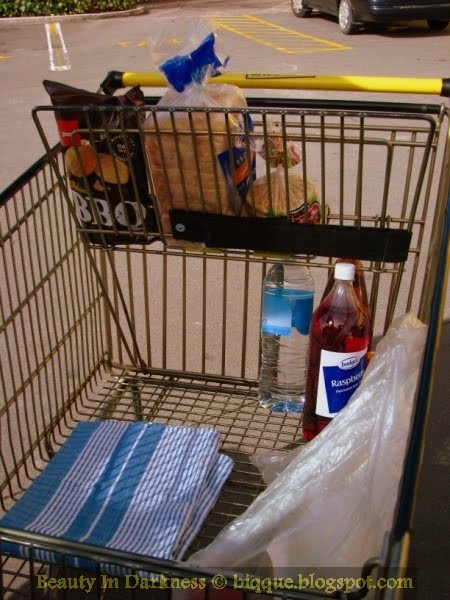 “Hah masalah ni takde sudu…” So I had to use that super tiny stir that I got from Caltex (hot drink) and poked those eggs and ate. Yummeh!

Timaru
We then stopped at Timaru i-Site, bought fridge magnet, and captured few pictures with that stiff uncle on the bench. Looking at the other side of the road with various countries’ flags made us wondered…what is there to be looked upon. 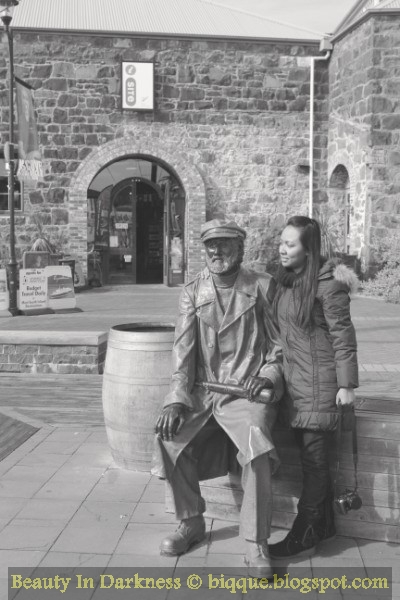 “Wahhhhhhhh cantik gileeeeeeeeee!” With breezy air and clear sky, we stood before the sea that surrounded with beautiful cliffs and super huge waves. 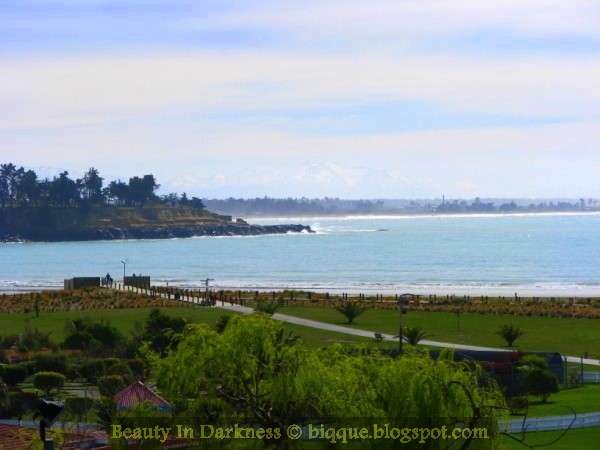 So we parked in front of the museum and walked down the road. There were church and historical building that seemed to be under the influence of Edwardian and Victorian architecture. 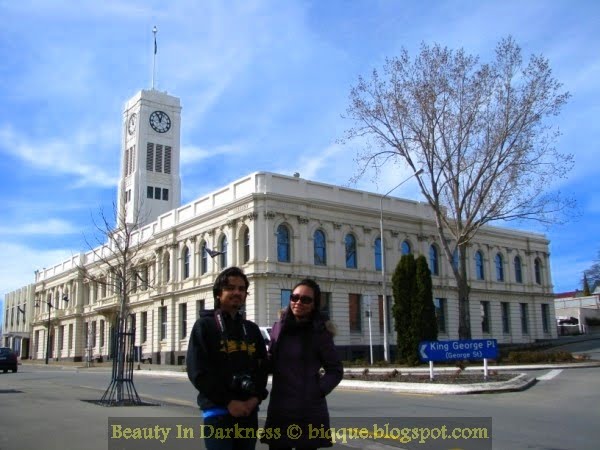 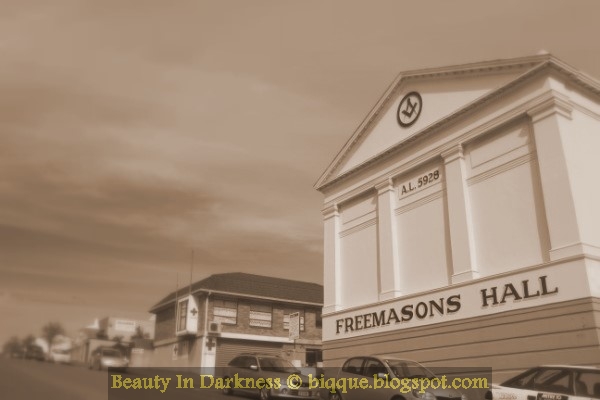 Pareora - St. Andrews - Makikihi - Waimate
We left Timaru and had a de-tour to Waimate, where we had to pass by Pareora, St. Andrews, and Makikihi, beforehand. The reason behind it was to see the famous wallabies. But for another 6km lencongan, takpe la time kasih je. So we settled with black and white cows, and more sheep as substitution.

Again, we visited the i-Site, bought fridge magnet, and had a quick chat with the volunteer, where he suggested to go over the nearest mountain, to see the whole town. Tak cukup masa la pakcik.

“And where we can find this man?” We asked him, while pointing at one of the postcard.

“Well, you can walk down this block and he just right next to the clock tower and toilet.” Kat toilet ha ko letak mamat ni. Meh cium skit! 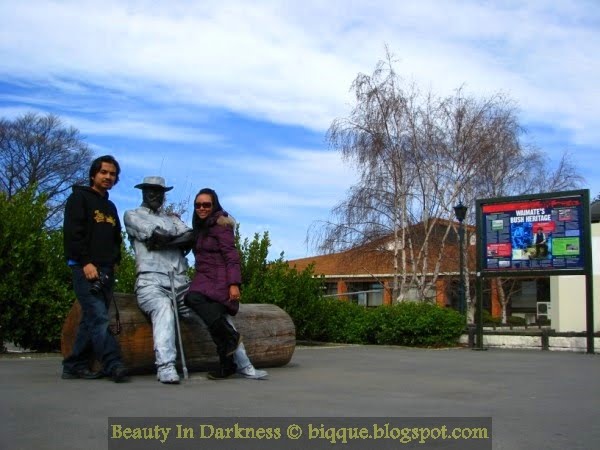 We continued our journey and suddenly “Alamak! That yellow barn!” We had passed the yellow barn for about 200 meters. “Are we turning back or not?” “You want or not?”

“Ok, ready with your camera...” “Ready…” “Tangkap!” These two crazy couple can live like this…can you imagine??? Haha! 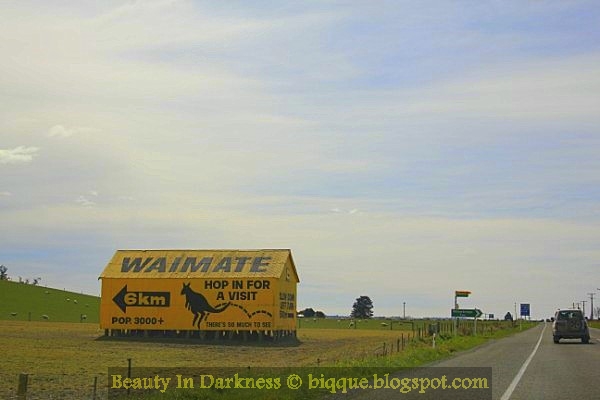 Again, not far from the barn, we stopped and I quickly went out from the car and pointed to the cows over the hill. Camne la bleh naik gemuk-gemuk camtu?! 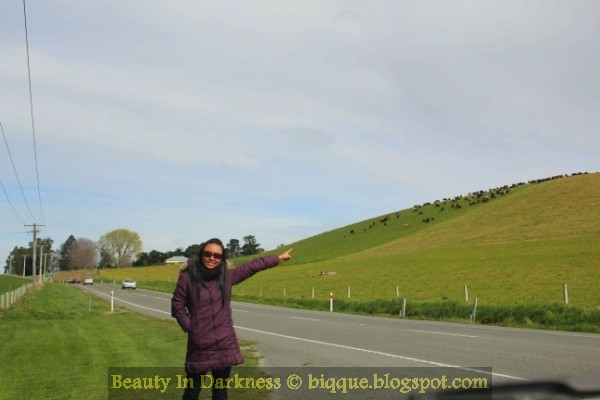 Oamaru
Approaching Oamaru, we saw more sculptures and artistic statue. We looked for the i-Site and parked the car right in front of it. I grabbed few fridge magnets and we started to walk around the town, snapped lots and lots of pictures. 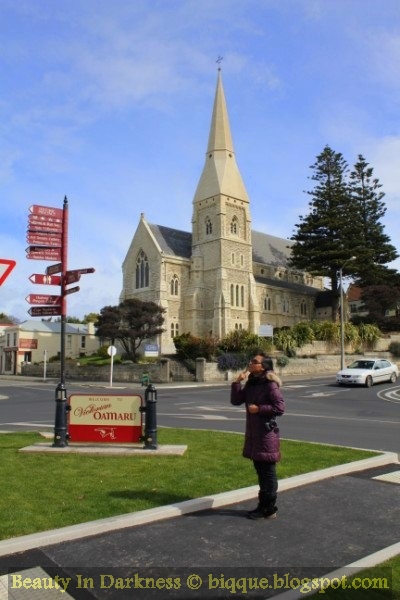 In between roads, there were creative and imaginative figures. “Eh eh, keta ni benti la…lintas, lintas cepat.” That is one of the good culture that they have, where pedestrians have more priority. Kalo kat Malaysia, mampos ko kena hon! Lagi laju keta tu ada la! 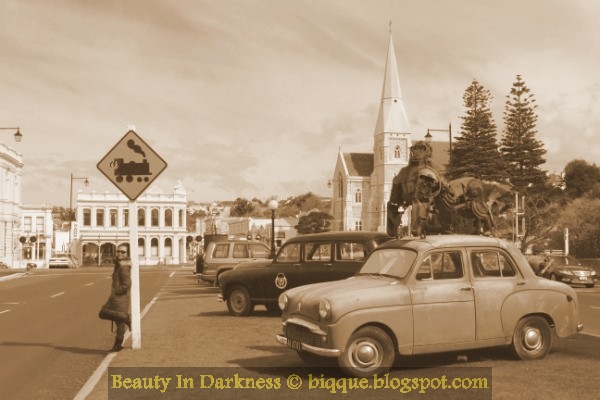 We also went to the Harbourside where an old steam train called steampunk was exhibited. Almost all buildings at this area are classic and traditional. Sungguh indah dipandang. 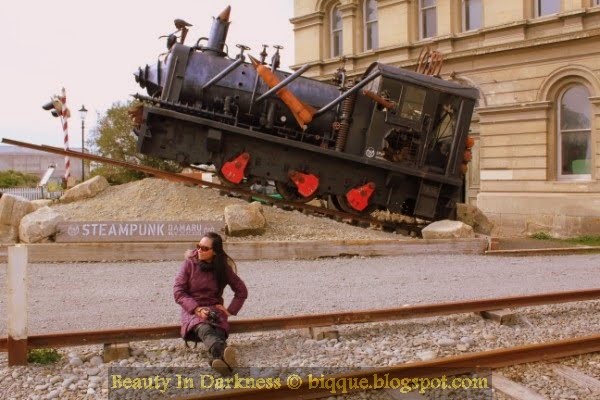 Maheno - Herbert - Hampden
We then started the engine, bukan engine ketapi, tapi enjin keta, and passed by Maheno, Herbert, Hampden, before we stopped at Moeraki Boulders. 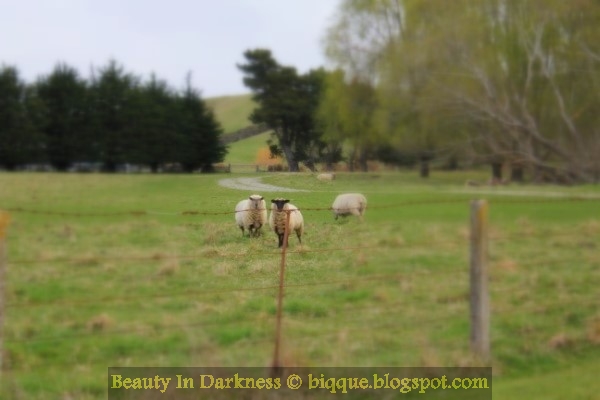 Moeraki Boulders
Ok, back to Moeraki Boulders. It’s been said that these boulders are spherical and started to form 55 million years ago. Hamik ko! Aku tatau la zaman dinasour ke zaman ape, but they are vanishing now.

At first, we parked at the motor camp area, where we could see the boulders from a distance. Akibat malas berjalan, we drove to the nearest café and walked down the trail, by contributing NZD1 for two, instead of NZD2 for each. Hehe…bleh la, takde syiling masa tu. At least, we bought fridge magnet apa... 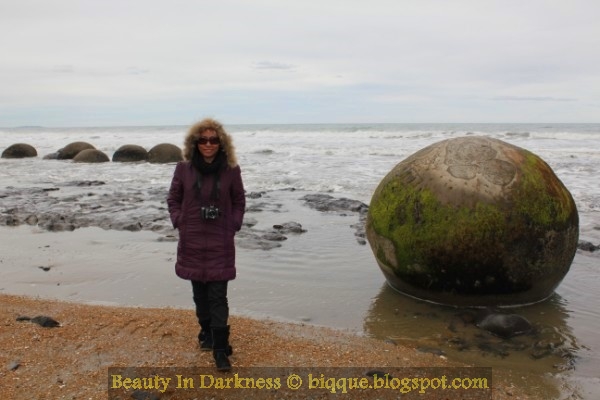 I was so amazed with the stone…examining them one by one. Hubby told me that these stone were made by aliens. Pfftt! More Asians at this attraction, posing here and there like no one business. Well, we were among them. Haha! 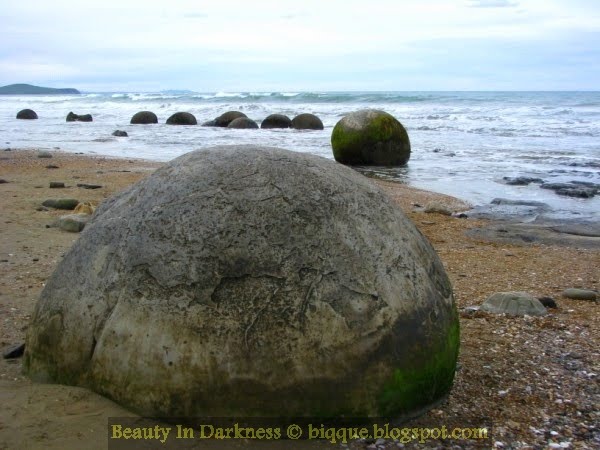 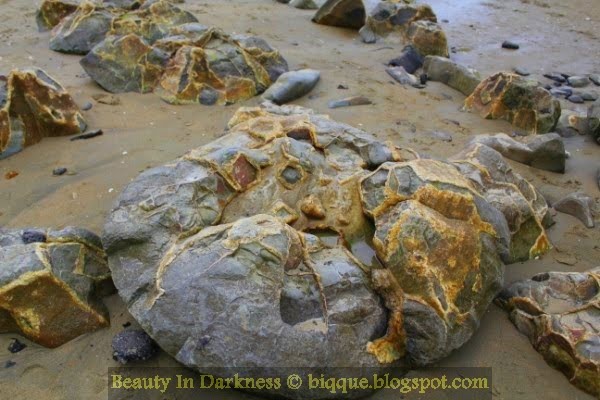 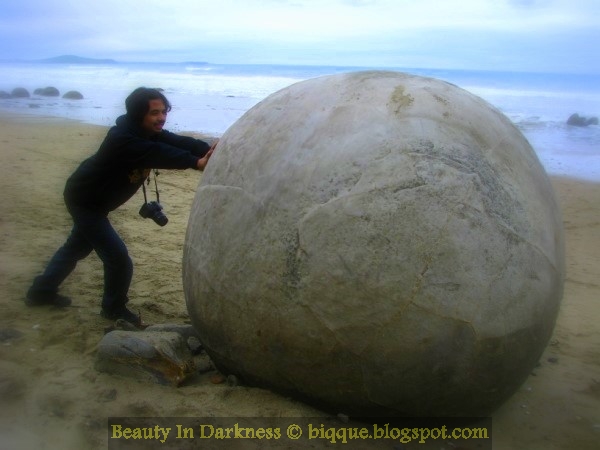 We stopped again at one of the rest area (another good thing that the government have prepared) and snapped with seagull. I presumed. “Jap…jap…I move realllllllly slow towards them…” Rupanya, diorang tak lari punnnnn! 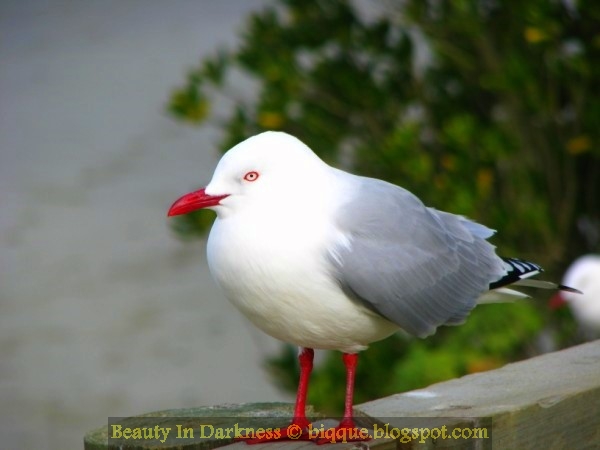 Before we reached Dunedin, we stopped for fish and chips at one of the restaurant. We opted for blue cod instead of salmon, since it was cheaper. Tapi sedapnyer masyaAllahhhhh! Agaknyer sebab lapar sangat kot… 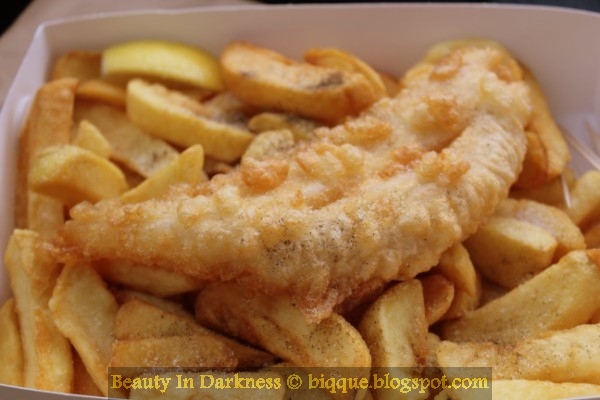 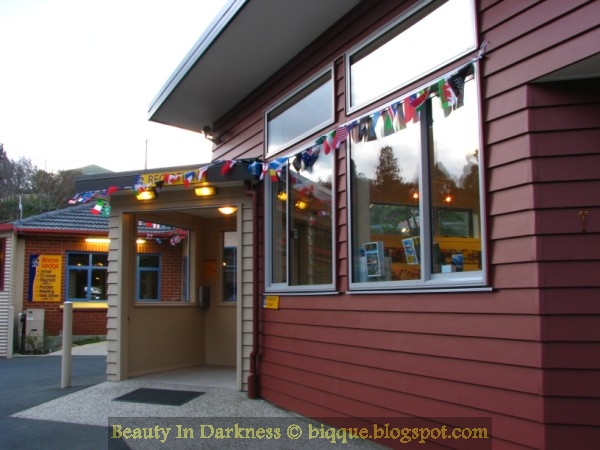 “By the way…is there any chance for me to check whether my friend have already checked-in?”

We drove to the cabin and found that the cabin was super cute and simple. We took off those unnecessary things and sedar tak sedar, tertidur.

They upgraded to a similar cabin next door, since tak tahan tido dalam keta, sejuk gedi. We lepak and chat about how we all arrived while enjoying Kiwi Whittakers and drinking L&P, the world famous in NZ. 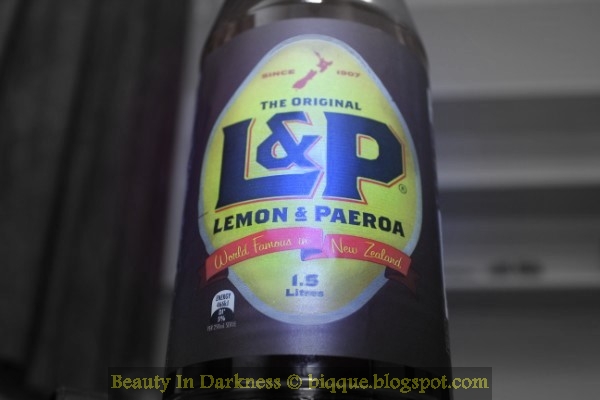 Can’t wait for tomorrow’s challenge! The Sekupang Team is back!

P/S : Read my companion's blog on the same entry, here and here.