Wow! We survived! So, another hazy day in Beijing to be wasted.

Looking at our Tour Cookbook, the first place to visit was Summer Palace. The palace was a bit outskirt, so we brought some food along (serunding la, what else!)

We walked to the subway station and saw 3 tuk-tuk look-alike, nearby. Wah, they looked different this time! It’s smaller, thinner, as if you were sitting inside a food display rack. We took train (where else) at the usual station, Dengshikou, at Line 5, but this time, we stopped a bit further up, at Yonghegong interchange, where Lama Temple is located. We initially put this temple in our itinerary, but we skipped it, for we had seen too many Buddist temples before, and they were almost the same. 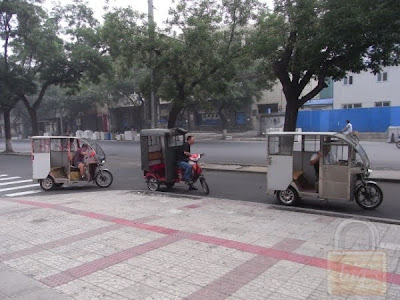 We changed to Line 2 and we were quite happy since this Line wasn’t as packed as other Lines due to its design (it was designed in one circle, so you can sit in the train and come back at the same place in few minutes.) We stopped at Xizhimen interchange to get to Line 4, and stop at Xiyuan. Guess what, for the first time, we got to sit down on the train seats! Hahaha! 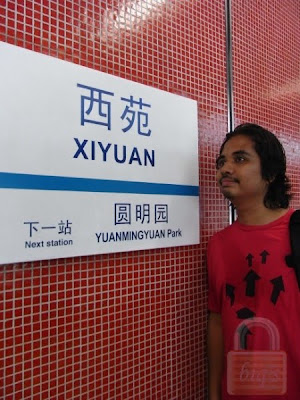 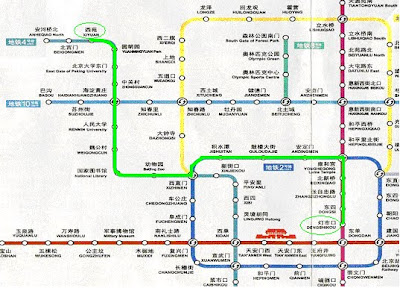 Once we got out from the station, we saw few trishaws and tuk-tuk, offering tourist to the Summer Palace. Without looking at them, without knowing the direction, we straight away turned to the left. Lucky we were in right direction as more and more tourist were spotted along the way, plus, it wasn't far like other places that we've gone to. 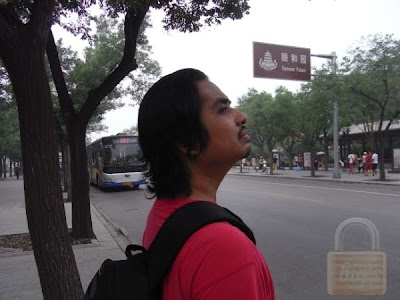 About 1km (ceh, 1km is not 'far' anymore), we reached the main gate of the Summer Palace. We saw many people took pictures in front of the stone mark, and so did we. We had to walk another 100 meters, passing the bus parking area and few local shops, before reaching the ticket office. Entrance fee was RMB35 and if you wish to visit other scenic places that can be found in the palace, extra fee is needed. 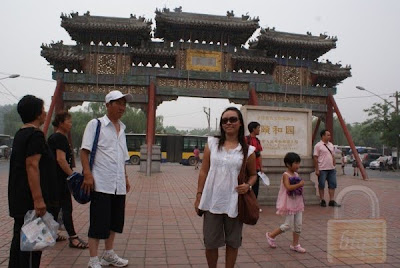 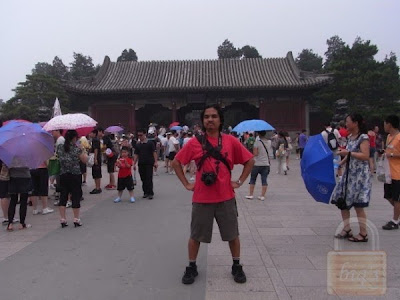 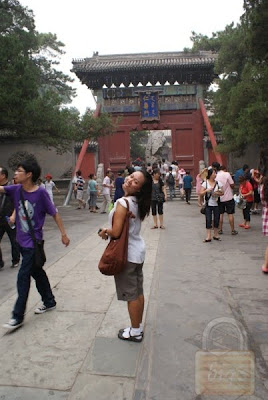 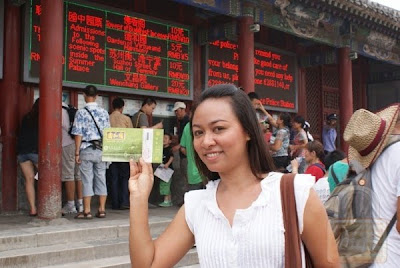 Since we only wanted to see the lake and the Fragrance Tower from far, we just purchased the entrance ticket. There were two gates, East and North, where you can come in and get out in different ways. But please take note that these gates are opposite to each other and this place is the BIGGEST royal park, as big as 15km. So do your own marathon, triathlon, whatever thon you want la ye! Hehe!

Once we entered the yard, we were welcomed by one large stone and the mystical creature figurine. A plate to declare as the Patrimoine Mondial by UNESCO, also being displayed on the left side of the hall. Looking at the map area, made us wonder, again, did emperor really walk and visit every inch of this place? In front of the Longevity hall that kept emperor’s couch, we saw statues of peacock and dragon at both sides. The big heavy steel bucket that we saw at the Forbidden City was also there. (Okay, they were having the same method to put off the fire la, hehe!) 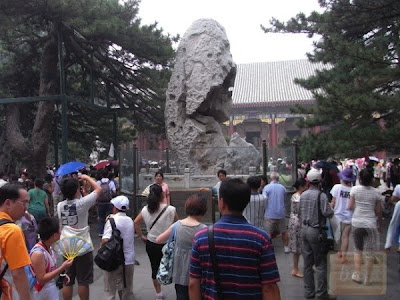 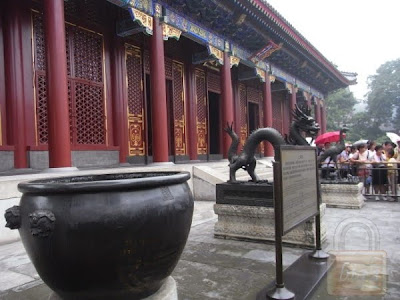 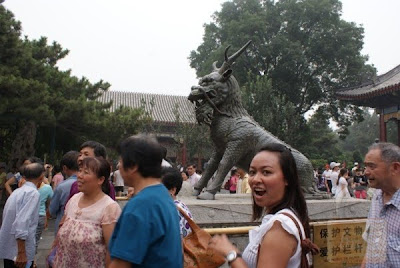 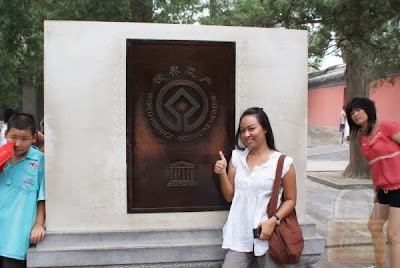 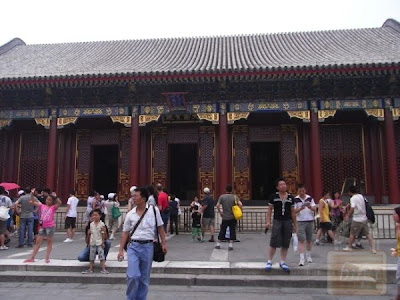 “Ok, we go to Kunming Lake, from there we can see those that we wanted to see.” 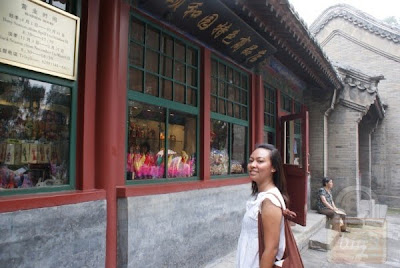 We went to the left side of the Longevity Hall and saw the lake. 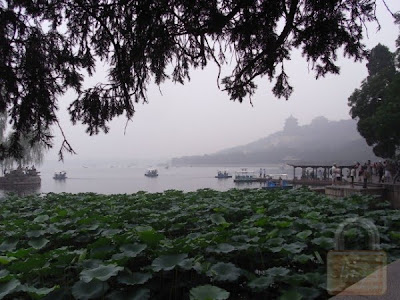 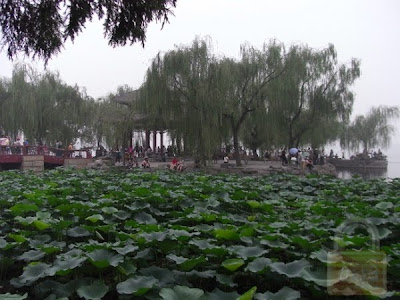 Yiheyuan, also known as Summer Palace was popular of its huge and appealing Kunming Lake. The lake occupied almost three quarter of the area and this palace was designed perfectly with finest carving alongside beautiful water lilies in the lake, especially for Empress Dowager Cixi, the most powerful empress in Qing Dynasty.

From afar, we spotted the Tower of Buddhist Incense, the most popular landmark in Summer Palace. Haze again, has limited our view of the tower, which located on the other side of the lake.

We then saw one unique and antique traditional pavilion on one small man-made cape. To go to this pavilion, we had to cross over the lake via a bridge. Parallel with this bridge, there was watchtower as thick as the Forbidden City wall. 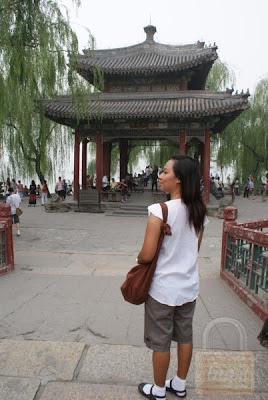 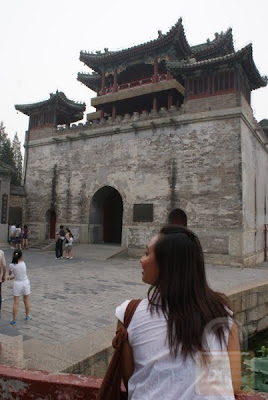 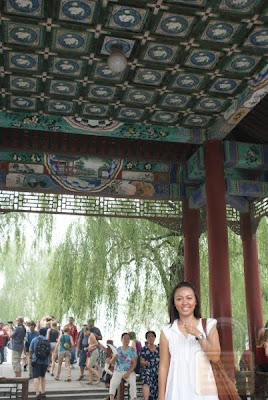 While crossing over the bridge, hubby shouted,

“Haaaaaaaa tu la Seventeen-Arch Bridge!!!” I wondered how he can see that bridge in this type of weather. 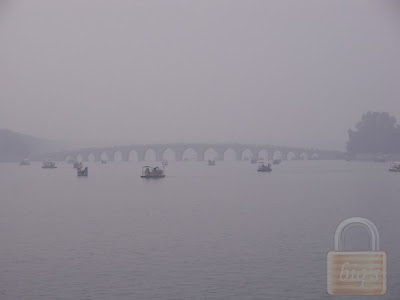 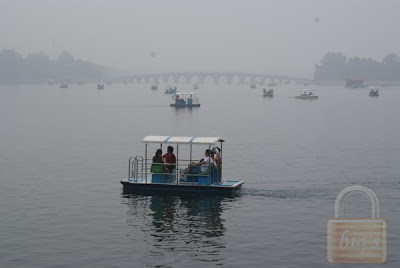 But seriously, the bridge was super amazing and marvelous. I can imagine how big the bridge is. Before the bridge, tourists were sightseeing in rented boats and paddle-boats. If you have time to do so, please do so. But too much of walking, we didn’t bother to do paddling anymore.

From the pavilion, we able to see the tower, clearer than before. Small fishes swam near the banks, tourists endlessly snapped pictures here and there, and suddenly we saw a group of Indians, wore jersey, cowboy hat and such. The moment we saw them, we already knew that they are Malaysians! Hahaha! Where got Indian from India wearing cowboy hat oneeeee…!

True enough, they are Malaysia, when another group of Chinese asking them to walk faster, in Malay…“Cepat laaaaa…” coz they had taken too much of their own sweet time to snap picture of the lake with Sivaji The Boss pose, and forgot their tour guide and tour members. Hahaha!

We both had our own sweet time too, where we posed in different modes. 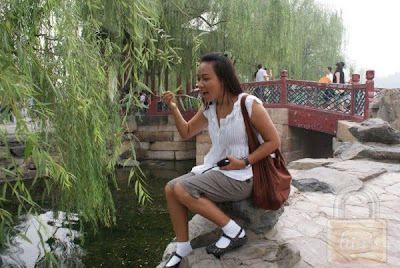 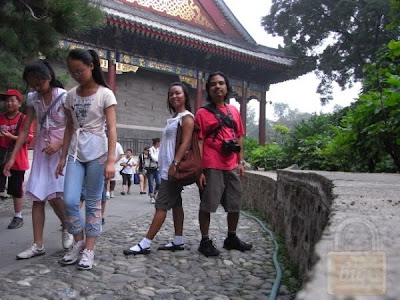 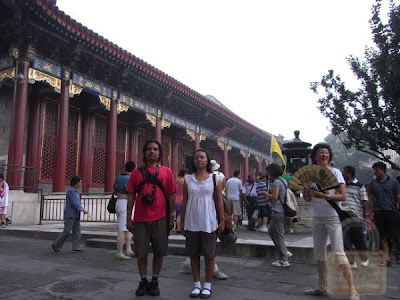 About two hours spending our precious, funny, and memorable time in this palace, we walked out. On the way to the subway station, we passed by one small shop that selling one unique snack. The man in white t-shirt and fuchsia apron poured a thin yellow liquid batter onto a black flat circular hot plate. He then spread evenly the mixture using one offset wooden spatula and once dried, he put all the fillings on top of it, and finally folded it into one nice crepe. 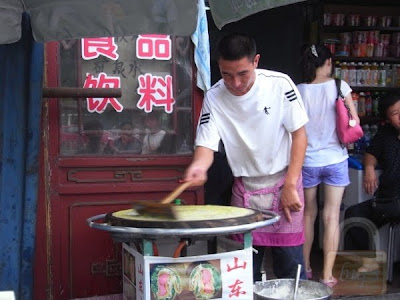 And so we chilled, walking back to the subway. 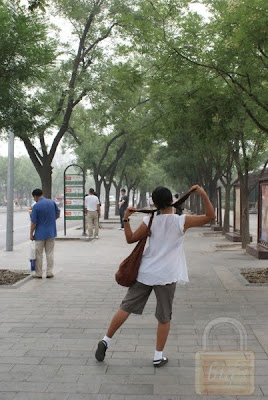 Unbuttoned by Biqque at 2:57 PM

your last pic so cute for an ending !!

ronnie, hahaha we were so bored, so i acted like one happy kid!