The Egg (NCPA) And Silk Market : The Alien

We got up and cleaned ourselves after found ourselves in horrible smell. Yucks! We can’t even stand to get close to each other. Haha!

“Nak gi mana?” I asked while massaging my both legs. 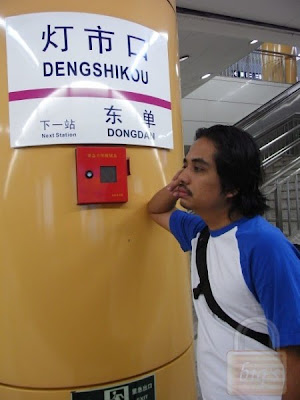 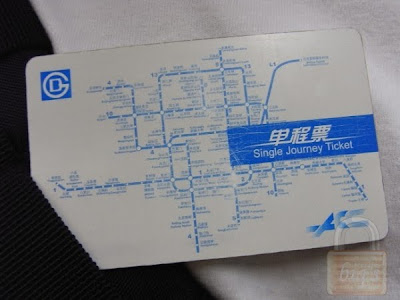 Again, we went out and took subway from Dengshikou Line 5 and interchange at Dongdan, to proceed to Tian’anmen West Line 1. The good thing about this stop is, it will straight away direct you to The Egg, where a couple of tourist policemen waited at the entrance, welcoming you to the convention hall. 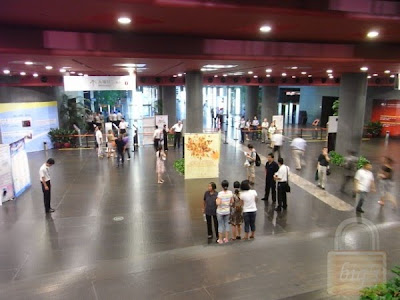 The hall looked just the same as KLConvention Center. This so-called Opera House of Beijing is built for the purpose of National Center of the Performing Arts, consists of three halls, Opera Hall, Music Hall, and Theater Hall, that can occupied 5000 plus people at one time. Wow!

This futuristic design totally a modern architecture and exclude any ancient value. It has underwater hallway, where you can walk beneath an artificial lake, under the clear see-through glass on top of your head. We didn’t take the chance to walk through the underwater corridors since there were no sharks, stingrays, dolphins, or whales like what we can see in Aquaria (hahahaha), but anyone who interested to try this new experience, you can pay RMB30 at the ticket office. 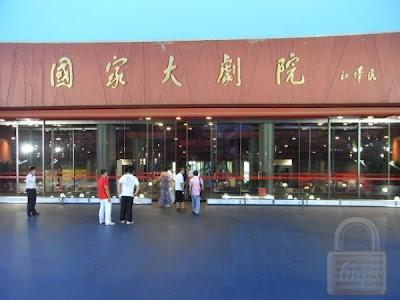 We walked up the stairs and found our way out, to view the exterior of The Egg. There was a sliding door that was guarded by one young officer. The wind blew quite strong but the haze still around. Sheesh! 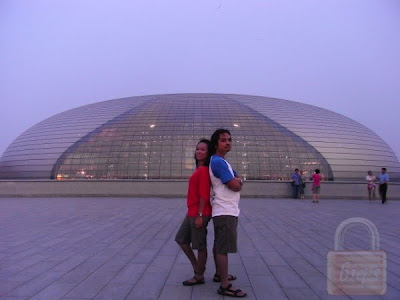 It was 7.40pm and no lights lit up around the yard. We tried to capture few shots but without tripod, pictures turned to be quite shaky. We walked to the right to get to the front of it. Not many people or locals this time. Fuhhh!

We setup the tripod and took some pictures. The Egg was seriously BIG and CUTE! Without wide screen camera, you can NEVER capture the whole Egg, trust me. Lucky out of three cameras that we brought, two of them have wide screen. But since hubby only brought his camera that night, it leaved us with only one wide screen, that the quality wasn’t good as DSLR. Haha! (Yeah, my Ricoh, what else…)

“Apa? Tak penah tengok Melayu?” hubby suddenly shouted from behind. I was in the middle of setting up the tripod, and I looked at him. Then I saw one local guy walked and looked at us while passing by.

I don’t know why, in China, they really look us up and down, front to back, like they had never seen any Malay before. (PROVIDED, they know what Malay is lah.) Regardless at subway, tourist center, roadside, or shopping complex, they CAN’T take their eyes off us. Now I know, why China Embassy call tourist as ALIEN in their Visa application. They never had seen other people outside of their country kot! They don’t know other colors except yellow. No wonder la locals had mistaken us as alien also! Haha! (Wherever we go, we always mistaken as local, but in China, ah-ah, we were not!) 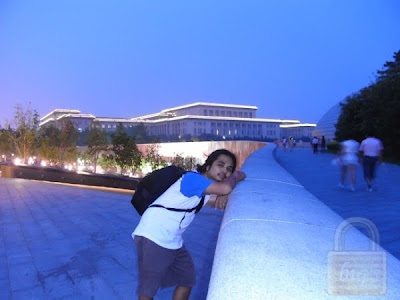 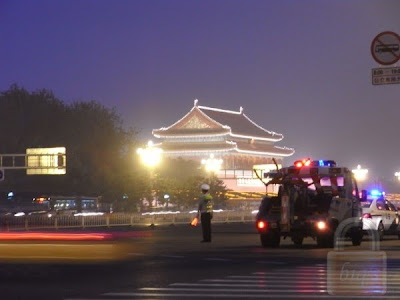 We moved a bit to the left when we saw lights were lit up around the Hall of People, which located next to The Egg. We snapped few pictures and suddenly, a girl came to hubby and showed sign language like asking for hubby’s help to take her picture, together with her mother and sister. Hubby didn’t get it, and the girl just walked away. Hubby told me that he couldn’t understand whether the girl wanted him to take her picture or the girl wanted to help us, to take our couple picture. I then, went to them and asked,

“Do you want us to take your picture?”

“Err…no, no…sankyu…” they hold each other like I was going to snatch their bags!

Can you imagine? I was trying to be nice and figure out what she actually wanted, but then I was treated like an ALIEN! Now, I am officially an ALIEN la in China. Hahaha!

We walked away and laughed out loud, and we didn’t even care to behave.

We walked down the stairs from where we came and the officer who waited at the sliding door still there.

“Sudahhhhhhhh! Takkan nak jadi macam kat Stadium hari tu!!!” (Remember, we ran to the subway, but then it was closed, and we had to walk 400 meters to find a cab?)

“Then where is the subway?” I asked him. Unfortunately, Chinese didn’t know alien’s language. He just acted like he didn’t get what I said.

Knowing it such a waste talking to the officer, we tried to ask few locals around the yard. Lucky one of them showed us the other entrance of the subway that led to the same subway that we came just now.

Since we were going to Silk Market, we stopped at Yong An Li station, the same Line 1, four stations away from Tian’anmen West. The subway station has again, eased you, where the mall was connected with the subway exit. You will find yourself walking towards the mall, once you see souvenirs stalls along the basement, towards the ground floor.

I quickly spotted a board of magnets leaned on the wall. The price was RMB200.

Ok, I wasn’t surprised at all since I already knew that they will put higher, to be exact, ridiculous price. Thanks to TripAdvisor and Google.

We walked up the stairs and as expected,

“How much you want? How much?” Your price. How much?” the girl asked me to press the number on calculator.

She kept on asking and pushing me to give my price.

She had her jaw dropped. Hahaha!

The first floor that we went was full of bags. So, it was clearly bag department. (Yeah, they have categorized the mall with separate-departmental floors, start with bags, shoes, silks, luxury watches, arts and handicrafts, and many more.) Seven floors, in total. Nexxxxxtttttt. We passed the bag, shoes, and silk levels, and headed straight to the art and handicrafts. Our mission was, to get ourselves and friends back in Malaysia, China fridge magnets. 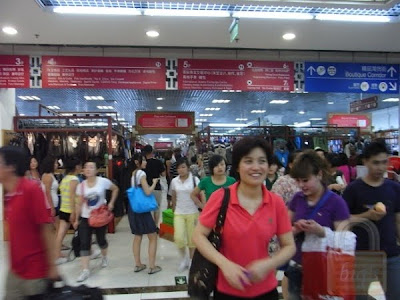 Almost all shops having the same design of magnets. Olympic Stadiums, Forbidden City, Temple of Heaven, Great Wall, you name it, they have it, regardless stone, plastic, or steel. I had a window shopping first since we planned to come back the next day. I couldn’t find any baseball caps and t-shirts that stated Beijing or China. What they have only fake Gucci, Lacoste, LV, Aigner, Coach, and many more boutique brands. Hahaha!

At this mall, you will find all salesgirls wear red silk vest and speak alien language. Kahkahkah! Yeah, they speak English and some girls speak Malay, Arabian, French, Italian, Russian, Zimbabwe, Uganda (haha kidding…I was too happy to know that they can speak English).

Owh, the price of merchandise in this mall? RIDICULOUS and UNREASONABLE! NEVER EVER take whatever price they give to you. ALWAYS starts with 10% of the price given. Not RMB90 from RMB100 ya, it should be RMB10 from RMB100. Then add RMB5 at a time. (Get ready to be tortured by them, so drive them crazy with your price la. Hahaha!)

“Tu la, tumit I sakit gile…” We still remember how tired we were at Forbidden City this morning. Go to hell with window shopping, we went back to the subway entrance. 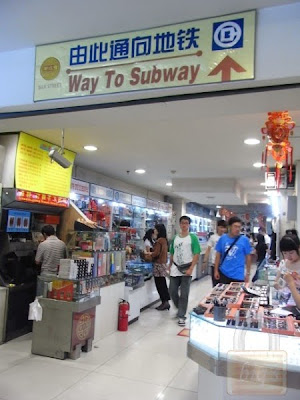 We finally reached the walkway where the first girl tried to rip off us with her fridge magnet and we saw her closing her shop. It was 9.00pm. AND AGAIN, the subway entrance was closed!!! HOI!!! Why must subway entrance close early nihhhhh?!!!

They said there is another entrance, but you have to get out from the mall. “Where?” I asked the girl, and she pointed us with her finger, the direction to the mall exit.

We quickly walked out from the mall, along with other tourist who dragged their newly bought Samsonite, LV luggage. We stopped in front of the mall and had a rest, before the flag poles. Locals and tourist were everywhere. With neon lights, colorful building lights, buses and cars, we knew that we were somehow, in the city. I looked up at the mall and saw “Silk Market-The Most Visited Market by Foreign Shoppers” flashing on the mall board. Wahhhhhh! No wonder la! 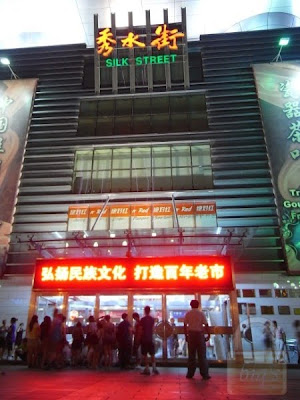 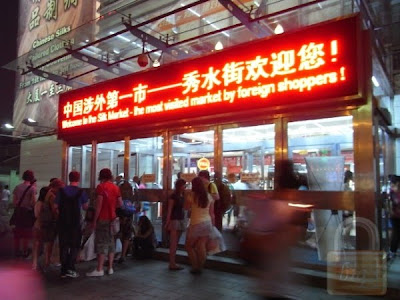 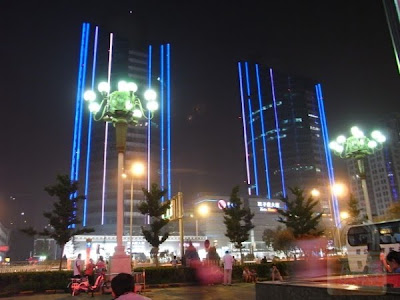 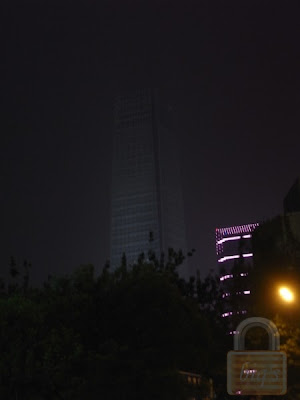 We walked behind the mall and saw the subway entrance. It was Yong Ah Li, the one where we earlier came from. Easy, we took back Line 1 and stopped at Dongdan for interchange, and take Line 5 to stop at Dengshikou, where we had another 10 minutes walked back to the hotel. 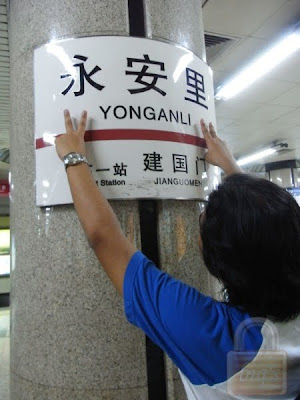 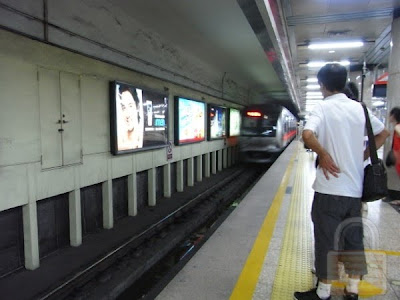 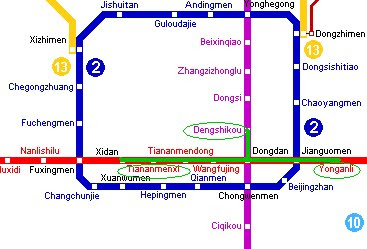 Beforehand, this is what you can see at all subway stations…automatic public toilets WITH doors. (No need to cover your ass with magazine huh?) Owh ya, no water. Please bring your own wet tissue or a bottle of water, okies? (Don't ask me, I NEVER PEE or POOP outside my hotel room :D) 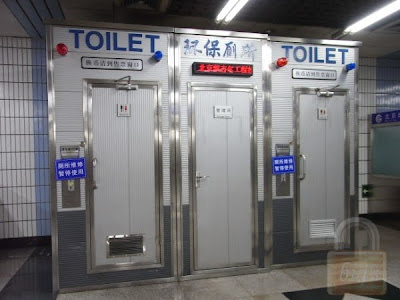 Unbuttoned by Biqque at 6:10 PM