Our journey then continued to one of the seven wonders, THE Great Wall of China. Cruising on a winding road along the mountains, God has given us the opportunity to enjoy His creations, the scenic villages, river, and trees. Although we were somehow disappointed with the hot summer weather of almost 36 degrees, and haze that have restricted our sight, we learn to adjust to the weather, and appreciate those nice and wonderful landscapes, approaching one of the Great Wall sections, Mutianyu.

"Sampai dah...tak sabarnyerrrr!" We walked towards the ticket office, where lots of street hawkers selling souvenirs at both side of the main road.

Since the tour did not include the cable car fees, the guide has advised us to choose the mode of getting to the top of the Great Wall. We had given few options:
1)climb up and down on foot
2)climb up on foot and take cable car down
3)return cable car ride
4)and the coolest and attention-grabbing way is to take cable car up and use toboggan slide down.

Without any hesitation, we chose to go with windowless-cable car ride and toboggan slide down. The rest of tour members followed us (yup, they didn't even know there was a toboggan slide there...d'uhhhh...that is why you need to fully equip with info on which place you are going to...), while the Spanish girls chose to climb. 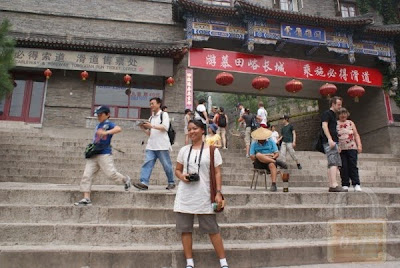 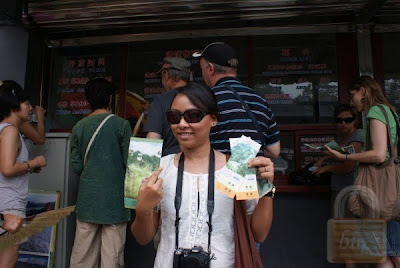 "Camne nih?" I questioned on how to hop on the MOVING cable car.

"Stand there." The staff pointed to the marking board where we are needed to stand on, faced him, and quickly sit down once the cable car swiped us off from the back! Then he quickly lowered down the bar.

"Hahahahaha! Gile!" We was so happy and teruja! 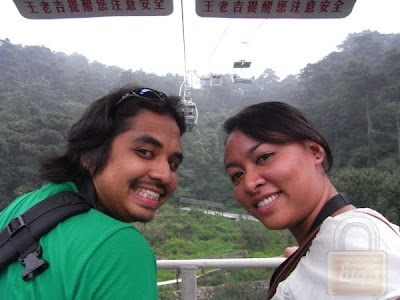 Getting up via cable car was a total fun, as our feet were hanging, dangling over the mountainside. From afar, we hardly saw the Great Wall, as the surroundings still hazy. Looking below, few visitors were screaming out loud, enjoying the toboggan thrills. 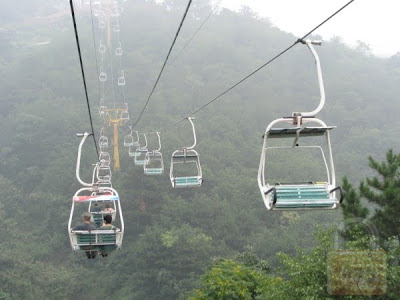 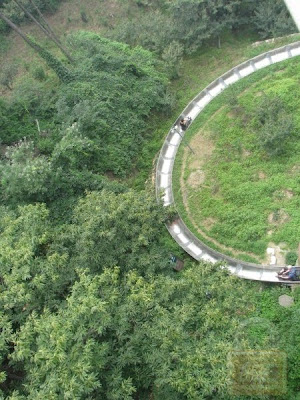 “There! There!” I pointed to one of the towers, one of the best-preserved parts of the Great Wall. Can’t wait to reach there!

We hopped off the moving cable car (yes, you have to jump on and off quickly as it never stops moving) and climbed up and down onto the man-made steps, just to reach the first tower. I swear, we were too excited my heart pumped rapidly! The first thing that we saw was an information board showing the Mutianyu Route Map. 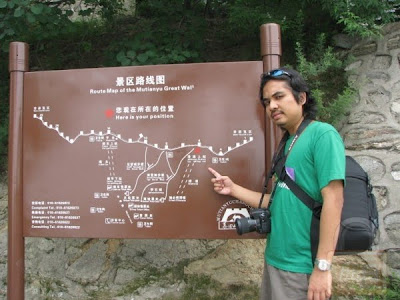 We then had to climb few steps to reach the first tower. (Owh god, that's not few...that's many!) I was so tired and dehydrated, but being so determined to reach the tower, have made me a crazy woman. 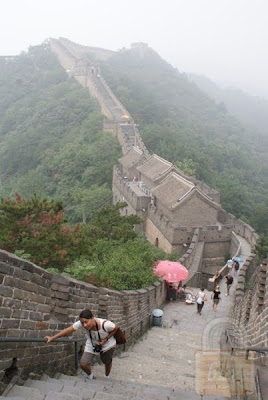 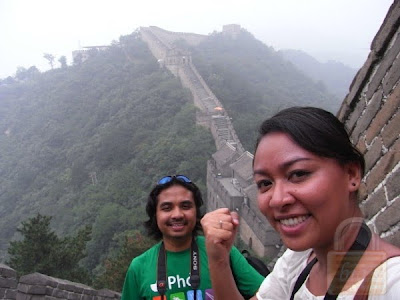 The view from inside of the tower was so marvelous and amazing. We didn’t waste any time, snapped pictures here and there, back and forth, left and right, in and out, up and down, pointed at every inch of the wall. We have conquered 3 watchtowers (out of 22) and we had no more energy to put out on the rest. At least, we’ve been there, we’ve done that, and we’ve made it! 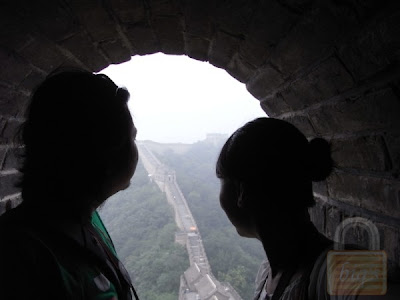 The wall is long and massive! The panorama was beautiful! I had a question that kept on lingering on my mind, how they built THIS. How they had transported thousands blocks of heavy stones to this height, in the middle of nowhere, over the mountains? It’s like an out of this world constructions had taken place long time ago. 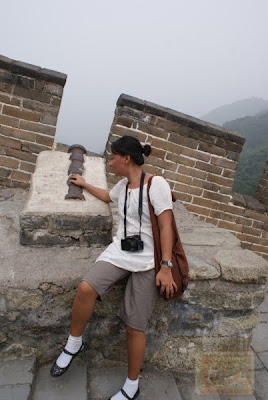 Watching other visitors climbing the wall was another wonderful experience. Since the steps are really steep, I was hoping that everyone was safe and strong, to avoid any bad incidents. Hubby decided to walk further up to the next and last tower of Mutianyu. But I've surrendered! He went up and took my picture, while I did the same to him. 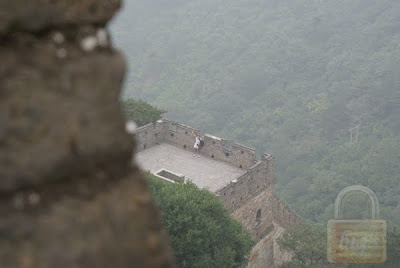 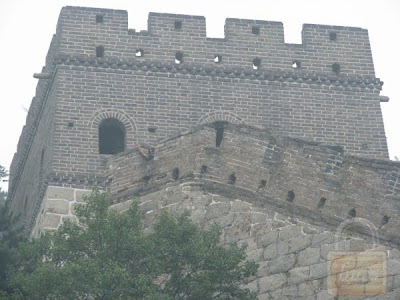 About one and a half hours, we started to walk down, back to the first tower, to catch the toboggan slide. The time given to us was actually too little. Two hours from the ticket office, going up via cable car, coming down via toboggan slide, plus shopping, was just too short. 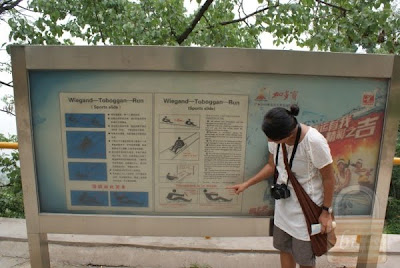 We queued for a while to ride the toboggan. I hopped onto one single-brake-wheeled-car, followed by hubby at the back. The staff gave a super brief description on how to use it.

That’s it? Ok, simple. We started slow to get familiar with that machine, but then we realized that this beast was actually easy to handle. So, we slid faster! 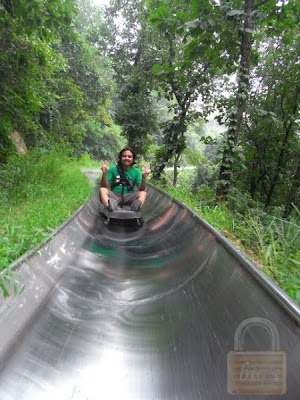 “Weeeeeeeeeeeeeeeee.” The more you bend over, the faster it will go. And don't worry, you'll see 3-4 staffs on the way down, who will shout at you to keep going if you stop. Haha! 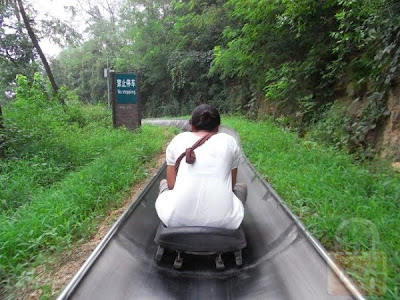 We slid down, left and right from the wall on a winding metal track. Occasionally, we had to stop when a group of family in front us, stopped to take pictures, ON the toboggan. So unprofessional, because we did SLIDE and SNAP! Haha!

Ten minutes later, we reached down, just behind the ticket office. A couple of old guys in Chinese opera costumes, complete with ancient armors, waited and offered visitors for a snap of photo. Some did, but we didn’t. We walked straight to the street hawkers to get some souvenirs for friends and family back home. Having to know the bargain tricks, I managed to get two Beijing baseball cap from RMB50 to RMB8 (each), and three Beijing t-shirt from RMB350 to RMB20 (each). Bravo! 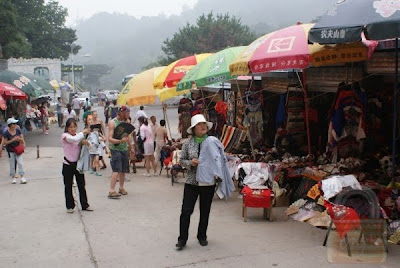 “How much did u buy that t-shirt?”

“WHAT??? THAT IS NOT CHEAP!!!” I, one American girl, and an Australian-born married with Hongkie, shouted to him. His girlfriend smiled and said “…the aunty must have been called you a stupid…hehe…” and that guy’s face started to change.

“How much did you get?” He asked us. “I got it for RMB20” I answered. “I got it for RMB15” the American girl said. (Dang…how can she get cheaper than me? I’m the BARGAIN queen lah!!! Shame! Shame!) And he remained silent, dissatisfied, and embarrassed.

We've waited almost half and hour coz the Spanish girls and a couple haven't came back. Once all tour members came back, gathered, safe and sound, the bus started the journey, headed back to Beijing. Everyone was sleeping, except for me, who still admiring the Great Wall, one of the great seven wonders that still survives, and hoping to come back and check out, how the wall look like during winter, covered by beautiful white snow! (Nak ke datang lagi?) 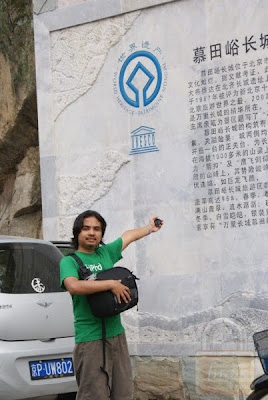 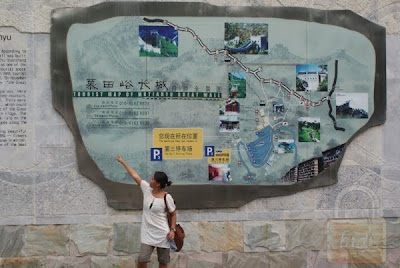 really awesome place! hope to visit it one day =)

ken, u should...go to mutianyu section, the best amongst all...

I was there 10 years ago. Boy, how time flies. There was no cable car where we went. The bus parked almost at the foot of the Great Wall! Yes, what a climb! We took some good shots too but yours are nicer! Wanna go again?

lion girl, i have to think twice whether i'm going again or not...hahaha! (owh, the picture will be nicer if i have dslr...sigh)

Awesome gila slides tu. I imagined it as something like those slides in sunway lagoon. Like super steep ans scary Hahaha.

gillion, i wanted too but it was too hard for me to find a halal one :) i really wanted to taste the roasted duck...nyum2...

Great photos, thanks for sharing. Mutianyu Great Wall is a good alternative for Badaling, often quiet, with less tour buses and stops. Badaling gets more tourists than Mutianyu. If I could visit only one, and want to enjoy a better views with less crowds, Mutianyu is right for me. http://www.wildgreatwall.com/mutianyu-toboggan-ride/