We woke up early and started to plan for today’s visit. Before that we took our breakfast at the hotel café.

We couldn’t imagined how these foreigners eating nasi goreng every morning…Japanese takpe lagi, mat saleh ni ha. (It’s true that they still served bread with butter and strawberry jam, bread with egg filling, hot drinks and orange juice, BUTTTTT it was the same thing, everyday, till bekas stainless steel punya arrangement pun camtuuuuu gak susunannye!) I requested hubby to take picture of me at the swimming pool but hubby said when we mandi-mandi later, baru tangkap. Then we packed our things and started our day due north to Kintamani. In order to reach Kintamani (about one hour plus, tengok which route you take la), we have to pass by several interesting spots like Sukawati - market that sold fresh farm products, souvenirs, crafts, etc, Celuk - popular with silverware, and of course the popular Ubud - famous with wooden handicrafts, decorative lamps, paintings, you name it (and they were wayyyyyyy much cheaper than what you see in town). In Ubud you may find lots and lots of interesting and marvelous crafts along the way. This was where you can apply the quote ‘shop till you drop!’ Anyhow, I didn’t buy anything here because I can’t imagine how I can bring back all those stuff! Semua besar-besar and cantik-cantik! (buat meniaga sedap ni!)

So we continued our journey and stopped at one unknown place before Kintamani (I think Batur kot) and the place was so darn beautiful and breezy! Padi huma (mountain paddy field) around that area, kat lereng-lereng bukit cantik gila! So green and refreshing! We walked down the road side and we saw few stalls selling souvenirs (serious, Indonesia ni penuh dengan tempat jual souvenirs, so if you missed anything, you can still buy ole-ole along the way). Looking down the slope, we saw few huts full of Japanese, sitting and drinking macam kat Hokkaido! Haha! Macam they so used to this place tau. Snapped few pictures, off we go.

We arrived in Kintamani an hour later and it started to rain, but tak heavy la. Few tour police officers controlled the traffic as few cars seem to be lost. Haha! No signboard at all saying that we were in Kintamani.

“Kintamani-nya disini ya pak?” we asked.

“Iyaaaa…” we paid the conservation fee, parking ticket and drove by.

We stopped at a parking lot where almost all cars and buses stopped there. It was surrounded by white fence and you can witness a volcano mountain in front of you covered by thick mist. That is Mount Batur. It was so nice and chilly. We had to cover ourselves with shawl because it was so cold! We’ve been told by the hotel staff to have lunch here because we can experience the beautiful Lake Batur opposite the two-storey restaurant, but thinking of the halal-ity of the food, we decided not to. We didn’t stay long and walked to the car. Few street sellers persuaded us to buy Bali printed kaos (t-shirts) but again, we passed (even though it was darn cheap! Bodoh plak tak beli…). So we headed to Besakih, the mother of all Hindu temples.

We drove down the mountain into a winding, mountaineous road, headed into a deep jungle. We stopped twice to ask locals which exactly were the way to Besakih. On our left and right sides, pokok, pokok, pokok. Dah la hujan renyai-renyai, gelap plak tu! Out of no where, suddenly there was a lady in beige kebaya waving us to stop!!! On her hand, we saw she hold a bag full of offerings. We refused to stop but we had too when she suddenly stood at the middle of the road!!! Ya Allah!!! (Siut tul! Dah la takde kereta langsung masa tu!) I opened the window a bit and she started to mutter some spell and asked,

“Ke Besakih…ngapa ya?” I asked back.

She later put some spelled rice (usually used during worshipping the god) onto our foreheads and an offering on each side of the wipers, plus, another one on the dashboard! (We already had one and it was there since day one because we afraid to throw it away, and now, she added up another one! Bila nak buang kalo camni!).

Ooooooooooo! THAT WAS WHAT SHE ACTUALLY WANTTTTT…money…so I looked at hubby and he asked me to give her few Rupiah. I took out Rp1000 and handed to her…(36 sen duit Malaysia, hehe!) We left her there and headed to Besakih.

The road? Gosh! Kecik and memeningkan and we didn’t see any pariwisata buses (tour buses) at all. But we managed to reach there (kira hebat la kan…tau jalan lain). Again, there were street stalls selling souvenirs. Few happy steps to the temple, we were stopped by the temple guards, asked hubby to cover his legs (hubby wore short khakis) and they offered hubby to rent a piece of sarong (nak buat duit sebenarnya ni). Though I’m wearing 3-quarter pants, I had to cover my upper body with shawl that I used to cover my head. Susah sangat, we cancelled to visit the Pura (temple) and disappointedly walked back to our car. We didn’t even get to photograph the best shot of the temple since it is too far away.

Driving back to town, along the way, we saw Hindus worshipped their god. Regardless small or big Puras (temples), they will ‘pray’ (batu, pokok tepi jalan semua diorang sembah). It seems like they did it 24/7 (no wonder Bali was called the sacred place for Hindus). We took the road where we came that morning and enjoyed Sanur beach along the way. Approaching Kuta, we saw few duty free complexes, Planet Hollywood and Harley Davidson. Statues were everywhere in Bali.

We quickly decided to watch Kecak dance at Uluwatu (yada yada yada, another temple…). We headed to Uluwatu (Pura Luhur) and reached there before sunset, as Kecak dance is performed everyday at 6.00pm. With a beautiful temple over the edge of cliff, we were stunned. The sea, the temple, the cliff, the cloud…amazingly beautiful. We were equipped with purple sarong and yellow sash to wear to the play. With Rp50,000 each (the most expensive entertainment fee in the trip), we entered the open-air-circular-stage. Playful and bad monkeys were all over the temple ground, waited to snatch anything from you! They were called ‘bajingan lompat’ (thief that jumps) by the locals. In fact, we experienced a situation where we saw a monkey snatched few thousands of Rupiah from a girl’s bag! Don’t have to mention about shades and hats, these were among the most top snatched things here. You have to lure them with foods to get your things back, if you were lucky.

We sat next to mat saleh and minah jepun, in fact, we were the only Malays there. They started the play with more or less 30 topless guys who wore chess-board-printed-sarong and black pants, with a red flower at their ears, and sat around a fire. They didn’t say anything except making sound of ‘cak/kecak’ continuously, from start till finish! Simultaneously with the sounds of ‘cak/kecak’ made by these guys, the main actors and actress played their roles. In summary, a wife has been kidnapped from her husband by a bad guy, where later a monkey called Hanuman came to save the wife and brought her back to the husband. So, this Hanuman was a true hero and being admired by everyone lah. Even during the play, audience will clap whenever he comes out to the play. Pendek cerita, memang play ni best sangat because it combined the elements of history, drama, and comedy. Especially when 3 bad guys (wore mask and had fake big buts) kacau-kacau audience. Kelakar sangat! (Hubby took a short video of the performance, hopefully he can upload it later). While watching the show, we also enjoyed the sunset. It was beautiful this time, we able to snap it without clouds blocking it…hehe!

After one hour, it was already dark. Audience started to walk out from the area and we headed to our car. Babi guling still the main menu here, so we decided to have our dinner in town. Back in hotel, we freshen up and looked for internet café along Legian Street. Hubby insisted to have a quick view on his email, praying that his office didn’t send him any mail regarding office work. (My god! Dah cuti tu cuti la! Such a workaholic tau dia ni!) Satisfied with no pending assignment, we walked further up the Legian Road sambil window shopping. Then we decided to use a shortcut to go to Kuta beach. Full of street stalls selling souvenirs and locals offering motorcycles and scooters for rent, we walked thru the dark one-way-lane that you can only see horse carts taking tourists around town or back to their hotels. We later exhausted and noticed that this shortcut was actually quite far! And scary! We excitedly reached Kuta beach but,


We walked by the seaside and found the popular Bali Hard Rock Café. Youngsters (locals, mostly Jakarta people) lepak depan HRC, waiting for entry. We snapped few pictures and then, started to think what we would have for dinner. We went into McD, passed. Restaurants, passed. Huh! Burger! We saw one 100% Muslim burger stall and ordered burger and hotdog. Sedap! We ate there and bought mineral water at a mini mart. Then we walked back to our hotel and the reception called us to inform about the free romantic dinner sponsored by Matahari Bungalow. Yeay! We scheduled the dinner on the next day at 7.00pm. 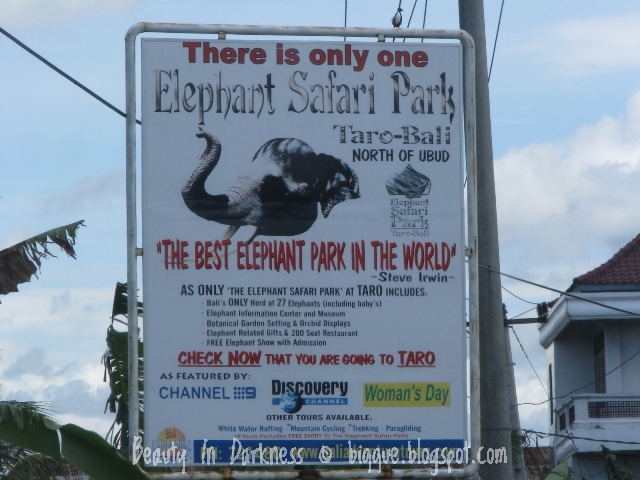 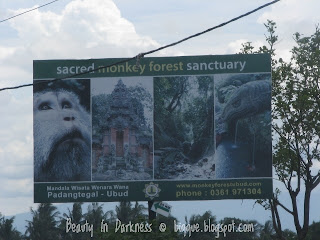 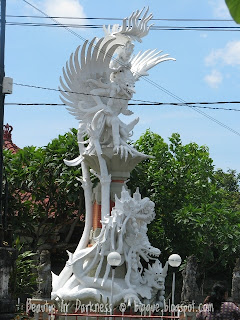 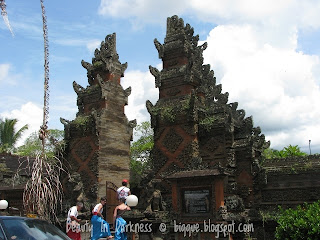 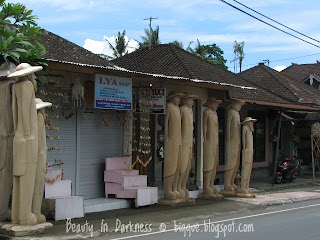 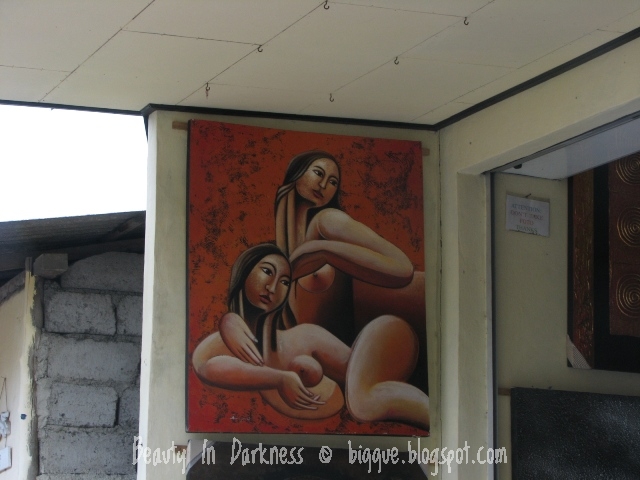 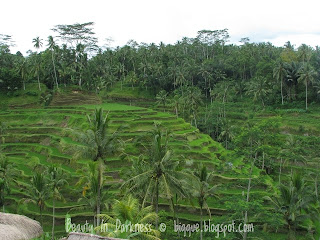 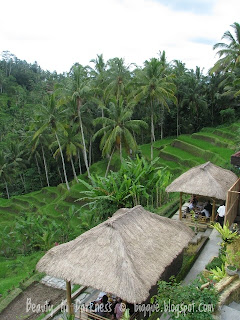 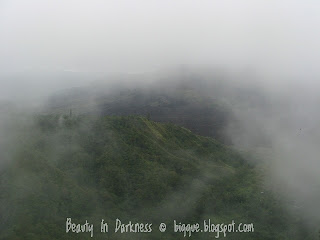 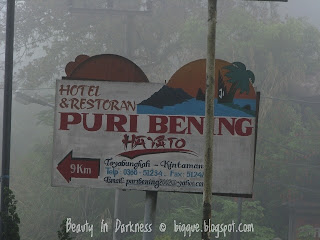 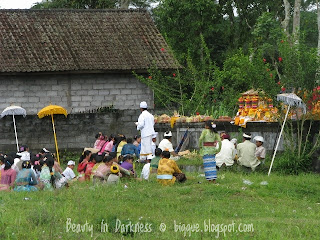 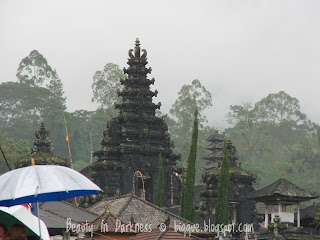 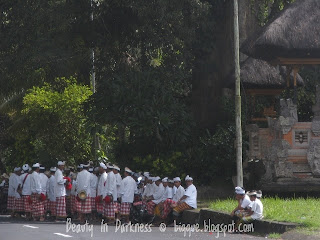 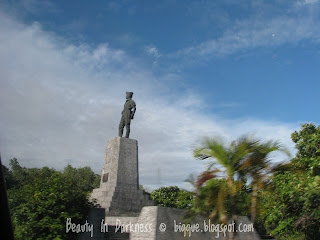 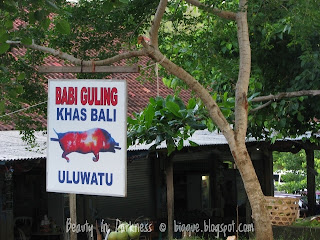 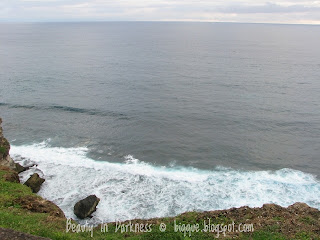 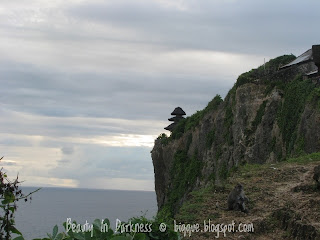 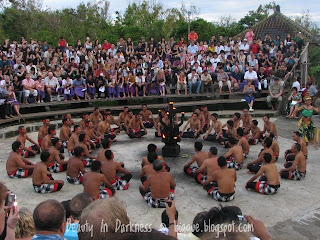 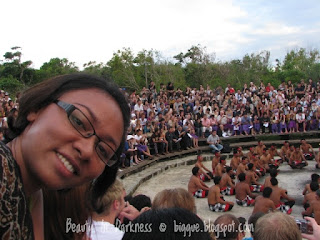 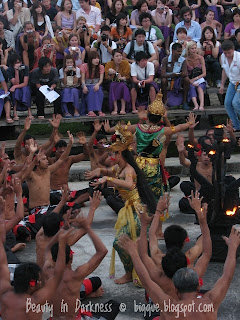 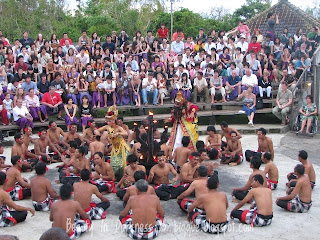 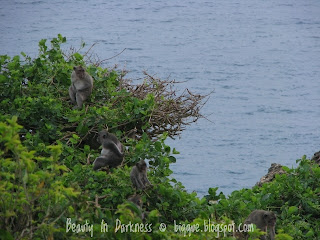 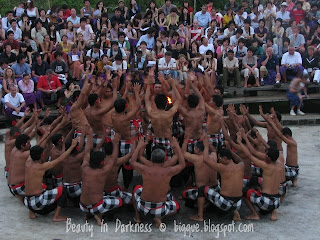 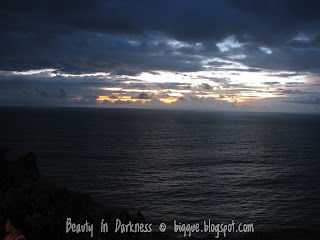 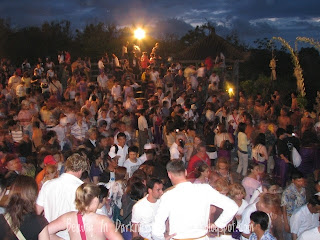 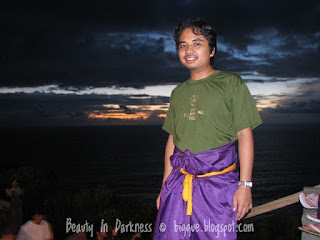 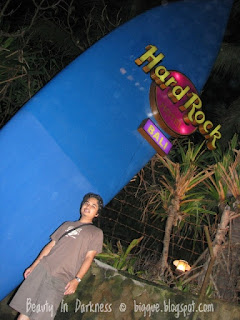 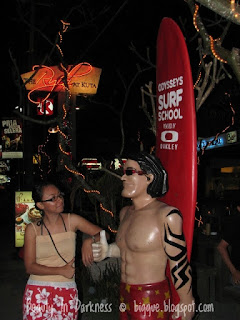 This is about travel n vacation, travel-indonesia-bali