Woke up and took our bath. We made our own breakfast (hot cup noodles with egg), as we didn’t include breakfast for two when we booked for this room (rasa rugi sebab tak tau makanan camne kan…). Again, it wasn’t delicious but enough to keep the hunger away. We dressed up and packed unused things so that we have enough time to go out and come back, and head to the airport later. From our hotel room, cars started to line up, bumper to bumper.
“Kita nak gi mana arini?” I asked hubby.

So we stopped a bajai and kowtim with him on the charges to take us around town. We had asked the hotel staff on where to get fridge magnets (ni Skin nyer pasal la ni…aku pun dah addicted!) and they suggested us to go to Toko Sarinah (ha I remembered who she is, the princess of Kraton Palace in Jogja that open shopping outlets to help locals selling their kerjatangan). We noticed that Jakarta Pusat didn’t have cheap pasar or street market like what they have in Jogja. Or maybe we had come to the wrong area…maybe.
Along the way to Toko Sarinah,

“Mak aih! Jam gile!” we were so shocked looking at all types of transportations (cars, buses, cabs, lorries, motorcycles, bajai, you name it!) came from all directions! And there was a guy who shouted to all cars on the road, acted like a powerful police traffic who directed here and there. (Anyway, if he wasn’t the one who shouted and directed, the cars weren’t moving…).

Where’s the police traffic anyway?
We arrived at Toko Sarinah and shopped what we need. Travel habit, both of us must HAVE t-shirt and fridge magnet that stated the place name. Not only that, we managed to buy plaque and astray stated Bali and Jogjakarta. Yeay! Afraid of short of Rupiah, I used my credit card to pay all the goods (advisable to pay cash because when the credit card statement comes, you will see that Rupiah is being converted to RM and yet, you pay higher that it should be). This place actually sells variety of items and for those who have no time to shop around, this will be the best place to go. Anything. Everything. The price? Affordable.

“Monas Monument la ek…tu je yang rasa dekat…” I looked at our special edition ‘A Tour Cookbook’, which mentioned that Monas was said to be the last erection of Suharto.
We stopped a bajai again and asked him to bring us to Monas Monument. He amazed us with his way of cilok/rempit in between cars! And both of us were smiled and laughed, inhaled CO2 from other cars around us, while looking at a 3-tyres vehicle that might threw you away on the road, if it’s unlocked. The traffic was SO bad but the bajai guy said it’s normal. It even worst than KL man! Macet deh! Macet! (Macet is traffic jamm). To actually go to Monas, we have to make a u-turn at one junction which was few hundred meters away, but due to macet, it felt like ages, just to reach there. LUCKY we took bajai and we managed to skip and squeeze in at any space available.
We later reached Monas…but from the back road. Haha! Anyway, we just snapped some pictures with Monas at the background. We also took pictures with bajai and then we made our move to putar-putar around town. There was an interesting road sign, where we can actually find it in Malaysia, but slightly bigger or a lot bigger than what you see here.

“Ayang, amik gambar tu ayang! Kahkahkahkah! Gemuk cam Bigfoot!” I laughed. It was a man-crossing-road sign…but it was portrayed as a FAT man.

Enough with CO2 for today, we headed back to hotel. We took our packed luggage and checked out from the hotel. We called the yesterday coupon taxi and waited for him at the lobby. We waited………..waited………….and waited…………but the taxi still didn’t arrive.
“Haiiiihhhh…lamanyeeeeee…kita naik blue cab je la”.

And so we took the risk to ride the blue cab a.k.a the argo cab a.k.a the meter cab. It was the time to try the argo now! Our heart and the meter were pumping as one. Every km counted…and the traffic was terribly bad. It started from the first toll to the second toll (the spot where the water park was on the right and Mangga Dua, WTC were on the left). The taxi driver told that there was a fire below the bridge last night (the highway to the airport is actually a long flyover and there were houses below it). They had to close the most left lane because the bottom part of the bridge was destroyed.
We can’t take off our eyes of the meter…as it kept on increasing and increasing. But we were quite lucky when we reached the Cengkareng Airport, for the charge was almost the same as the coupon taxi! Thank god! We paid and took off our luggage, and headed to the International Departure. (Sempat lagi amik gambar atas trolley…hahaha!) We walked around and checked our departure time.

Nice to meet you, Pak DELAY Wijoyo.
Dinner was taken somewhere in the airport. Opened my purse, I had few thousands left and I had to spend it off! We walked into the souvenirs shop and try to look for any items that equivalent to what I had. I ended up with buying two non-framed printed paintings (one of it was being re-printed in different sizes due to its popularity).
To kill the time, hubby took some pictures of salt water aquarium and flat escalator (like what we have in KLIA). The announcer then called all the passengers to the waiting area coz its time to boarding. 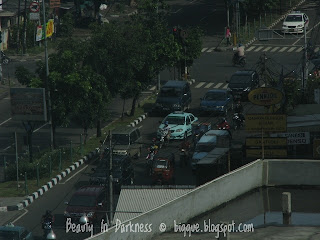 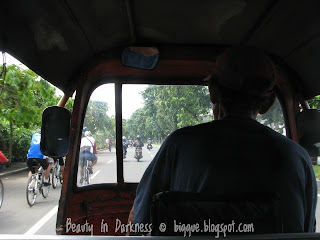 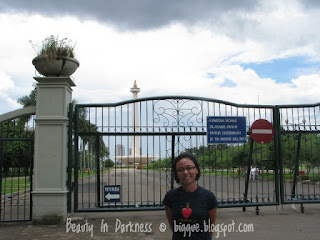 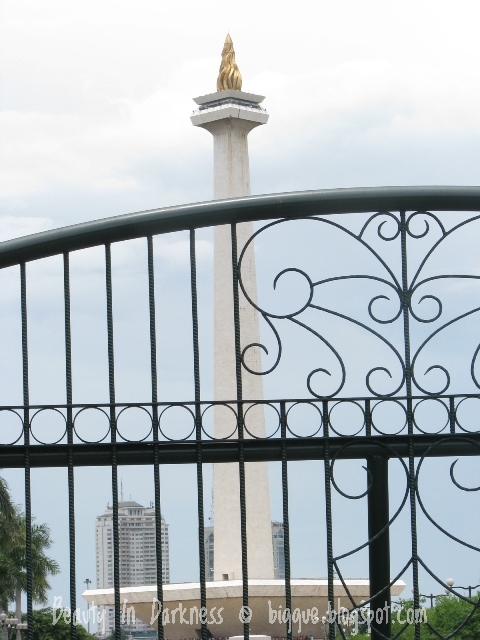 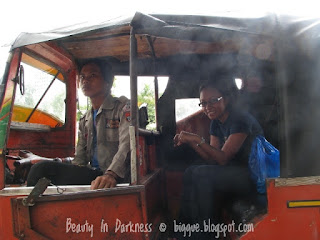 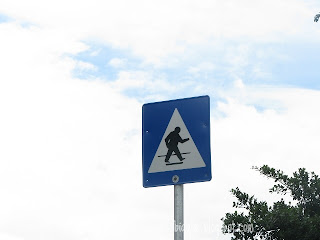 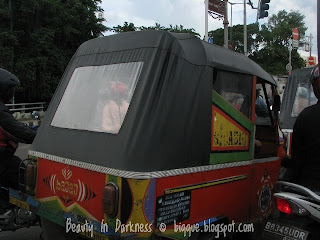 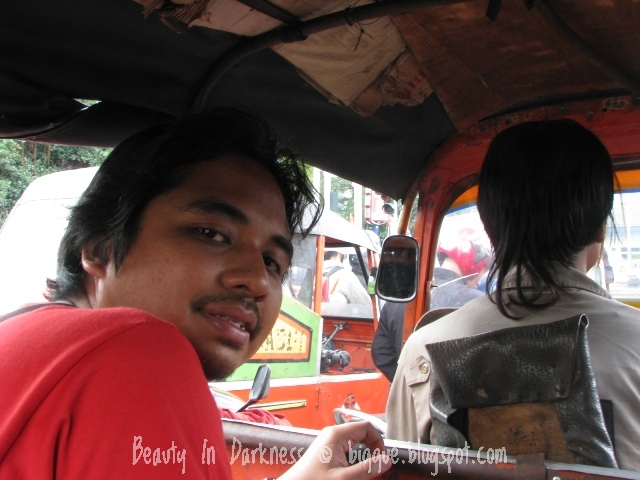 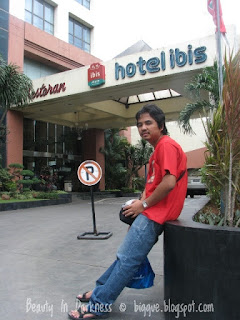 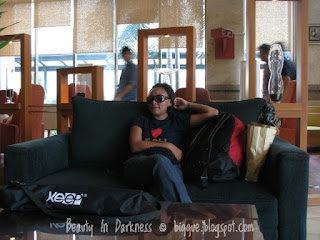 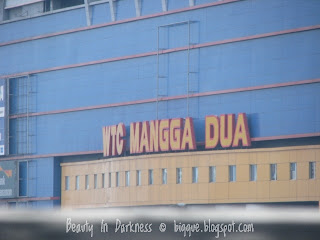 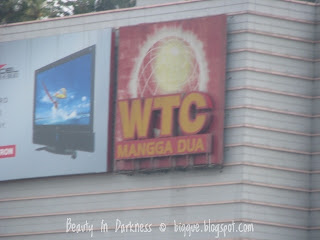 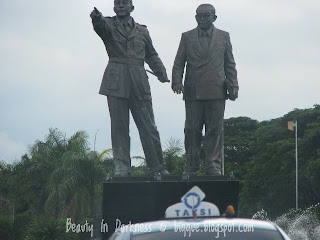 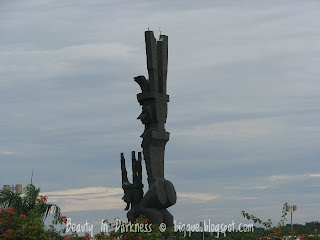 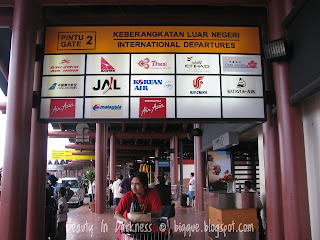 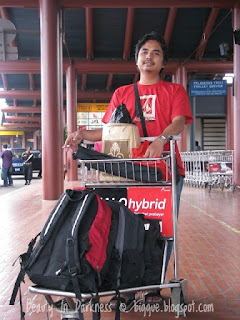 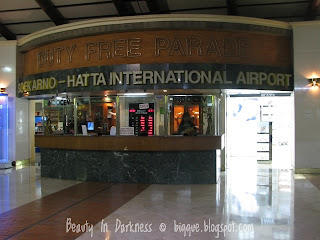 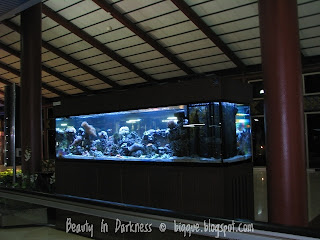 This is about travel n vacation, travel-indonesia-jakarta