All of us were actually torn out since we didn’t take lunch or bought any tidbits to munch, around this island. I can clearly saw those sweaty faces of my niece and nephew that kept complaining drinks in Singapore were expensive. Hahaha! I told them, they can only spend SGD10 a day for meal (which they spend SGD5 on breakfast), and they obediently followed that, coz it left them with another SGD5 for dinner. Kejam tak?

I told hubby that we could just ride a shuttle to explore the rest of the beaches side, since it is free and faster. From Adventure Park, we waited for a bus which the waiting lane, has being divided into 3 sections, accordingly. With clear direction on the signage (to Beach Station), the bus later came with half full passengers. No one actually off boarded at the place we were waiting, so we had no choice but to on board, and the whole family stood at the bus door.

We looked at the half full passengers, and not to surprise, they were all “that particular race who eat bawang” la kan! Pure Indians! Hahaha. OMG! It was like standing in the pool of nuke power plant! You know that unpleasant body odor, rite? All other passengers, especially the youngsters, were laughing and shouting “Busukkkk! Busukkkk!” and guess what? Those Indians laughed happily “Hahahaha…”, coz they thought that these guys were making funny jokes whenever the bus turned!

We had to cover our noses, all the way to the Beach Station, and it was a relief when we finally hopped down the bus. Puii! We laughed out loud with other passengers, telling that we could have died suffocated if we stayed in the bus for another 2 minutes! Hahaha! 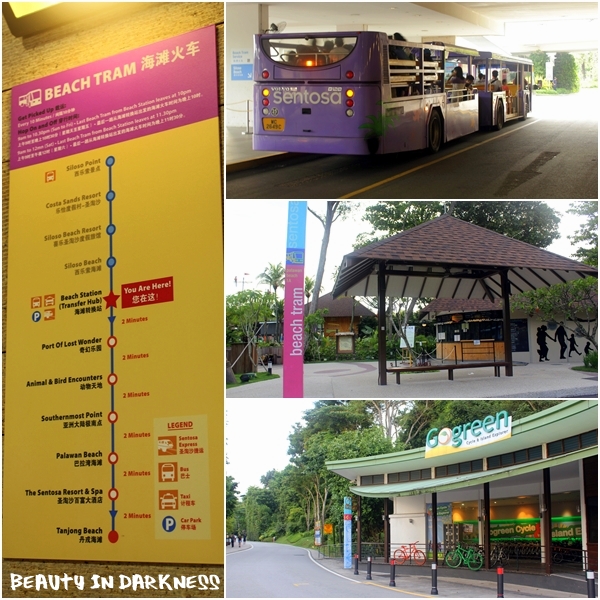 At the Beach Station, hubby suggested that we should stop at Palawan Beach and Siloso Beach, the two most famous areas to visit. I knew he had an agenda there, but I couldn’t figure out, yet. We queued on the other side of the road, and hopped into one long buggy-style train. Lega tak payah jalan! Few minutes later, we stopped at Palawan Beach, where we could see one huge rope bridge, crossing a man-made river. 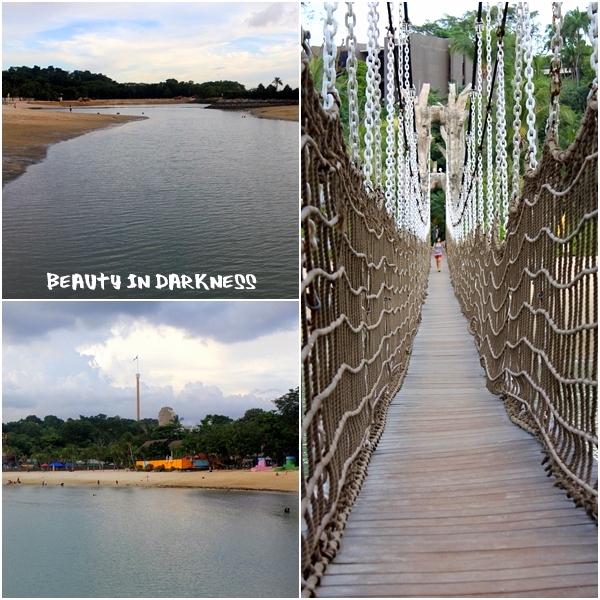 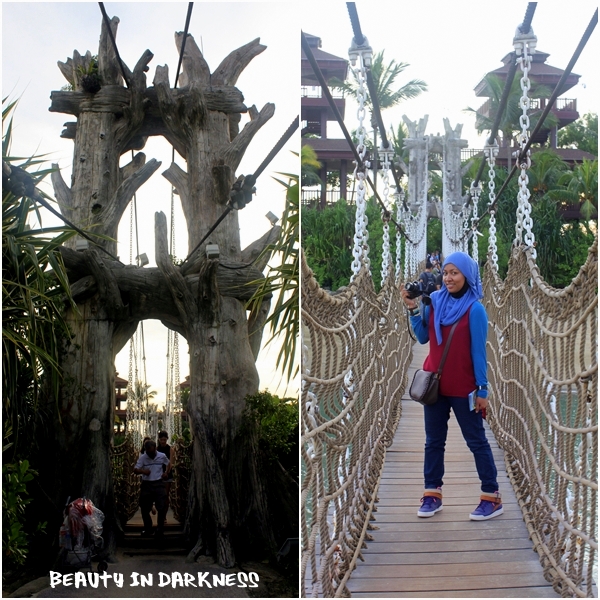 It was so serene to see white sandy beaches, with huge panorama right before us. Lamanya tak pegi pantai. My niece and nephew wanted to swim but they left everything in the bag that we stored in the locker. Hahaha! So we crossed the bridge and took few fun photos out of it. 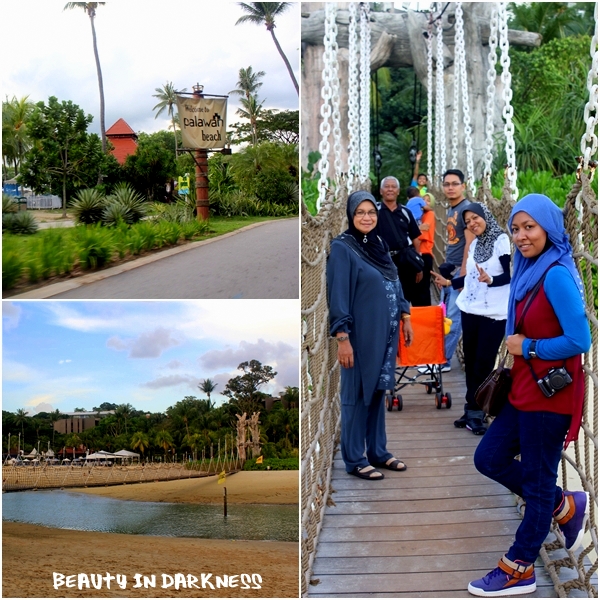 “Owh now I know why you wanted to be here…” I looked at hubby’s face. There was couple of watchtowers, overlooking the southern most point of Continental Asia.

“Hehehe…of course.” He smiled. Well, he was the one who made the itinerary. I had no objection on that. 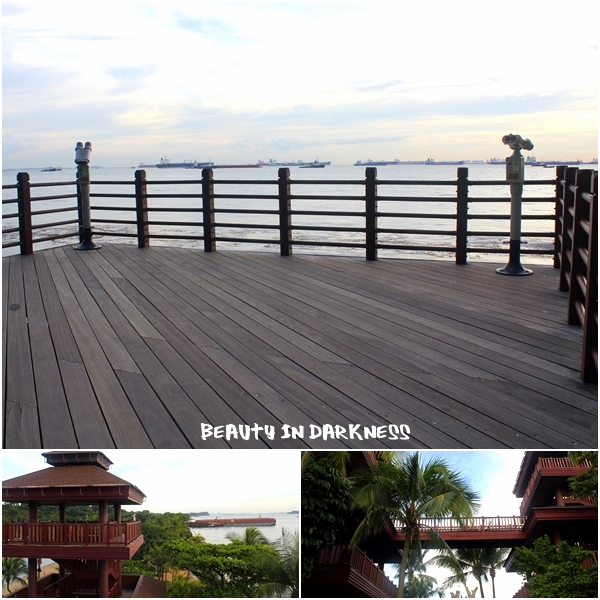 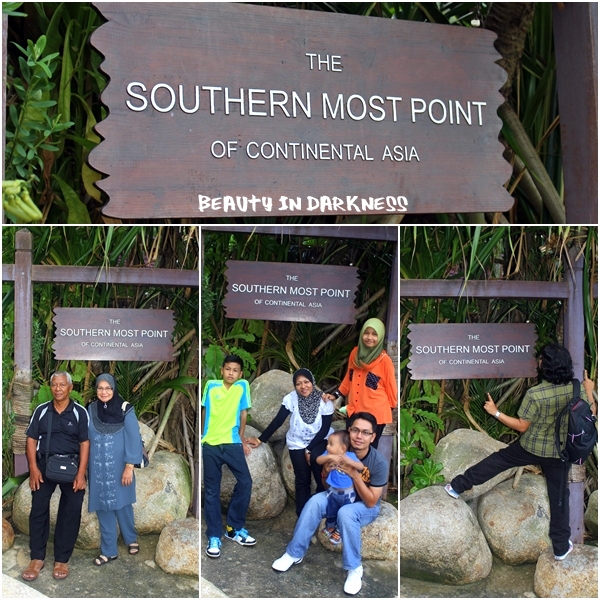 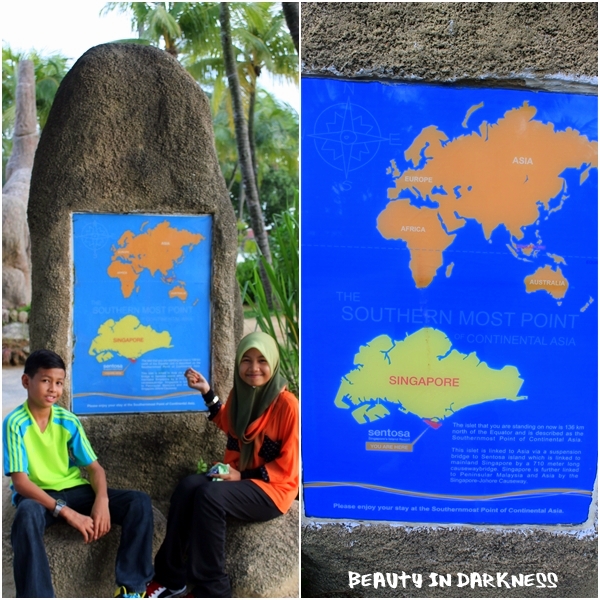 He was too eager to see what’s on the shoreline, so he climbed one of the watchtowers, while the rest of us sat by the beach, enjoying the breeze. The beach was tidy and clean, but nothing much to explore, just a stretch of big ships over the sea. We snapped few pictures on the landmarks, before we decided to return back to the tram stop. 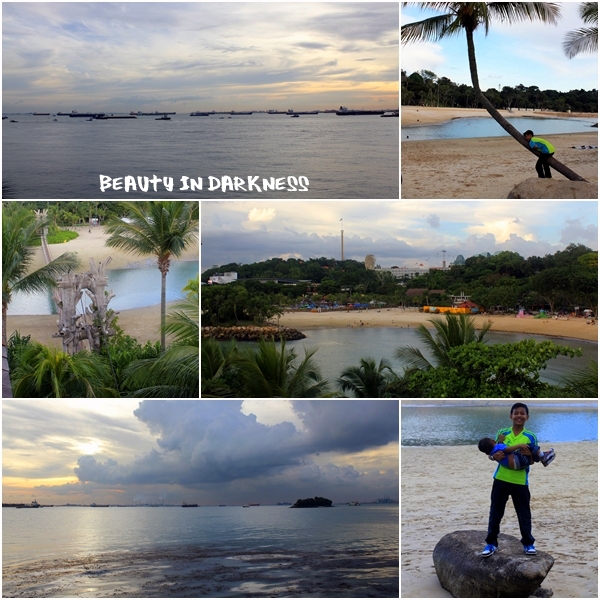 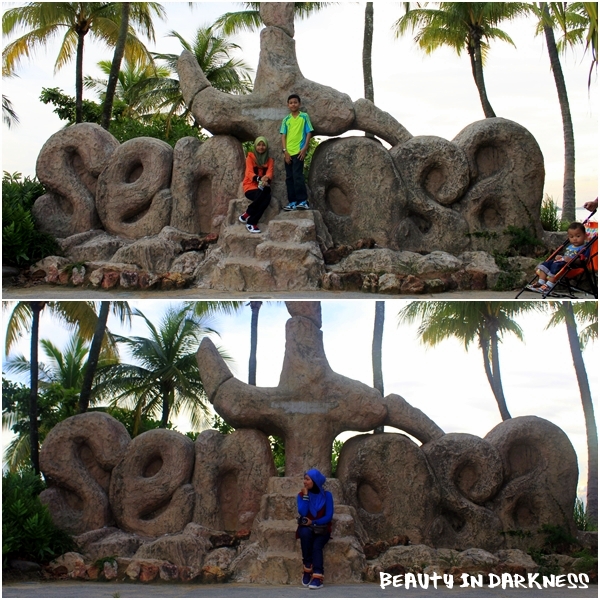 From Palawan Beach, we continued the tram ride to Siloso Beach, where I told my sister that I really wanted to see that SILOSO signage. It was getting dark and almost Maghrib, but I told my sis that we will stay there only for few minutes.

Luck wasn’t on my side, the tram stopped by the Siloso Beach and what I saw was, an under construction signage! Pfft! Adding to the frustration, the tram didn’t arrive for more than an hour! In the dusk, we had to walk further down the road, to catch the tram, before others hopped in. Sedey! 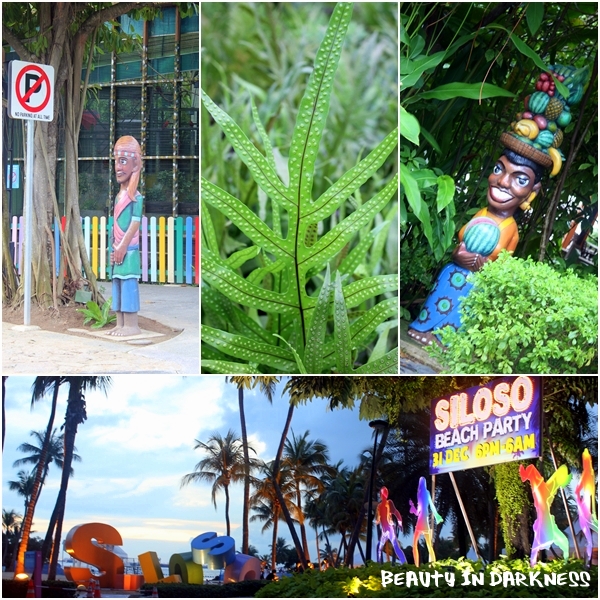 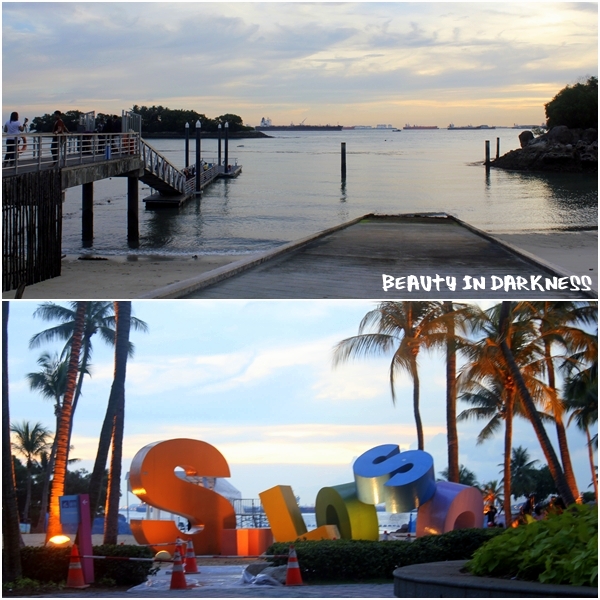 We were stressed out and had no more energy to walk. From Beach Station, we took a tram and went back to Imbiah Lookout, walked to the locker and took our bags. The weight of each bag was mentally “double up”! We almost cried in hunger before we reached Vivo City. Initially, we thought of having dinner there, but I told my sis that we wanted to try Sup Tulang Merah in the city.

Pity my sister and her family, they finally had no choice but to follow us. Earlier, hubby googled the best Sup Tulang Merah and the best and famous Sup Tulang Merah is located at Golden Mile Food Court. We took a train and stopped at Beach Road, but we had no idea where was the Food Court. We planned to take two cabs from the other side of the road, but again, luck wasn’t on our side. It was super hell of thorny night when NONE of the cabs wanted to stop, what more knowing where we were heading. AND WE WERE SUPER HUNGRY!

We finally got two cabs, where hubby and I split to marshal each cab. The distance weren’t that far and we paid roughly around SGD4 to reach this place. We quickly looked for the stall of Deen Tiga Rasa, and ordered a set of 10 pieces with the price of SGD7. This set came with bread. On the other hand, Pak Ein and his wife ordered fried rice (also in red color). It was heaven on earth, and we enjoyed the Sup Tulang Merah to the final last bone. SEDAP, SUMPAH SEDAP! 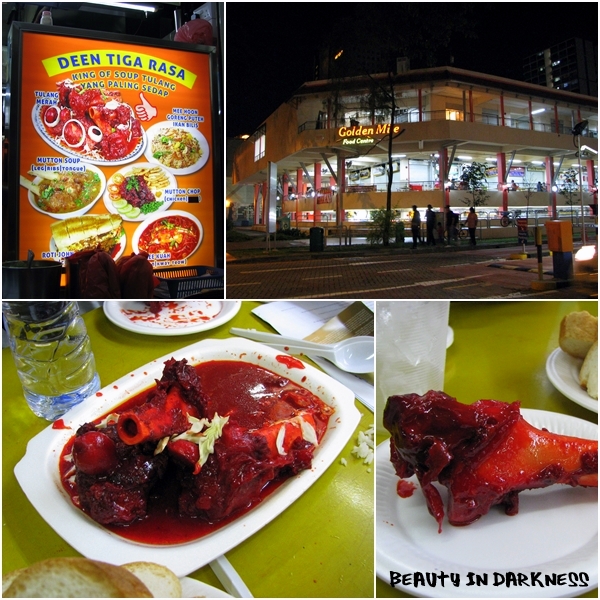 After an hour, we got ready to go back. This was where the drama started.

I never…NEVER thought that it will be SUPER DUPER difficult to get a cab, in front of this food court. Throughout our travel to other countries, we NEVER hire a cab, except in Vietnam and China. I mean, we can really count, how many times we took a cab ride. I even told my sister that we didn’t do that either, in Singapore. I apologized to her many times, coz I didn’t expect that no cab, NO CAB, will stop for us. It was almost 11PM and I could see how sad my family was. I couldn’t even dare to look at Abang Ngah’s face. Diam tu maknanya marah lah tu. Eiii takut!

I seriously don’t get it. I wasn’t sure why the cab didn’t want to stop. Was it almost midnight? Was it due to our Hostel location? I almost ran towards a cab, just to make it stopped! “Hoi, tak mau duit ke?” Sambil tabur-tabur SingDollars.

We finally managed to persuade two cabs to send us to Lofi Inn Hostel at Dickson Road, near Jalan Besar. It wasn’t that far, weh! We paid each cab around SGD8, inclusive midnight charges. Pfft!

After a quick registration, we headed to the room, and took turn to shower. Our stay story, can be read here.

Unbuttoned by Biqque at 3:06 PM

This is about travel n vacation, travel-singapore-sentosa