“So, Hai Van Pass, anyone?” Hubby suggested, as per planned itinerary.

“Jom!” None of us declined.

As usual, Dan Arif was the same person who led the way, since he had a quick glance on google map back in the hotel, the night before. The road here in Da Nang seemed less users, in good condition, and easy to use. Thus, riding in Da Nang wasn’t a big challenge to us compared to other big cities in Vietnam, like Ho Chi Minh and Hanoi.

Before we pursued the journey, we stopped at the same place to refuel. The auntie gave the impression that she had won lottery when 4 bikes asked for full tank. She gladly joined Pak Ein and his wife (took off her con hat, hand-combed her hair) and posed for a picture. 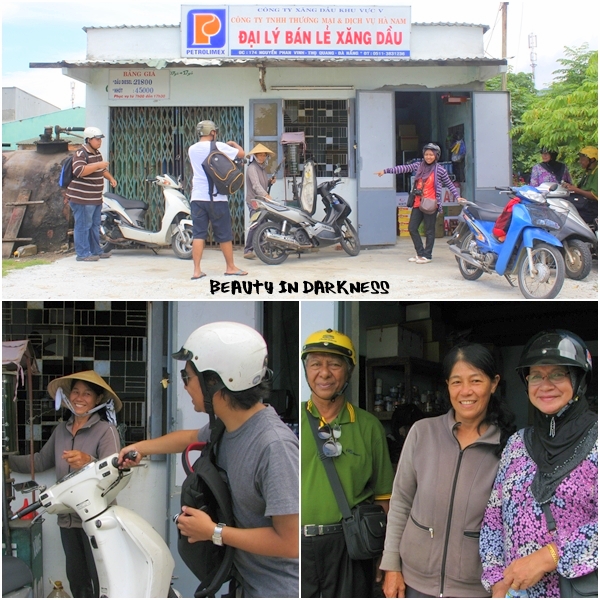 We then passed by My Khe beach and headed straight to the longest suspension bridge in Vietnam, named Thuan Phuoc Bridge. Along the bay, there were lots of fishing boats that were inline, together with few traditional used and unused coracles. The scenery was breathtaking, more or less, like what we have back in our fishing village in Perak or Penang. 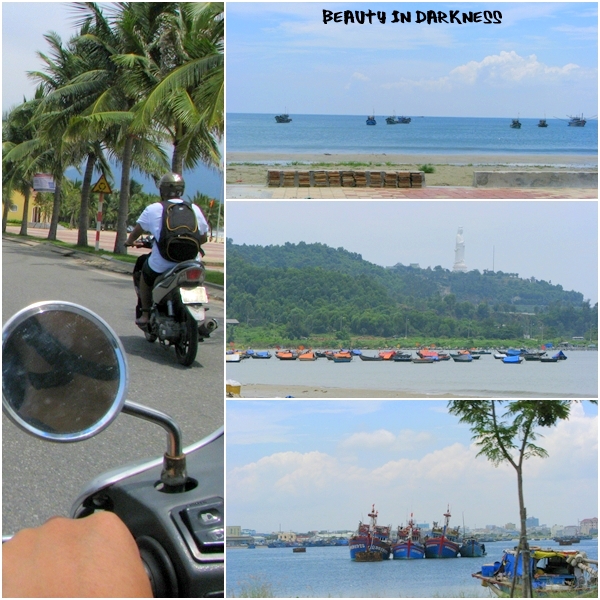 While passing the bridge, Dan Arif did strike a peace-sign. That showed how leisure we were in enduring the journey, crossing the 1.8km length of suspension bridge. The excitement got higher and I can see that we were so thrill to reach Hai Van. 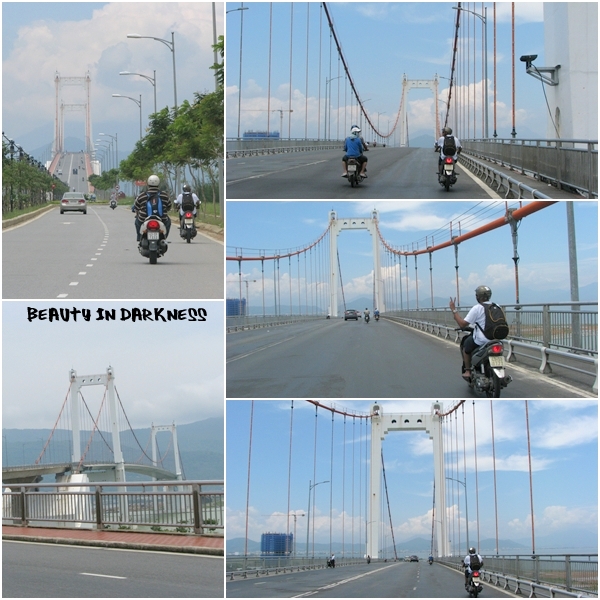 It is said that Hai Van is one of the most scenic hillside roads in Vietnam, winding roads of a paved mountains, a peaceful and quiet place to discover. It is indeed, an impressive landscape, that awe-ed us when we locked our feet at one of the corner. 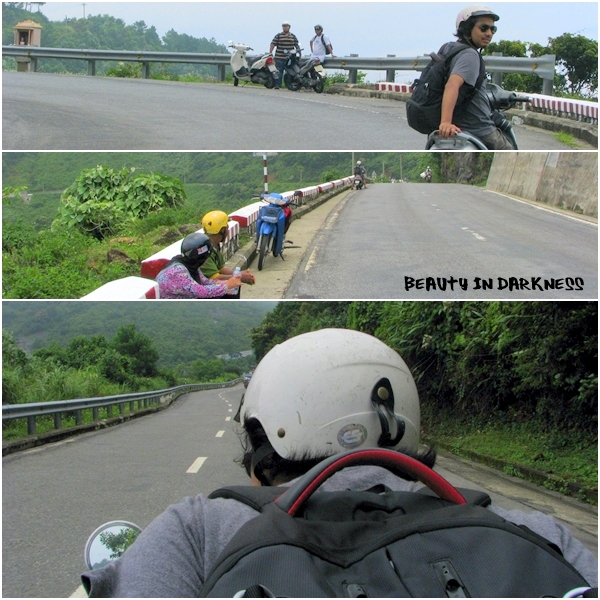 “Hai Van…Sea Clouds…” that’s what I read my tour cookbook. Means, the peak is in the clouds while the foot is close to the sea. 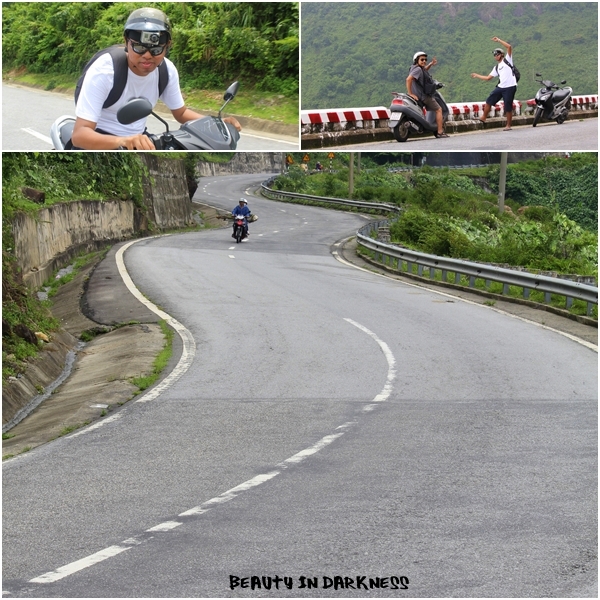 We thought of stopping by to have a quick lunch at one of the corner, but the smell of cow dung had killed the initial intention. So we continued riding and riding, guess what, group of cows were sitting right in the middle of the road, just before one corner! 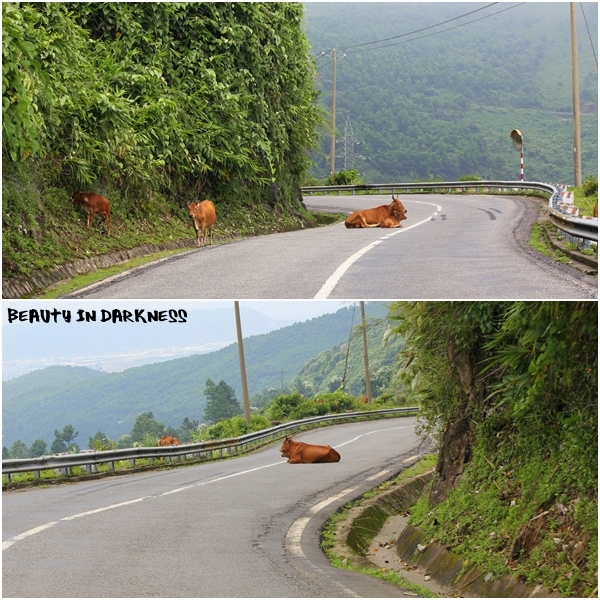 We finally stopped at another open area, complete with water pipe (broken pipe I guess) almost appropriate place to have our meal. Who knows that suddenly, a lorry of pinkies passed by, which later left behind a super stinky odor right on our nose! Fresh meat on delivery, babes! Hooo! Busuk gile! There goes our second try. No lunch for that day. 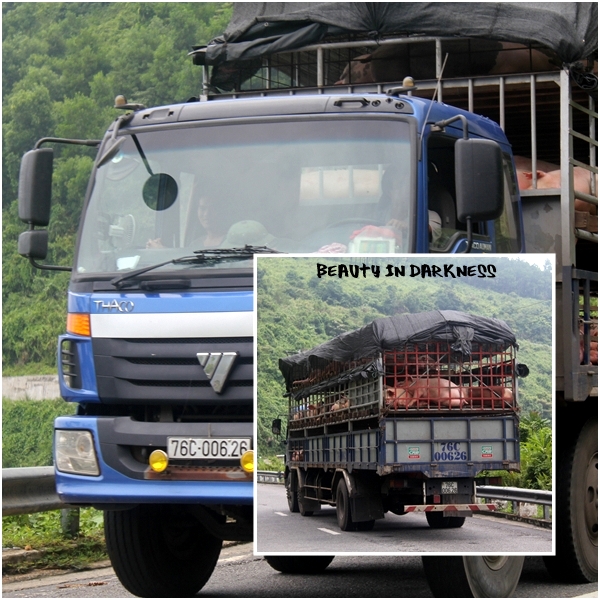 Not furlong, we decided to stop to have a group pose and crazy jumps. 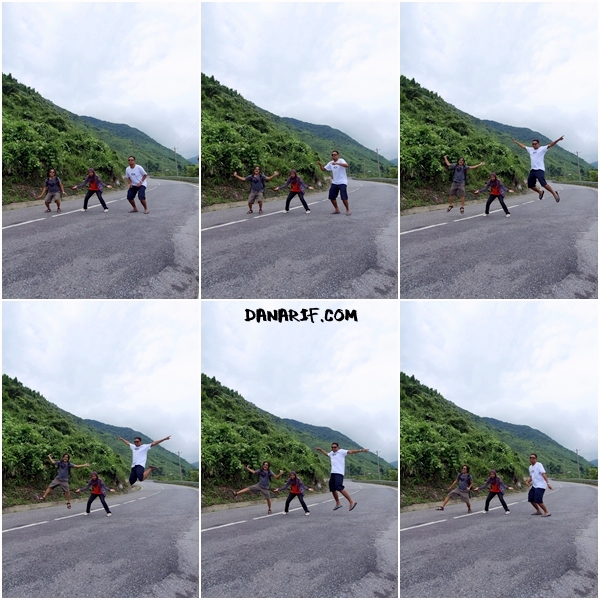 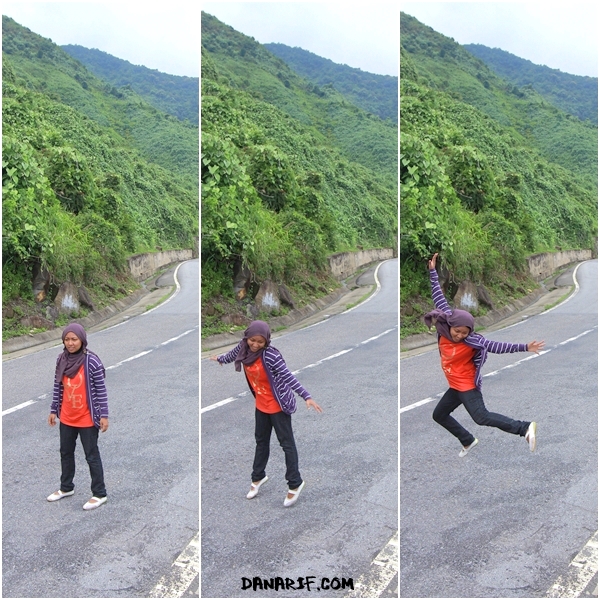 Well, I normally like to lay flat on the road (like what I did in NZ) but this time, no ah-ah, pinkies pee all the way down to Hue!
While jumping dozen’s of time, hubby told me that he saw one train tunnel, in between mountains. This might be one of the vital mode of transports during the Vietnam war back in the 70s. It is estimated that Hai Van mountain itself, held seven tunnels along the 3km stretch. Wow! Whether it is still being used or abandoned, honestly, I can’t tell. 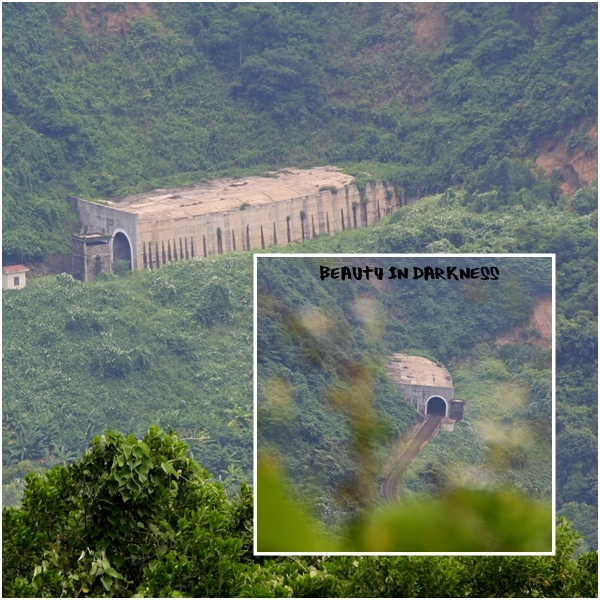 The journey continued. On Allah’s will, we didn’t face the danger of bended roads, uphill, where we reached the most top, where we could view both south and north of Vietnam. How do we know this? The fortifications of French were seen, right before the huge Da Nang map. 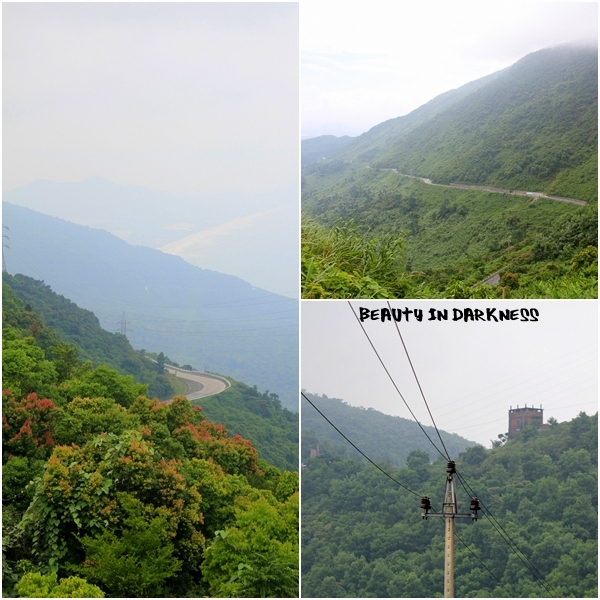 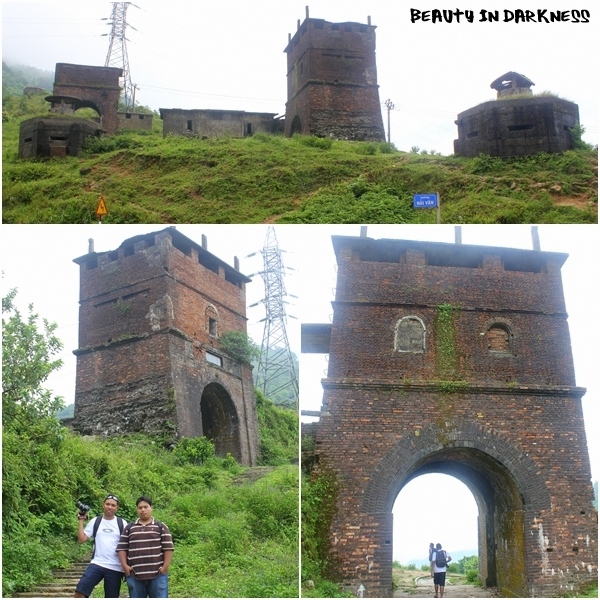 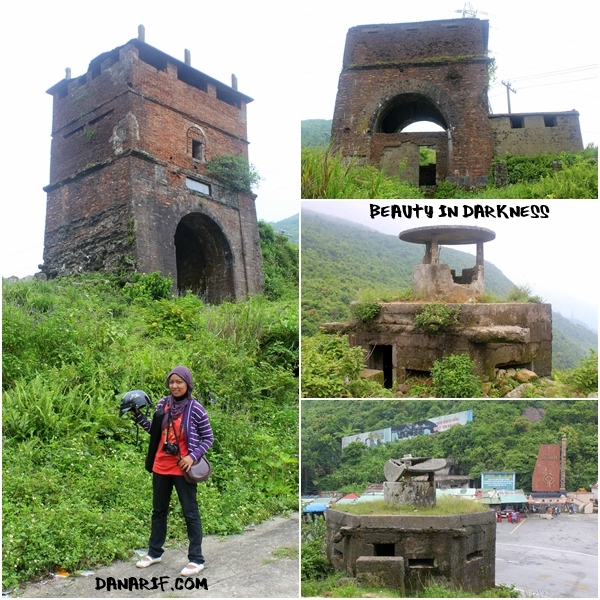 Here, we enjoyed the whole vista of Da Nang, the Tien Sa Seaport, Son Tra Peninsula, Cu Lao Cham island, and long sandy beaches of Lang Cho, that we initially thought of Hue. Misty and foggy, we stood right on the highest peak, 500 meters above sea level. While hubby and Dan Arif explored the French forts, the rest of us sat next to the signage, and later posed with the one and only road sign of Hai Van. 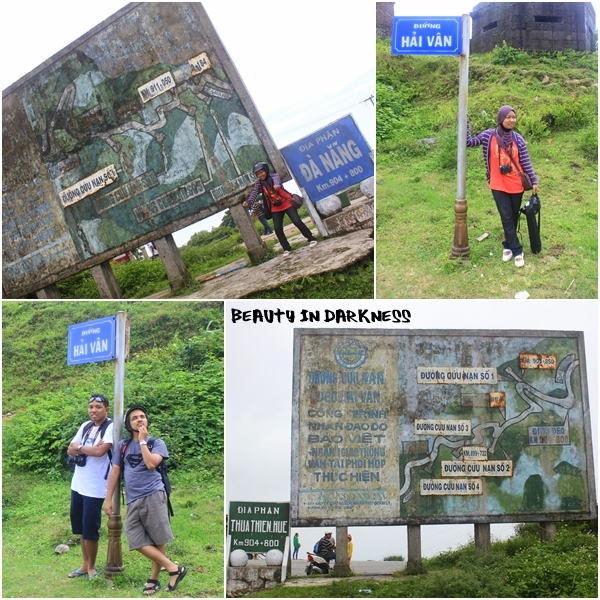 Opposite those forts, there were local vendors having their business, selling local foods, handicrafts, and souvenirs. Few tourists were also found, sipping coffee while enjoying the mountain view. Breaking the silence, a couple of Caucasians rode with locals, on German old classic bikes, that produced loud echo in the area. 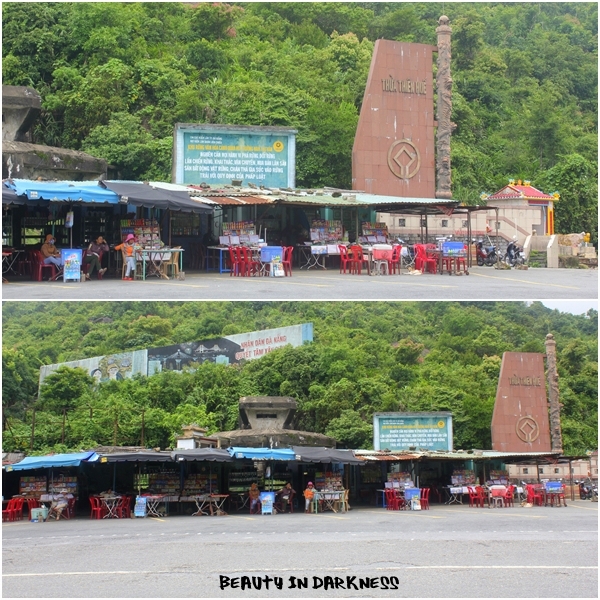 We later decided to ride down the hill, before sunset. Looking at the road condition, with no road lights, we better made a move before we lost our good vision. Our tummies were playing hardcore song, asking for late lunch or perhaps, dinner. A very, very good dinner.
Leaving Hai Van with emotions of the past, this path can be considered as the most impressive route, with the presence of green trees and blue sea, herein the beauty of Hai Van. 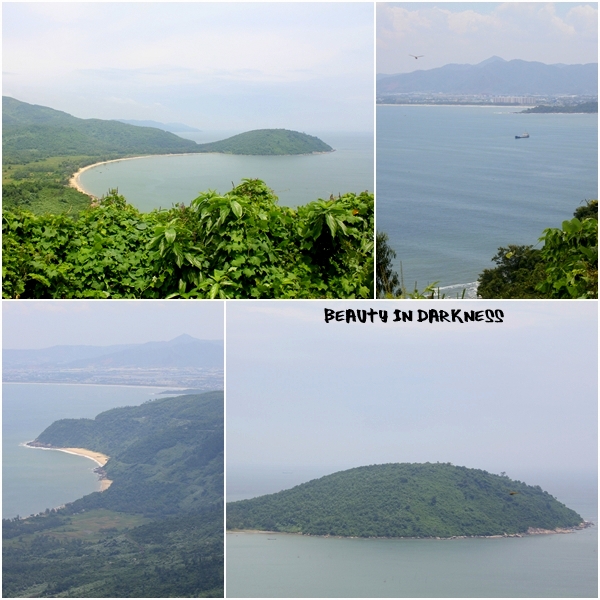 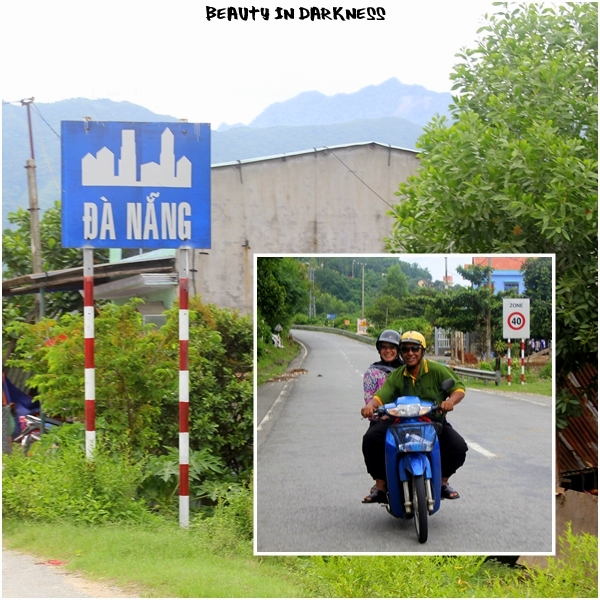 Unbuttoned by Biqque at 4:40 PM

memula aku baca ayat Hai Van is one of the most scenic hillside roads in Vietnam, excited nak tengok next gambar..