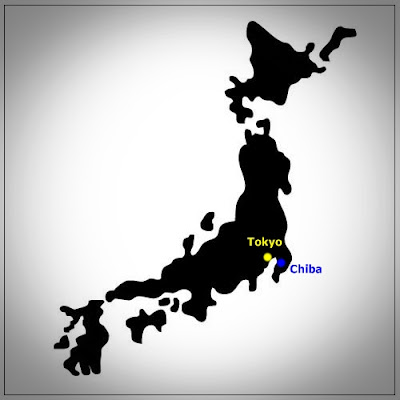 From Ryogoku Station, we stopped at Kuramae on Oedo Line, and changed to Asakusa Line for Asakusa Station. We just had to walk for approximately 2min before we saw the Asakusa Tower on the right. We didn’t wait any longer and walked straight to the Kaminarimon (Thunder Gate) that is located outside of Sensoji Temple. 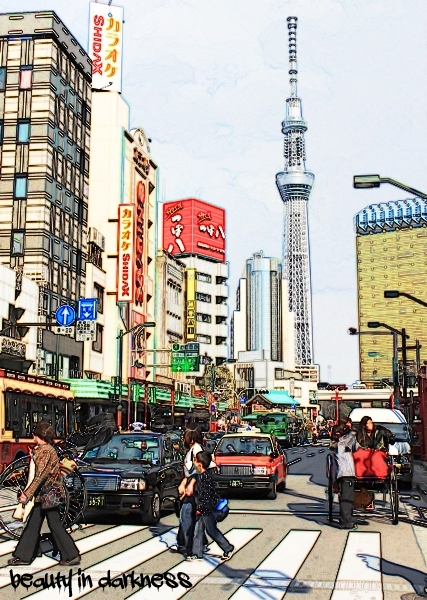 Asakusa was formerly acknowledged with kabuki theaters and large red light district during Edo Period. Anyhow, for many centuries, it has being modernized and equipped with movie theaters, which later, were destroyed during WWII.

The reason why we chose to explore this place was due to its super large red lantern at the gate (symbol of Asakusa), as well as Nakamise-dori (the shopping street) that provides VARIETY of traditional, local snacks, and souvenirs. Trust me, these rows of stalls can make your eyes popped-out! 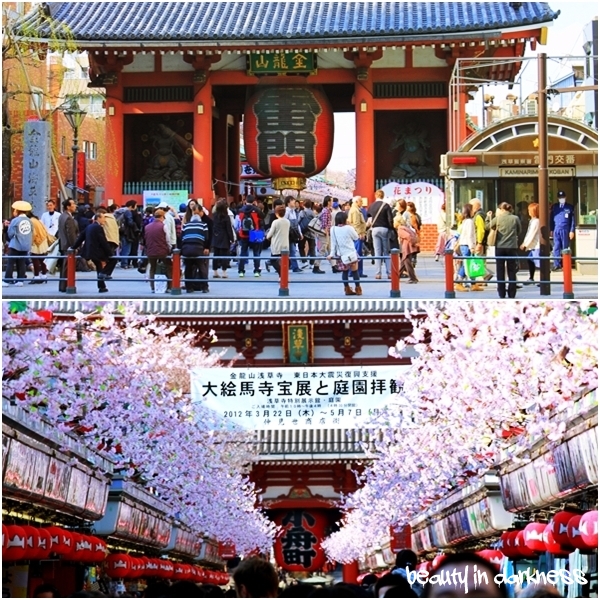 To get closer to the Thunder Gate, we had to cross the street and joined the crowd. They left us with no space to get a couple shot with the red lantern, so we had to take two separate shots just for our Wall of FRAME. 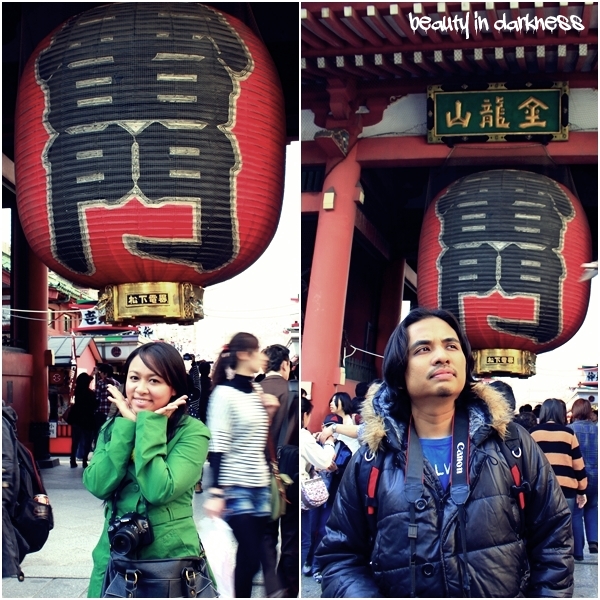 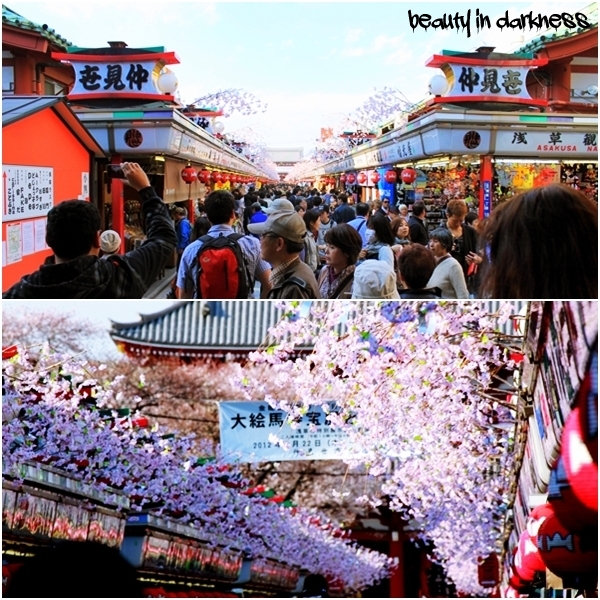 Once we entered (by the way, it was free), we were greeted with two colorful statues on both sides representing a woman and a man with ball in her/his hand. Right down the statue, we saw visitors encircling one street hawker who selling bottled mineral waters.

“What’s the fuss?” I questioned.

It took me 5min before I saw what the hawker did! He actually placed the bottle on the ice and popped it hard! In a blink, I saw one sphere ice cube, stuck in the bottle!

“OMG! HOW DID HE DO THAT? THAT’S F**KING RIDICULOUS!” I couldn’t believe my eyes.

I waited for the next two buyers, before I finally accepted the act. Unfortunately, it happened SO fast. Thus, I didn’t manage to capture the sphere ice cube. Sorry…seems like you guys need to go to Japan to experience this, hmm? 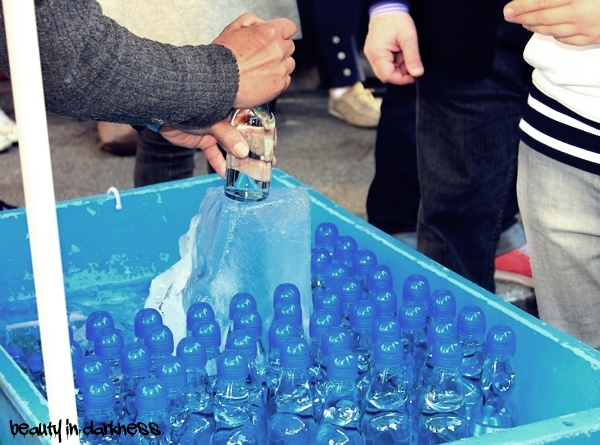 “Ayang? Ayang?” I couldn’t find hubby in this pool of people.

There I saw him taking photos like crazy! I quickly joined him and dragged him into the first shop that sells THOUSANDS of souvenirs! I got insane just by looking at the fridge magnets! 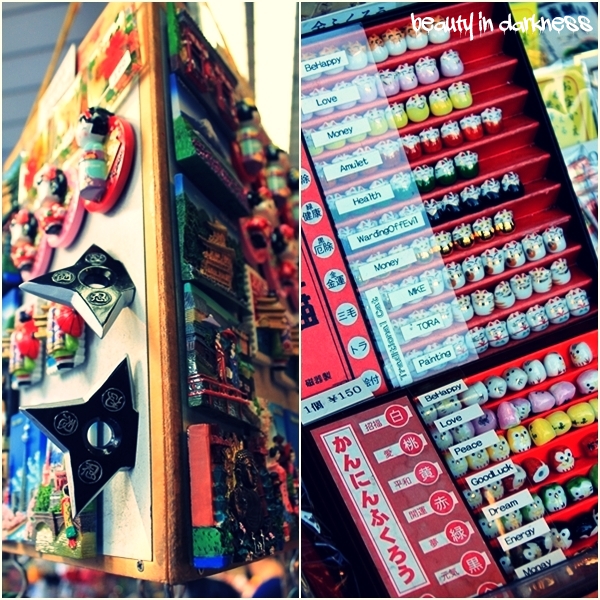 “How bout this?” Hubby showed me a geisha magnet.

“Wait…this is only the first shop and you already freaking out.”

“Ok, we walk first…later on the way back, we buy, ah?” I warned hubby.

Indeed, there were MORE to choose! I aimed and tried to remember hard, but my brain wasn’t working well, for all shops were decorated with fake sakura on top. I TOTALLY FORGOT WHICH SHOP SELLS WHICH MAGNET! HAHAHA! 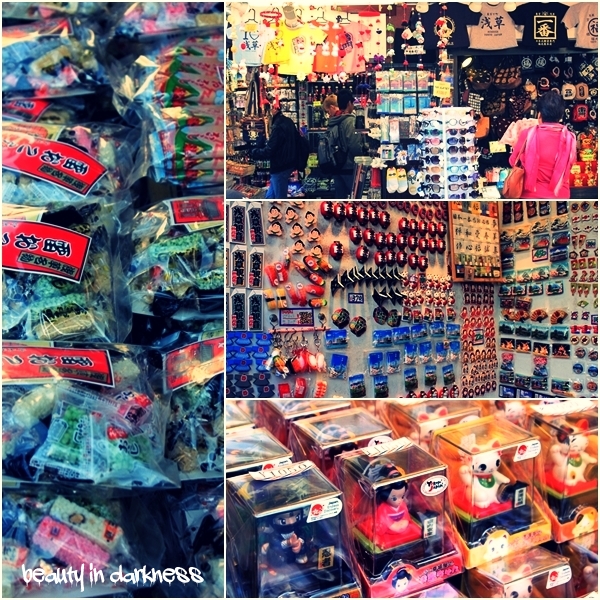 Along the way, we bumped into dogs and cats. Amazingly, they were well trained and didn’t poop around. 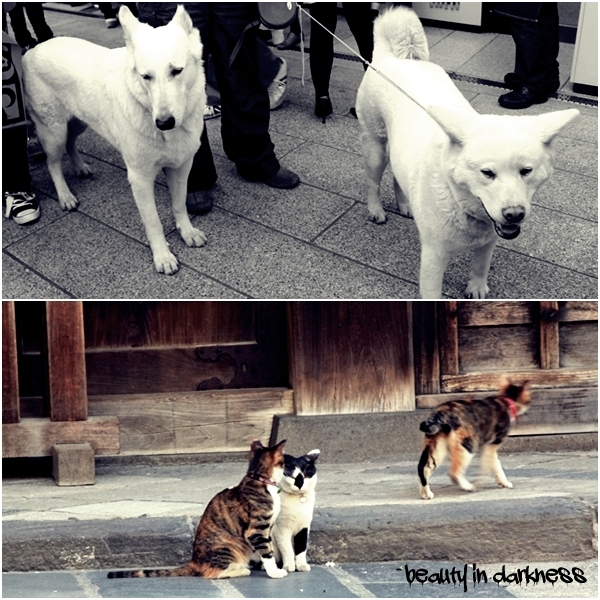 We passed by the second gate, Hozomon, where we saw Buddhist believer paid respect by “sweeping” the vapor onto their body. Figuratively. Meanwhile, some were tying white papers on the wire-lines, some were “reading” their fortune from the mantelpieces, and some were “cleaning” their mouth from the dragon fountains. Perhaps, Buddhist rituals. 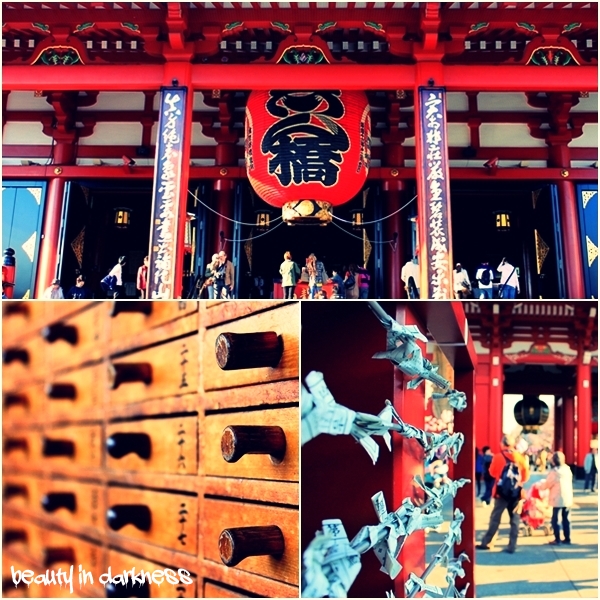 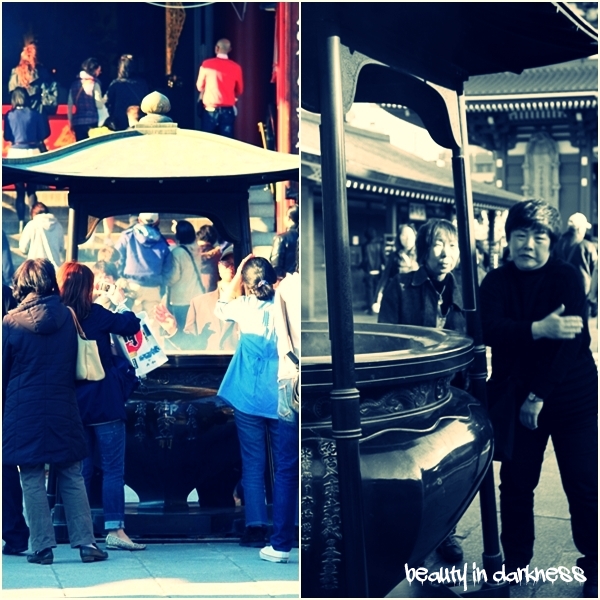 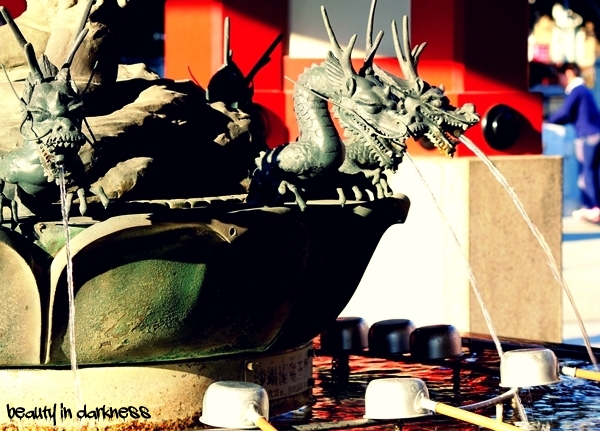 “There…the shrine.” We finally saw the small yet famous temple.

Sensoji Temple a.k.a Asakusa Kannon Temple is the OLDEST temple in Tokyo. The hall was reconstructed, purposely to comfort the pilgrims. On the left, there stood the 5-tier pagoda, where this whole area will be closed for Matsuri (Shinto festival). 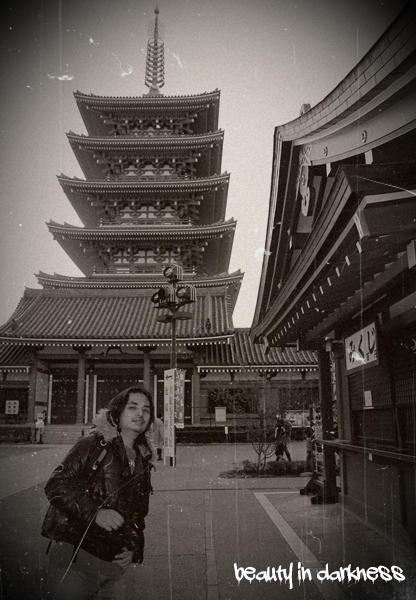 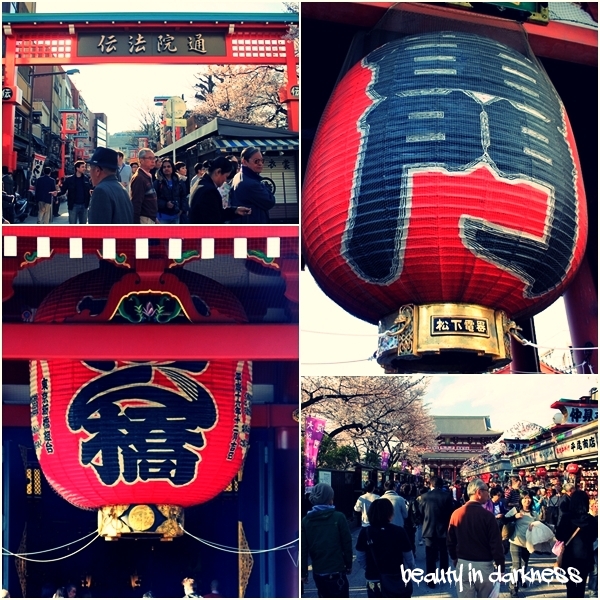 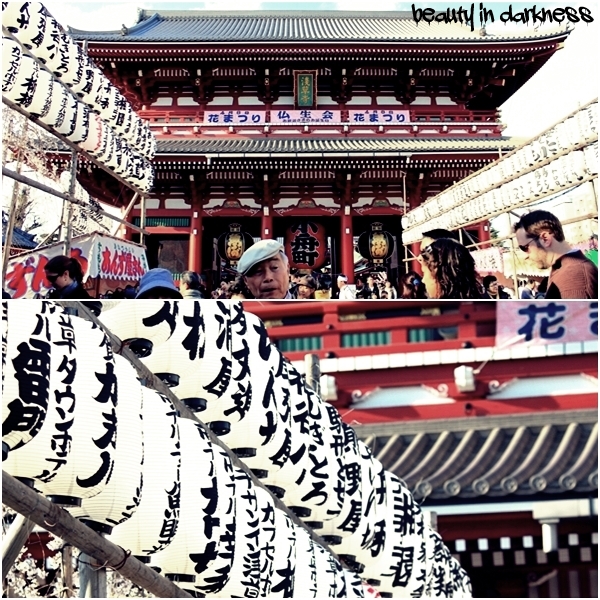 I then, laid my eyes on two traditional/cultural items. Kimono and folded paper fan. But looking at the price and thinking where to wear and where to keep it, I had to pass the option. 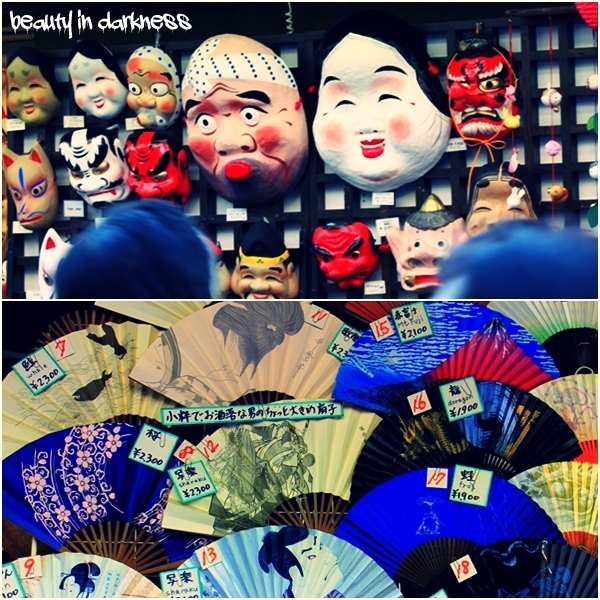 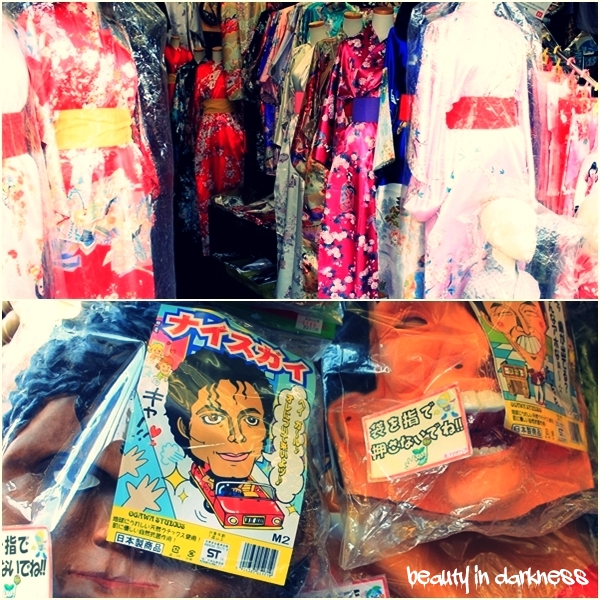 “Wanna eat nasik impit?” I offered hubby while taking it out from my handbag.

In a minute, I saw hubby ordering a piece of rice cracker from the hawker, next to the takoyaki stall! I was FORCED to keep back the nasik impit and walked towards him. 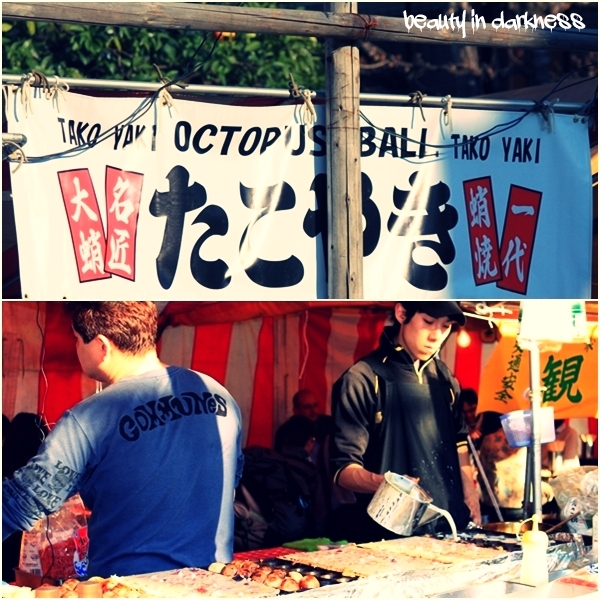 “Rice cracker.” He was MUNCHING it! Pfft! I tasted a bit and it wasn’t that bad. Salty and crunchy. 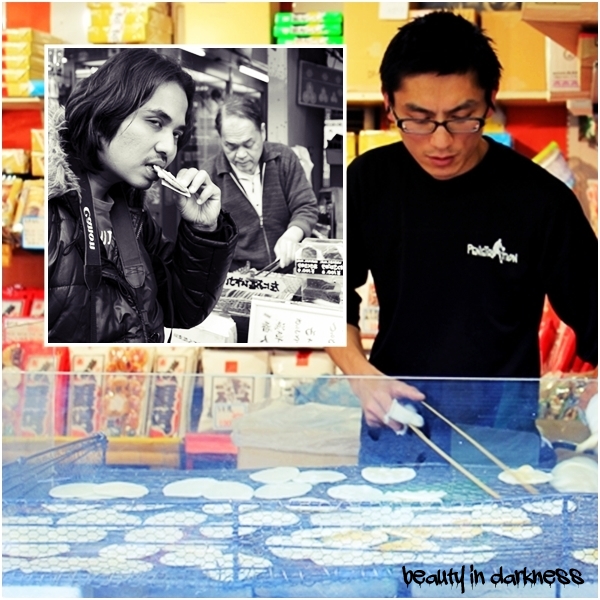 We looked around and found that there were more and more colorful and handsome snacks. Banana color biru and pink???!!! 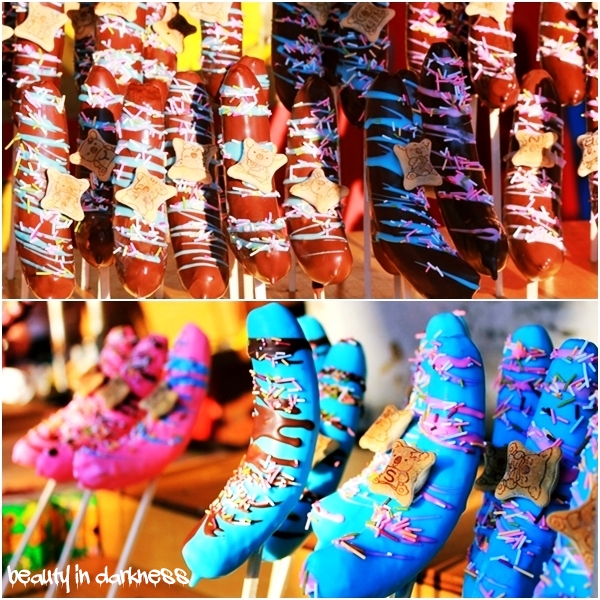 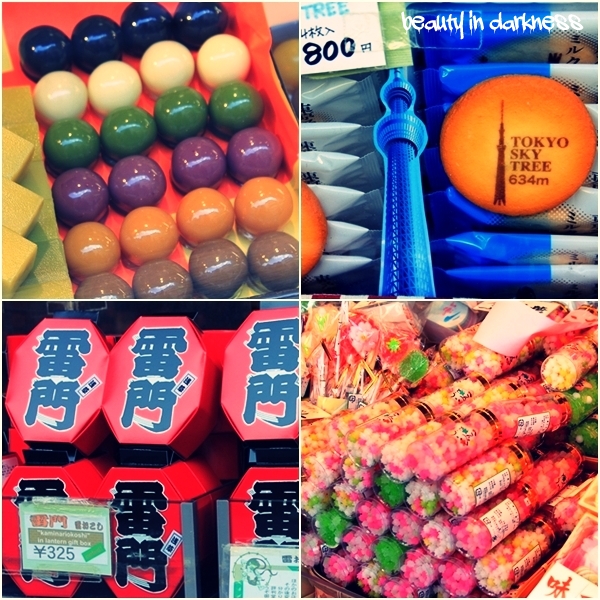 Close to that area, there were rows of white lanterns and on the other side of view, we saw, again, the Asakusa Tower a.k.a Tokyo Sky Tree, standing still, with a clear blue sky as the backdrop. 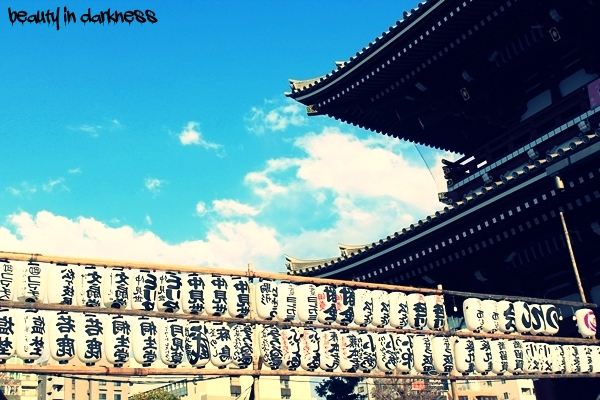 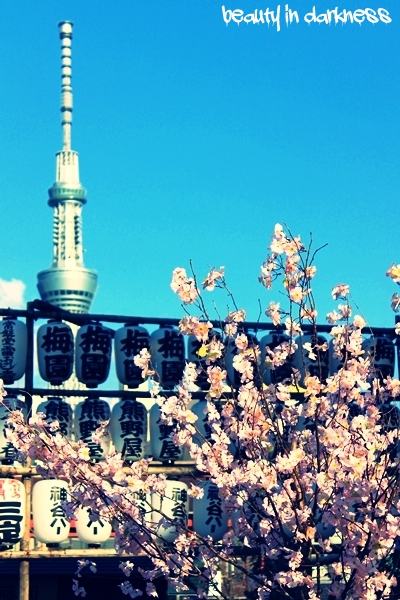 After enjoying the scene with a group of butterflies flying in our tummy, we walked back to the first gate. While crossing the street, we saw one sculpture resembling a flaming torch in gold, right in front of the building that producing a noted beer called “Asahi”. 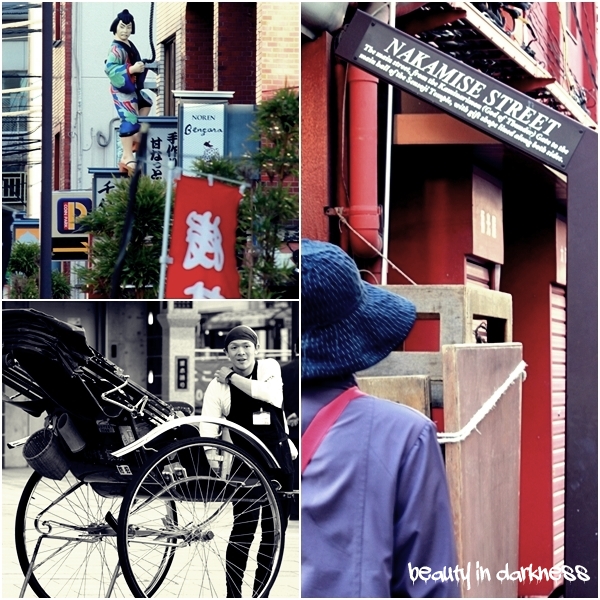 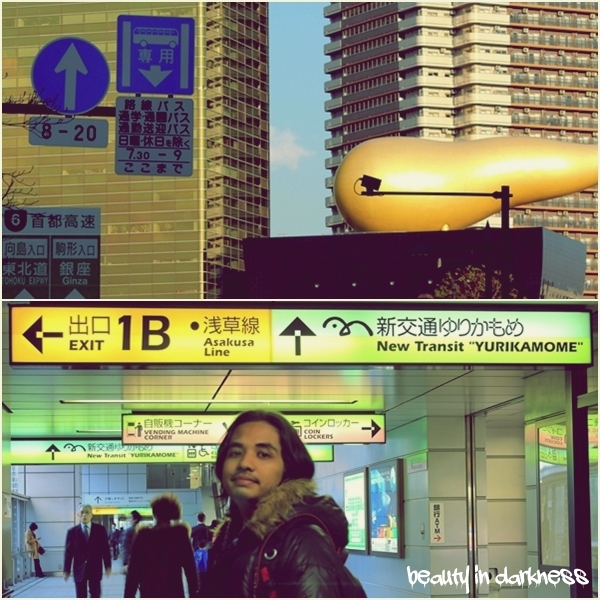 the most expensive rice cracker i've ever tasted so far kot.....100yen per piece kot.

wow..you did quite a lot of editing work. well done! and regarding the 'ice' got popped into the bottle..well it's not ice..it's a glass sphere and that drink is called ラモネ(Ramone) aka lemonade and it's a popular drink in Japan as well..no trick or what just the bottle design..

hcvvorld, tx :) doing my best so that the reader can feel my experience. ya, my host told me that it's lemonade and like what u said, no trick :) i've being fooled! hahaha! tx for the info too!