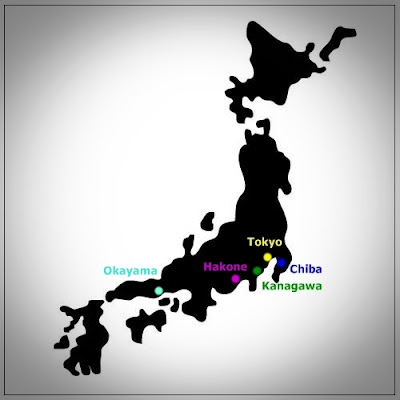 After a good sleep, we packed our things and checked out. Anyhow, we left our bagpacks at the reception, since we will be coming back to the hotel area. 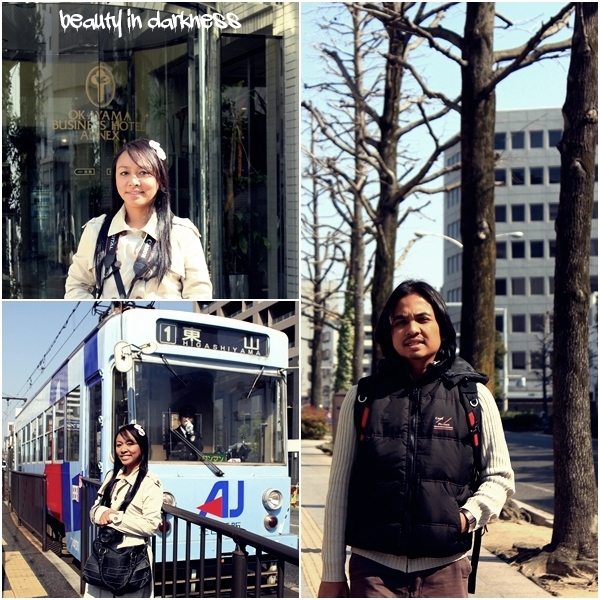 From my experience, exploring Okayama via tram and bus was easy and straightforward. They are two tram lines, Higashiyama and Sekibashi, with 100yen flat rate per ride in central area. Anyway, almost all Okayama’s attractions can be reached by foot. And looking at those daring old folks walking in the speed of “amputated cockroach” (lipas kudung) without knowing where they were heading, we felt humiliated. 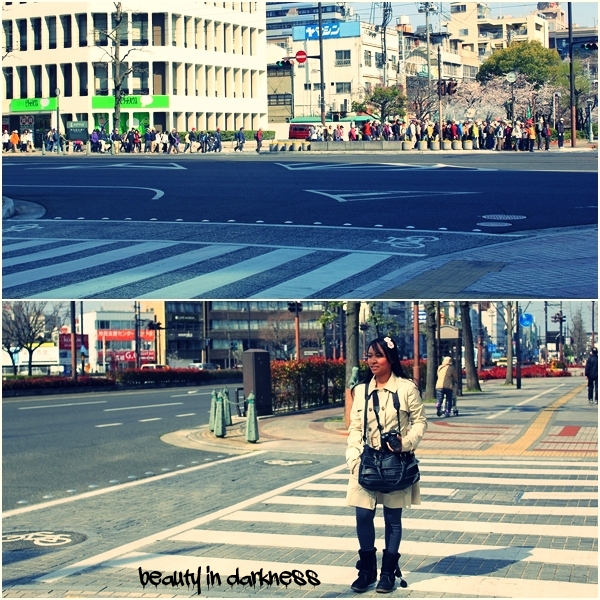 “Walking?” I looked at the tram, as if I wanted to hug it and said please take me from this crazy monster. “But we are they going?”

“To the castle, for sure! See, other directions are clear. Trust me, they are wearing hats and with group flag, sure to castle oneeeee…” Hubby fortune-telling.

With a quick glimpse on the road map, we tried to catch up with the group but being left far behind, was a totaled big slap on our face. 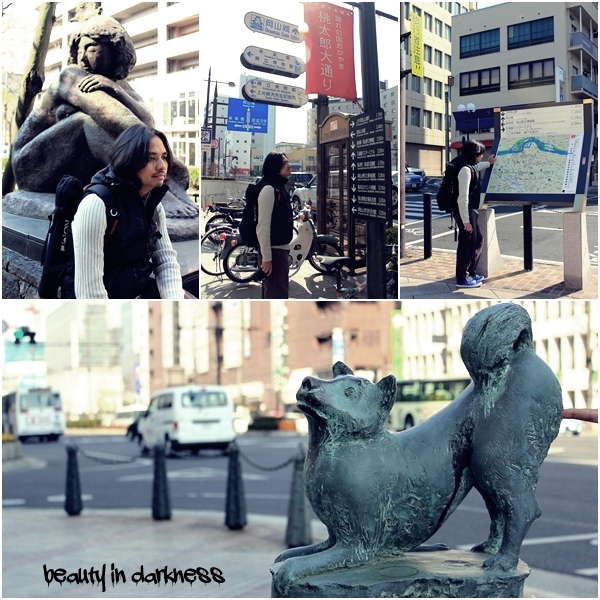 “Cannot laaaaa…Japanese walk so fast!” We surrendered and laughed.

We were lucky enough to know that we finally heading to the right direction. The first thing that caught my eyes was…naked statue? Okayyyy. And the one and only sakura tree, right before the canal, with blue canvas down below the tree. 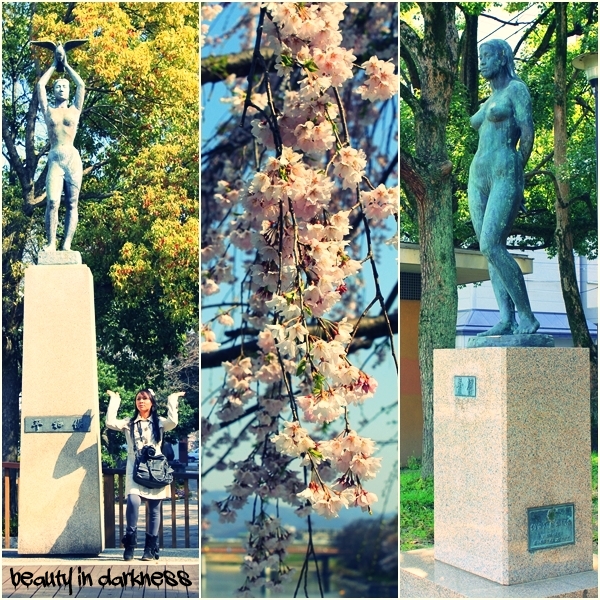 “Let’s play hanami!” I giggled and forced hubby to sit on the mat, while I set the tripod and camera.

“Eh, can sit ka?” He looked around, confirming that the canvas had no owner.

“Cannnnn…they purposely lay the mat for public. Sit! Sit!” And I clicked. 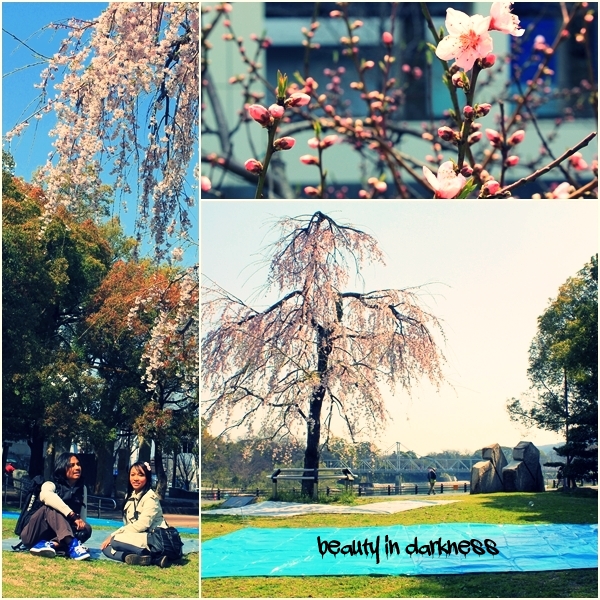 Right before us, there was one BIG garden that nothing we could see, except canal and bridge. Such a breathtaking moment, the minute we saw those tiny fresh flowers, that really looked like a fake one. 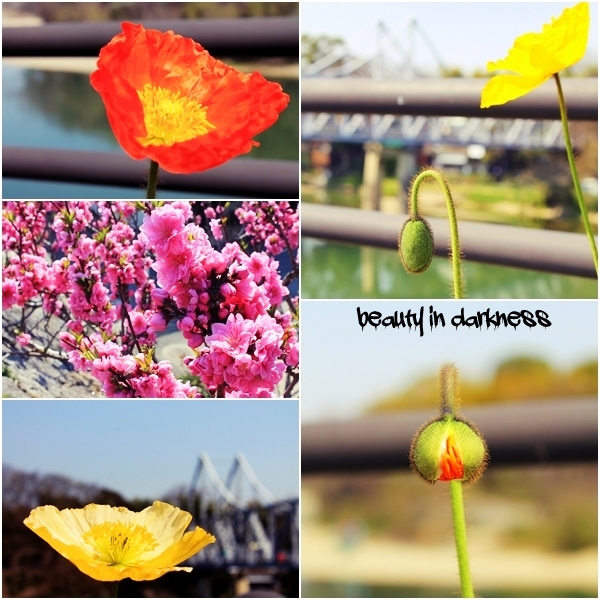 We walked further up, to ensure that we didn’t miss any exciting scene. Without a doubt, we didn’t. There was some sort of company’s outdoor activity being held, that was kayaking around the Korakuen Garden. While everyone was cheering from the bridge, we joined them and captured the event, with Okayama Castle as the backdrop. 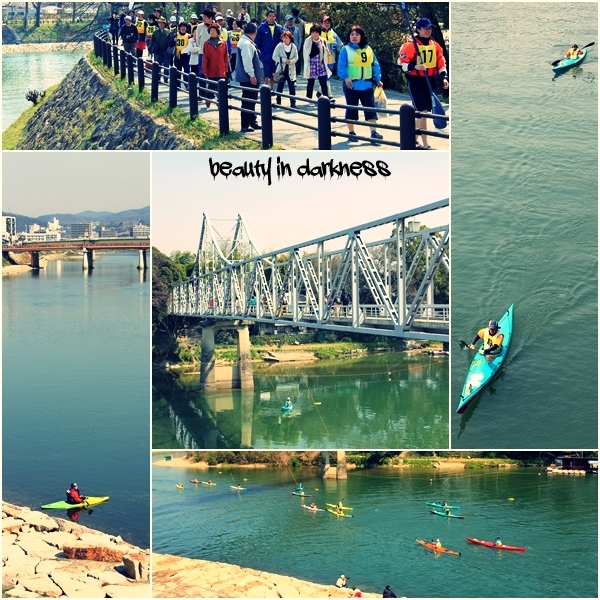 Unlike other castles around the world that were surrounded by canal for protection, Okayama Castle was built without one. It was due to its location, which quite near to Asahi River that used as a moat. This castle was built during Azuchi-Momoyama period and famously known as “crow castle” due to its black exterior. Anyhow, it was reconstructed, for the original castle was actually destroyed during WWII. 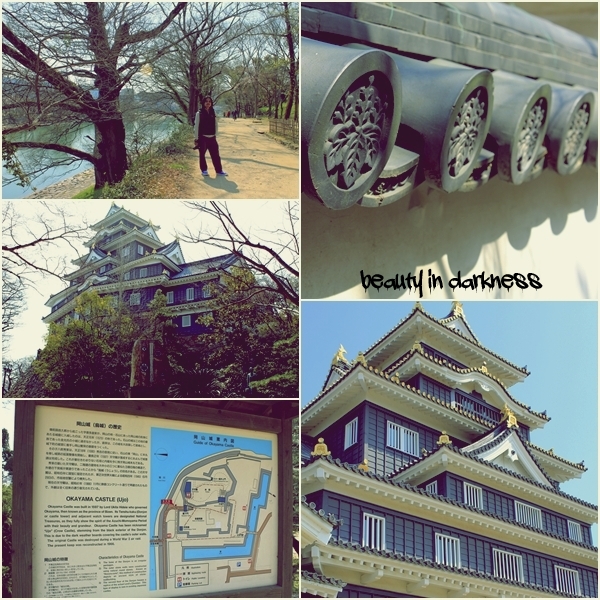 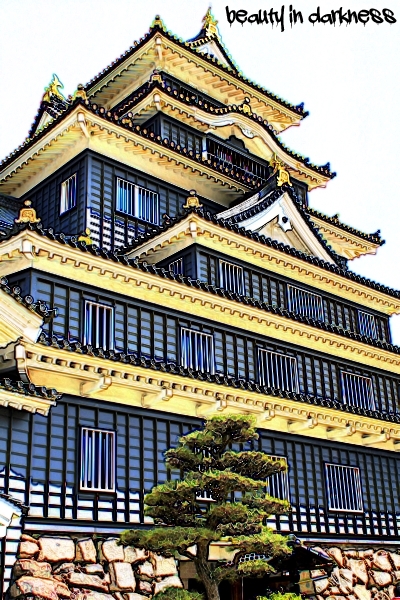 “Japan castle are all look the same, huh?” We stared at the 6 story castle keep. 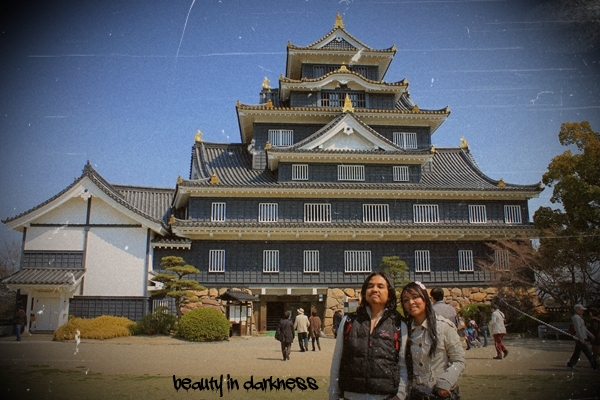 After a few self-snapped pictures, we walked back towards the bridge, entering the Korakuen  Garden. This garden was actually know as the “back” garden that was constructed as a place of entertainment for the ruling family, as well as a location for receiving important guests.

Occasionally, the public was permitted to enter the garden, till date. Yet, it is now ranked as one of the top three best landscape gardens in Japan.

The moment I stepped my foot into the garden, I had my jaw dropped! It was beautiful, gorgeous, stunning, striking, whatever adjectives you want to describe. With lines of pinkish sakura trees on the left, huge brownish grass at the front, small man-made calm ponds on the right, with Japanese house and zen-shaped lamps and semi-eyeglass wooden bridge, ahhh…SUGOIIII! 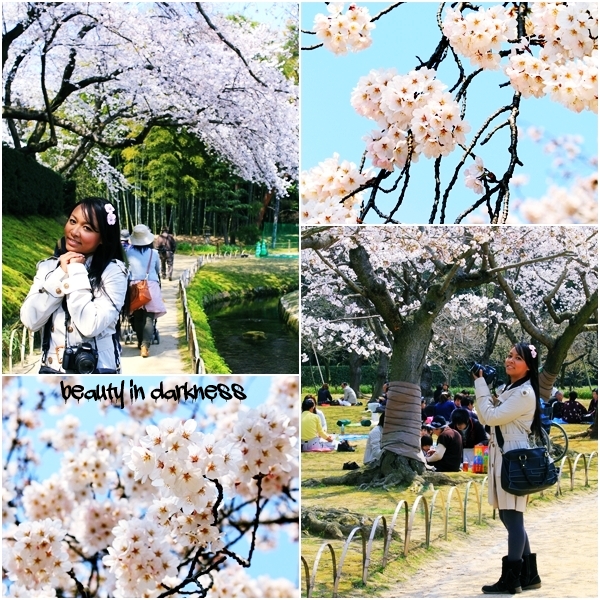 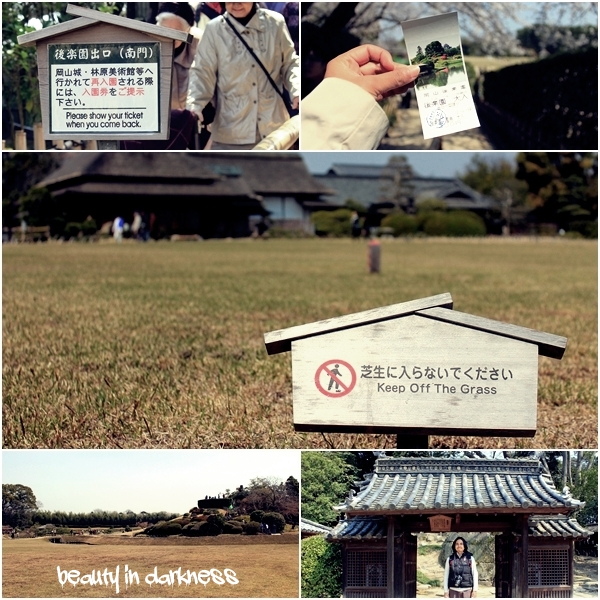 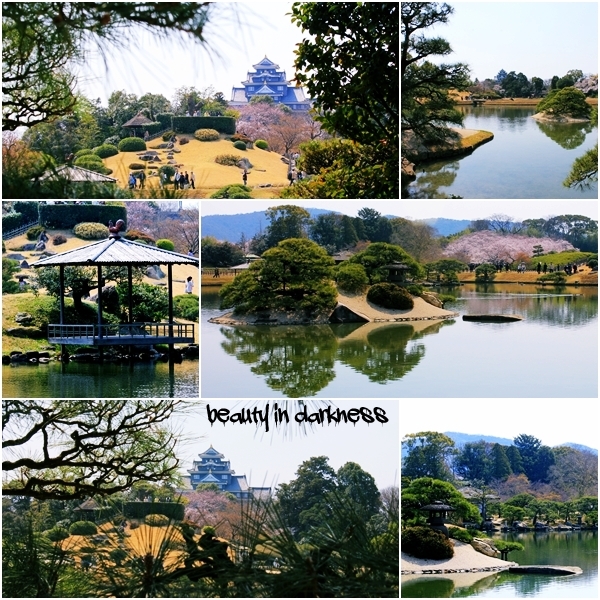 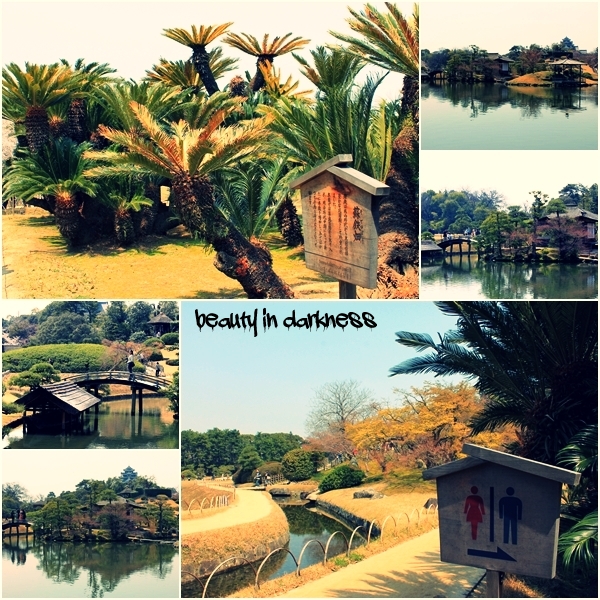 No wonder it is chosen as pre/post-wedding outdoor set! 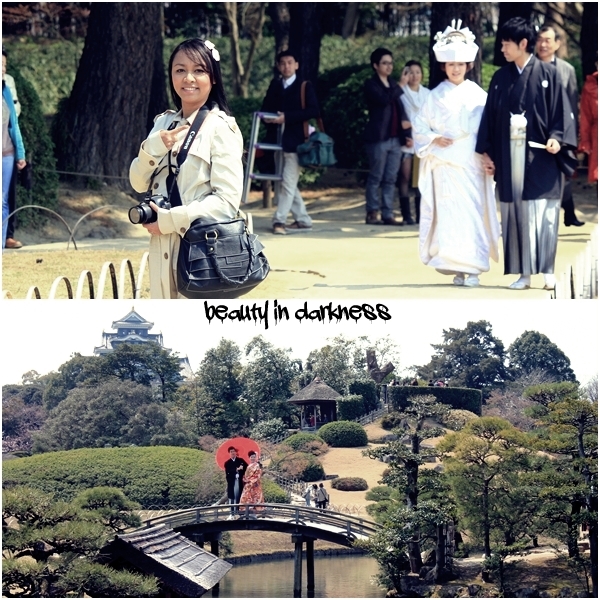 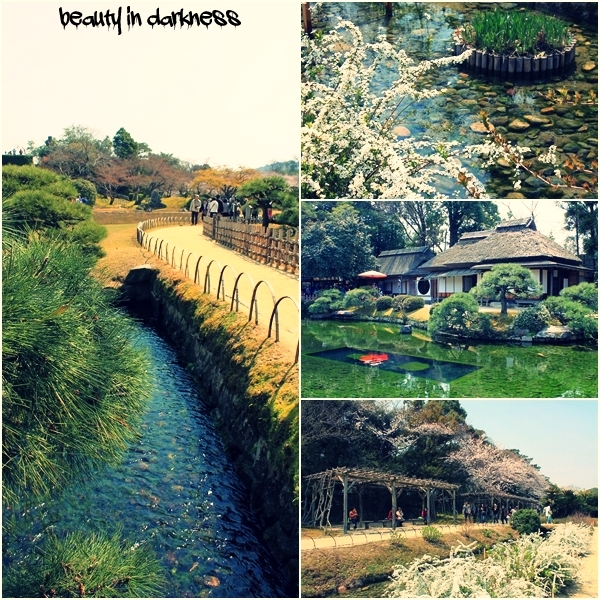 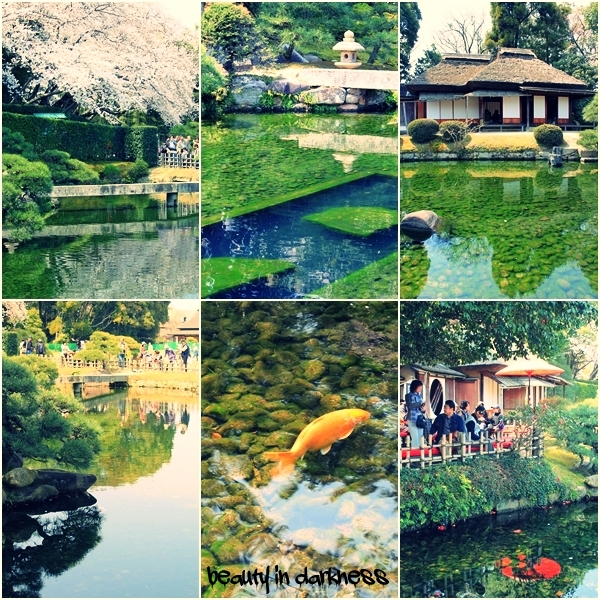 Well, funny though…we really chased and followed those bride and groom, and copied which angle the wedding photog took! Hahaha! They were sport enough to let the visitors took their pictures and not even once, they shoved us (tourist) away. 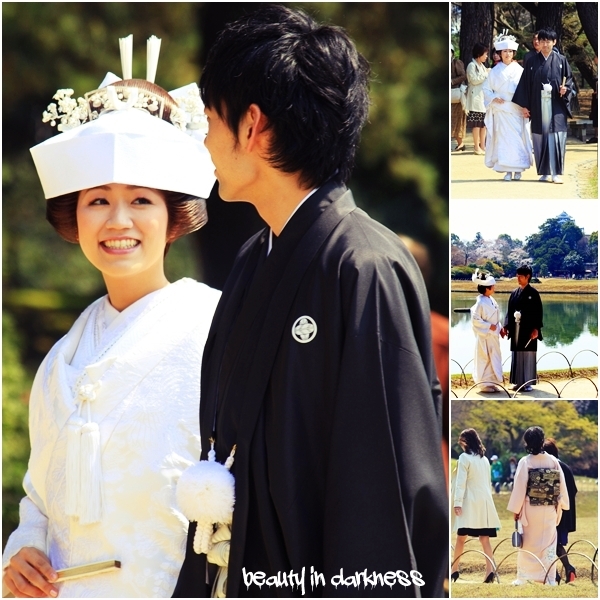 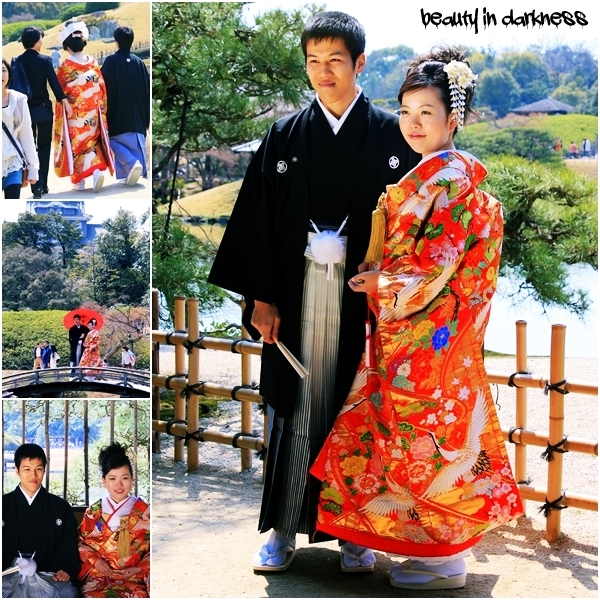 “I want to wear kimono…” I looked at hubby with kitty cat face. 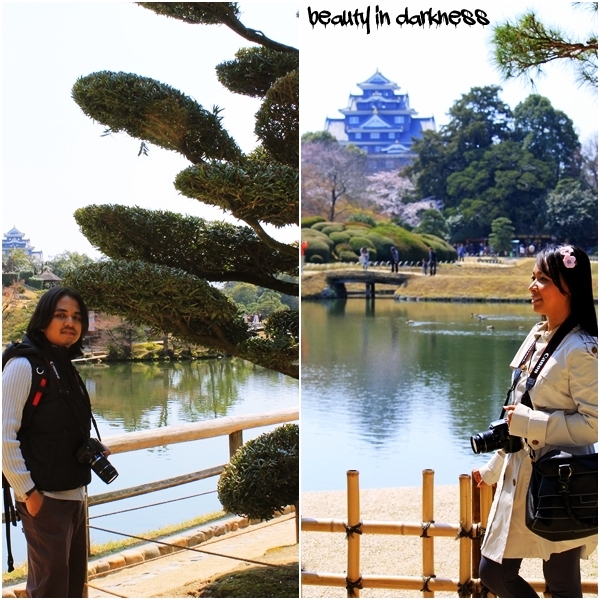 And he turned around and captured the birds, koi(s), and local souvenirs. Well, nice to meet you, Mr. Don’t Really Care. 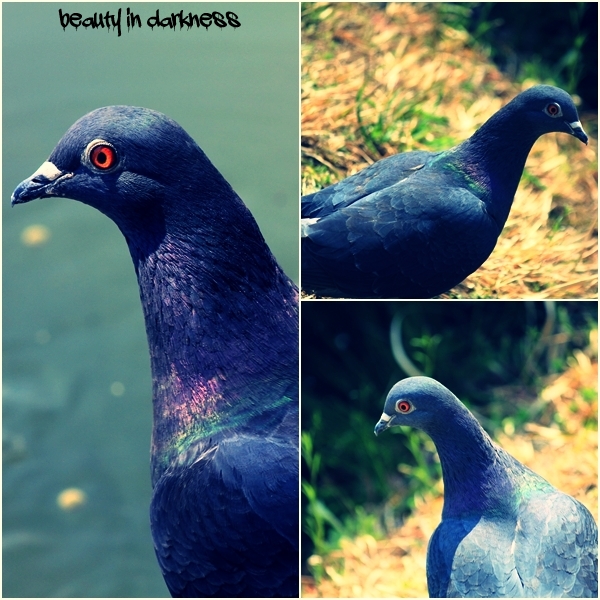 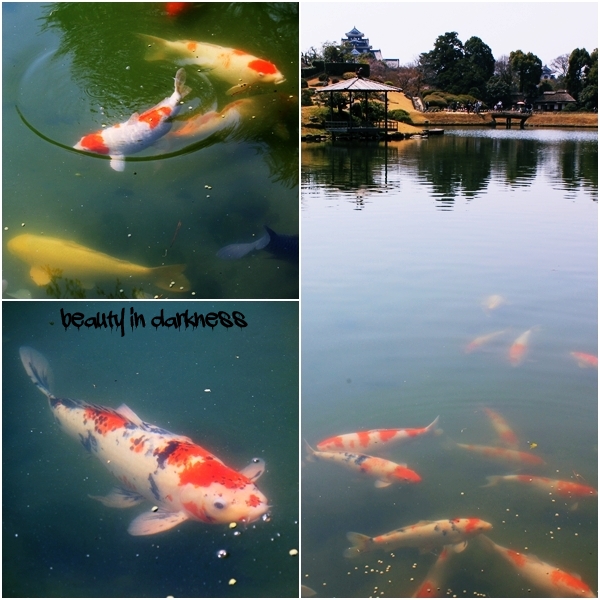 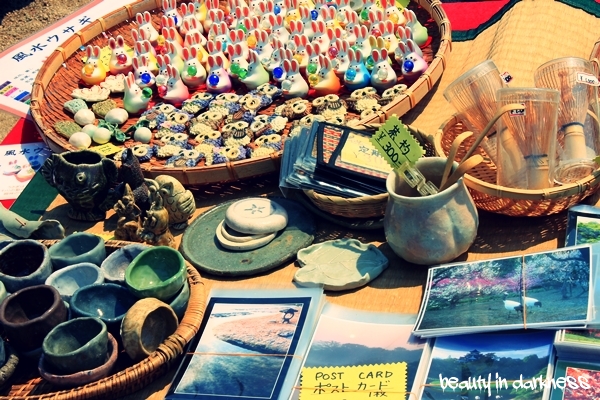 We made one big round where we ended up seeing locals enjoying hanami. BEST GILE! Either they were on leave on that day, or their company was good enough to give them the time to enjoy sakura. Dang…why we don’t have sakura here in Malaysia??? 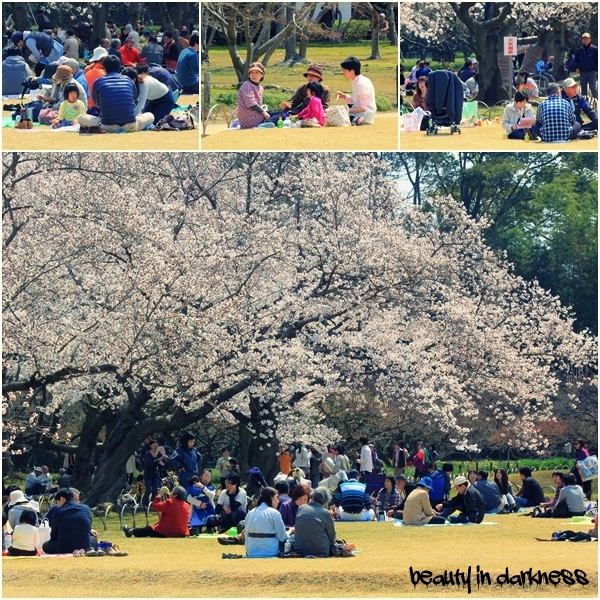 “I don’t care, I want to do like what I did in Nami Island.” I hinted hubby. 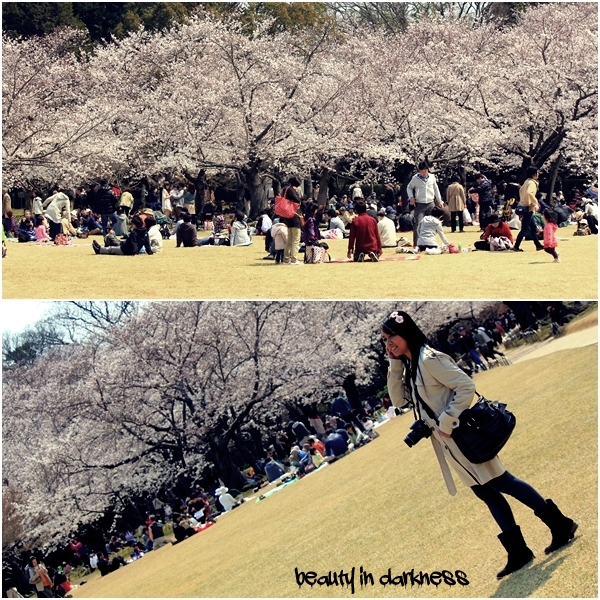 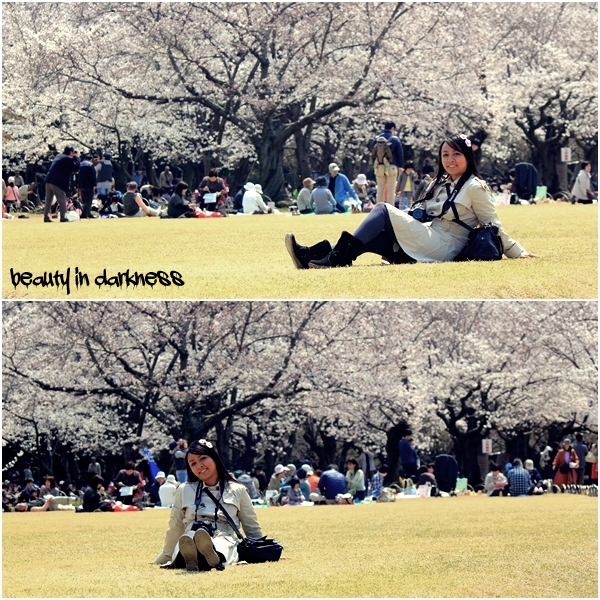 I knew that he was timid, so he asked me to walk further and he snapped from a distance. Pfft! Now I played Mrs. Don’t Really Care. Hahaha! 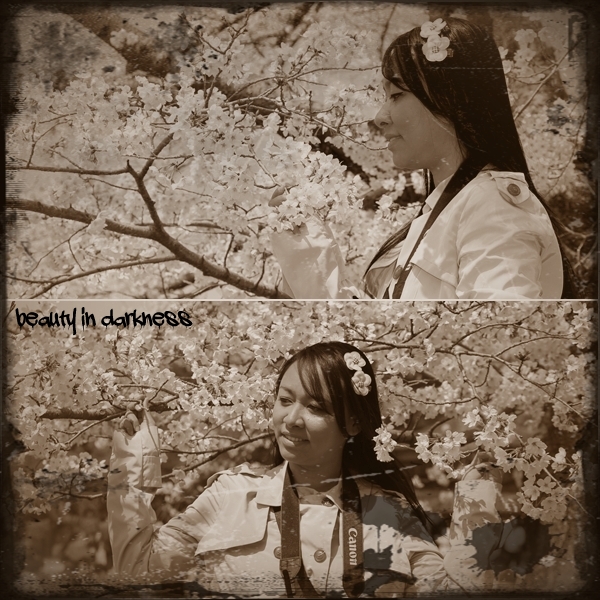 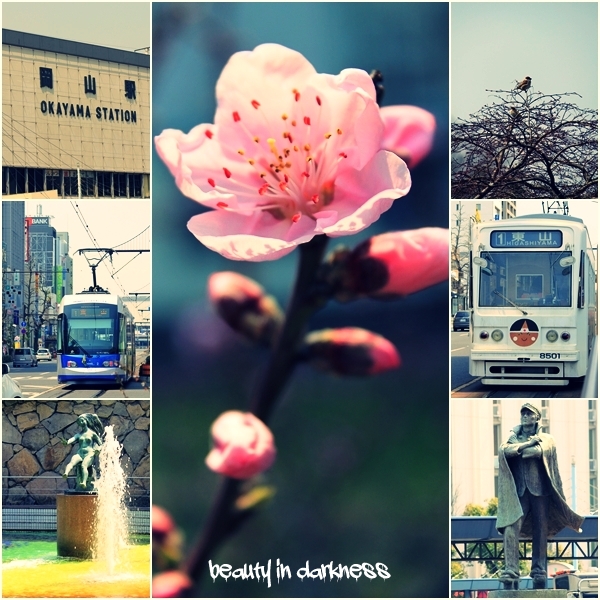 We went back to the hotel and picked up our bagpacks. From there, we took a tram ride to Okayama Station.

This is about travel n vacation, travel-japan-okayama

want cycad in my garden can aaa? amputated cockroach?????kahkahkah.......

shah, u want a cycad? show me the moneyyyyy!

As usual , all amazing photos! Biqqueeeeeeee..... Japan is so expensive, how sengkek backpacker like me can survive??? Hehehe