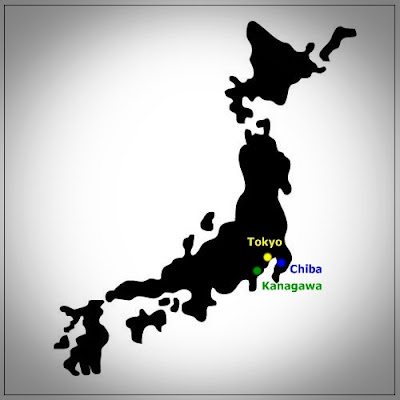 Though there are few lines going to Kamakura, we opted for JR Yokosuka Line that bound for Kurihama. It was almost an hour ride before we stopped at Ofuna, where everyone on the train off boarded. Luckily, we followed the crowd. We had to change for another train, where it finally stopped at Kamakura Station. 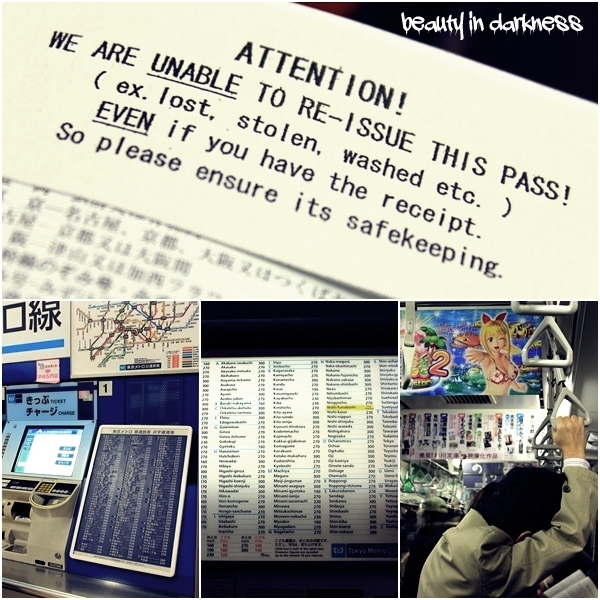 “Owh…I think, we took the rapid instead of local. That’s why it didn’t go to Kamakura.” Hubby explained.

So please remember, as I said, you have to know where you want to go, which line to take, and which train to ride. Local train stops at every station, whilst, rapid train stops only at selected station (mostly major stations).

The rain was pouring down at the moment. We quickly bought a 580yen 1-day Enoden Pass and had a quick lunch before we off for a train ride. There was another option to take, which they called a Romance Car that cost around 1210yen. After doing the math, without a doubt, we chose to ride an old model streetcar with cheap fare. Remember? I travel cheap BUT fun? Hehe!

Initially, we wanted to stop for Kamakura Daibutsu (The Great Buddha) at Kotokuin Temple but we skipped this hotspot, for it was still raining.

Cruising along the shore, houses, hills, graveyards, cars and small towns was truly amazing. From inside the train, I couldn’t stop smiling looking at a kid, recording the train while cycling. 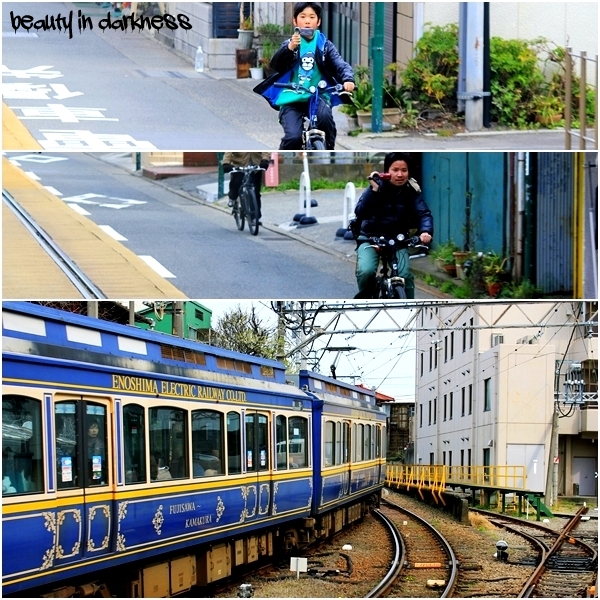 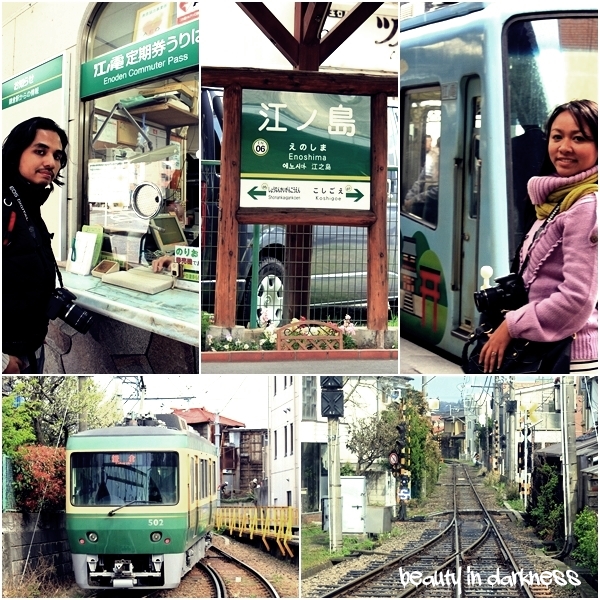 At the end of the train ride, there I saw, a small island that is connected to a bridge called Enoshima O-hashi.

We reached the station and were welcomed by a miniature collection of Enoden train and hotspots around Kanagawa. Towards the bridge, we saw hawks flying around and once in a while, flew right on top of visitors head. 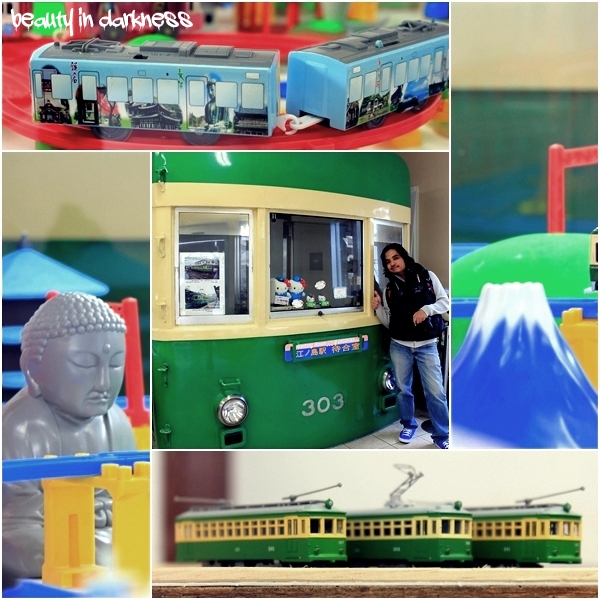 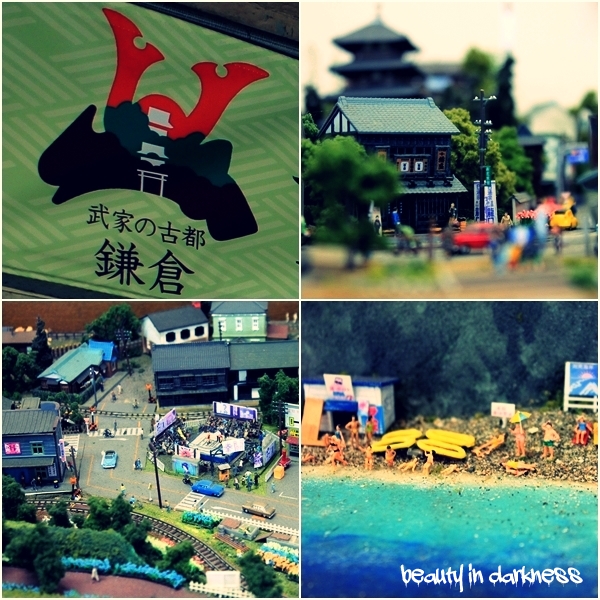 Looking at the 600 meter long bridge towards the island that protrudes into Sagami bay, we stopped for a while. 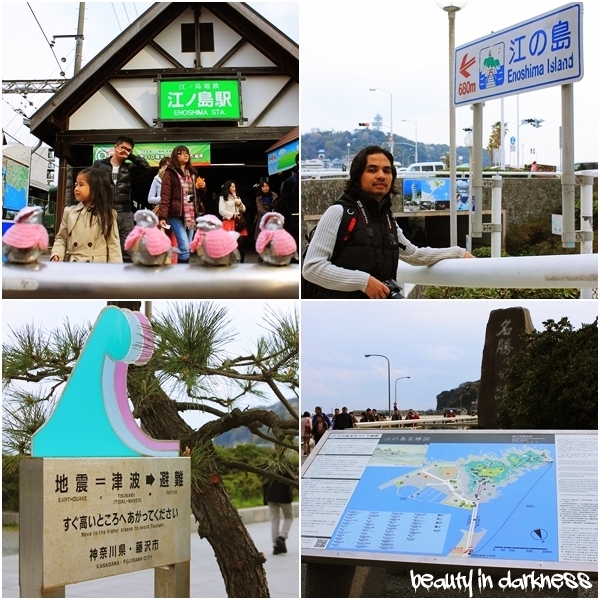 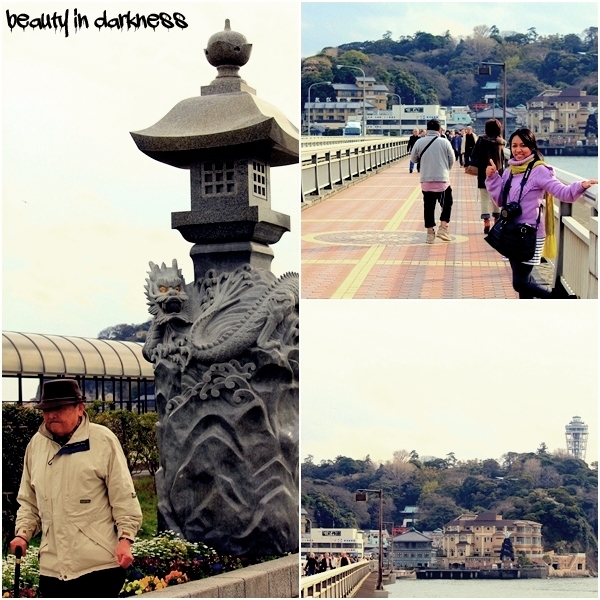 There was one big fat cat, exactly like Kiki (our cat), sitting at one corner, eating Whiskas.

“ARGH! IT’S SOOOOOOOOO FAT! IT’S BIGGER THAN KIKI!” I swear on Kiki’s name, I wanted to hug that cat till it breathes its last breath! But it ran away whenever I tried to get closer. 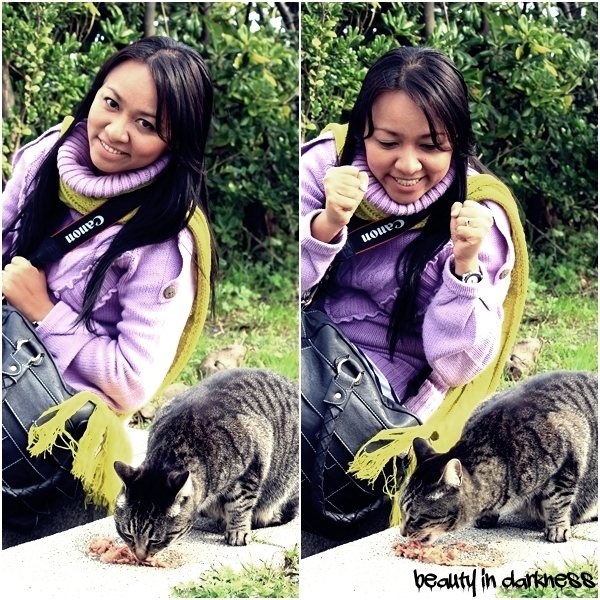 While hubby studying on the birds’ species on the info board, I asked the local who fed the cat. 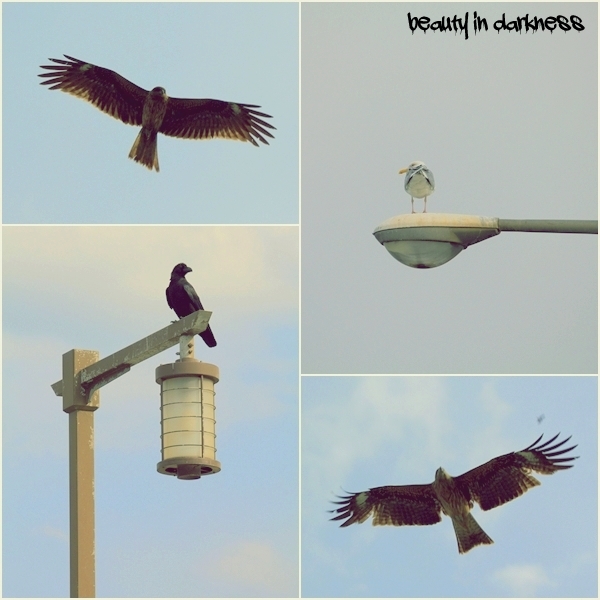 “Sumimasen…Enoshima Island…” I pointed to the island. “Ano…nekochan?” I asked whether there were more cats in the island.

It was around 2.30pm but the weather was still cloudy. We walked on the bridge, while once in a while, we stopped for taking pictures of the highest thing on the island, the Observation Light house. 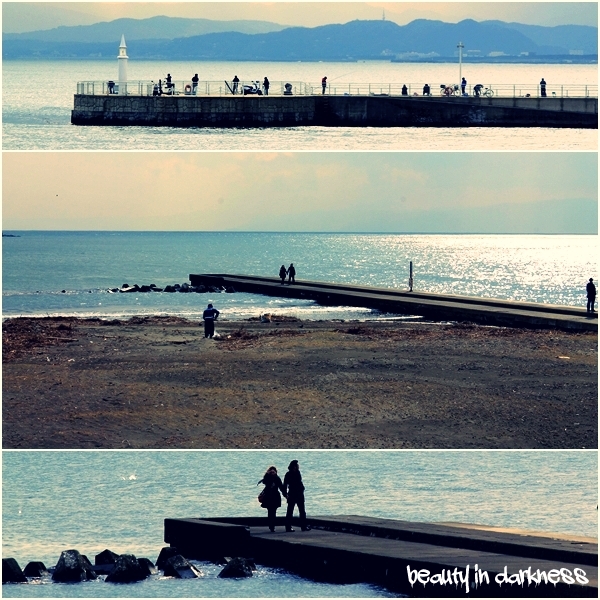 After half an hour walking on the bridge, side by side with vehicles on the other bridge, we finally reached the island. There were rows of shops selling souvenirs, local products, marine products, and there were inns and restaurants too.

Here, in this island, hubby made a record, when he posted a postcard to his mama. I was like…“Why mama?” Coz he wanted to surprise his mom! HE DIDN’T TELL HIS MOM THAT WE ARE GOING TO JAPAN! Bertuah! So he thought that it was funny to drop the bomb by posting the postcard. And till date, I don’t know what he wrote on the card. Seriously…hahaha! 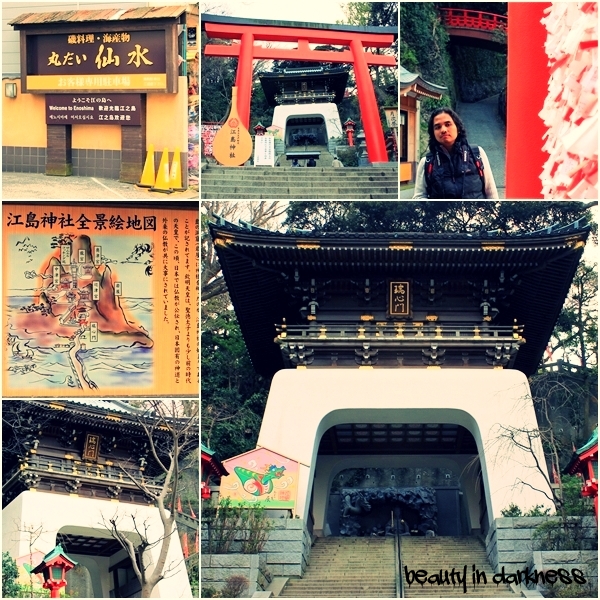 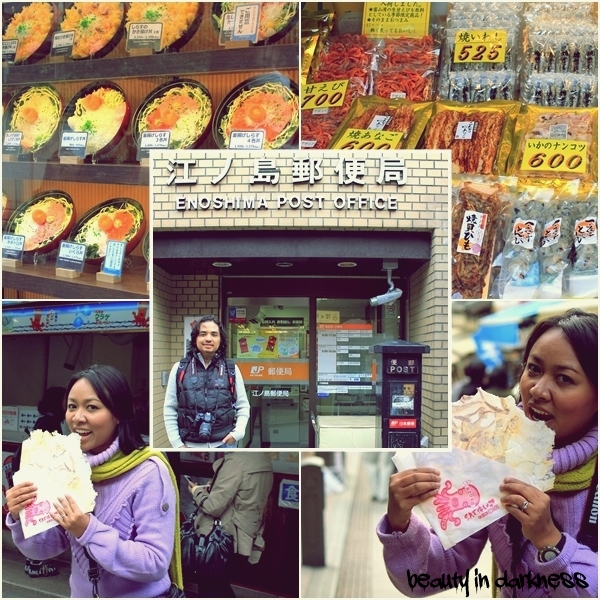 I was called to buy one octopus crepe, where they mixed the tentacles with flour, and pressed it hard till it turned into a piece of paper. UNBELIEVABLY DELICIOUS! I didn’t stop posing with the crepe right in front of the shop, and due to that, more and more people started to buy that snack! Hahaha! 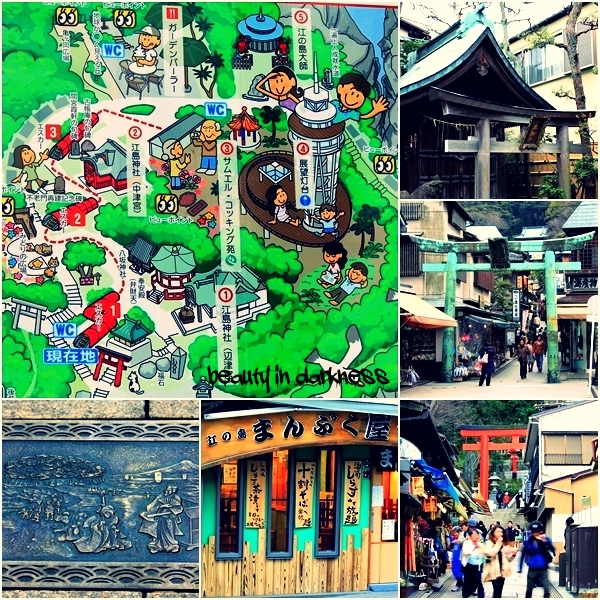 “Walk-up la like this…cheap! Wait, take photo first.” I posed in front of Enoshima Shrine. There were three separate shrines around the island. People come here to wash their money at the shrine’s pond, for Benten is known as the goddess of wealth.

“Wash money huh…? Ok. This way.” Hubby directed me to the left, into the gloomy quiet woods, where we saw one big Tori Gate with…“Graves?” 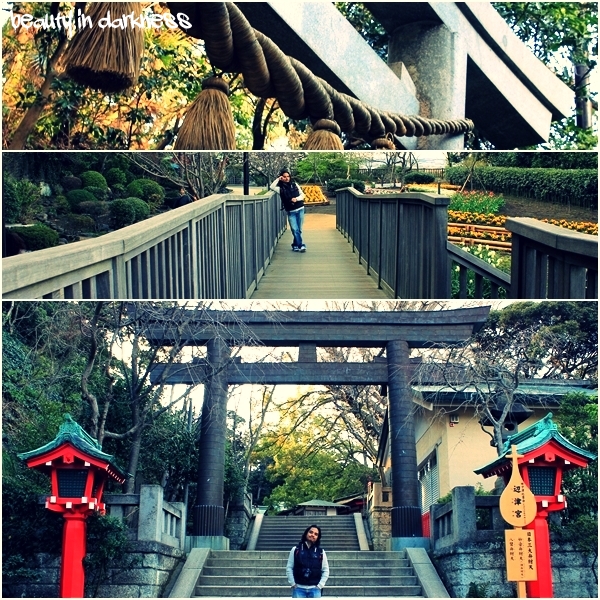 We walked even faster! Haha!

We reached one area where they planted flowers along the wooden trail. Suddenly I shouted “ANOTHER NEKOOOOOOO!” I tried to put a distance in between, scared that it would went away. But the cat seemed unbothered at all! 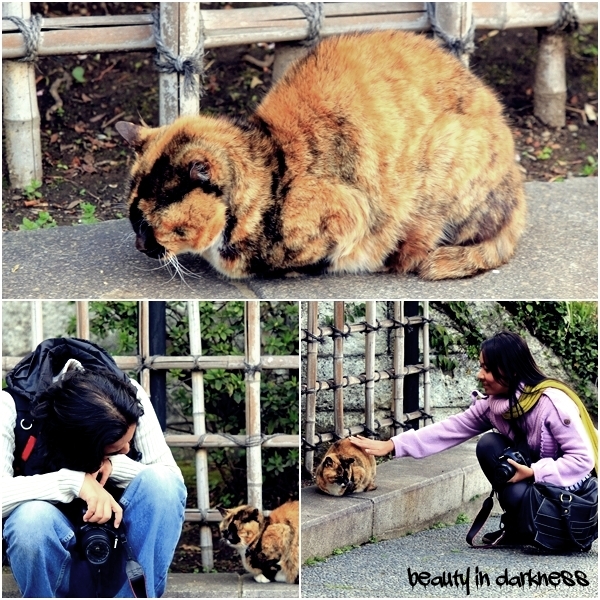 “Is it blind? Is it? No, right?” I was confused, coz it looked like sleeping but it did move. I tried to get closer and closer, tip-toeing every steps, and it still didn’t move.

“APA LAGIIII! TERUS ANGKAT PELUK CIUM ARRRR! HAHAHAHA!” I did many pose with the fat cat, and it didn’t care much. Well, it just meow-ed once! I finally left the cat alone and walked further up. The wind blew quite wild when we reached another shrine. From there, we could see a nice view of the ocean and a full view of the Shonan Port. 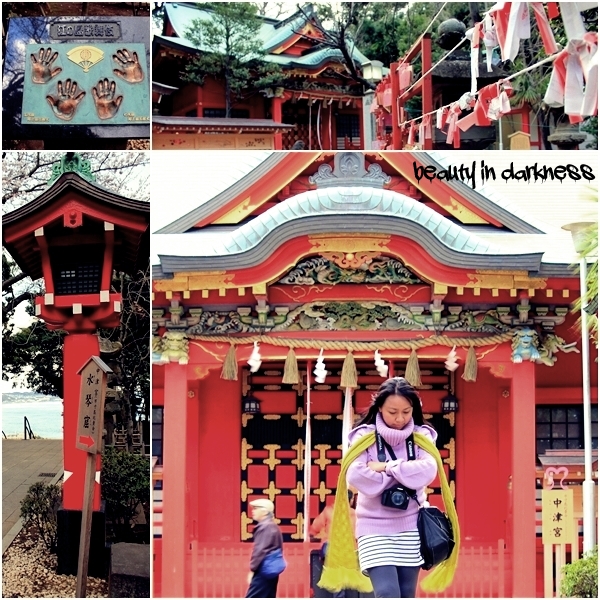 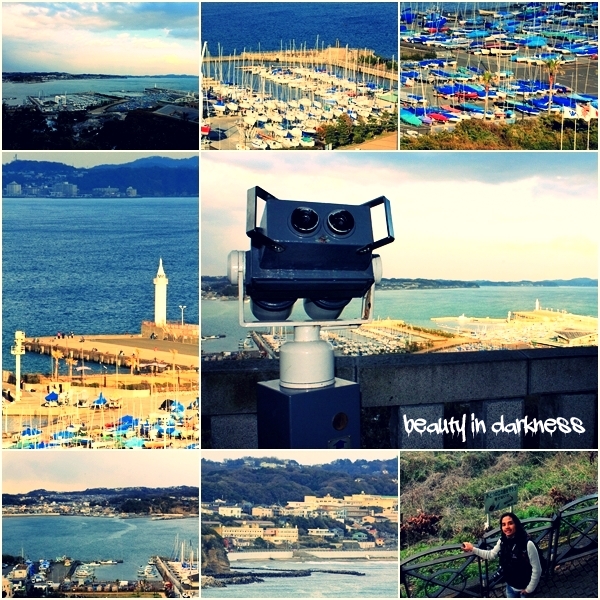 We decided to end the exploration since it was already late. If we were to continue the journey, we would have seen the famous Love Bell on top of the hill. Due to a love related legend between Benten and the dragon (dragon???), couples ring the bell together and write their names on locks, which they leave attached to the fence. Something similar in Korea and China.

On the way down, the yellow cat still at the same spot, hibernating. I pat on its back and went away. “Not many cat la today…” I was under joy-ed. Hubby told me that if I wanted to see more cats, we supposed to walk in alleyway between shops and houses to see more cats. Like “Alleycats”. But the low temperature has made the cats sleeping all day long. 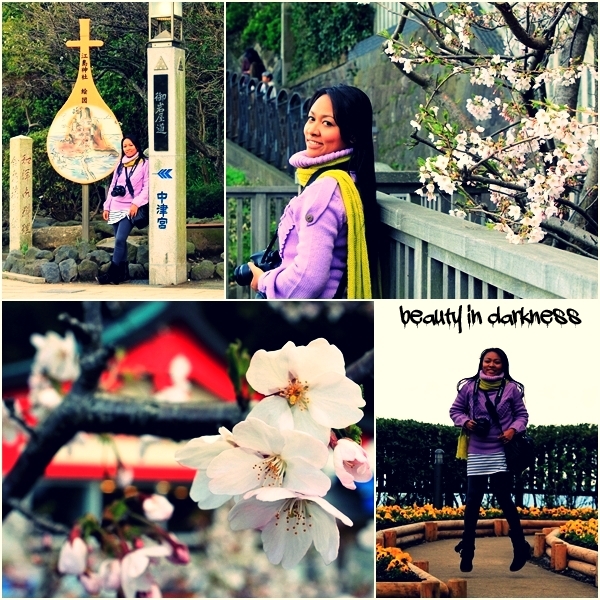 We headed to the bridge and walked towards the land. In between the cloud and dusk, there we saw the great Fujisan, as small as 10 cents. Seeing with the camera’s view finder wasn’t the same seeing with my own two eyes. Viewing Mt. Fuji can only be enjoyed on days with good visibility, so that day was not the best day though. 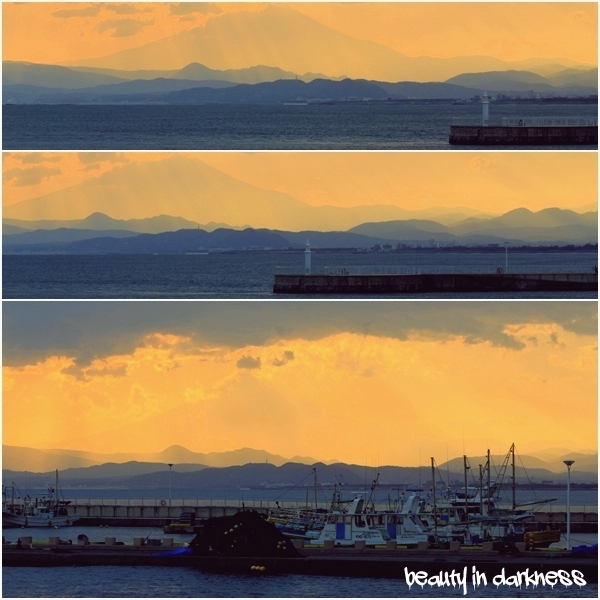 Once reached the end of the bridge, the same fat cat that looked like Kiki, also, still at the same spot. This time, I didn’t let go the chance! Click! Click! Click! Amik ko! 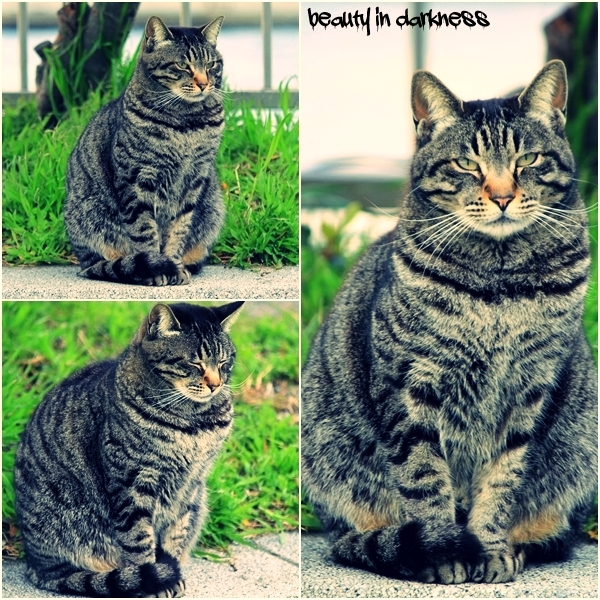 On the train, we decided to stop at one small station, where we can enjoy the waves. But there was a catch! There was graveyard behind the station! Hihihi! But who cares, hantu jepun ada kat M’sia jer. We took this opportunity to snap more pictures of Enoden classic trains but we didn’t wait long to board onto the next train. 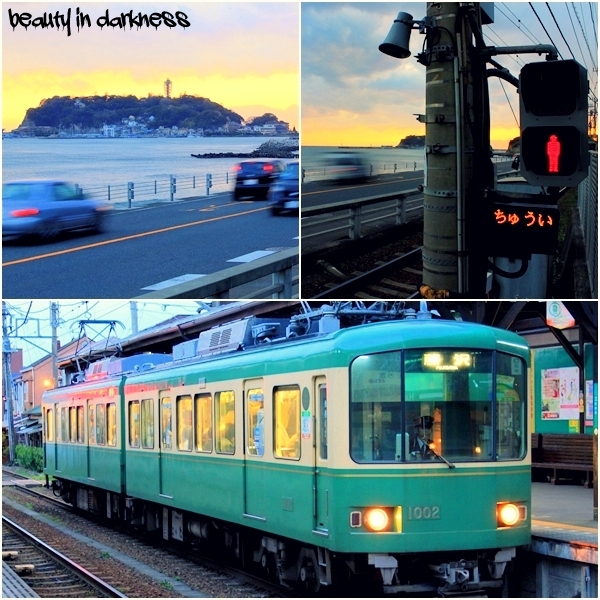 “Wanna stop for The Great Buddha?”

We stopped at Hase Station, for the statue is located only 5-10min walk.

“But it was already dark. What to see?” “Yeah…just another sitting Buddha, right?”

“Noooo…it’s the second tallest bronze statue in Japan laaaaa…” Surpassed only by the statue in Nara’s Todaiji Temple.

After 5min discussion, we decided to pass. In return, we shopped at 100yen shop! Hubby with his favorite potato chips while I got myself 4 bars of Meiji and Look chocolate. 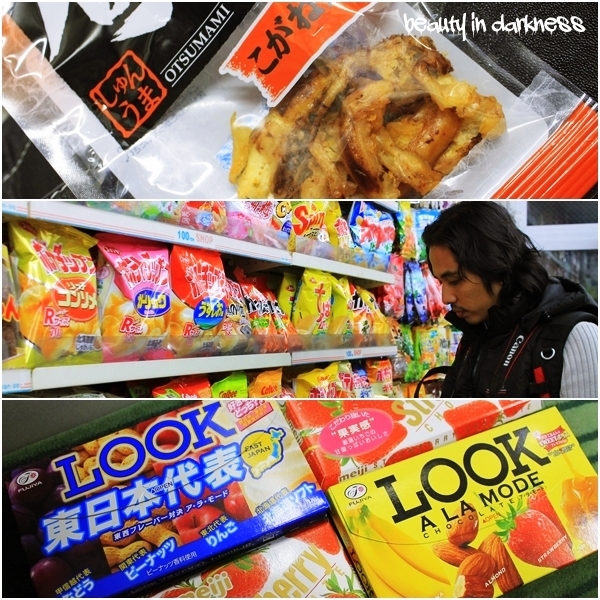 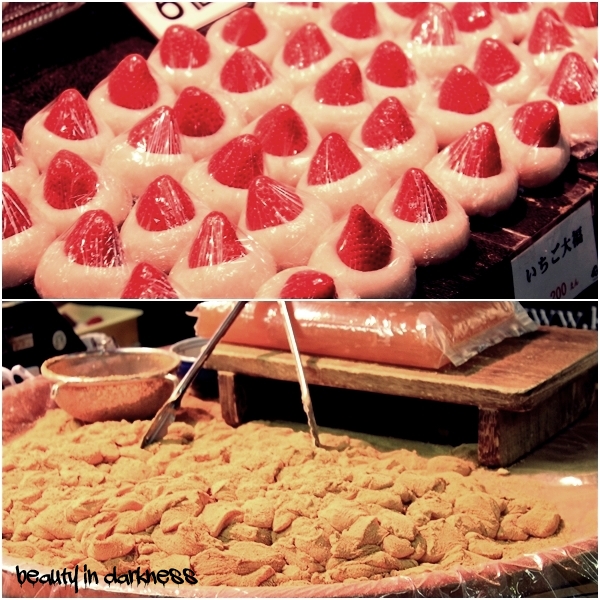 We then, went back to Gyotoku and ate at Hotto Motto (again), and had a bowl of SUPER SWEET strawberries from our host. 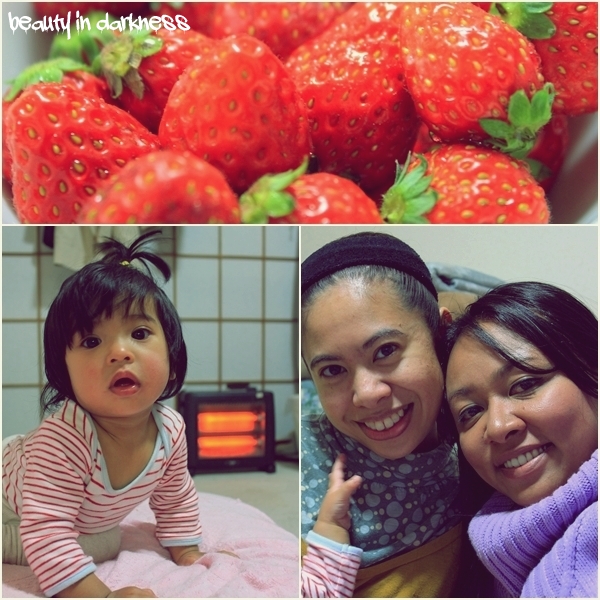 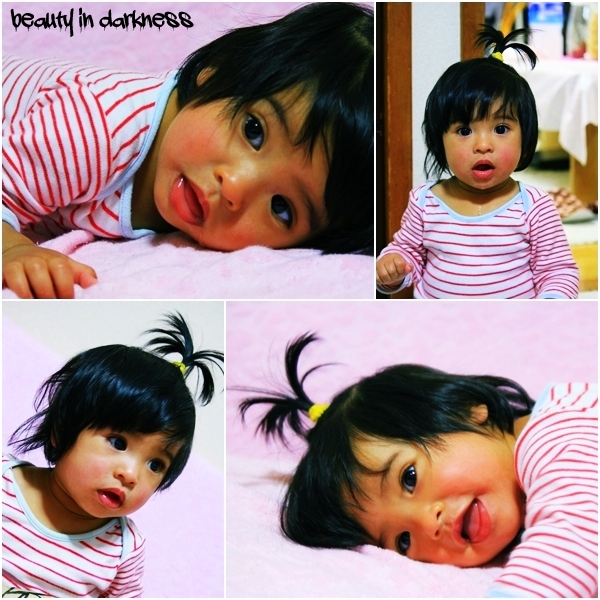 “Pray for Fujisan to show up tomorrow.” Tadah tangan berdoa…

Unbuttoned by Biqque at 9:36 AM

This is about travel n vacation, travel-japan-kanagawa

it seems that you toured like the whole Japan...and tonnes of pics from your post to see ..
Thanx for sharing

hcv, we did half part of japan downwards...hopefully, we manage to catch the upwards in the near future :)

i want to see more cats next time! :D