Hubby went off to work. I’ve decided to go out alone, just to kill time. Hubby told me that I can request for hotel shuttle to send and fetch me within 5km, just like what his colleague did yesterday. I called the reception for a confirmation,

“Hello, I need a ride to Memorial City. How’s the arrangement would be like?”

“Owh, whenever you are ready ma’am…” He replied.

So I went down to the reception and again, I asked,

And so I waited at the lobby, opposite the lounge area. I took one of the newspaper on the rack and read it. The same news appeared on the front page where the Iceland volcano eruption still ongoing. Flights still unable to take off. Passengers were stranded all over the airports. Pity them. Will insurance cover the accommodation? 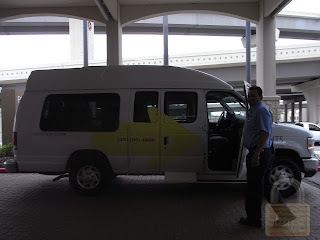 I put down the paper and follow him, off to the van. It was 12-seaters van and I was the only hotelier that he was sending to the mall. (Hmm…pray for my security!) He opened the door and I hopped onto the front seat. Buckled up the seatbelt and prayed for him to stay silent and no chit-chat over the 10minutes journey. I didn’t feel to talk to anyone now. Haha!

He dropped me at the main entrance and opened my door. What a pleasant service. I walked off and didn’t ask him to fetch me since hubby will be coming over after work.

It was 5pm and I walked into the mall. The first thing that I saw was a classic French carousel. Since I was a kid, I ADORE marry-go-round…the traditional flying horses seats…so fairytale. Thank god I still behave like someone’s wife (or else, I bet I must be jumping up and down just to be onto one of the horses!) 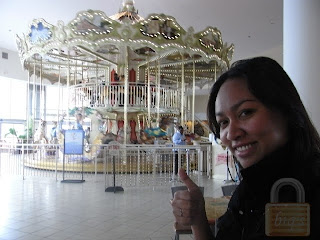 It was foodcourt area actually, where they offered same fast food like Taco Bell, KFC and MCD. I said to myself, 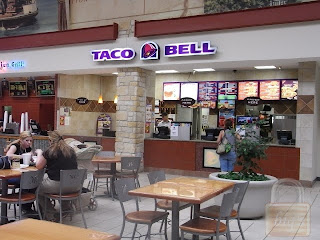 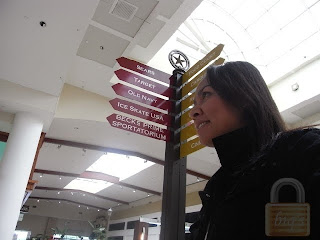 I walked straight to one of the concourse. Wondered where the hell is Texas Treasure, the one that hubby told me. (Yeah, need to get more souvenirs to bring back home. The very good-bad habit of me when traveling.)

“Excuse me, where is Texas Treasure?” I asked the black lady over the information counter.

“You walk straight pass the concourse and blablabla then turn right and blablabla you will see blablabla…Texas Treasure will be on your right.”

TOO MUCH INFORMATION! Fine! Go to hell with your southern slang and all the directions that you’ve mentioned! I’ll go and find it on my own! (Wah marah!)

With inexpensive Forever21 jacket, corduroy skirt, and gladiator wedgie, I walked towards the other concourse. I passed by few brand outlets like Victoria’s Secret, Frederick’s of Hollywood, Abercrombie, Coach, G by Guess, GAP and Aeropostale. I didn’t have a total look on these outlets, enough on what I’ve lost at Premium Outlet yesterday. 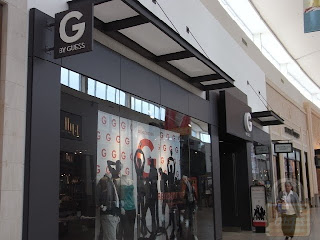 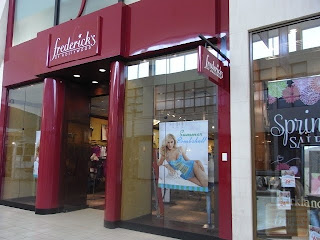 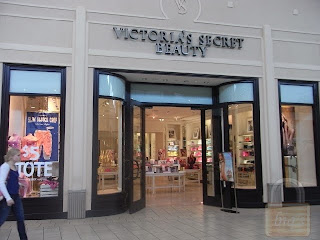 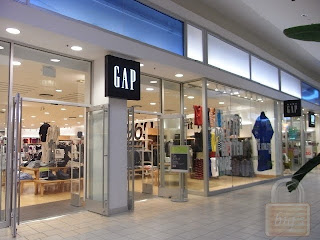 On my way to the concourse, I saw jars of colorful sweets and gummies. From afar, there was one big black antic clock, stated Memorial City, established in 1962. That’s how this mall got its name, I assumed. 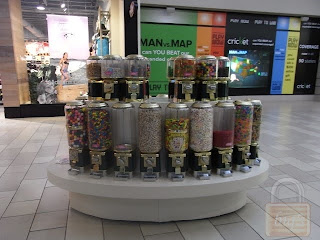 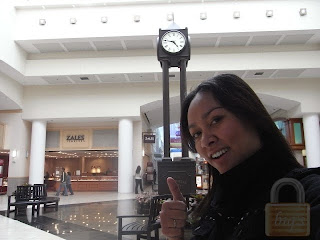 “Huiyoooo…chocolate!” I dropped my overweight jaw. This must be the chocolate factory that hubby’s friend went crazy for. I didn’t dare to go in (or else, I will have migraine for the whole week). 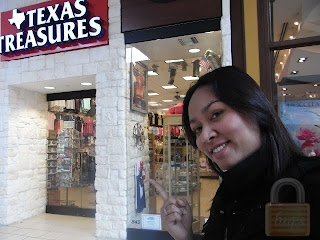 I went in and there was a brunette lady at the counter. Sour face as the welcome face? Not a very good start. I looked around the store and started to pick whatever I want.

Until 30 minutes later, I spoke.

“That one…ya, M size” I showed her the white t-shirt with Don’t Mess With Texas quote on the chest.

She took all 6 pieces and gave to me. Then I asked for adults M and L plak. Saje cari pasal.

So I walked to the other side of the store and started to look at other things. The bucket was now half empty. I checked one the M size t-shirt that she gave earlier, got a bit of smudges. SHIT! How can I get another piece from her, to replace this one?

“WHAT? WHAT’S WRONG WITH THAT ONE?” Muka dia dah menyinga.

She, however, took another piece and gave to me. YES! AKU BERJAYA! Nanti ko, laki aku datang nanti, siap ko!

I paid for all the t-shirts, fridge magnets and few other things. I went out without saying thank you to her. Lantak ko la mangkuk! 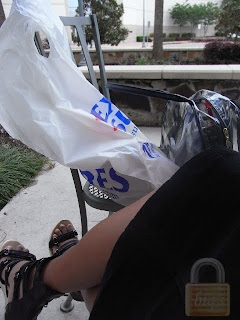 Now I lapar (dah marah baru lapar…hehe!) By the way, hubby and I had promised to meet at the carousel every 1 hour, in case we couldn’t find one another. Lucky the carousel was at the same area as the foodcourt. I waited for the third time by the carousel wooden bench, watching parents enjoyed giving their kids a continuous ride. (Macam mak pak je yang lebih-lebih nak naik). 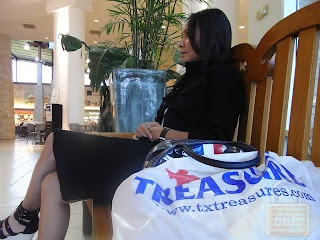 What caught my eyes was, the black ‘pengkid’ who was not really a kid. She was the carousel assistant and she had a very big Texan body size, combat hair, AND BIG BOOBS! (Wow…pengkid with big boobs…kesian, tak menjadi. Hehe!) 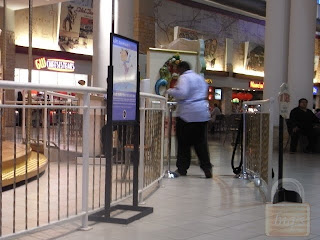 I did saw one Porsche parked IN the mall. I went closer and saw "$Enter to Win$". WOW! Cabut dan menang dapat Porshe??? Kat M'sia dapat apa??? Demak??? Hahaha! The other side of the view, got extreme outdoor game and ice-skating. 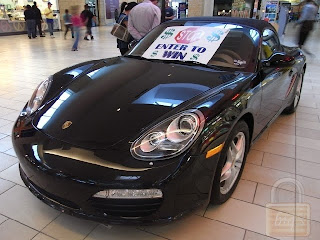 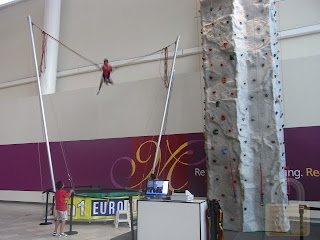 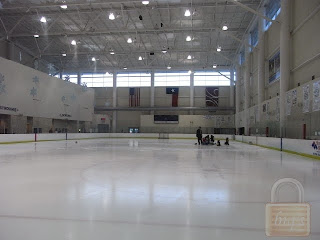 They served Japanese food and Asian food as well. Among all, there was only one stall that didn’t serve pork, Oishi Kitchen. One Chinese aunty took our order and we ate Prawn Teppanyaki along with ice tea. 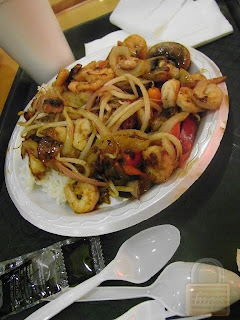 “SEDAPNYERRRRR!” I nearly popped out my eyeballs.

We continued walking towards JCPenny, Sears and Target, as hubby needs to get some chocolate for his colleague. At that point, I knew that he was looking for Rocky Mountain Chocolate Factory that I saw earlier. Yeay! 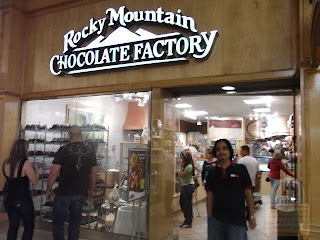 Right after we went in, hubby and I straight away looked at one side, where they displayed lots of apples, covered with chocolate and sprinkled with colorful nuts and sweets. YA ALLAH SEDAPNYER! But we didn’t get one for us…too big, sweet, and expensive! 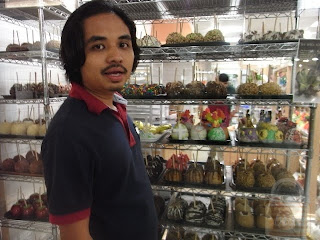 Hubby later looked for the gift set, chocolate with nuts and caramel that cost him 35usd. That’s the beauty of asking for advance when someone’s ordered from you. You know your budget range.

I dragged hubby to the store and once we entered, there was a guy helping that stupid arrogant woman. Hubby asked him to bring down one of the t-shirt from the rack and tested. He later gave hubby a new piece from the store. DAMN! This guy baik plak layan hubby! Cis!

I jelling je pompuan bedebah tu. Then we walked out from the store.

We headed to the car and drove to Walmart. Hubby wanted to buy few things there. (Me too!) I got few souvenirs to bring back home and hubby got him 2 pairs of pants and 1 t-shirt. Hamboi! Murah gile nak mampos la katakan! We also bought 1 extra bag to put in all souvenirs!

Back in hotel, I took a shower but beforehand, guess what caught my eyes? A set of towels that were made in Pakistan and ISRAEL! Huh? Two countries under the same roof? Weird... 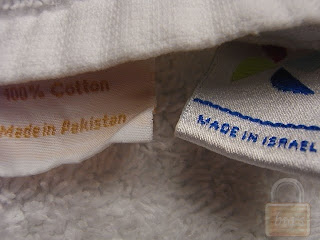 I arranged all gifts and orders, snapped few pictures, and off them go, INTO THE BAG! Night-night! 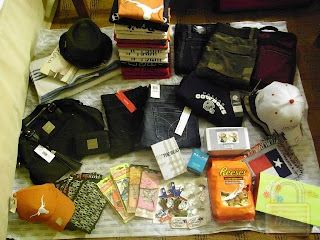 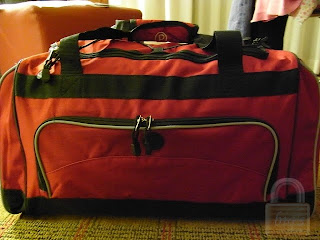 Unbuttoned by Biqque at 8:05 PM

This is about travel n vacation, travel-america-houston