Fed, The Greatest Tennis Player Of All Time

Fed won over Monflis last nite. There goes another French musketeer. Padan muka! Dah la crowd tak supportive langsung! As expected, Soderling joined him for Semi, meeting Gonzales tonite. Believe me; with the tennis he plays, he will meet Fed in Final! (Pity Rafa coz he didn’t play his tennis very well…dia cakap, if someone who has to win the game, he should be Fed, no one else. Baik kan Nadal?)

Safina, Safin’s baby sister, is defeating Cibulkova (while I’m blogging). If she wins, she’ll be meeting Stosur in Final. Hmm…what a nice opponent. You go girl!

I watched Fed’s special short documentary on Spirit of A Champion:Making of A Champion. I found it funny and yet impressed, as he has his own childhood video footage. Macam dah sangka je he will be a star! He was obsessed with balls since he knew how to walk. Soccer, ping pong, tennis, you name it. Anyhow, tennis became his no.1 passion. 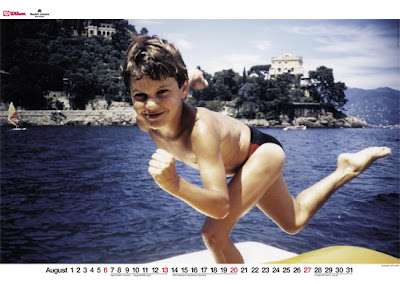 At such an early age, he was away from his parents, just to accomplish his goal. Being homesick at all the time, he started to become moody and sensitive. Smashing the racket and shouting at himself, he was dissimilar to Saffin. Hmm…unbelievable to see what he was before, compared to what he has become now. Cool-er. And he always acts relevantly upon his own fault. (Except this year, lepas kawin, jadi macam pemalas, buncit skit, and pemarah…hubby cakap, Fed terlalu memikirkan nama anak dia, bleh? Hahaha!)
Anyway, diorang memang longtime lovers. In fact, I saw his wife (at that time, still his gf) in the video, when he was 17! Mesti cinta sejati tu. Right after he won his Junior title at 16y/o, he became Pro as early as 17y/o. Masa tu dia start lawan Sampras kat Final. Wahhhhh! No wonder la dia glamour…the first yuppie yang defeated Sampras and Agassi!
Masa tu, FED SANGAT SANGAT SANGAT HANDSOME! With his hair tied, beaded choker, memang heartthrob.
(I’m melting…) 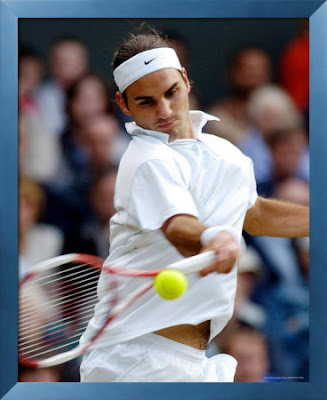 Unbuttoned by Biqque at 9:11 PM