We bought a bottle of H2O and kaya buns, and off to Kampung Ayer. It is located 5-minutes away from Jubilee Hotel! Hooyeah! This place is called Venice of the East, the biggest water village in the world with 30,000 over population. This population roughly represents 10% of the nation’s total population. They purposely reserve this place as a Malay culture and tradition. Though it looks simple and plain from the outside (more to a slum), it is said that it looks nicer and better in the inside, with satellite, air-cond, internet and what not. So don’t judge a book by its cover ya! This village also has its own school, mosque, clinics, police station, marine station, and etc. WOW!

Ok. We didn’t exactly go to Kampong Ayer to examine what they have in their house, for the boat ride was too bumpy for me. If you want, the water taxi can take the visitor on a boat ride, enjoying the village with the price of BND15. We only enjoy the village from the opposite side of it where we drove along Jalan Residency and stopped at one of the jetty. There was one local guy who was enjoying the breezy wind with fishing rod in hand. 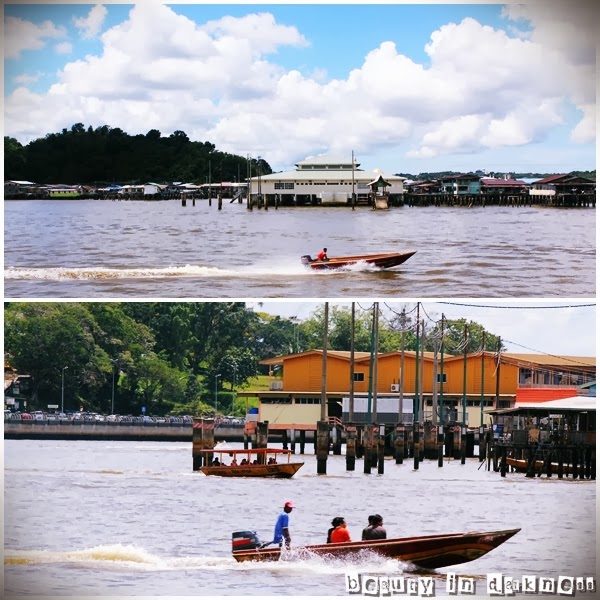 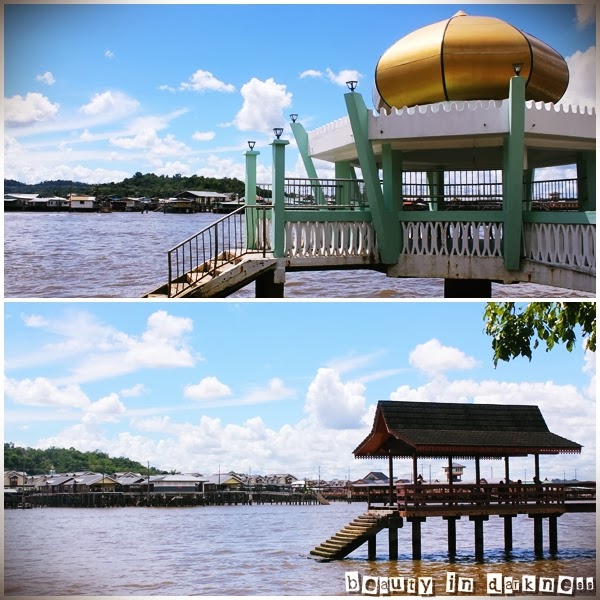 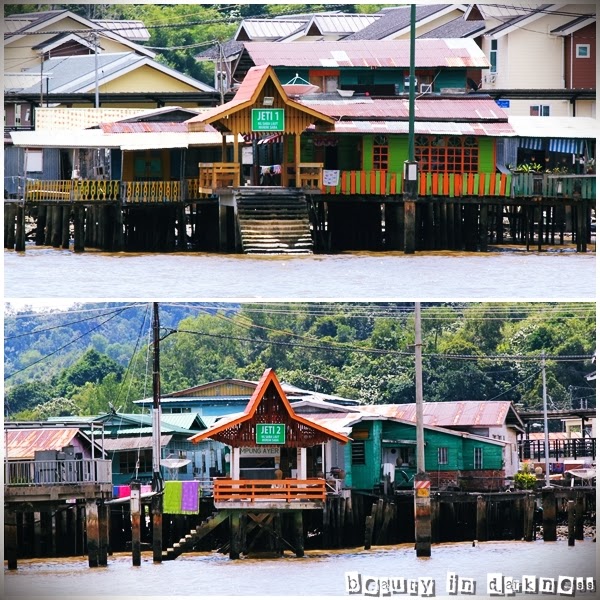 It was like a normal day with normal routine, where boats were seen here and there with locals lingering around their balcony. The water wasn’t clear and blue since it is an estuary. Nothing more, the same view that we can find in any fishing village in Malaysia. Anyhow, we were amazed with the parking area, where most of the villagers parked their cars at the other side of the water village, took a boat ride back to their crib, and it has been said that there was no case of car break-in till date. Isn’t that great?! 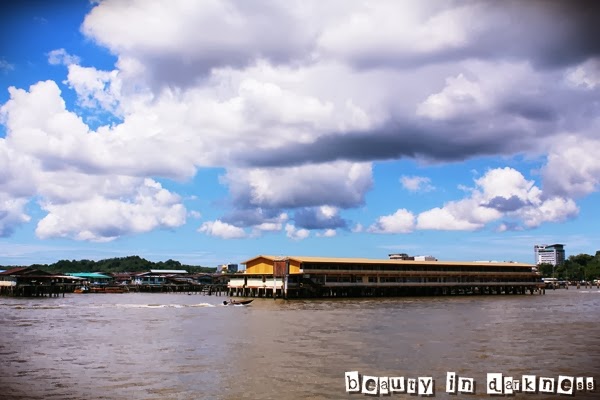 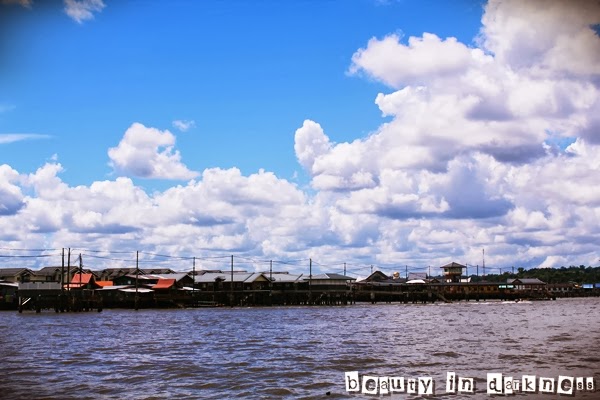 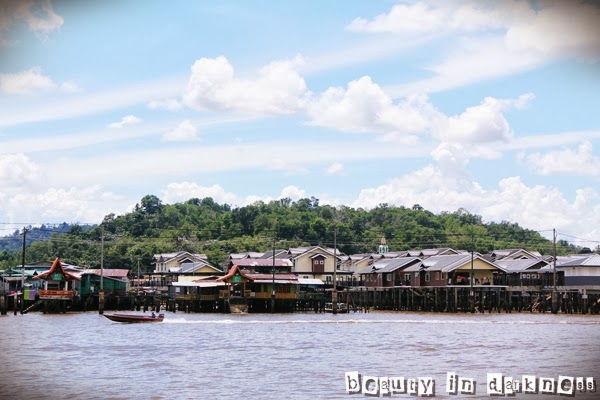 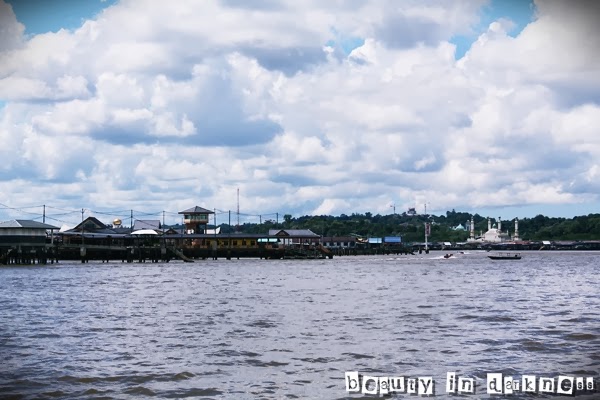 The sun was too hot that both of us had to quickly capture whatever needed. After few snaps of Kampong Ayer, we continued driving at Jalan McArthur (you may find souvenir shops along this road too), headed to the gorgeous landmark in Bandar Seri Begawan, Sultan Omar Ali Saifuddin Mosque. We had to make two rounds since we missed the entrance. We didn’t see any parking slot along the roadside, so we had to go to the back of the mosque via one government building and small village. 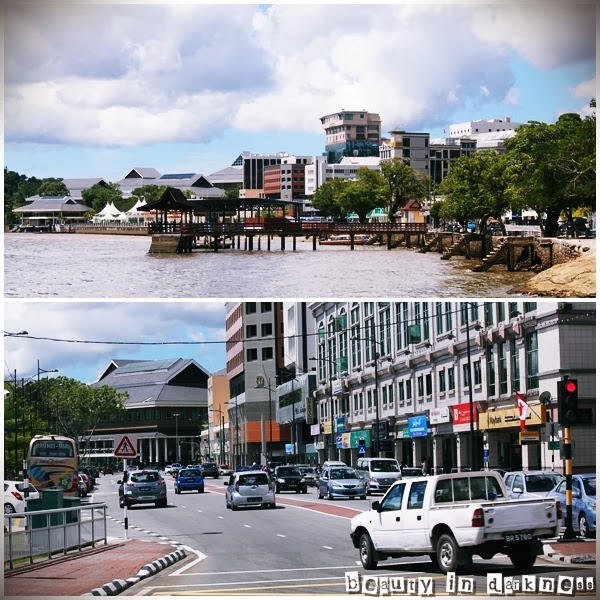 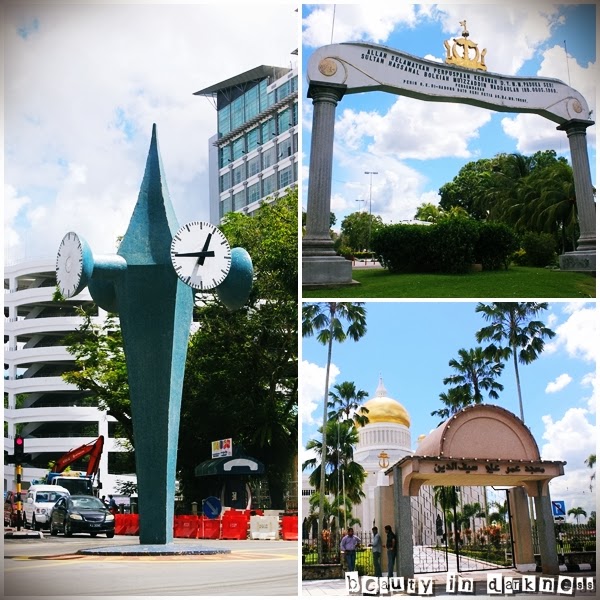 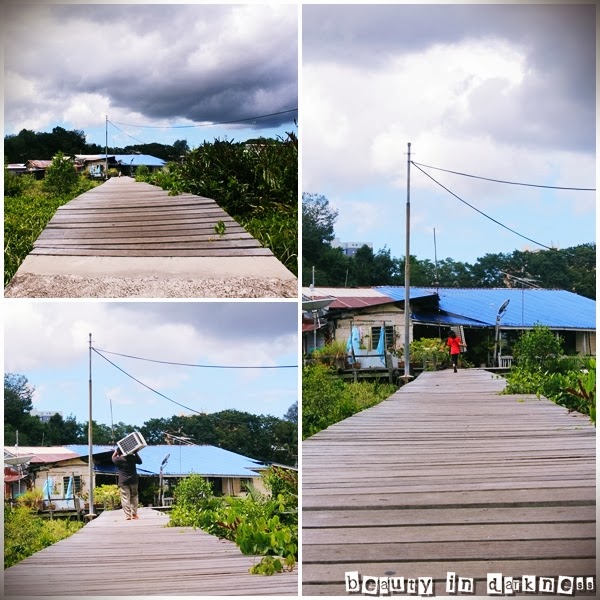 From this side of view, we actually positioned ourselves at the most perfect location, where we can cruise along the mosque outer gate. I quickly asked hubby to drive slowly along the curvy black gate, and stopped whenever I asked for. Huih penat gak la! We’ve been stopping for more than 8 spots started from the left side to the center of the mosque, where a ceremonial barge was located. There was another entrance led by a walkway. The reflection looked so marvelous with the help of scorching sun and cotton clouds. 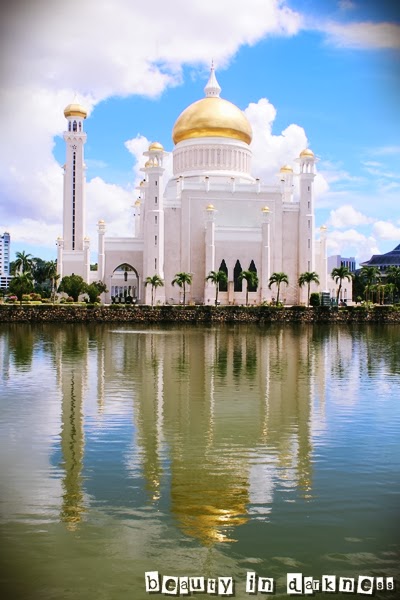 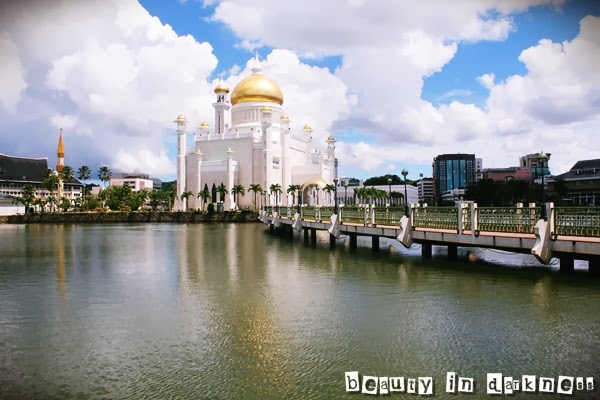 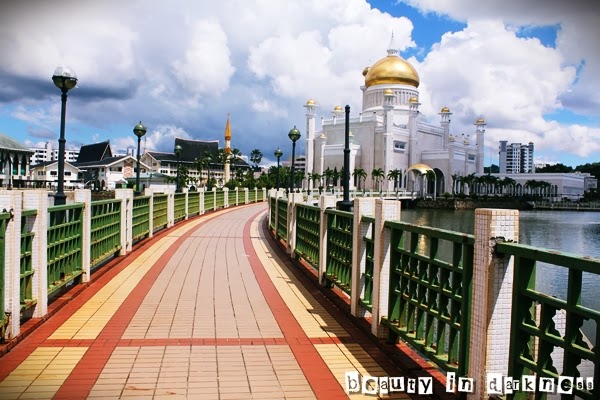 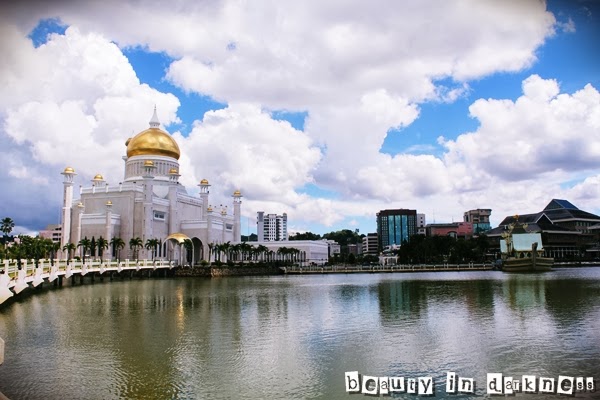 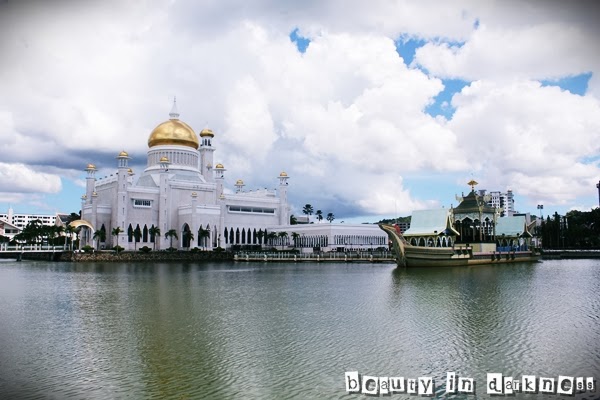 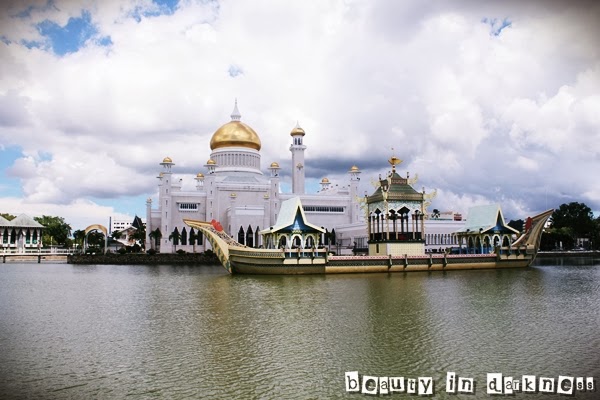 This mosque is built in 1967 with the main dome covered in pure gold. I repeat, PURE GOLD! Like other mosques, the main minaret is the tallest feature where it is equipped with elevator to the top that can view the entire city. The interior is decorated in stained glass windows, arches, domes, and marble columns, where these materials were fully imported from abroad. Nangis tak tengok dalam! 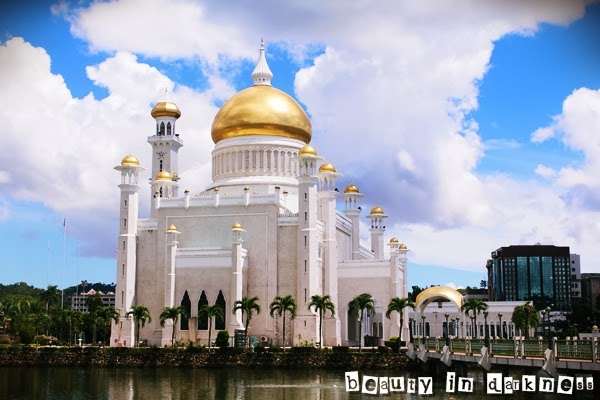 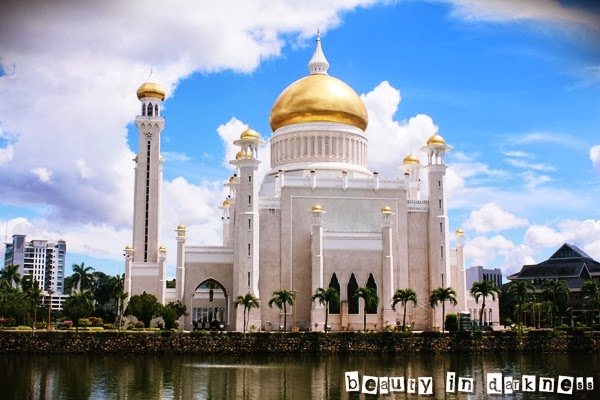 There was no exit at the end of the corner, hence we had to turn back to where we came from.

“Another mosque before we off to Kuala Belait…well, what else?” Both of us laughed. 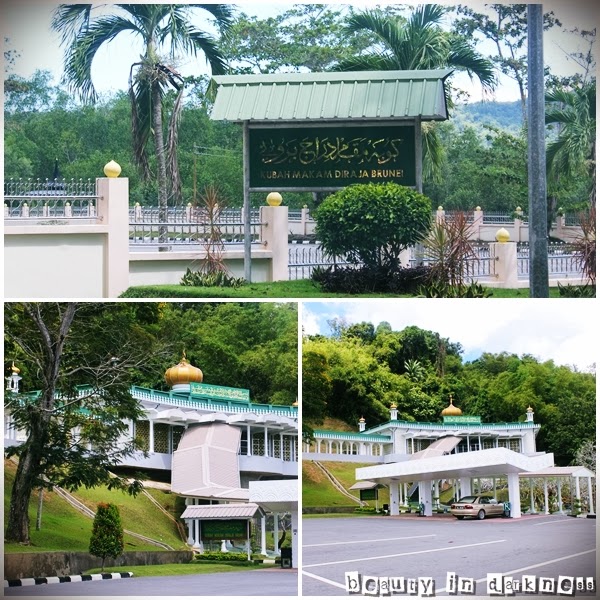 We then headed to Jame’ Asr Hassanil Bolkiah Mosque that is located at Sultan Hassanal Bolkiah Highway, Kampung Kiarong. (Note the different in spelling.) Okay! This issue has bugged me for the whole day when I was reading the road sign, and I need to ask you guys out there. Why is he naming EVERY SINGLE road and building after his name? Confuse la weh. Hahaha! If its not his name, it will be his wife’s or children’s name.

It is claimed that this mosque is the largest mosque in Brunei with four terrazzo-tiles minarets and 29 golden domes. Gold lagi! Again, we didn’t enter the mosque, for we had a very minimal and limited time since we were heading to Kuala Belait. We quickly snapped the gate pictures, the mosque, and drove away. Macam paparazzi! 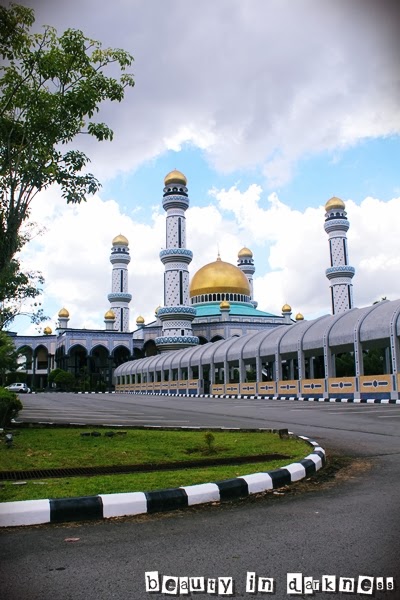 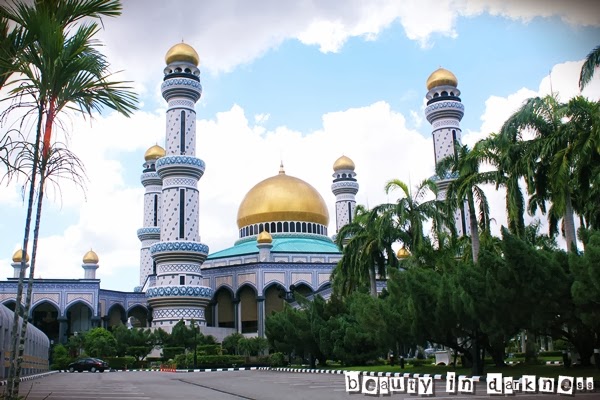 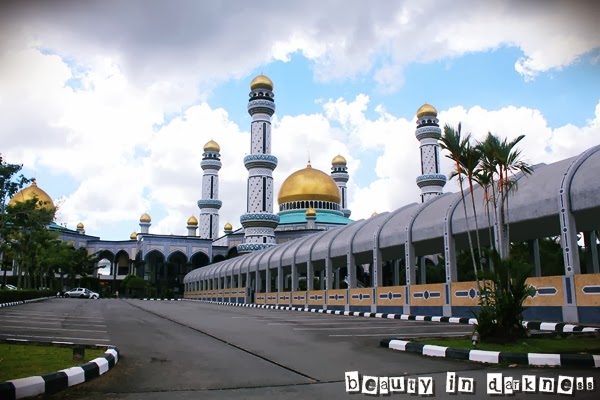 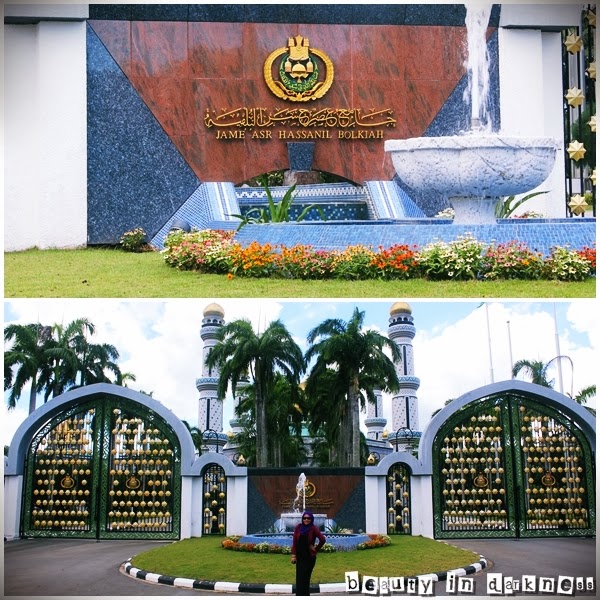 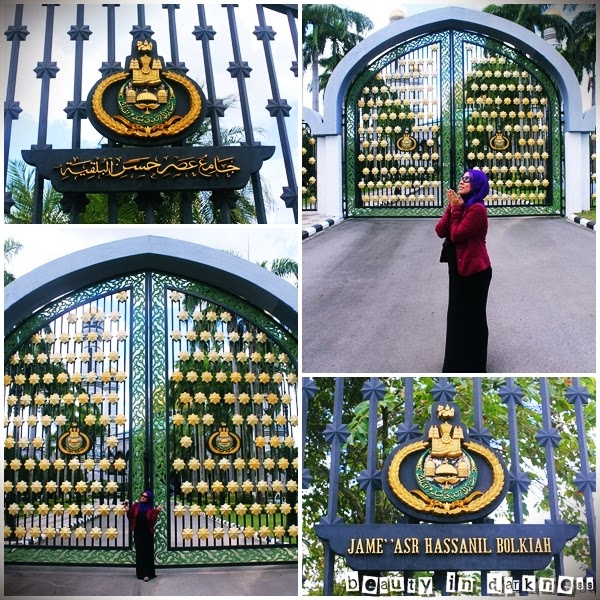 Unbuttoned by Biqque at 5:20 PM

This is about travel-brunei-bandar seri begawan

Love those gorgeous shots, Biqque! I've only been to Brunei few times, & your post certainly reminds me of my visits there.

Came over from Diana Diane Teo's blog. Congrats on being the top commenter! I'm following you at Twitter (blackswanst) & would love to have you follow me too. Happy 2014, & looking fwd to sharing!

Hello there, we recently found your blog and enjoyed reading it. Since we recently started blogging, we've been looking for other Malaysian bloggers with similar interest with us. Hope you would drop by our blog Happy Campers Walkabout so we can share our travel journeys with you. On behalf of Happy Campers Walkabout team we wish you all the best and keep those travel posts coming.

shirley, tx for following, ya i noticed u in my twitter list :) we knew diana virtually but have not yet to meet her...