This trip was unplanned. We just had a glimpse of air ticket prices two days before, with no specific destination on mind. We clicked almost all SEA destinations and found that Brunei had the cheapest air fare among all. Anyhow, two days after, the return ticket was up strike that made us turned to AirAsiaGo.com for flight + hotel.  Still, the total amount was pretty handsome, but who cares, I NEED A VACATION! Pfft!

I quickly started the Trip Cookbook with not-so-santai itinerary to cover the whole Brunei in just one and a half days! Proud to declare that this time, the itinerary was done by yours truly. Hehehe!

Both of us worked late on Friday and luckily, we’ll be flying off on Sunday. The only drawback was the flight time…6.45am! So we had one solid day to do all the preparation, including preparing the breakfast for Sunday, for we will be taking the first train and bus to LCCT. We woke up at 3.00am, went out at 3.45am, took ERL and bus at 4.20am, and reached LCCT at 5.00am.

Ok, listen. This is the boiling point where I turned to be a very VERY emotional pregger! We have never, EVER, done any counter check-in for all trips. We have never, purchased any baggage by this far. Everything was simple, web check-in, carry-in, and off we go.

ANYHOW, with no flying experience while pregnant, I bluntly followed what was stated on AirAsia website, where pregnant lady is needed to do counter check-in. So I quickly walked towards the assigned counter, but the officer directed me to another available counter, where that available counter was not yet in operation! AND the queue was SUPER LONG! I looked around and started to join the crowd, complaining on the situation.

I cannot tahan anymore lah kan. I went straight to the officer and hit my luck. I told her that I just need to print my boarding pass and pregnant lady can’t do so via the web! Guess what she told me? “Owh…actually can…you just need to clarify the document at the counter jerrrrrr”. Honestly, I felt like slapping her forehead! HEY, THEN PUT IN ON YOUR WEBSITE LA DEY!

She instructed me to print it via kiosk, and I had to run over the other side of the section to get it printed! The second level of boiling point then, HIT! The option ONLY allowed me to print the return ticket (from Brunei). ARGHHHH! So I ran back to the counter section and queued! By this time, I was on FULL FORCE of showing my bump to the liners! (Thank you baby!) They allowed me to go first and I quickly repeated the whole story, again! Guess what she said? “You are late and that is why the system didn’t allow you to do so.”

Uuuuuuuuuuuuuuuuuuu…NEVER, EVER, mess with emotional pregger! “I’ve been here since 5.00am, the counter was closed and the backup counter was not yet operated, and the officer asked me to print via kiosk, I ran back and forth, and now you telling me that I AM THE ONE WHO IS NOT ON TIME???”

And she handed me the boarding pass.

Hubby then said “Next time, we just do web check-in. Jom blah!” We sat at one corner and had our tapau breakfast (rice with fried chicken and petai, with vitagens) that hubby cooked the night before. Erkkkk alhamdulillah. We threw the containers and walked towards the check point and passed by the check-in officer, immigration, and scanner, with FLYING COLORS! NO one noticed that I am 5 months pregnant and NO one asked for my gynea’s letter!

Owh wait…wait till I blog about what happened during the return! DRAMA CONTINUES!

We boarded the 2 hour-journey flight and reached Bandar Seri Begawan, Brunei around 9.05am. The Brunei International Airport looked pretty new with half part of it was still under construction. We walked to the arrival hall and looked for our pick-up of the day (free airport transfer by Jubilee Hotel), but neither sign of my name nor the hotel name was displayed. Hmmm…he could be late, I whispered internally. 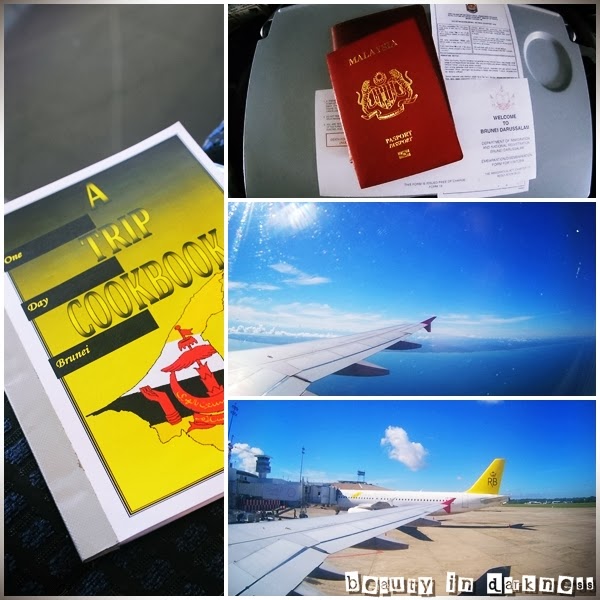 It was half an hour past 9.00am and no one left except two tour agencies who waited for their tour group. We decided to walk out from the arrival hall and looked for the guy. We then went up to the departure hall but still, no sign of a pick-up guy. We walked back to the arrival hall and sat on the bench. 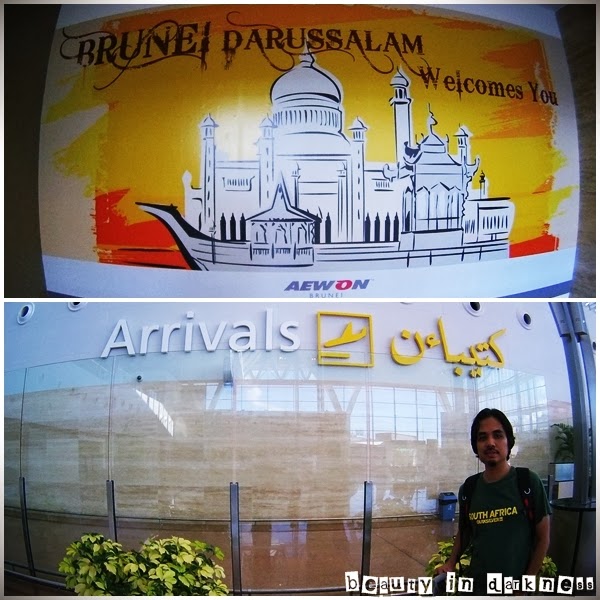 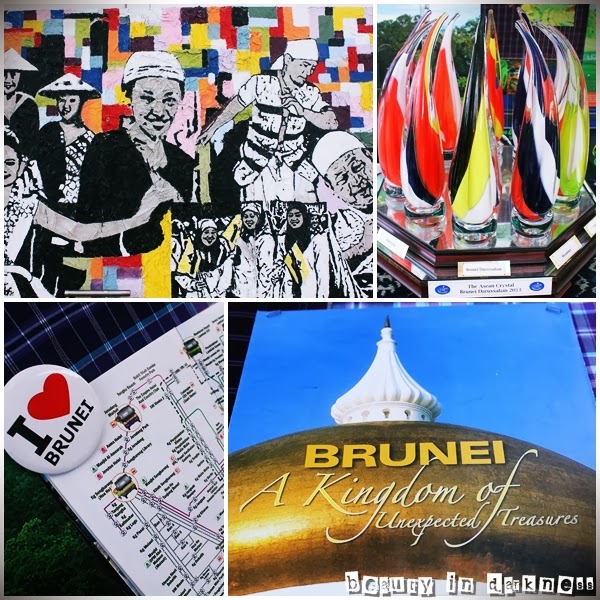 I had no choice but to ask hubby to get some help from the one and only convenient store. Hubby asked whether is there any phone booth and she said “Nope!”. She referred us to the information counter, but there was a sign “Sorry, we are closed.” HOI, it was 9.30am! I tried my luck to get the girl to call the hotel using her phone but she asked me to look for phone booth at the departure hall. EH, BUKAN KO KATA TAKDE KE TADI? PFFT!

I had no choice but to beg for help from one of the tour agency guys who was still waiting for his group. I was lucky enough that he was SO KIND and HELPFUL. He even gave a detail description of my outfit to the hotel and forced the hotel to come a.s.a.p. I thanked him and 20 minutes later, the driver came with my name written on A4 paper. And they wrongly spelled my name! Owh well, the whole van was ours! 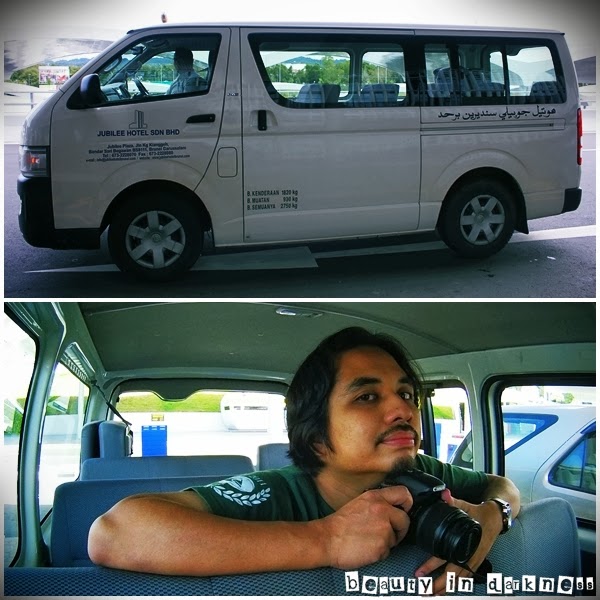 Like a fully loaded AK14, I bombarded the driver for wasting our time! It was 10.30am and we only have one full day to explore Brunei! He apologized and told me that it wasn’t in his schedule. The reception must have missed it. OK, SIAP LA KO RECEPTION!

On the way to Jubilee Hotel, we were amazed with signboards that is written in both rumi and jawi. I was wondering whether the non-Malay communities know how to read it or not. As we were approaching the said hotel, we saw Pusat Belia, one of the cheapest stay at Brunei. 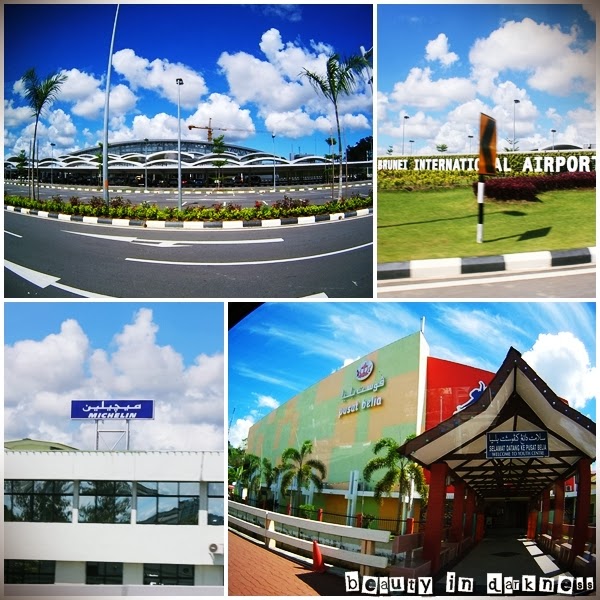 The driver then drove us into Jubilee Hotel and the moment I reached the reception counter, I straight away complained. Huh! I tell you, tak kasi muka punyaaaaaaaaaa! Blogger tau, blogger! Hahaha! We then asked him to get us any cheap car rental and called us once he got it. We went into the room and had a quick rest.

Jubilee Hotel is located Jubilee Plaza, Jalan Kampong Kianggeh Road, BS 8111 Bandar Seri Begawan, that offers free airport transfer, wifi, and free city tour (one hour). The room that we got was a bit smaller with the price of RM239.29 per night (free breakfast). This price was cheaper than what Booking.com offered since it was bundle up with flight fares. Within 5 minutes, the reception then called us and said the cheapest was BND70 per day, with BND300 deposit, IN CASH! 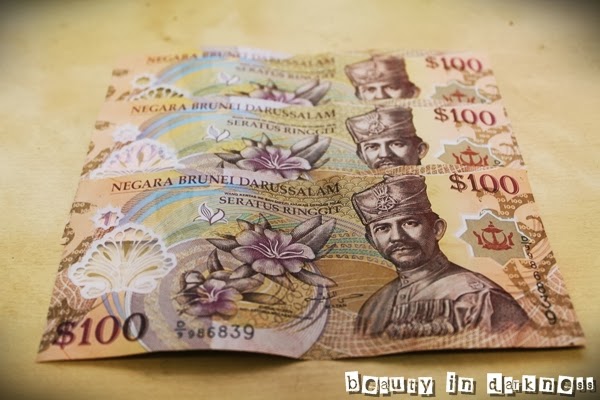 HOI! We only bring BND150 each kot! I told him that I will do the negotiation with the owner, so just get me the car. Cewah! An uncle came with a maroon Vios, and introduced himself as the car owner from AHKA Rental. While hubby was checking the dents and scratches, I negotiated with the owner. The rental was BND70 but I told him that I can only give BND100 as deposit, since we didn’t bring many cash with us. Plus, we’ll be going back tomorrow afternoon. The uncle finally agreed and offered us a driver.

“Owh it’s okay…we used to drive on our own whenever outside Malaysia, so shouldn’t be a problem…” I told the uncle. (Malaysian Driving License is valid in Brunei. Cool!)

“Yeah…if you can drive in KL, you definitely can drive in Brunei…hahaha!” Hubby added, and the uncle agreed! NO TRAFFIC JAM AND THE HIGHWAY IS SUPER WIDE AND HOLE-LESS! 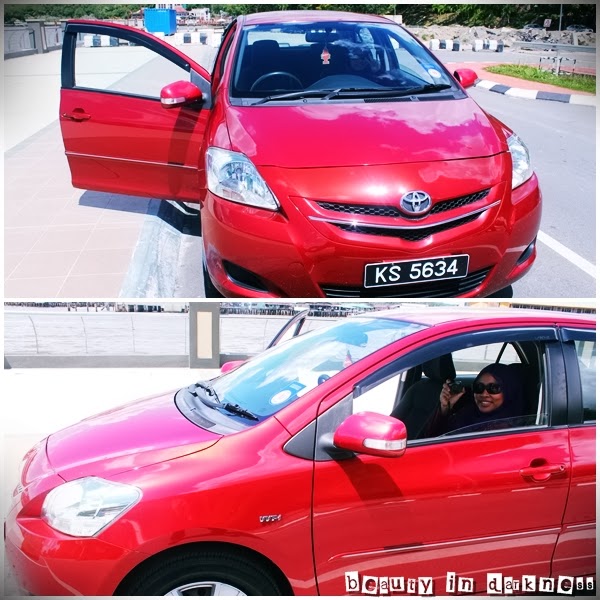 This is about travel-brunei-bandar seri begawan

you end up with deep trouble..heheh

In Brunei education, everyone have to learn Jawi and non-malay female has to wear tudung :)
This info is from a sis friend's who studied in Brunei

really glad there is a famous blogger willingly to come to brunei & blog abt it. heheh!!!btw as sYun said all the student not only malay have to pass their ugama/jawi paper & yup amoi wear tudung….so cute. xsabar nak den gar spa kata blogger famous pasal brunei

rostina, uih the statement is too overwhelming la...i tak famousssss hahaha! anyway, we love to be in brunei, fuel and food are cheap!(do not convert la ye). highway so luas and cantik! and good to hear that non-malay also know how to read jawi...i bet malay in msia also still ada yang cannot read jawi...

Been Brunei many times and ever stayed and studied there when I was very young. You should try one day drive from Sabah to Miri, Sarawak, passby Brunei and will get two full pages of passport stamp. I'm glad to know that you are going to become mother soon. Congratulation to you and your husband.

diana, we did think of it if we didnt manage to get that AA ticket to brunei...since i need to limit my movement n long journey, we had to opt for brunei ticket jugak :) tx!

thanks for the compliment of our car rental service. come back soon.. :)