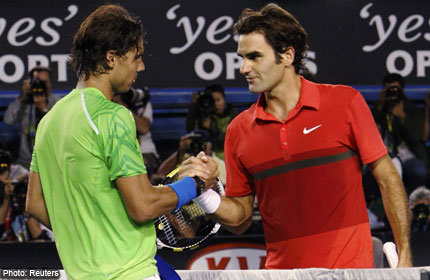 BUT, it seems like I have no issue at all, coz both, Fed and Nadal, ARE my choice of boys. Though Fed, the 16-time Grand Slam champion lost to Nadal, the 10-time Grand Slam champion, he is still voted as the greatest player EVER.
Their head-to-head is now, 8-2, and Nadal still a puzzle that Fed can't resolve. I can see the difference when Fed played his tennis over Nadal, and vice versa. Fed can easily turn down his opponent with aces, while Nadal never fail to shout "vamos" everytime he does his "banana" ball. But when they played each other, they didn't do this, for they respect each others so much.
It was sad to see Fed walked out from the court and not through to the Final, knowing that he CAN beat Djoko. My faith for Nadal isn't that strong, as he has issue playing over someone is taller than him. But playing under pressure is just Nadal's way of tennis, so I REALLY hope that he can beat the Serb.

Unbuttoned by Biqque at 5:17 PM