We did the same flying routine.


Drove to 'the secret place' where we parked our car and hopped on two public transports before we reached LCCT. On the bus, I suddenly noticed that I didn't bring along the printed flight itinerary, IC, and credit cards!

OMG! I HAVE NEVER FORGOTTEN ALL THESE! WHY! WHY! (It must be the new IPod...hahaha!)

Tips : Always check your important documents before you left your house!

I only had Rupiah, IPod, and HP in my new Beijing souvenir pouch that Lily gave, a day before! Lucky hubby held my passport!

I quickly called Maybank Credit Card Center and asked them my credit card number, and whether the hotel already charged me or not. Maybank has done a very good job by calling me back to inform that the hotel already claimed from Maybank. They also advised that some hotel DID request for physical credit card for confirmation, which terrified me to the max. She wished me good luck and prayed for my smoothness trip. Ya right...

With bucket of agony, we checked in via Kiosk machine and walked into the waiting area. We sat nearby Gate 6, and to kill time, I tried to use my new IPod and searched for Wifi @ LCCT but IPod was beaten by hubby’s Dopod that got connected faster. Hmm…Safari.

Tips : Always check in via Kiosk or Mobile for faster process.

We had in-flight food, the usual Pak Naser Nasik Lemak (what else you can order online huh) and a cup of drinking water as its combo. The rest, it was a boring 3 hours flight. 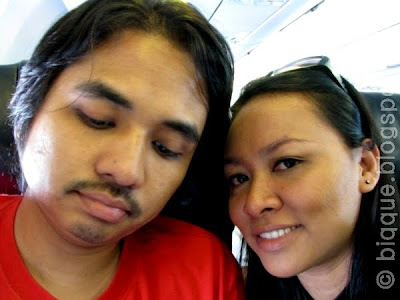 The pilot announced that we will be landing in 15 minutes. Yeay!

20 minutes passed by. Why weren’t we landing?

The pilot then re-announced that due to traffic congestion at Sultan Hasanuddin International Airport, he unable to take us down. In other words, he will take us round and round, till all passengers puke at each others. Hahaha! 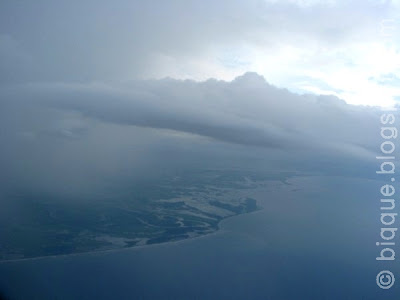 It was raining when we landed. Dang! Ok, I didn’t blame the nature but we had jinx where if it’s raining on the first day, it will be raining the whole trip, EXCEPT the day we fly back. Humph! 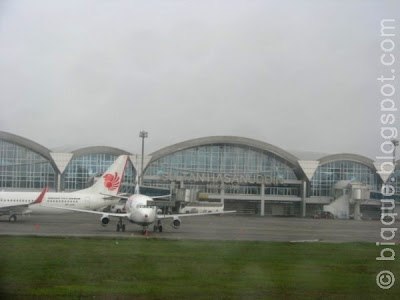 We queued at the Immigration and got trapped behind a group of family of 13! It was our turn when the officer asking for our fly-back ticket. HUH? No countries have asked fly-back ticket at Immigration counter?! For what?! We looked around and other Malaysians started to take out their flight itinerary. GREAT! I didn’t bring along our flight itinerary! It was my first time, and it happened there and then!

The officer then held our passports, and asked us to go to Air Asia counter to get our flight itinerary printed. We had to walk from the one side of the terminal, up to the other side of it, passing by the arrival and departure hall! IT WAS FAR, OK!

We finally reached the stuffy Air Asia office where there was a young man who was smoking ‘kretek’, quickly lit off his cigarette once he saw us. We told him what the Immigration officer wanted and he helped us to key in our booking ID.

Another GREAT issue happened where the server wasn’t available! He used two PCs to check our booking ID and I, myself, helped him to re-enter the button, whenever it failed. And I thought it wasting our time! So I suggested getting one PC that has internet connection, where we can print the flight itinerary FROM the Air Asia’s website.

Another officer came in and advised the guy who helped us just now, to bring us to another office across the hall. We followed the guy and went into ANOTHER stuffy room where three young guys were smoking ‘kretek’ in front of two PCs. One of the guy excused himself and let me accessed the internet.

I quickly sat down and try to connect to Air Asia’s website, but hell noooooo, the site was darn slow! In lightning-speed, I IMMEDIATELY switch to Air Asia’s mobile website and FINALLY got our flight itinerary printed out! Yesss!

I SWEAR! WE WERE EXACTLY LIKE IN THE AMAZING RACE!

We ran back across the departure and arrival hall, where another guy, ran along with us. HUH? Who the hell is he? Owh…another unlucky passenger who forgot to print out his flight itinerary. Hahaha! He’s from Sarawak and he, also, didn’t expect that Indonesia Immigration will ask for this. We talked bad about it until we reached the counter, where one fugly bald Immigration officer, SPOKE LOUDLY, about our stupidity! He even shouted HOW GOOD Indonesian Immigration, whom willing to wait for us that we couldn’t even get this service in Malaysia.

I SWEAR! I REALLY WANT TO PUNCH HIS FACE AND ASK HIM TO SHUT UP!

We told the other officers that Bali, Jogjakarta, Medan, even Jakarta, NEVER asked for the flight itinerary. And that fugly bald officer started to interrupt our conversation by saying this is not Bali, or else, go back home! I looked straight to his face. He boiled my boiling point and REALLY spoilt my point of view on Makassar people! Those who helped us have been vanished by his attitude!

You know what they did after look at our flight itinerary? NOTHING! They handed back our passports and we were allowed to go. At this moment, I SWEAR THAT I WILL NOT VISIT MAKASSAR, EVER AGAIN! We said, “Ya right, ya right, whatever!” and walked off from the fugly bald officer. And I continued, “You must be one of those who can’t go to our country to earn more money because you are so fugly bald, and that is why you are stuck here, waiting for passengers who forgot to print their flight itinerary, that was not supposed to be given to you!”

Well, I was that mad.

Unbuttoned by Biqque at 3:40 PM

This is about travel n vacation, travel-indonesia-makassar

sabaarrrrr! hehe i kena hadapi lagi 2+ yrs of this pfffft

pape pun still waiting for ur next story :)

I agree with you that service in Indonesian airports (all of them) are very substandard and embarrassing. However, checking for foreign passenger's return ticket is actually standard practice in every airport worldwide. If you didn't get checked, it simply means that you're lucky or the immigration guy is on a good mood - otherwise no matter where you are and where you come from, you will be checked.

Some Malaysians question the need to check for their return air ticket on the comments section - it seems that they think that it's common for developed countries to check for return air ticket because they're worried that people who come from less developed country will stay in their country as an illegal immigrant - but nobody wants to be an illegal immigrant in Indonesia so asking for proof of return ticket sounds unreasonable and moot.

I do understand your unpleasant experience in Sultan Hasanuddin Airport but you don't have to sound so arrogant as to dismiss that everything bad you experienced in Indonesia is because of some stupid 'hatred' between Indonesian and Malaysian netizens. Or because we kalah bola.

And I hope you understand that the Indonesian workforce in Malaysia issue is mutually beneficial - you reap the benefit of cheap labor as much as we benefit earning money from you. Nobody is doing charity to anyone - if Indonesians can speak English proficiently, in all honesty, who's stopping us from moving to greener pastures like Singapore & Hong Kong? They need cheap labor as much as Malaysia do and they treat their foreign workers with more dignity.

The fact that a lot of us choose Malaysia as a workplace is because of our love of Malaysia, which is indeed our closest neighbor, which share familiar similarities in religion & culture with Indonesia. If we are so ungrateful, we would never go to Malaysia to work - we would choose Saudi Arabia or UAE instead. God knows the pay is much higher.

I once talked to an Indonesian cleaner working at KLCC and asked her why did she choose Malaysia as a workplace? She answered, "daripada kerja di Arab atau Hong Kong, lebih baik kerja buat orang sendiri!" (I'd rather work for family rather than work for foreigners like Hong Kongers or Arabs). Indonesians have heart - we love our brother Malaysia!