U Must Listen To Garaa Band!

I might be biased (who cares if I am) but this indie band, memang best!

CLICK BELOW LINKS TO LISTEN TO THEIR HIT SONGS!

(My favorite!)
"Garaa band was formed in 2006 by Nanzo on guitar, Fyzal on drums (former band of Projekt AK, Groundrule,Polythene, Chronic Mass), Arab on guitar (former band of Groundrule, Chronic Mass), Apek on bass (former band of Reprisal) and Dibitz on vocals (former band of Jem & the Holograms). Friends for more than 15 years, they decided to form a band when they reunited after a long separation.
Their 5 tracks EP/Mini album was released independently in 2007 with all songs written by Garaa Band and lyrics by Nanzo (except “Lost” by Dibitz). Garaa Band brings you alternative progressive rock with influences from The Cure, L'Arc-en-Ciel, For Love Not Lisa, Jimmy Eat World, and many more.

Recordings were done independently with the help of Ajeep (Kluk Kluk Adventure) and Syami (Projekt AK, d-Va). Garaa Band has been performing in various underground gigs." 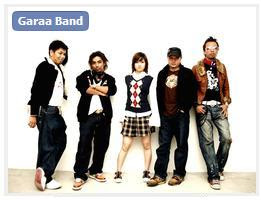