Gonal-f Makes You Becoming A Junkie? 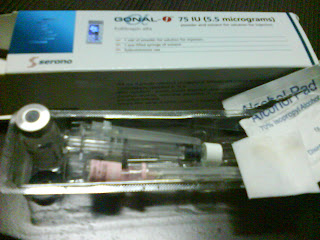 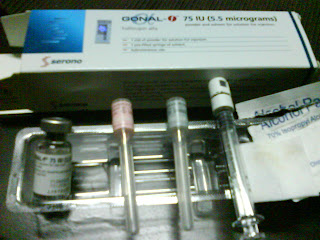 Yup, I'm officially a junkie when I (with hubby's help) jabbed my stomach last nite...


Jab in the needle into my stomach is peanut, but when you force the drug in, its quite painful you know...it stung a little la but still...(or I yang mengada sangat la). But frankly speaking, you can feel the drug flow into your vein. So you have to do it slowly (lucky I have muffin top fat that can reduces the pain...hehe!)

GONAL-f belongs to a class of hormones called gonadotrophins. FSH is necessary in the growth and development of egg cells (follicles) in women and sperm production in men.

GONAL-f is used in combination with human chorionic gonadotrophin (hCG) to stimulate the production of sperm."
If your notice, Gonal-f should be used when you have not responded to Chlomid treatment. Hmm...now I wonder why my doc advised me to take both drugs at the same time...am I Chlomid resistant? Or she just wanna charge me a bomb through injection rather than swallow? Or she wants me to conceive fast so that she can entertain another patient? I choose the third one :D)

Pray hard for me ok?

Unbuttoned by Biqque at 9:15 AM

hahaha, ur story is exactly like mine (my mon caught both of us in my bro's room, was doing the same thing.. and she went like "haaa? korang buat apa? terus terasa sprt penagih kan? ekeke). U plan to IUI later? All the best, Insya Allah...

I'm doing it for the second one, too... Insya Allah. Marilah sama2 berdoa :)

wowww. takotnyaaaa! hahha. seriously, i cant watch a person getting injected, let alone me myself yg nak inject org. wow, again. hehhe. goodluck and i hope u will conceive a baby soon yeah. and yes deary, u totally qualify as my nurse :)

psttt.. how much is the damaged?