Ok, last nite's game DID give me a big time pressure...Fed needed to win his 15th Grand Slam, while Roddick needed to win his 1st Wimbledon. And I must say, Roddick played VERY WELL. With no tie break on final set, Fed was forced to lead the game, while Roddick, had to level the set. Both know how to make aces (Fed made 50 aces), and both now how to play their tennis very well. When last year's game between Nadal and Fed had its own epic history (the longest and the best game ever), this year's game also had its own epic match (Final set : 16-14).
And there he goes...my boy had his 15th Grand Slam yesterday, surpassing Pete Sampras's record (who finally came to watch the game and prepared to lose his title haha), and hold World No. 1 back (yeah, i know it was quite unfair since Nadal didn't get his chance to play but what can I do...). 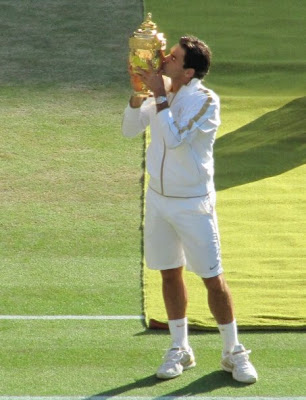 Pity Roddick as it was too pain to discuss the defeat (ye la, salah sendri...but hubby salahkan cahaya) as he has be seen crying on the seat (dengan muka tak puas hati gile) after he had a very good fight till Fed can't even think of a way to stop him from winning. 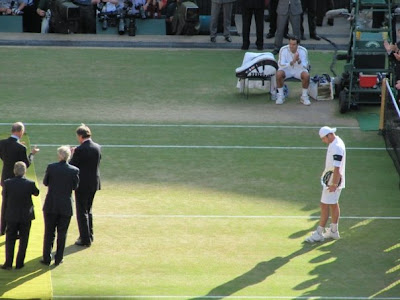 Looking at how Roddick took the result, he would come back to claim the throphy (if he didn't quit). I know how bad he wants it (when Fed said to Roddick that he lost to Nadal last year and felt frustrated as what Roddick was, Roddick replied "but you've already won it 5 times") Hahaha! Kelakar gile! He even appologized to Pete, for he can't hold Fed from overtaking the title. Hahaha! Tapi tu la...kalah sebab salah sendiri, memang la sakit hati...kalau sebab Fed kasi kaw-kaw takpe gak...

Anyway, congrats to both of you, Fed and Roddick!

Unbuttoned by Biqque at 9:26 AM

aku nengok game tu ngan senak perut teramat. but thumbs up to Roddick. he was great. it just that his ludy luck aint smiling on him. but Fed was out of mind! last set yg mendebarkan.. hahahaha..