ALL BLACKS HAS GOTTEN BACK THEIR TROPHY! Memang jaguh kampung betul la :D 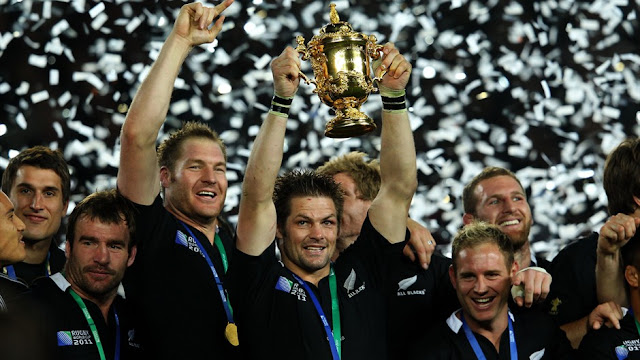 Congrats to the captain, McCaw, for your amazing line up!
And why did i say that? Coz this year was just a repetition of 1987, the first Rugby World Cup. Same host (New Zealand), same opponent (France), same victory (All Blacks). Macam sireh pulang ke gagang la ni...kihkih!
My personal view of the game are :
1) All Blacks seemed lost in their tactical game (Weepu missed kicks, Nonu lost his side steps, William still with his last 5 minutes appearance)
2) France tried their best to play defend (rucks, rucks, and rucks...no drop kick, only 1 try with failed conversion)
3) All Blacks later had no choice, to copycat France and played defend as well (that was the only choice that they had)
Overall, France, who was initially considered as a "lucky" team that had through the final (BLAH LA KO BENJAMIN TOK, sukati ko je kutuk France, ko main untuk Selangor je punnnn), has given a hard time to All Blacks. Losing 7-8 to All Blacks was the lowest score ever in history, and no one would expect that. Few stars were injured, and Cruden had the most where he snapped his knee. Scary gile tengok!
That's the end of RWC 2011. Being in New Zealand to witness the fever, was the best that I can ever imagine. (Masa World Cup Cricket, aku kat India. Best gile tengok game kat railway station. Hahaha! Masa Quiksilver Pro Surfing Competition, aku kat Gold Coast, layan mata tengok gadis pakai thong. Yes, si Slater surfer hebat tu menang lagi tahun ni tau tak!) And being at home, watching the game with All Blacks flag stuck in the pokok hiasan berbentuk bulat, seeing Nonu doing his side steps, Carter's kick (sian dia injured), Weepu yang tetiba asik missed target, was truly enjoyable.
What I'm gonna miss most, was the jelir lidah Haka dance by All Blacks, and the jawapan sukati France Captain, Dusautoir, who never failed to make me laugh! Seriously, you guys know how bad is French's English kan. This guy NEVER got the question right during interview. Orang tanya lain, dia jawab lain. Comel sungguh! Hahaha! (Bila la dapat gi France niiiii!)
So, England will be the next host for the next 4 years, followed by Japan, for the other next 8 years. Itu rugby. Kalo World Cup untuk bola? Brazil 2014. Ada brani???