There were banners all over the dockside, with country names, flags and welcome greetings. Many passengers were queuing to return back to the mainland. Wah, so early. We straight away went to the Tourist Information Center and took two English version pamphlets of the island. (One for you, Lily the Globtrotter :D)

Tips : Get a copy of the island map to avoid lost in translation. Though the island is round and you will come back to the same spot, it would be more adventurous if you follow the tracks.

“Aaaaaaaaaaaa…this is the placeeeeee! The most popular passageway with high trees on both sides…aaaawwwwww…” I was thrilled, looking on the left! 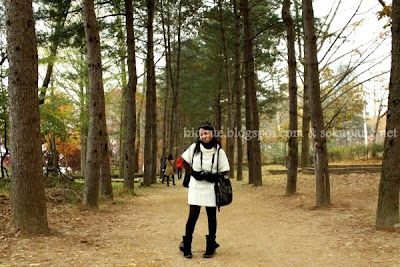 “Aaaaaaaaaaaa…here also gotttttttttttttt!” I looked on the right, which looking similar to the left.

Now we had no idea which way to go, and the island was quite huge. Dang!

So we followed our instinct and chose the left side first. At this very moment, I swore, we started to jump here and there, taking tones of pictures. The scenery was too beautiful to be missed out, we didn’t dare to overlook, not even an inch away from all those brownish trees and yellowish leaves. 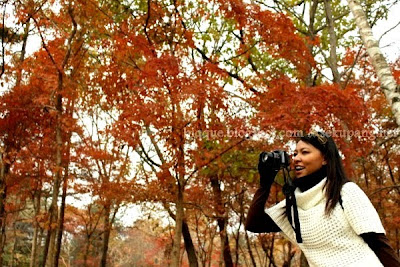 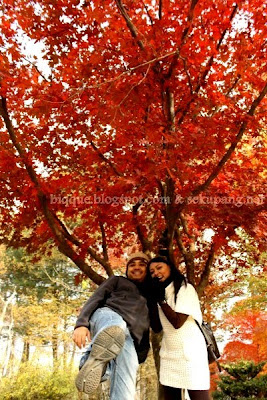 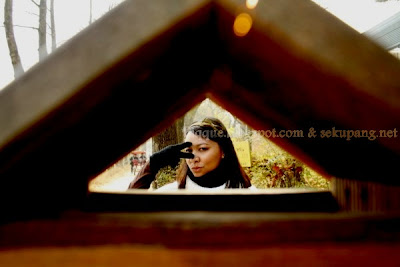 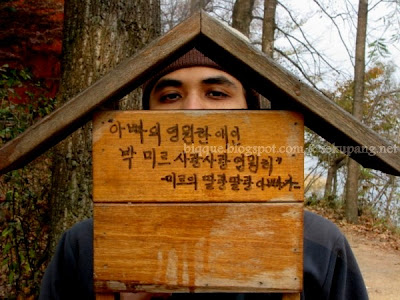 We stopped at one spot where we had a great view of river at the back and scattered dried leaves on the floor. I quickly set up the tripod and had to use Canon S5 instead of Canon 50D. Hubby so stingy at this time, and forced me to test with my used S5 first. Cit!

Tips : Please capture as much pictures as you can to avoid regret-ness. Don’t delete any un-pretty pictures until you come back to M’sia. Save your batteries. Believe me, 4GB memory card with 5MB each pictures still able to go up to 1000+ images.

Anyway, we tried to make the photo capturing fun and funnier. We grabbed handful of dried leaves and threw to each other and wished the camera to capture the right moment with 10seconds timer. Hahaha! The result turned out to be noooooottttt so bad la but still, the lighting wasn’t good enough to give better pictures, especially when we had to deal with hazy grey sky.

We walked further around the left side of island and saw one site with small rounded rocks being organized into stacks. In the middle, there was one igloo-shaped formed by the same type of rocks, written in Korea, so we had no idea what it was for. 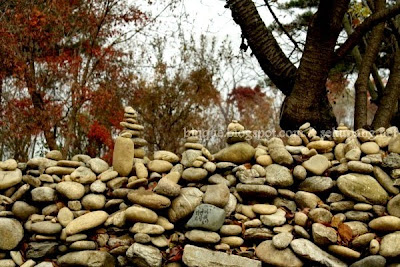 “See! Squirrel! Cuteeee! Hahaha! Tak lari plak tu!” There was one squirrel that seemed wasn’t afraid of human at all, hopping, jumping, climbing all over the places. 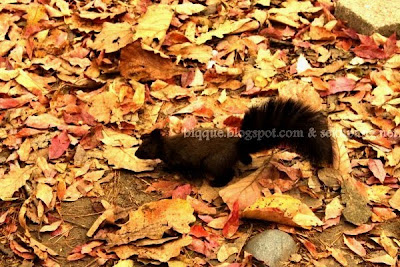 Tips : Try to explore non-track places to experience something that other visitors might have no chance and skill to do it. Don’t worry, there are no landmines and bouncing betties from World War II.

“Sooooooooooooo beautifulllllllllllllll!” I felt super happy when I saw more and more red and orange leaves around us. With this weather (cold and sunny), we were so glad that we were here, in Nami Island, Seoul, Korea! 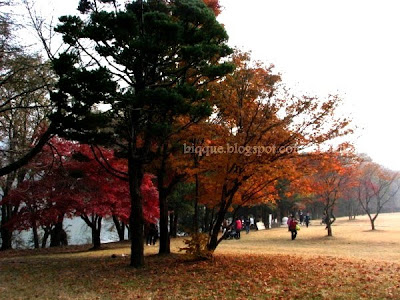 While we were walking, some visitors were cycling tricycles, driving buggies, and some just sitting in the train for a round trip (payable). None of them were Caucasians, most of them were locals and Asians. Hmm…why leh? Not popular meh? Since that area was quite deserted, we took our chance to place the tripod to capture more and more couple pictures. We started to throw leaves at each other and attempted to act naturally but we can’t! Hahaha! Especially when I tried to imitate one local family whom a mother and a daughter laid on the grass and rolled over to get nice poses. Hubby even sat down too to follow my craziness. Hahaha! Abis baju penuh rumput! 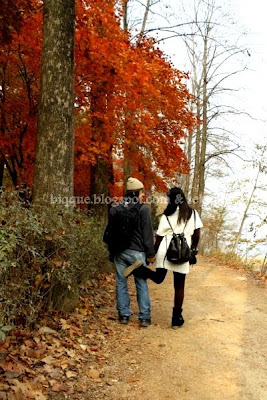 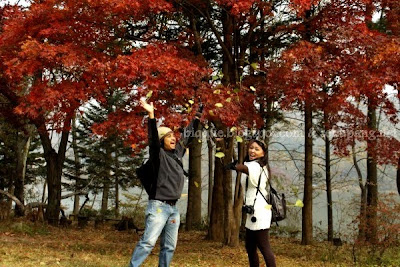 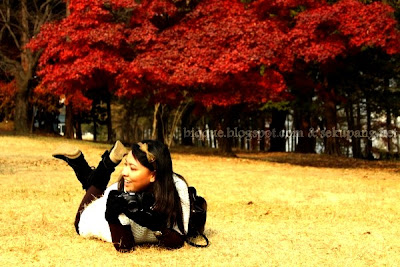 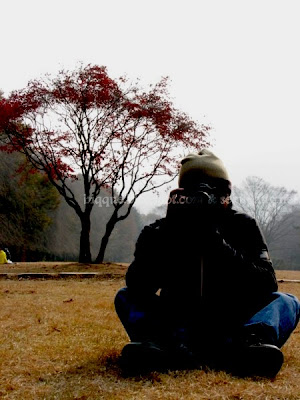 Tips : Use your imagination to make your pictures look better than the real situation. Google and save best angles for your reference. Believe it or not, we were the only human who threw leaves at each other besides squirrels.

Later at one of the favorite spots in the island, we took picture with Winter Sonata First Kiss mark that had two smiley stiff-snowmen. (Ok, frankly speaking, I didn’t watch this drama but basically I know what this drama was all about…love? At least I know what…hahaha!) 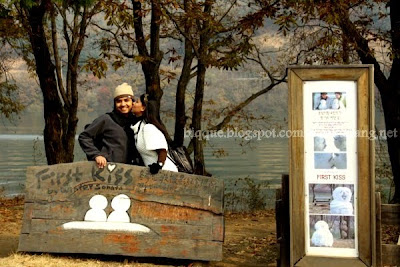 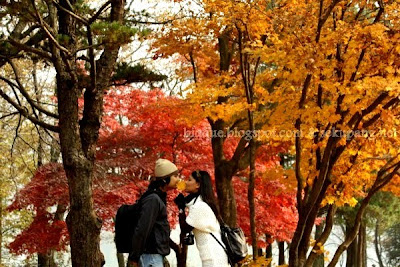 We didn’t explore the whole part on the other side but basically it was fully occupied with gardens and R&R spots. Most of the places were fully taken by families and kindy kids. Once, there were 3-4 kids came to us, talking Korean. I wasn’t sure what they were asking for, either they wanted to be our models (looking at the camera), or fancied me (touching my watch and hair), or waited for hubby to give a spoon of ‘serunding’ to them (hubby was eating at that time). Hahaha! When we had to make a move, one of the kids followed us and almost cried when his mom disallowed him to do so. Hahaha! Cute gile! 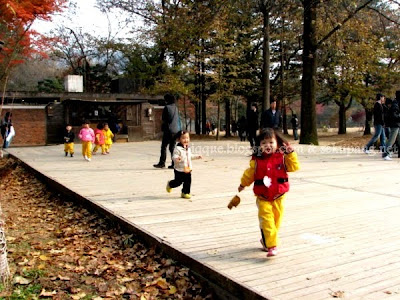 We crossed the train track and walked towards the man-made canal and saw a long line of hanging up-side-down colorful umbrellas. Next to this area, there was row of info boards with country flags, map, info and pictures. I believed that, it was due to G20 Summit that just around the corner. We went to few countries boards that we have visited before and captured photos with different face expressions. 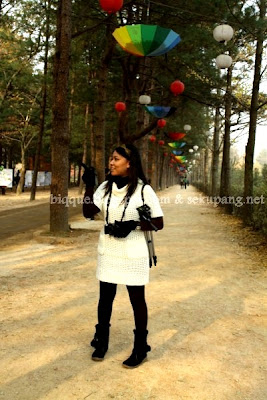 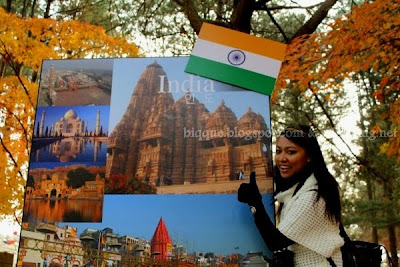 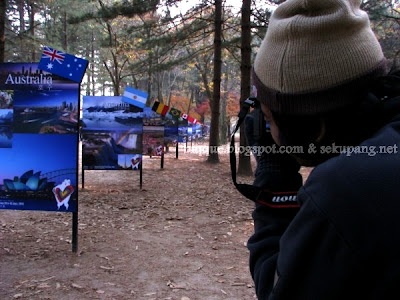 Tips : Aware of your surrounding. Train has no gates and will crossover right in front of you without you noticing it. Make sure you are not color blind and deaf, coz the train is in blue and it honks. 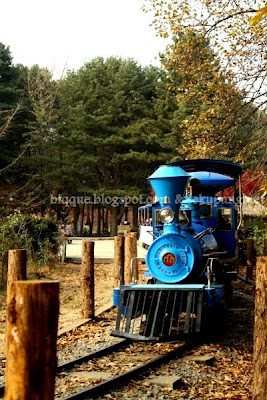 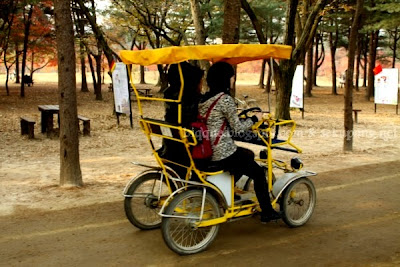 Not far from those boards, we saw man-made leaves formation on the ground. THEY WERE MARVELLOUSLY CREATIVELY CREATED! (Not sure who made it, so we claimed it US :D) Nearer to the stage area, we saw one big rock with poem for General Nami next to his tomb, who was a royal blood that was denounced as traitor. He was then been executed by the order of King Sejo, who then been succeeded by King Senjo, who later revealed the false evidence to execute the general. Huh??? So jahat! 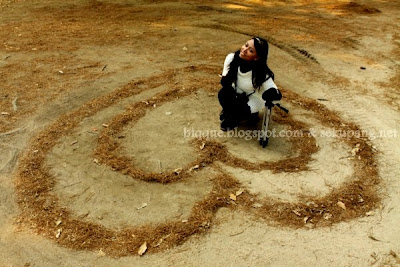 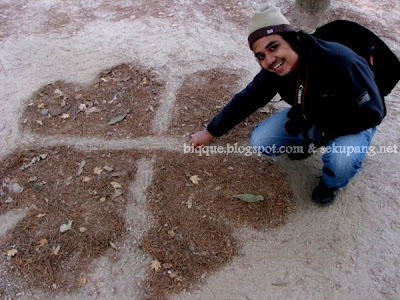 Tips : If you have no time to read, then capture it.

In this island of love, I noticed lots of name being carved on the trees and boards. Lots of small rocks being stacked up high. Lots of books being displayed on the shelves. And the most outstanding mark was the Namimaid statue, right next to the wharf. And she’s naked. Strictly resemblance of Korean lady, tall and slim. I took a chance to pose like her, still. 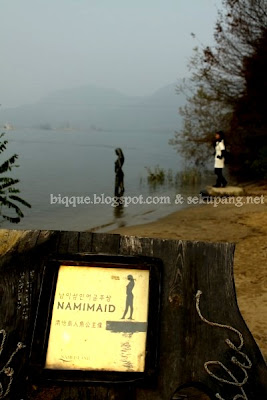 We hopped on the river ride and met two M’sian ladies who happened to be in Seoul, few days before us. While eating 1,000won=RM3 hot potatoes, they gave us some guides on the places that they have been to, and shared a cab with us from the ferry wharf back to Gapyeong Station. 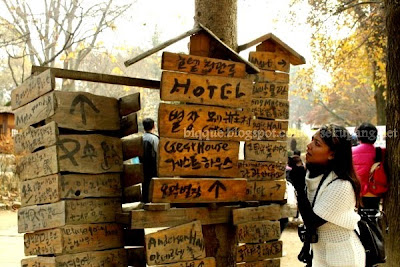 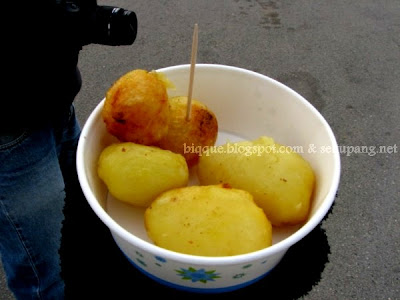 While these two ladies had their return tickets, we had undergone the same process where we had to buy STANDING tickets for the available train, which was being hold for 2 minutes by the station manager, WAITING for us to cross over the tracks!

“Sankyu, sankyu!” We bowed and ran!

Unbuttoned by Biqque at 5:30 PM

suke the colourssss... i cant wait for april, i hope for bluer sky and sakura bloom

oh, in love with those autumn leaves. Cantik!

Hi on which date did you visit Nami Island? I'm afraid when i visit i might miss the fall foliage and only get to see botak trees!