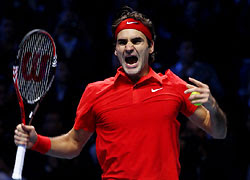 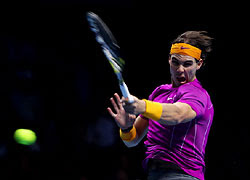 Rafael Nadal
ROGER FEDERER IS THE CHAMPION OF ALL CHAMPIONS! He claimed his 66th title last night! (local time).

He lost his No.1 to Rafa ealier but he joined another two greatest tennis player, Ivan Lendl and Pete Sampras, to have won this event five times! He closed this season with extra special, 6-3, 3-6, 6-1, because of the year that Rafa had.

Anyway, I personally believe that Rafa CAN beat Federer's record since he still young. Well, he was the youngest man to win all four majors, and he still winning. So, why can't he, right? But guess what, Federer has NO plan to retire! Yesss!

Knowing both champs, the statement that they gave at the end of every game was honestly fair. You know, the Swiss praises the Spanish, the Spanish praises the Swiss back...things like that...hahaha! I just love them both! 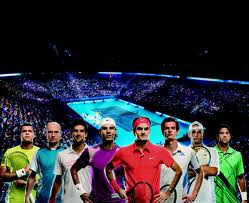 Unbuttoned by Biqque at 6:30 PM

Go rafa~! but sometimes both of them look the same...

look the same in terms of....? looks DEFINITELY not la hahahaha...