Universal Studios Singapore : How We Start The Trip

“Please print your e-ticket!” I reminded everyone. Lucky Lin reminded me to print the correct one, she even sticked a yellow note on my lappy bag. Otherwise, I would have forgotten about it.

Earlier on, we agreed to meet at Seremban RnR at 10.30pm, but after some dialogue at Satay Station, The Alien Travelers later decided to meet at 11.30pm.

Chawana came to my house and we had some char kuey teow before Lin turned up. We then drove towards the Seremban Highway and right before we reached the Seremban RnR, MasZuber called me and told that they have missed the check point. They stopped over at Senawang, while I smsed the rest, on the new check point.

Upon arrival, I called MasZuber, to check on her location. We drove towards her car and met at the first time, alongwith, Amy and Byya. I couldn’t believe my eyes that they are super cute and friendly. The momentum went well, thanks to the everyday cyber comments.

It was five past midnight, and John and the rest still on the go. “We are on the rollercoaster now…” I smsed Janggel. “Oh, we are on merry-go-round then.” He replied. Hahaha! Demyuh!

As expected, the Four Red Musketeers reached the check point and the scene absolutely changed. They were so phenomenal! Lily brought cupcakes and maruku for each car, as promised. That made my cappuchino almond cake left untouched. Hahaha! (But Byya did taste a couple, she was hungry when we met, pity her.)

After little camwhoring session, we started our journey, to Melaka. That was the second check point, where we could actually save Anash from cleaning the dishes. Beforehand, I called her and clearly she spoke to me, unconsciously. A sign for us to come and save her, like…now, now, now!

John speed up while the rest waited at the Air Keroh RnR. For a 10 kilometers inskirt area, he was quite fast. We then had late supper and for no reason, we ended up chatting like there’s no tomorrow. It was f**king 2am and we were 300 kilometers away from the third check point!

2 cars changed drivers while the other 2 were’nt. I took one and half cans of Livita to recharge, and I got hallucinated. Once in a while, I saw MasZuber drove almost on the emergency lane, so I called Byya, to keep on talking to her. Owh no wonder…MasZuber was on Livita too. She might get delusioned as well. Hahaha!

We frequently overtook each other to kill the sleepiness (someone over-overtook us before the RnR exit, and luckily she understood when I high-ed beam her, hahaha!) We then stopped for a quick refresh at one of the gas stations before we proceed further. Later on, we found ourselves drove into one hell of expensive parking, next to Larkin Sentral. John quickly led the others out, to another RM5-per-day-cheap-parking area, which we told Icam, he has reached Singapore, and the Larkin Sentral is USS. Hahaha! He didn’t fall for that.

We then headed downstairs and queued for bus no. 170. Though we know there is a direct bus and it is quicker option to enter Singapore, we played “millionaire kids who went the hard way” game. Pfft! 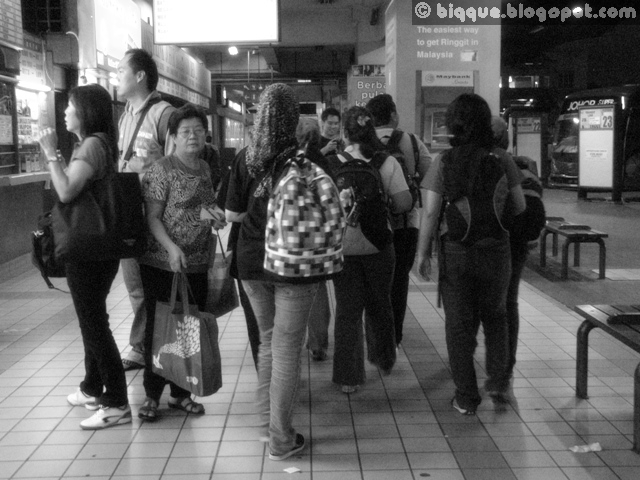 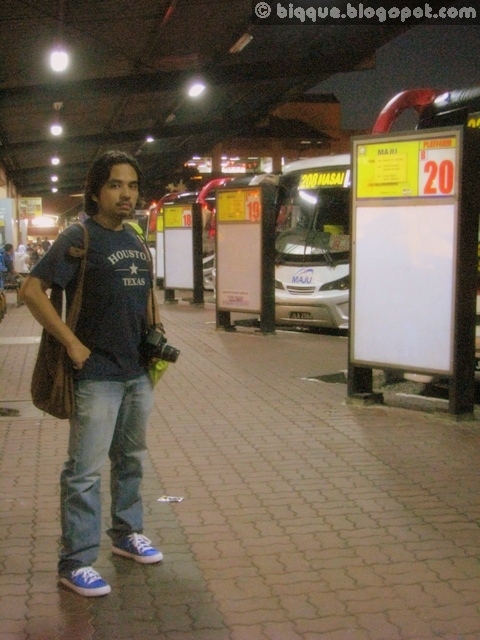 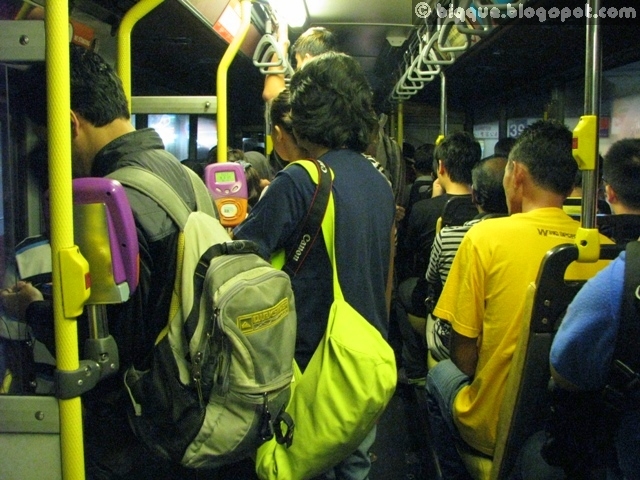 Half of us had to stand all the way to the check point (CIQ). Squeezing ourselves with those who were rushing off for work wasn’t a good idea. What happened was, right after we passed the immigration check point, we walked gently down the escalator, passing by a superrrrrrrrrrrrrrrrrrrrrrrrrrr 100 meter long queue, WITHOUT noticing that we SHOULD be in that queue! Nice… 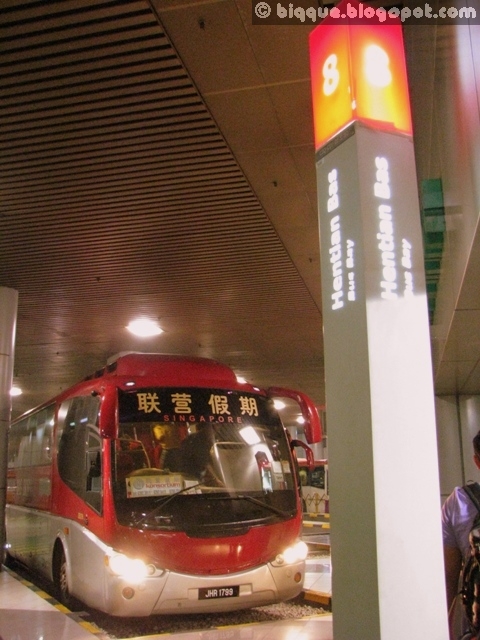 But we had fun cursing ourselves while cutting the line. Hahaha!

Again, we had to stand all the way to Woodlands. *Peace* While crossing the sea, Lily showed us where she used to accomplish that walk-a-thon via the old bridge. With carbons and sweats, I considered that as a must-try for everyone. 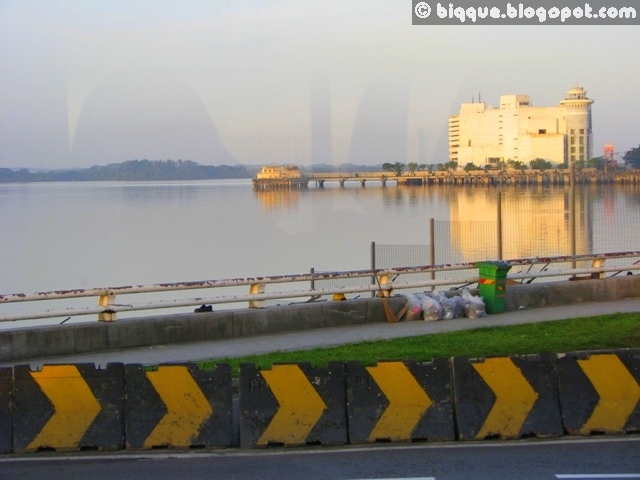 At Woodlands, we hopped off and queued for another immigration check point. This time, we saw Icam already chickened out. He was on his own, surrendering himself to be screened, for the first time. He was requested to flash his IC, must be the coat that he was wearing in the “passport” pic. Kihkihkih! Oh ya, hubby too! 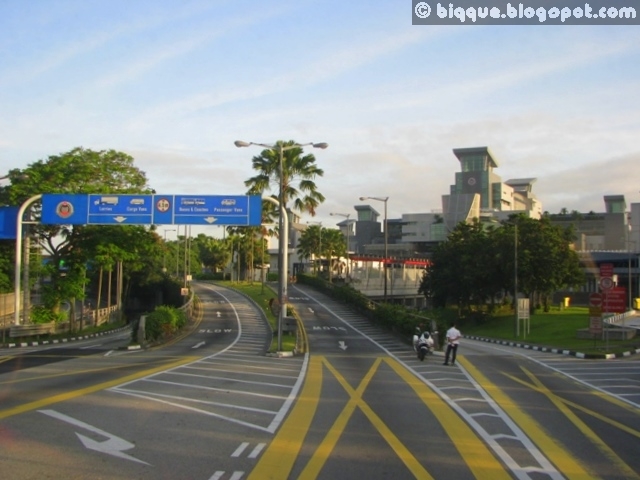 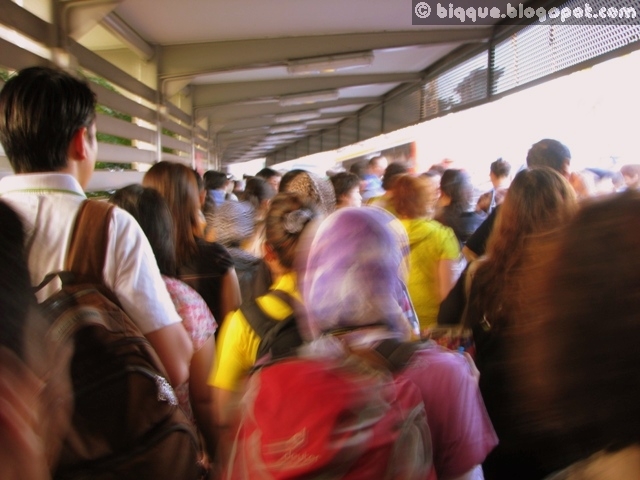 Icam passed through with a smile on his face. AND WE CHEERED UP FOR HIM. And for Chawan too. Hahaha!

Again, we had to queue, and still, we stick to the same bus. Not to mention, we had to stand. *Yada, yada, yada* Until we reached Kranji. From there, we took MRT to Vivo City. It was the longest train ever…at this point of time, I can’t stand any longer, so Anash and I, sat down on the floor, on my cheap bazooka bag! We were so cute! Hahaha! 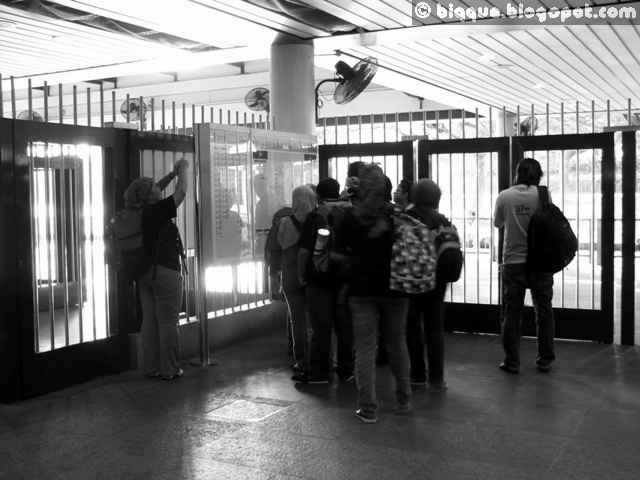 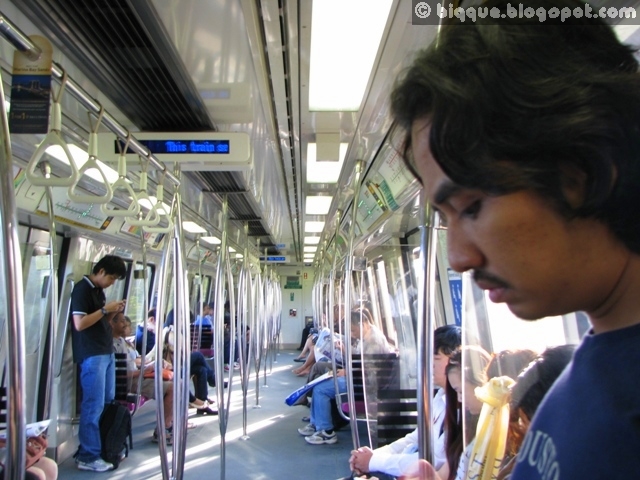 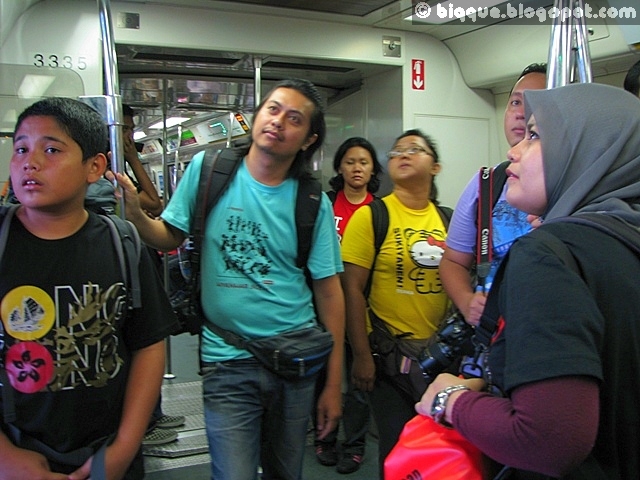 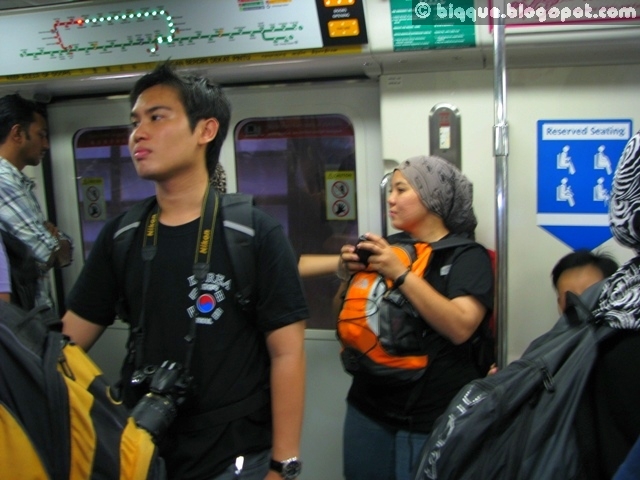 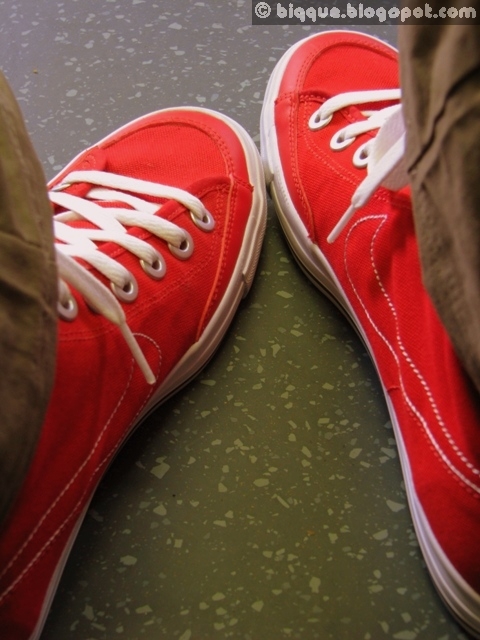 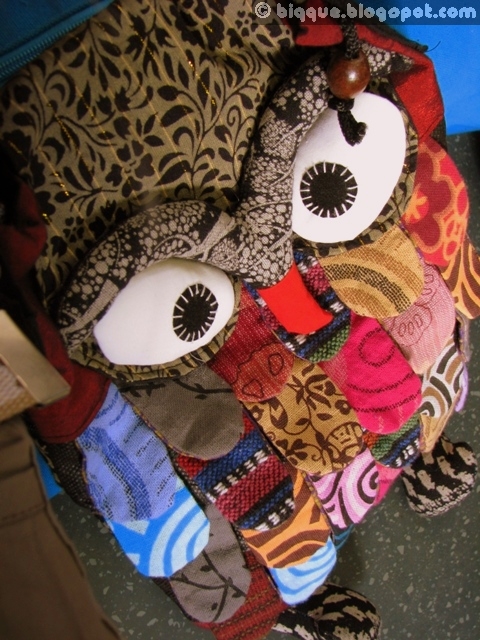 While taking our breakfast, everyone was complaining on the craziness that we’ve endured, but sticking with each other, totally priceless. At this moment, I felt like killing Janggel for pushing my energy to the max (coz he led the team) but he’s too cute to be killed. So I saved him. Coz I bet, Icam had the idea too. Hahaha! 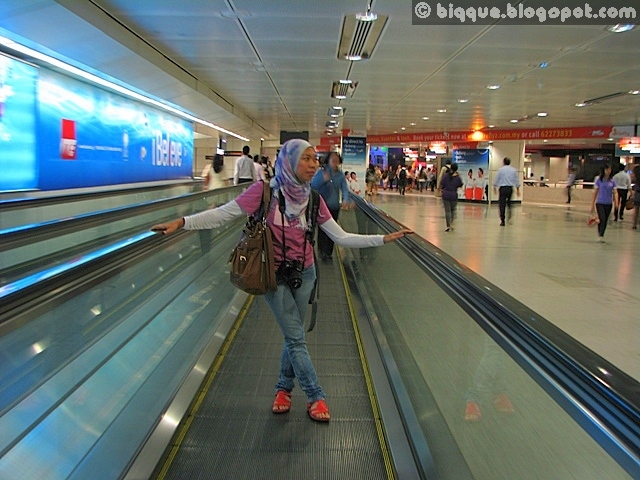 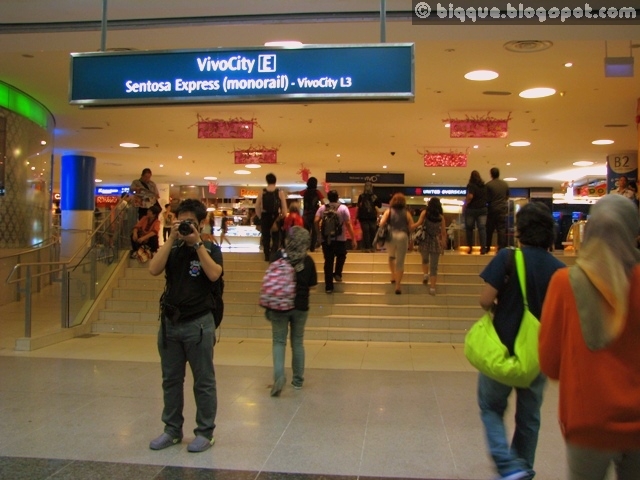 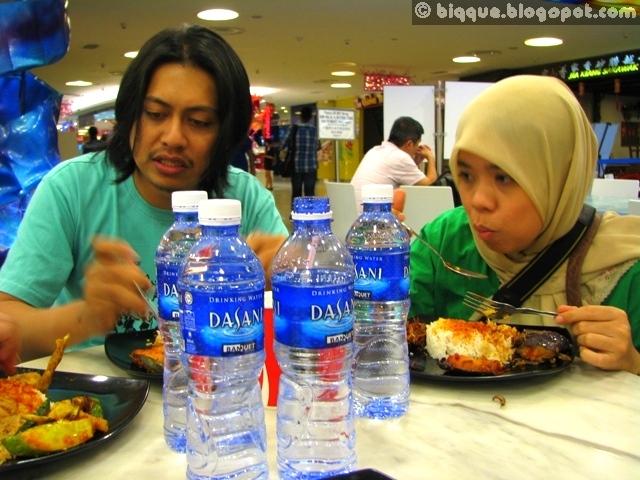 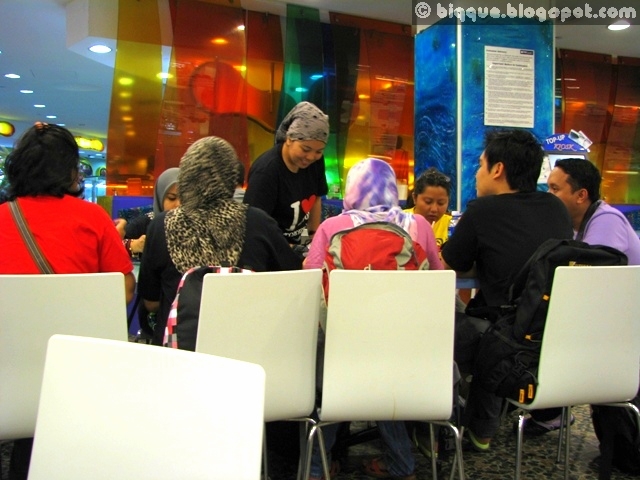 “HOI! Why so many people?” We started to panic once we saw hundreds of people queing for the Sentosa train. 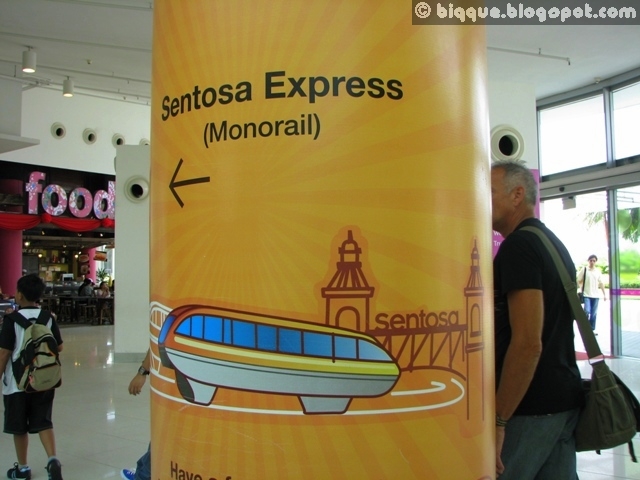 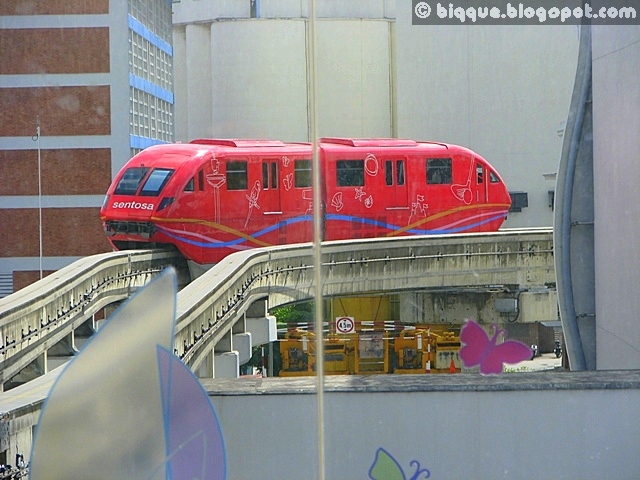 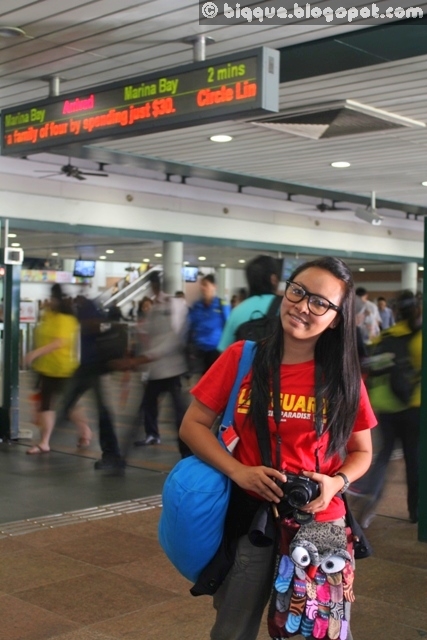 “Singapore tak cuti kan? And who are these people?!” We cursed even harder.

We tried to ignore the shityness and prepared for the first glance of USS from the above. “FINALLY!” We shouted. 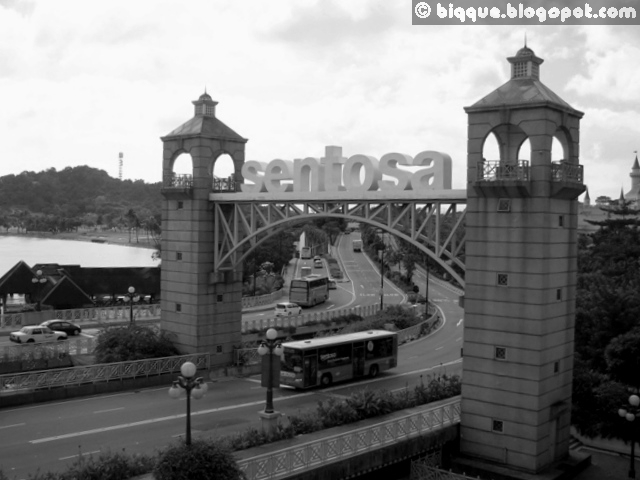 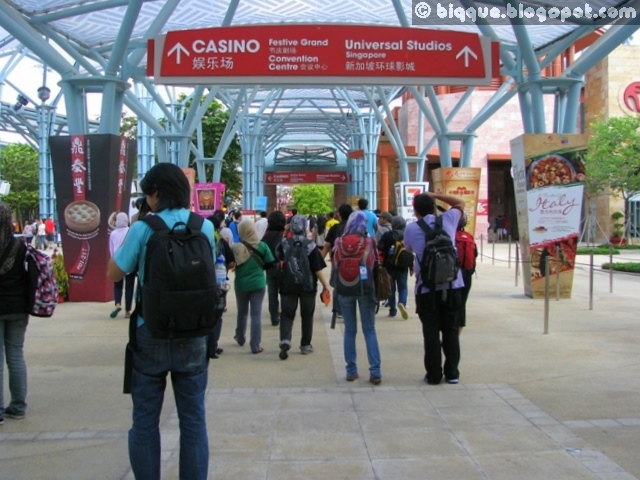 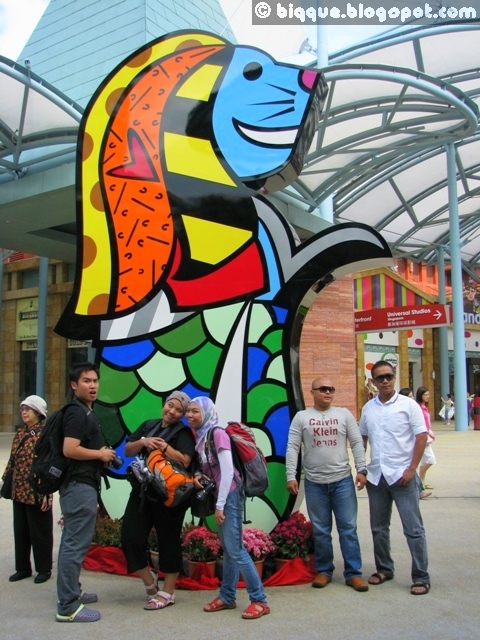 Without prolong the stay, we quickly walked towards the famous USS Globe and click, click, click! Regardless who stood around us, we put aside the overtiredness, and captured the Globe, with the most expensive A4 paper I ever had! (Now I wonder…who has the complete Alien Travelers in a pic?) 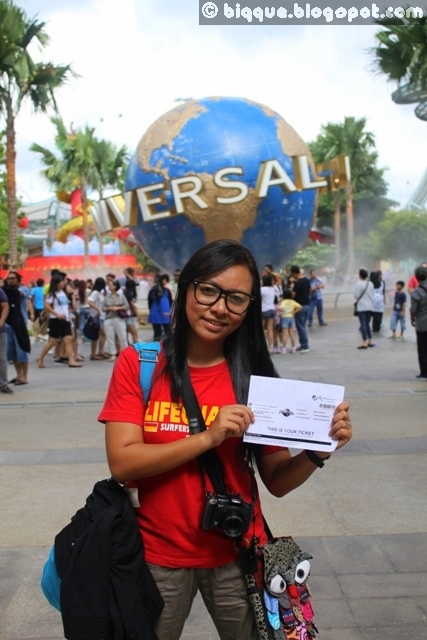 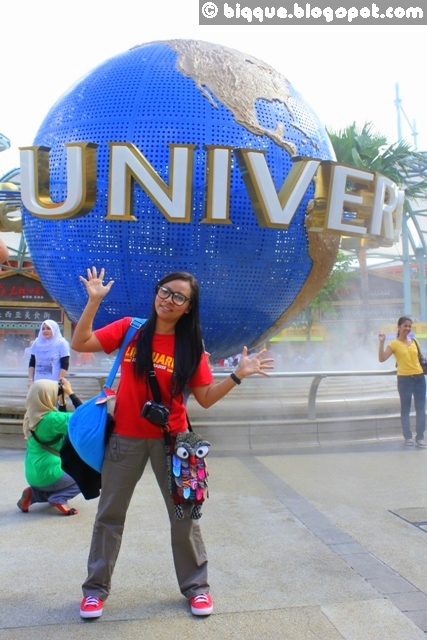 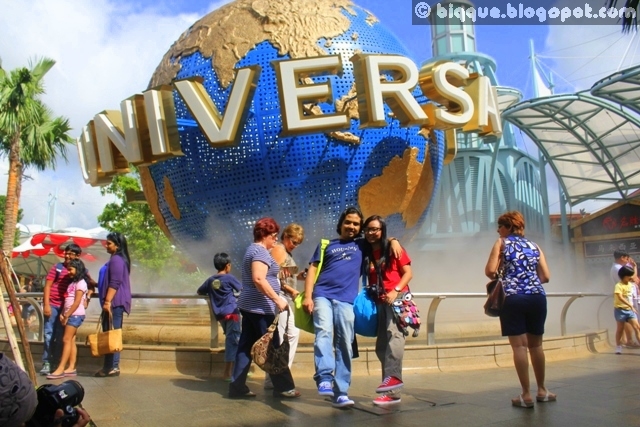 Unbuttoned by Biqque at 9:46 AM

This is about travel n vacation, travel-singapore-uss

Hahahah don't kill mi okay!!! Kata tema " anak jutawan memilih jalan susah!" So itulah kegigihannya.. Apa pon maaf di atas segala kesulitan but it was really priceless moment for me to be with u guys during the craziness event...heehehee

Biqque, I love the solo photo of u. U are so pretty :D. Seriously!

masmz, queue is the wordddddahhh!

tak menahan ayat nih : "Beforehand, I called her and clearly she spoke to me, unconsciously. A sign for us to come and save her, like…now, now, now! "
ahahahaha...you really save the day bebeh!!!

i truly felt like slapping your tiny cheek when you were like, ignoring what i said over the phone! "bangun kak anash! bangun!!!"