Unbelievable? Believe it. My cat, Kiki, LOVES tennis VERY much. He used to sit so close, right in front of the TV like this picture, in our old house.
Since we moved to the new house, there was nothing much for him to view, compared to the old house. No sliding doors to see cars passing by. No stray cats to befriend with. So he still did the same (watching TV). But this time, he will sit right on the coffee table, before us.

I admit that it was a bit scary to see the ball going back and forth during the game, not knowing who gets the point, who going to do unforced errors, but it was EVEN scarier to see Kiki aiming for the ball! (He once, jumped off the table and slap the screen...*fainted*...Luckily I regularly cut his claws!)

This was during French Open 2011, semi final between Li Na and Sharapova. Li Na through to the final, met Schiavone and won the Grand Slam. 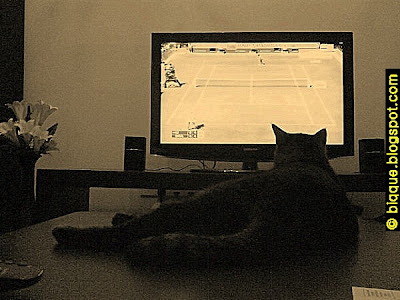 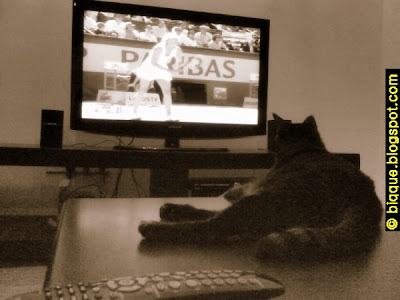 He really didn't take his eyes off the screen.
We thought he just "layan" PRO tennis, but we were wrong. Few days ago, SUKMA 2011 was aired and it happened that our Malaysian juniors between KL and Negeri Sembilan players were playing.

He quickly took his spot and watched it! 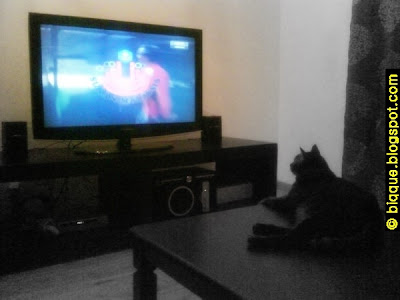 But he got disappointed, for there was not much rally in the game. So...not much ball going back and forth to aim for. Asik-asik, keluar. Pukul, keluar. Amik, keluar. Hahaha!

This is about pets

Omg, its so cute! Haha.. I love animals, including cats! I should get one one day later.

ken, he thinks that he is human you know...hahaha! always acted like human :D