Now, CONFIRM, NOT Everyone Can Fly! 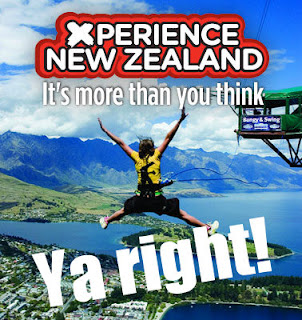 Specially for you...AA!
Opps...AA did it again! Everyone heard the news, huh?

The Kuala Lumpur-based low-cost carrier announced yesterday that it would suspend its four times weekly flights to the New Zealand destination at the end the May as part of a realignment of its network "to focus on core markets". It comes as the airline also has suspended flights to Europe and India because of factors such as high fuel prices and to improve operating cost-efficiencies. Instead, it is concentrating on markets such as Australia, China, Taiwan, Japan and South Korea."

I say : What's the problem with putting NZ as one of the core market? If AA is worrying on the inefficiency of the costing, do once a week flight lah! And instead of 80%-90% average loading, make it 100% fully occupied. Easy! What we need is only the DESTINATION, that's all.

The airline said the current four times weekly flights between Kuala Lumpur and Christchurch will be suspended with the last flight on 30 May, 2012 (from Kuala Lumpur) and 31 May, 2012 (from Christchurch). AirAsia X will offer guests who hold bookings after these dates an option of a full refund, a reroute to another AirAsia X destination, or a rebook of a return flight prior to 31 May, 2012. All changes will be made at no additional cost to mitigate the inconvenience caused as a result of the withdrawal, it added."

I say : So AA is giving options to those affected with no additional cost as well? They BETTER do that. But giving option to reroute or rebook, I tell you, is hell of frustration coz you might lose your mojo. Divert your eagerness is not fun. But refund? A combo of anger and satisfaction.

The sudden decision by low-cost carrier Air Asia X (AAX) to axe its cheap direct flights between Christchurch and Kuala Lumpur is "regrettable" for Queenstown tourism operators, but other airlines could meet Asian demand to visit the resort and the rest of New Zealand. "We are bitterly disappointed at the airline's decision to end the Kuala Lumpur to Christchurch direct flights, but understand the situation Air Asia X finds itself in," he said. "That has put huge pressure on the airline's low-cost model and, combined with the length of the Kuala Lumpur to Christchurch sector, has made the service unprofitable for the airline, which has been offering fares as low as $99."

I say : Who wouldn't? I AM ultimately disappointed with the suspension! Coz I'm planning for another road trip somewhere next year! AA is telling the whole world that they are enduring a HUGE pressure on the cost. It's funny though. Then they should have not boosting up themselves as THE low-cost airline with BIG SALE and blablabla. Misjudging travelholics who would forget when to sleep, what to eat, waiting in the "so-called" room with the f**king flying and buzzing bee, for the lowest fare? BAMMMM! AA is wrong! 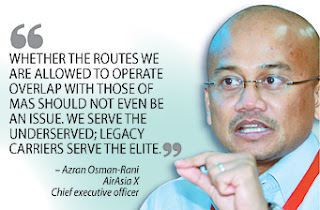 Owh...really?
Now...anyone care for Indonesia trip? I do.
When Pak Ein and his wife deserve a Da Nang trip, MIL and FIL are "force" to go to Jogja. We missed the sale before, and being monitoring the fare since then. When we are about to purchase 5 nos of ticket, AA happens to do an Indo promo (up to May), simultaneously. Such, they PURPOSELY mark-up the June tickets, indirectly to force people to go for the promo tickets, which the promo tickets are actually EXPENSIVE than the original price!
Great. It is, indeed, a love-hate relationship.

Biqque...my comment, air asia profit gain is actually based on their future ticket sale. They are boasting they made profit bla bla bla..but how can u declare profit based on that..that one is future profit. So skrg, bila the actual time comes..baru nganga kata pasal minyakla, takdak org la...