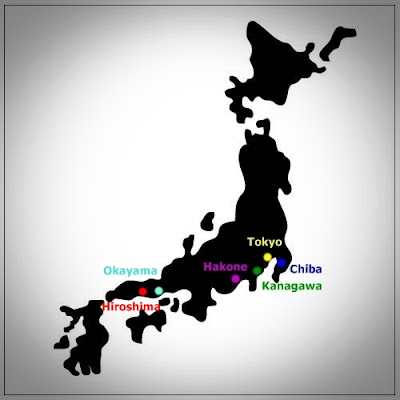 We woke up in tranquil and checked out from the hotel. As per gazetted in itinerary, we will be exploring Miyajima Island, to view the giant Tori Gate.

We took a 150yen-tram-ride and stopped at Hiroshima Station. Since Miyajima is still in Hiroshima, we left our bags in 400yen locker, and took a local train (JR Sanyo Line) to Miyajimaguchi Station. (For a cheaper price, you can take slow tram via the same route.) Again, with JR Pass, it was fully covered! 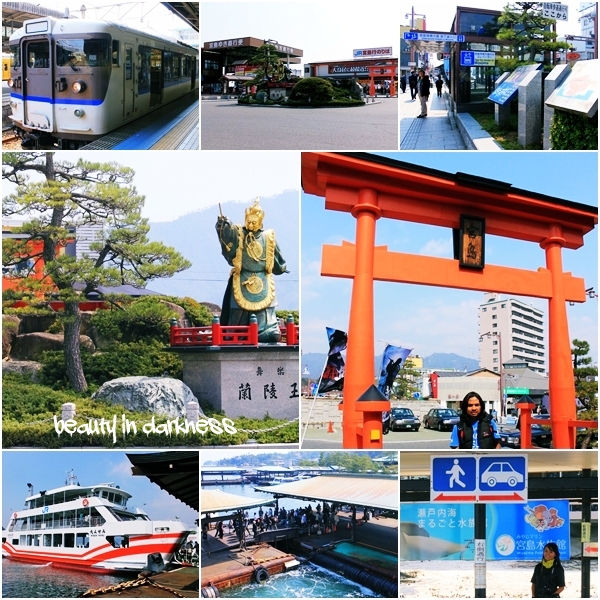 Approximately 30 minutes, we arrived Miyajimaguchi Station and took a short walk to the pier. It wasn’t difficult at all to find the Miyajima Ferry Port. With clear signboard and amazing statue before the port entrance, we started to feel overjoyed.

“It is covered under JR Pass.” Explained hubby.

WOW! Wasn’t that amazing? JR has its own ferry service! Besides JR, there was another competing ferry company that is Matsudai. The round trip ticket was 340yen for a 10 minutes ride. Another way of reaching Miyajima Island was via ropeway (cable car) that surely cost us a bomb. Just by looking at the cable car and the length to reach the island already made us cold feet! NO WAY!

We queued along with other passengers and waited for the ferry to arrive. We thought of walking faster than others, to get the best view, but thank God, the boat was super huge! Bigger than our ride to Nami Island, South Korea! 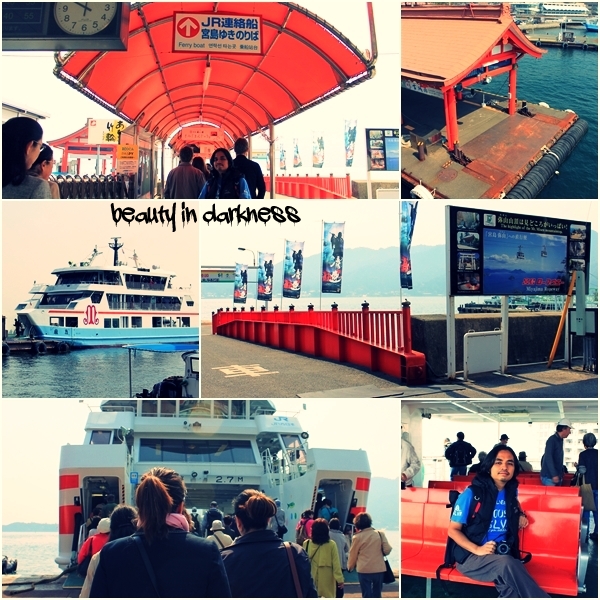 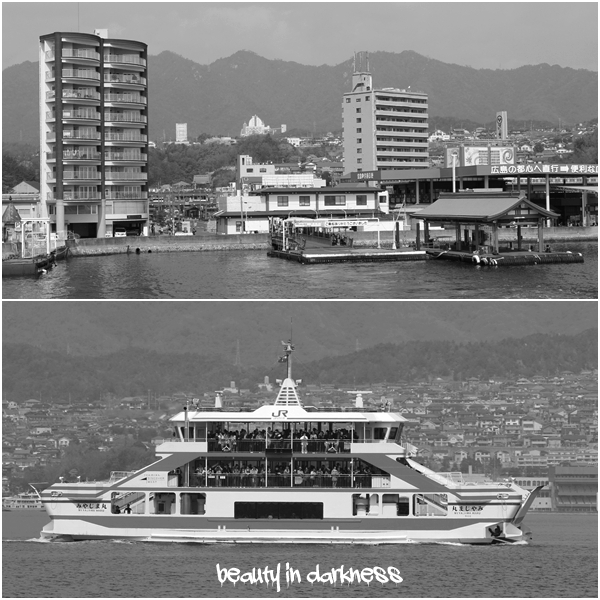 Knowing that the famous floating Tori Gate will be on the right side, we didn’t sit on the bench. Instead, we stood next to the railing and didn’t dare to leave the spot! Hahaha! 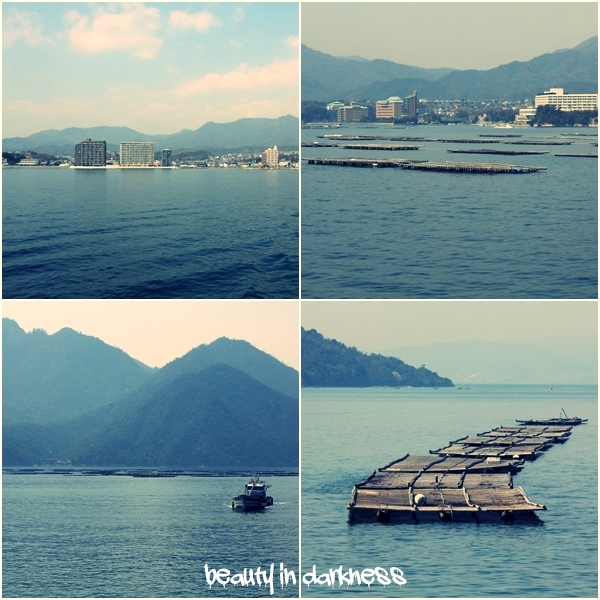 We were correct! The view from the right was the best choice to take. Though it was quite misty, with the help of zoom lens, hubby didn’t stop, not even a minute, to capture the small island and the giant Tori Gate. 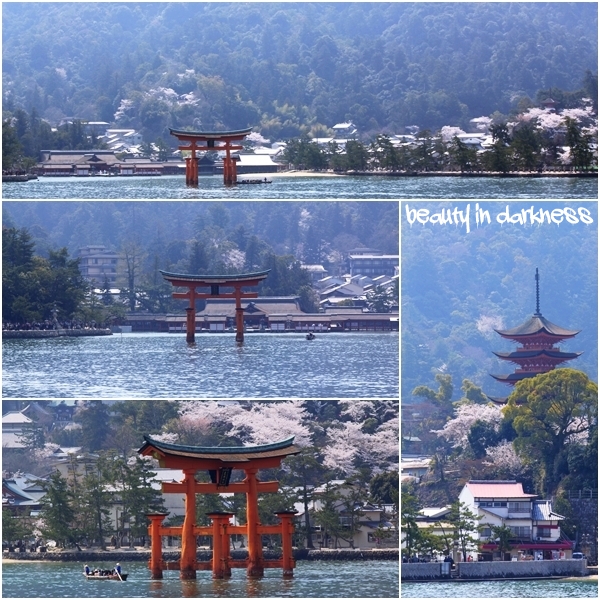 It was unbelievable to see that it seemed to float on the top of the water during high tide. In fact, visitors can walk and linger around the giant Tori Gate during low tide. From afar, we saw small boat that full of tourists, went through the Tori Gate. Since it was closely related to this “shrine-island”, going through (under the Tori Gate) was literally paying respect before “entering” the Itsukushima Shrine. 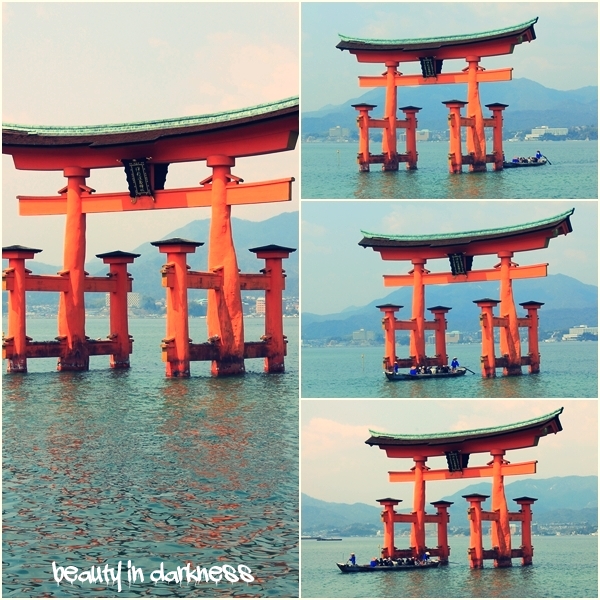 Once arrived, we hopped down the ferry and walked towards the main shrine. Similar to the Tori Gate, the shrine’s main buildings are built over water. This sight is ranked as one of the three best views in Japan, where couples considered it as a romantic place, and perfect spot for their outdoor wedding photos. 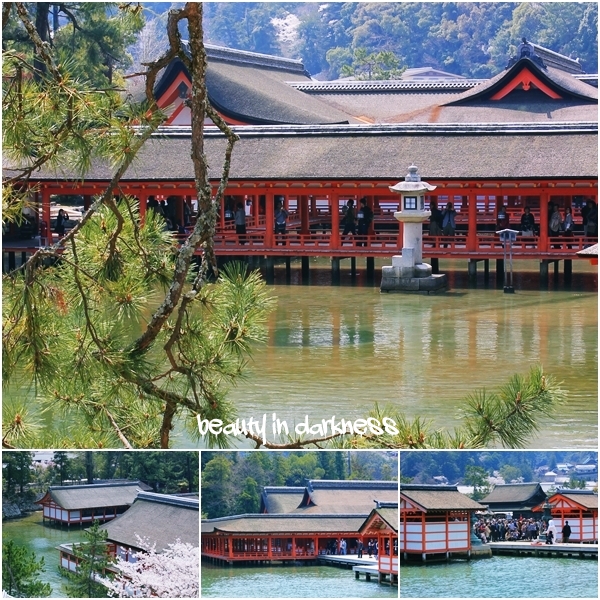 “And there! There as well!”

“SO MANY OF THEM! I thought we can only find them in Nara.” Which will be our next place to visit.

These wild deer have become accustomed to people, wandering around at the same sites as tourists. Anyhow, most of them were sleeping since it was a wonderful breezy sunny day. I tried to get closer and touched one of them, and sat in between of two lazy bum deer.

“The face looks like kangaroo, huh?” I was talking alone. Hubby was too happy to walk the deer. 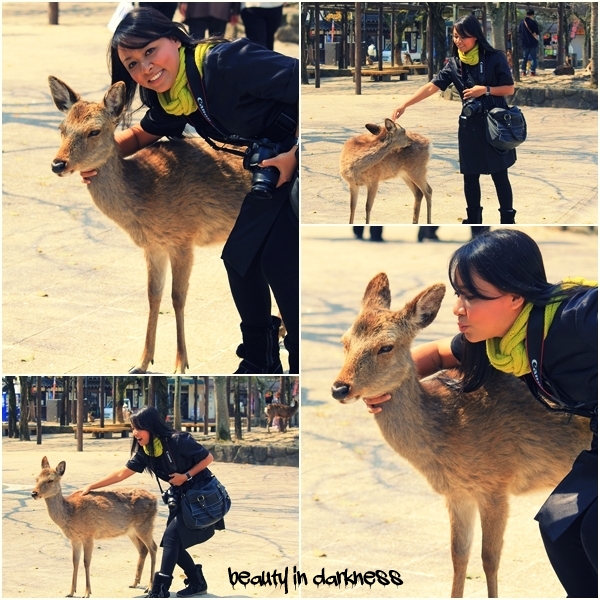 “Eh, don’t feed them.” I saw hubby putting his hand in the pocket.

“No, I didn’t feed it. It follows me tries to lick my lens.” Hahaha!

I looked around for deer food but failed to see anyone selling it. Then I saw one of the deer, EATING TISSUES!

“THEY EAT TISSUE?!” I saw more deer eating tissues. And I can imagine the taste of “paper” in my mouth! YUCKS! 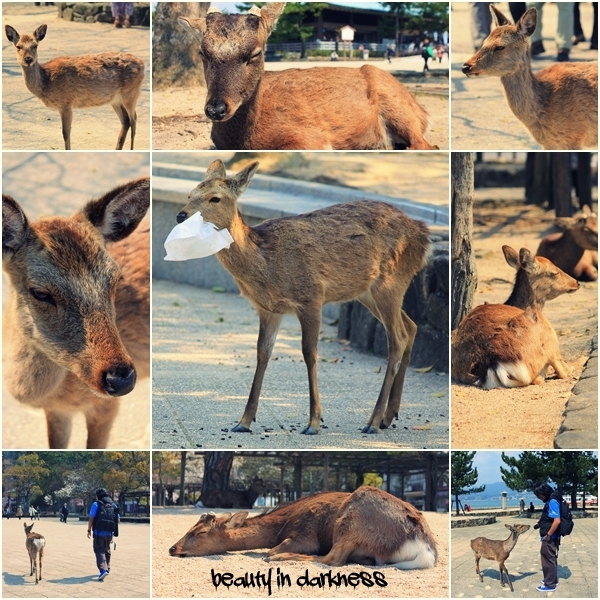 Via the walking path to the Tori Gate, we met two Malay girls from Malaysia. Dapat cakap melayu kejap. In contrary, they came from Hiroshima going up to Tokyo. 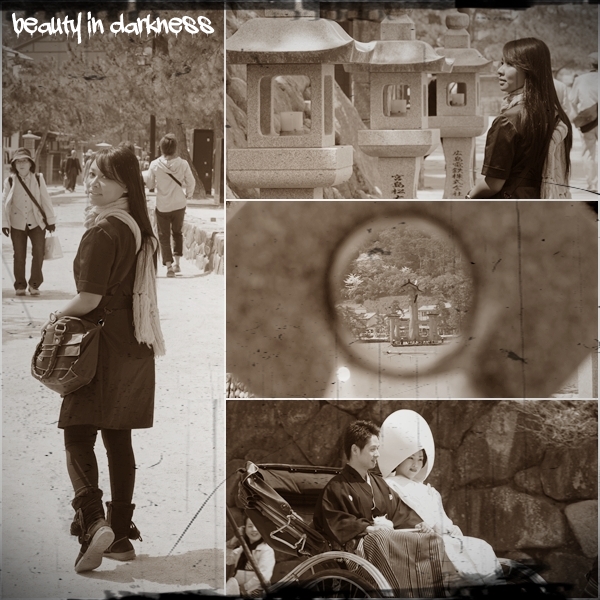 We stopped at the so-called boat dock that taking visitors under the Tori Gate, and I asked how much was the cost. Freaking 800yen! Ok, nextttt. 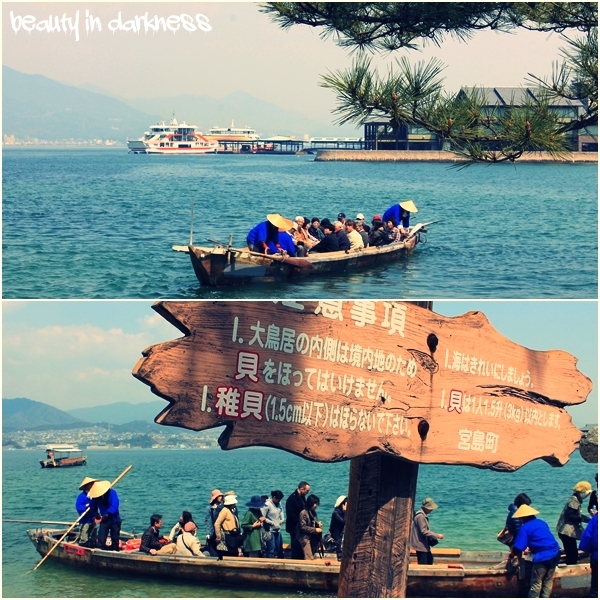 We walked further up and stopped at, I considered the most ideal place to shoot the Tori Gate. People were posing and snapping pictures after one another, including us. I setup the tripod and voila, we had 4 perfect shots! (Well, need to give others the chance as well. Hahaha!) 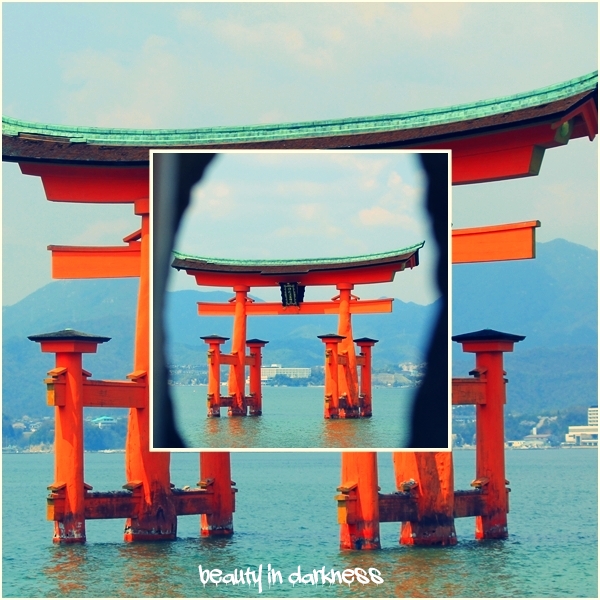 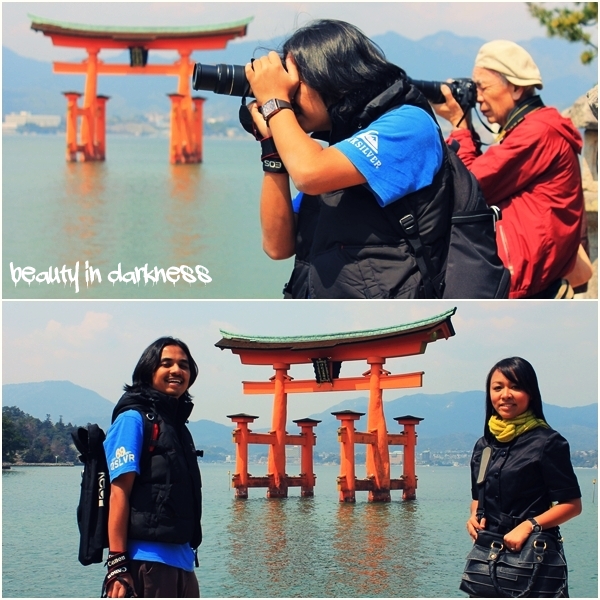 Meanwhile, a group of 20 people were arranging their spot to get a group photo. Guess what? Deer were included too! No one had arranged them and they squeezed in on their own! The photographer tried to shove them away but they still stand at the most front of the group! CRAZYLY CLEVER CAMWHORES! Hahaha! 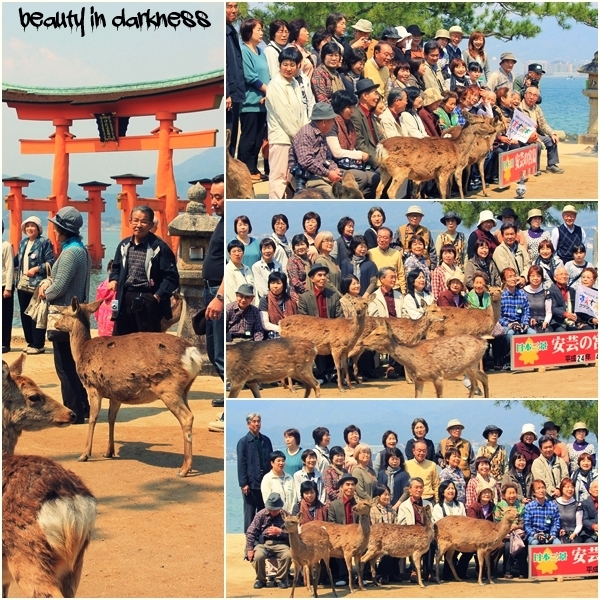 We then walked up to explore the other shrines and pagoda. From up there, we can see the whole shore, clearly. But walking down the path was super scary! We had to step one foot at a time, at the most side of the path. Hubby was slower than me, coz his flat-canvas-Nike shoes was quite slippery. 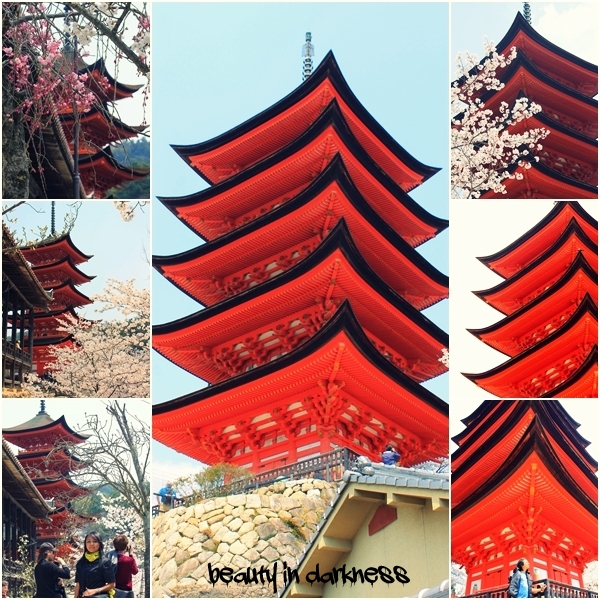 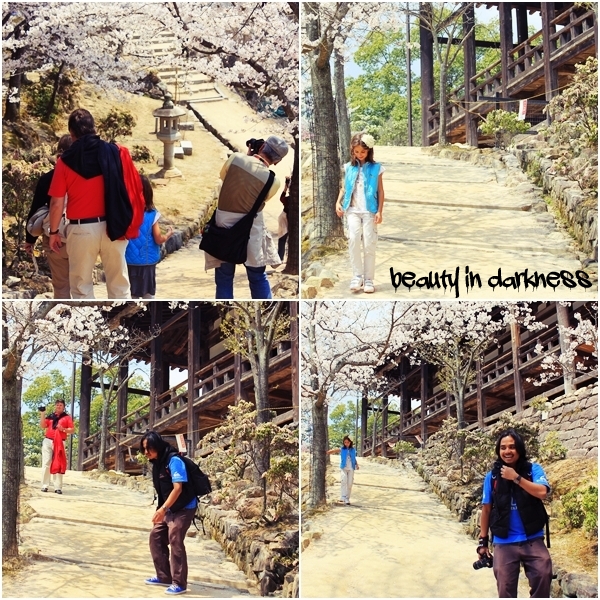 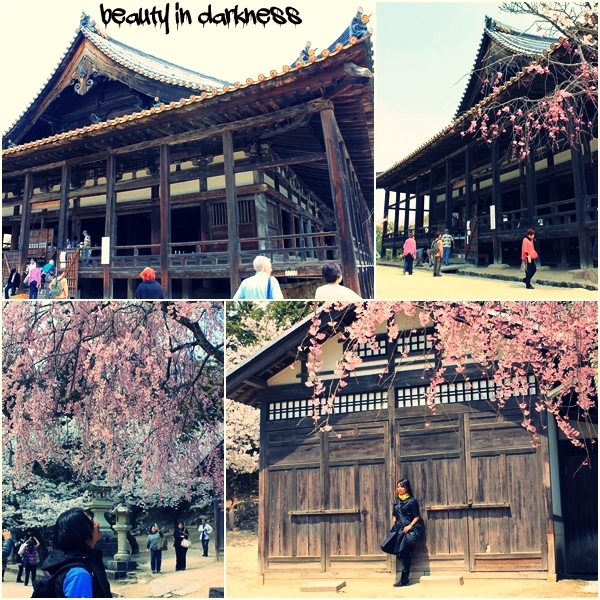 2 hours later, we walked back to the pier and looked for fridge magnet. We bought at the first shop, which later, I found other shops offered more and nicer FM! Dang… 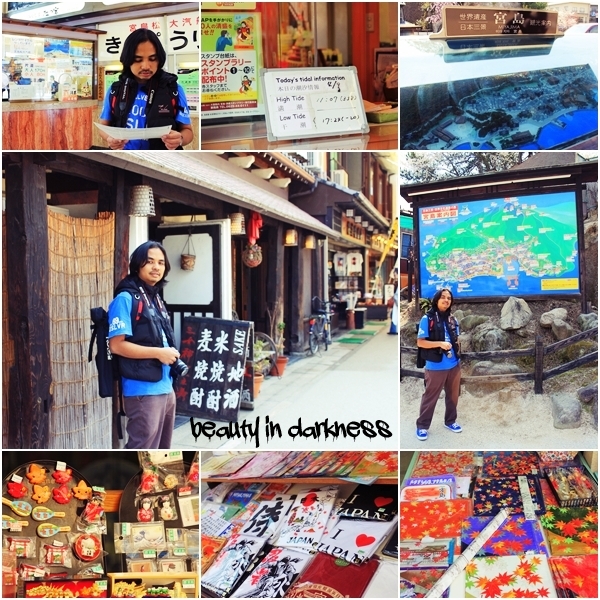 Waiting for the ferry to take us back to the main island, we snapped few pictures of the shrine, a holy site of Shinto. The pillars can be clearly seen and there was a newly wed posing on the boardwalk. Its been said that after the sun has gone down, the shrine and Tori Gate are illuminated, and guests can enjoy their evening walk in yukata and geta sandals. 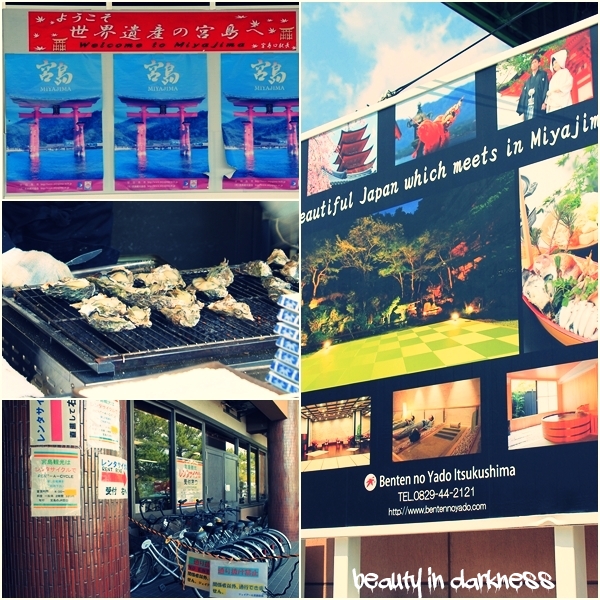 This is about travel n vacation, travel-japan-hiroshima

Hi, wow amazing pictures thanks for sharing. Would you please consider adding a link to my website on your page. Please email me back.

nice posting.. thanks for sharing.