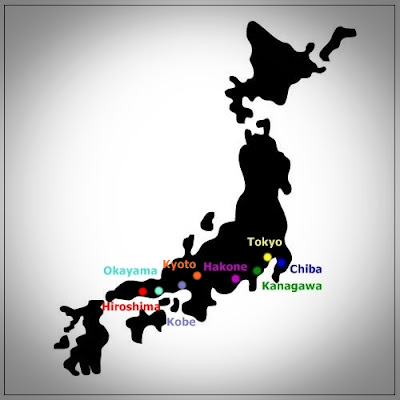 We returned to Kyoto Station and since Fushimi Inari is located just outside the Inari Station (two stations from Kyoto Station via JR Nara Line), we chose to visit this place first. At least, the ambience will be different than what Chawana has experienced earlier.

It was noon and at this point of time, I was super excited to see this Shinto god of rice. Looking at the first out of thousands of tori gates, I started to ask hubby to take my pictures. But the tori gate was super huge that he had to decide, either my face or the whole tori gate. Haha! 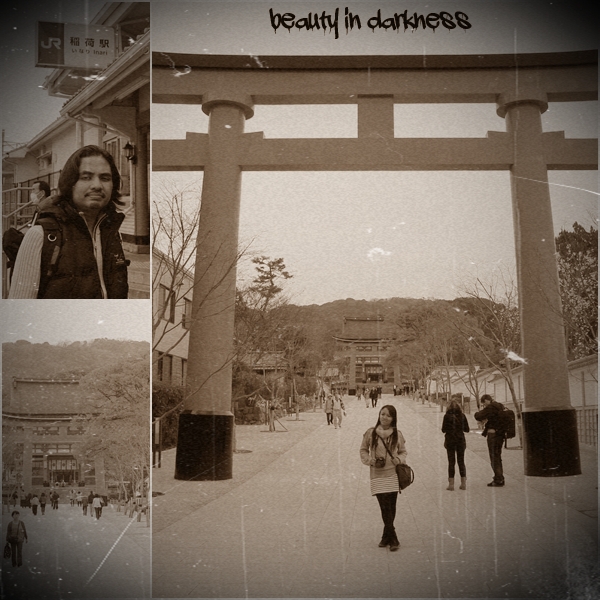 “Warning! You are going to see lots of red color!” Almost all structures in this area are red, from the biggest tori gate, to the shrine ground, to the smallest miniature of tori gate. 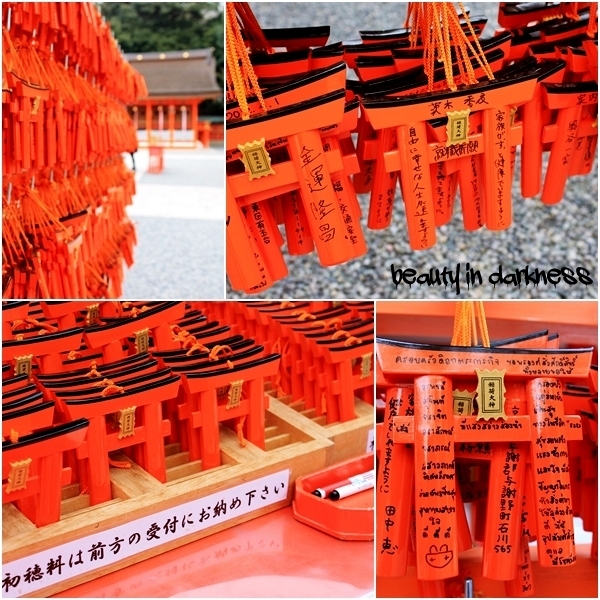 We headed to the trails behind the main buildings where it led to the woods of the sacred Mount Inari. Earlier back in M’sia, we managed to watch a documentary about Shinto, which has enlightened Fushimi Inari in it. In the documentary, they talked about foxes that acted as the messengers of Inari. And so we knew why there were many fox’s statues on the shrine grounds. 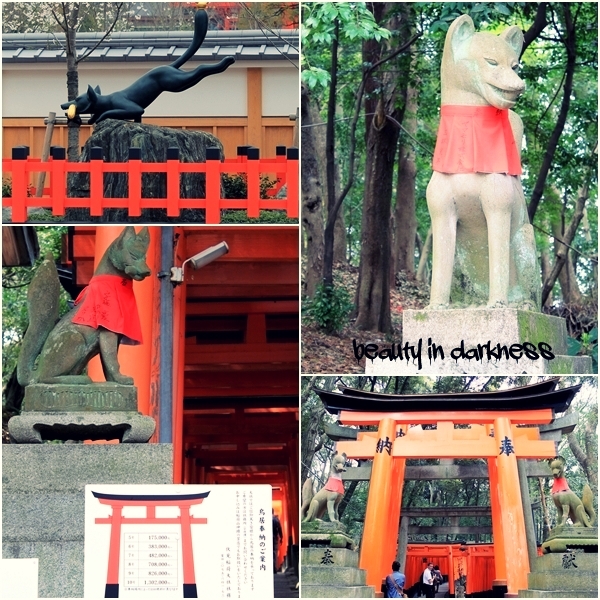 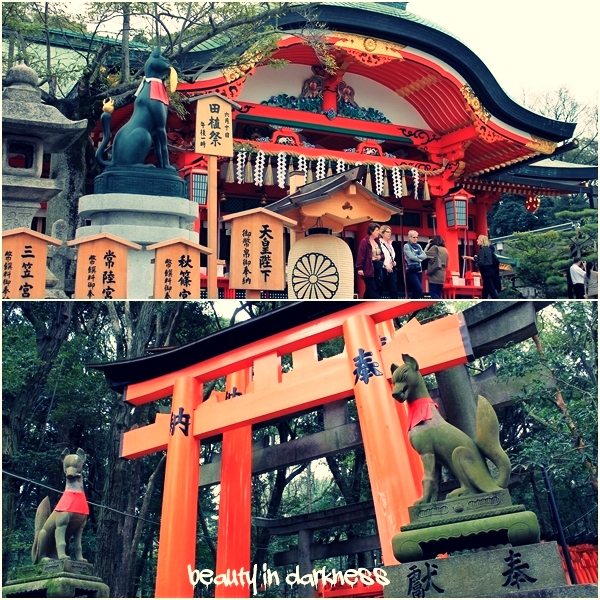 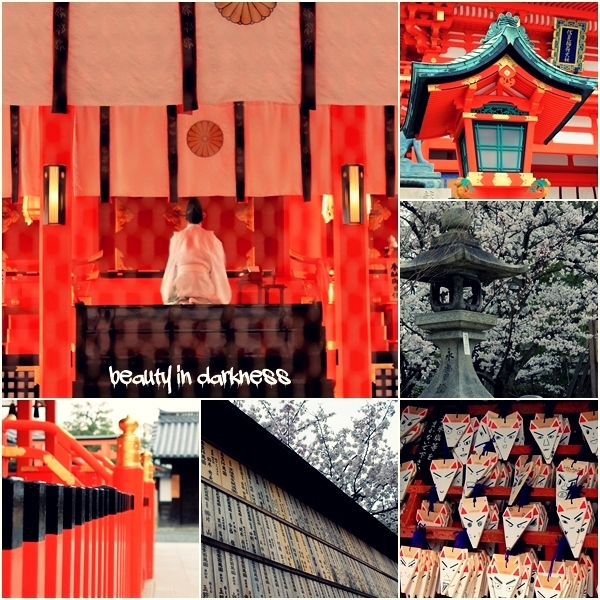 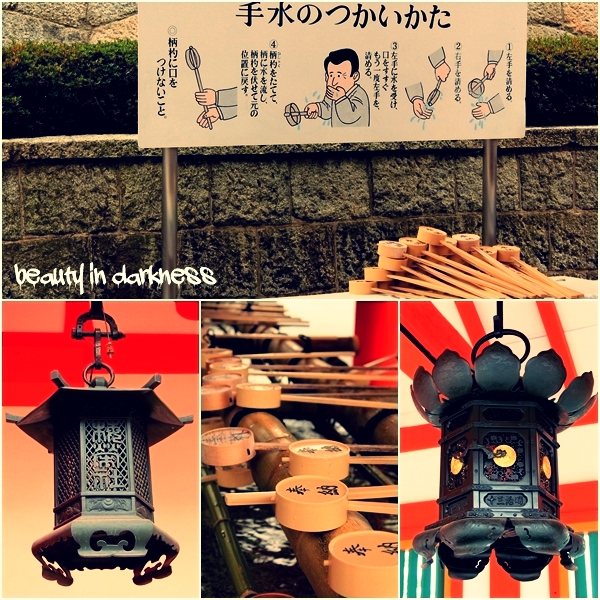 “Which one is the most expensive?” I asked hubby, knowing that every tori gate is donated by individuals and companies, has its own price. 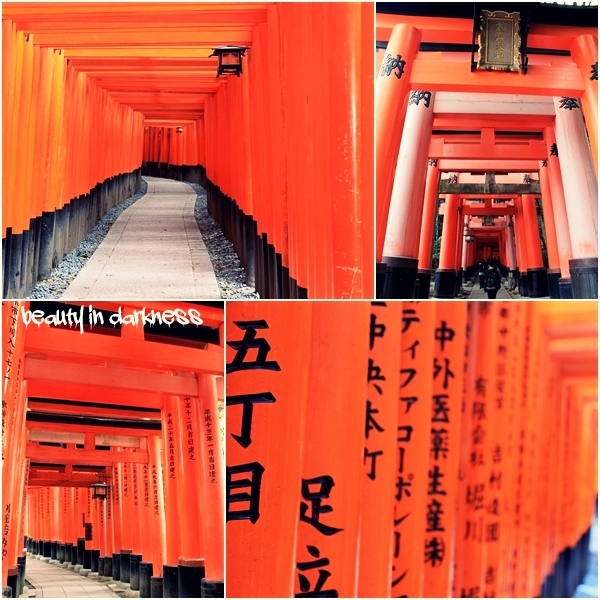 “The bigger the tori gate, the expensive it costs. So, if you see small tori gate, sure small budget…” The cost starts around 400,000yen for a small sized gate, and increased to over 1 million yen for a large sized gate.

Every tori gate is carved with date and its donator’s name at the back of the gate. Meaning, the blank side is the front. That was why I saw nothing inscribed on the gate, when I entered Senbon Tori, the parallel rows of thousand tori gates. 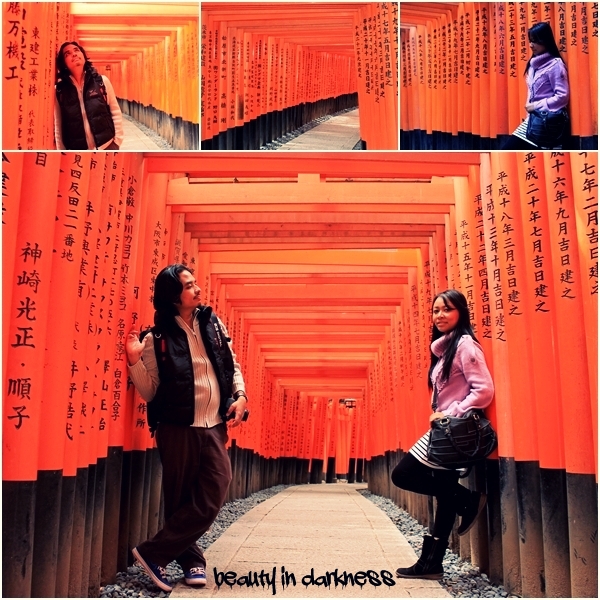 There were two trails and we chose to go for the left side upward, and planned to return via the right side downward. The density of the gates was gradually decreased, half way up. We tried so hard to take a shot without other visitors, and thanks to the architect of the tori gate, the curve of the trail had given us many perfect shots.

At the end of the trail, we stopped and setup the tripod. We waited for other visitors to finish camwhoring, but looking at these camwhores taking their own sweet time, I felt like shoving them away. 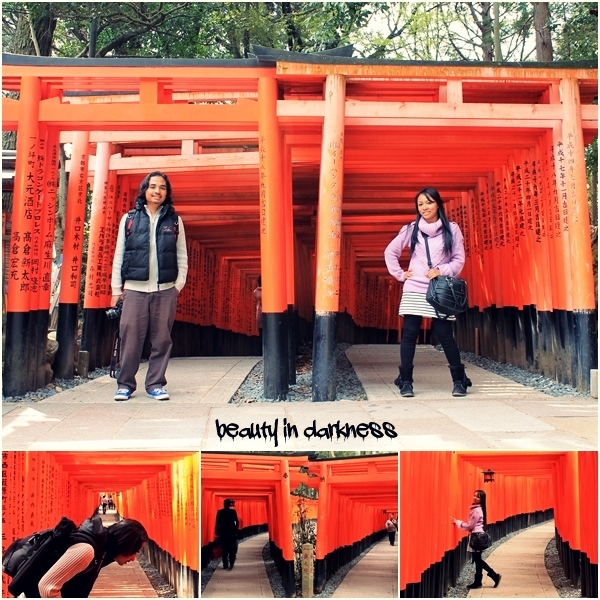 In a glance, we took ours. Snap! Snap! Snap! “Haiyo, use tripod la, easy…” I whispered to hubby’s ear.

Without taking off the tripod, I carried the camera along the way. I simply placed it anywhere I like, set the timer, and voila! Going down the second trail, then only we saw the carvings. While turning back, we saw mount hikers came down in their hiking suits, with their hiking equipments. They might have spent 2-3 hours up there. 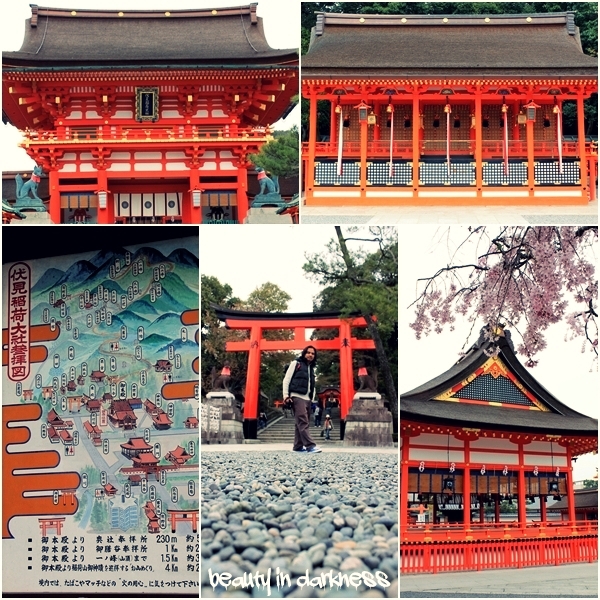 We had a quick refreshment (takoyaki) before we walked back to Inari Station, took a train ride back to Kyoto Station, and walked to the bus stop area. Looking at the bus map, every bus stop has its own bus route. Kyoto city bus is encircling the city. Either we go counter clockwise, or vice versa. We checked and confirmed that we should only take bus #206 to the next two hotspots. Other than this number, we just ignored. Easy huh? 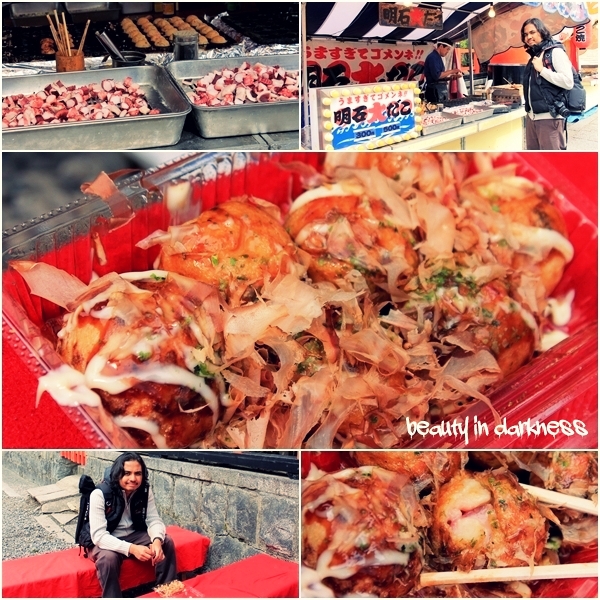 P/S : I will not stop thanking Chawana, for they had given us many tips on bus ride. It is color coded and numbered, so too bad if you printed the map in monochrome. Hahaha!

But this time, I should also thanked hubby, for suggesting Sanjusangendo. A temple that famous for its 1001 statues of Kannon, the goddess of mercy. Well, besides history and culture, we also love to know about religions around the world. So, seeing 1000-armed Kannon in Japan’s longest wooden structure hall, was really interesting. 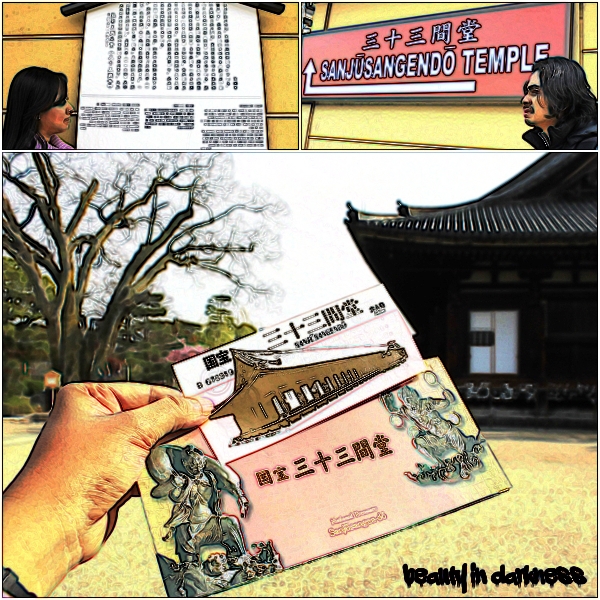 Too bad, photo capturing wasn’t allowed. We are allowed to bring in the camera but anyone who is caught taking pictures will get sentence. So, don’t ever try ya. 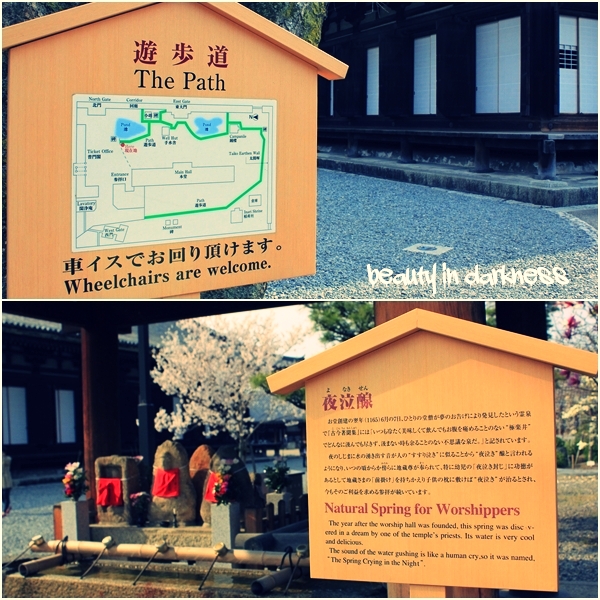 Entering the temple hall, we were welcomed with burning incense sticks. The hall was super huge and long. In the center of the main hall, sits a large wooden statue that is flanked by 500 human statues on each side, standing in ten rows. Each Kannon is perfectly carved on one piece of large wood coated with gold paint, with 11 heads and 1000 arms, to help them fight the suffering. FUYOH! 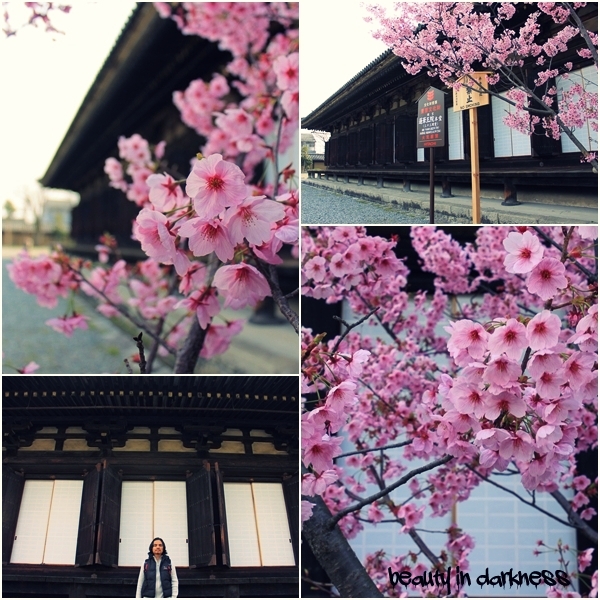 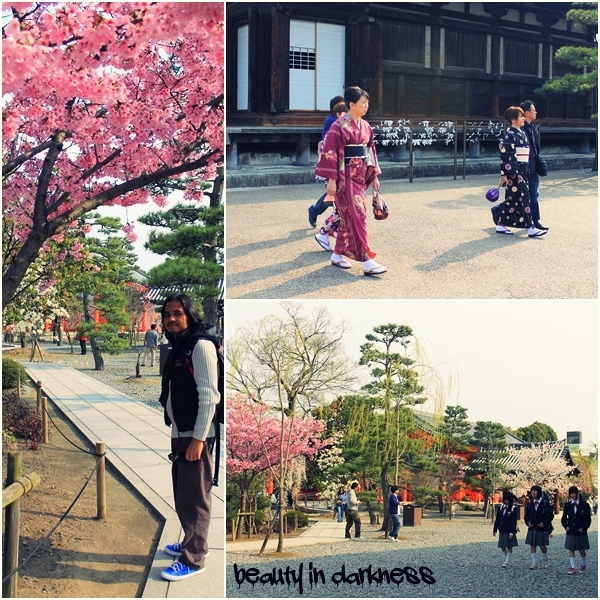 Well, actual statue has 42 arms, minus two regular arms, multiply by 25 planes of existence. FINE! I DON’T WANT TO KNOW. Hahaha! (Small pic shows a portion of Buddha in lines. CAUTION : YOU ARE NOT ALLOWED TO TAKE PICTURE!) 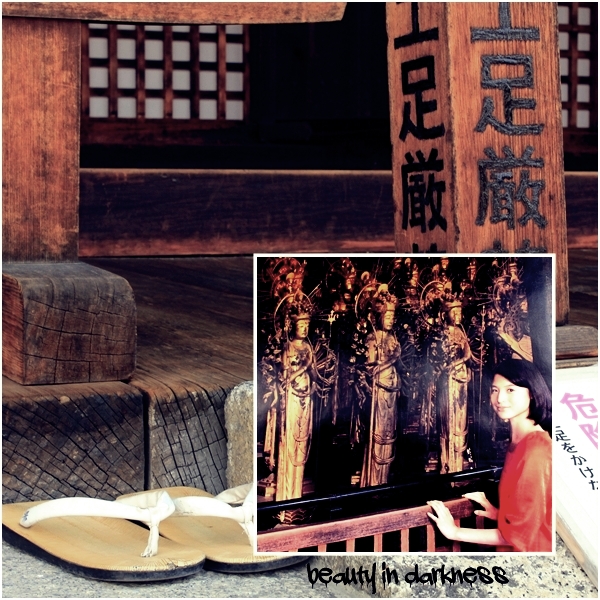 Before those thousand goddess took me to the next level, we got out from the hall. Next to the hall, there were lots of sakura flowers, blooming strikingly. We walked around the garden and snapped more pictures. I swear, the garden was BEAUTIFUL! (Terasa nak buat jer kat Palmiera Cacatus.) 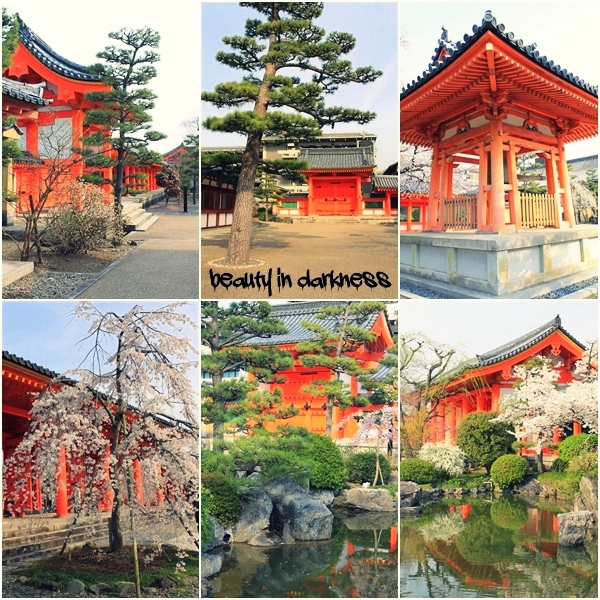 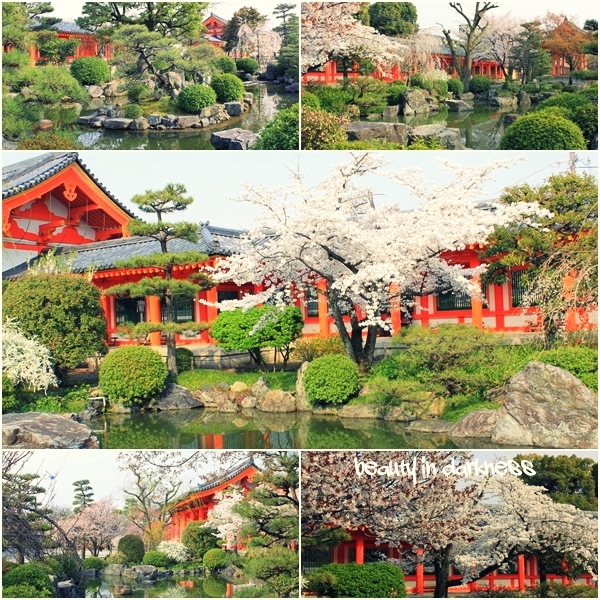 Unbuttoned by Biqque at 9:27 AM

This is about travel n vacation, travel-japan-kyoto

The sakuras are always pretty in all your photos. I guess I will never see one since my wife is asthmatic and allergic to blooming flowers as they might release tiny pollens!

As shown in the Chinese programmes of HKG TVB series aired over Astro, the olden days' concubines and mistresses always pray to Fox deities to bless them achieve their desire and goals. Sounds so salah.

I love your Tori Gates!! So colourful and vibrant, making you both macam romantic couple! I like your travel posts very much and will refer them for tips for my next visits to Japan.

twilight, pity u n ur wife...of all the allergy, she's allergic to blooming flowers??? omgggg! so unfairrrrr...

owh really? well, olden days had lots of ridiculous acts huh? pray to fox, can achieve goals hahaha! the fox might be wondering, what la this human asking for...

tx for liking my posts :) now both of us can feel each other's experience...coz ya know, it's hard to cover ALL places huh?