At 8.00pm, after we recharged and refueled our tummy tanks with tuna and bread that we brought from Malaysia, we went out to kick the first adventure, to explore the two big legends of Olympic Stadiums. We walked out from the hotel and headed to Dengshikou station. The unbelievable thing that you can see at all China subway stations is, all bags need to be laid on the conveyor, scanned and confirmed with no harmful items, before you get the access to the ticketing area. Very secured huh? (Though the young lady officer hardly looked at the screen and busy with texting).

“Hoi! Ramai gile!” I shouted. “How to get the train ticket? Auto or manual?”

We decide to queue at the counter (again, QUEUE was not in their dictionary) and someone just stepped in front of us and hand-in the money. Wah! I quickly took out my money and hand-in even further, an inch away of the officer’s face. Haha! No lah. Another good thing using the subway is, the price is fixed. RMB2 for any destination, regardless how many interchanges you’ve made, as long as you never get out from the map. So in other word, you can stay underground as longer as you want, from dusk till dawn (I bet you will get kick by the station officer right after that, haha!)

The train was full and we had to stand, all the way, passed 6 stations and stopped at one interchange called Huixinxijie Nankou. From Line 5, we changed to Line 10 and the walking distance was extremely far. Escalator was available ONLY one way of direction, either up or down, parallel with 100 steps stairway (work-out anyone?) Locals were everywhere and we had no idea where they were going. Clubbing? But the outfit? So jinjang. Nahh!

Almost 10 minutes walking with thousands of locals, we went into a train and stopped at the next interchange, Beitucheng. Believe me, there was a train for every 4 minutes! Can’t imagine, what they have during peak hours. Here, we needed to change to another Line, which was Line 8, to stop at Olympic Sports Center. Lucky they have a dedicated station for it! 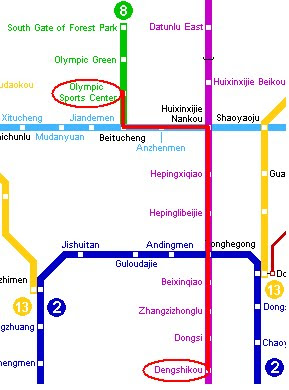 Anyhow, we needed to do some walking, still, to reach the stadium area. (Walking meant more stairs and few escalators. Zzzzz.)

We reached the ground. 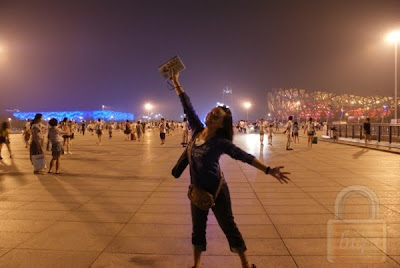 We walked towards the open space and there was a security post and again, a big scanner with conveyor, exactly like what we saw at the subway stations. Wow! Need to go through this again? We scanned our sling bags, tripod and cameras, and headed to the open space area where locals selling super-long-kites and glow-in-the-dark toys.

For far, we saw two big 2008 Summer Olympic stadiums, the blue Water Cube and the orange Bird Nest, along with the Olympic signage tower. We walked to the right, crossed the road, to get nearer to the Bird Nest. The 110,000 tons China-made steel stadium was really huge and stunning. Located at the Olympic Green, this stadium can occupied 91,000 spectators at a time, and it cost USD423 million! So rich huh China? (Even Malaysia borrowed money from them ok…) 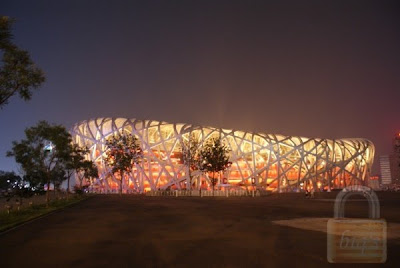 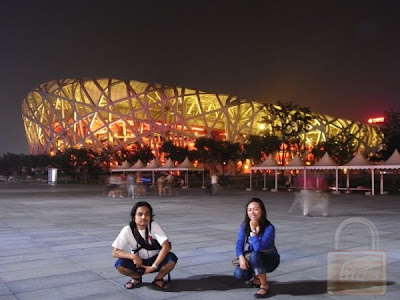 We tried to capture it digitally with the help of tripod, to minimize unsteadiness. While busying snapping here and there, the light suddenly off! 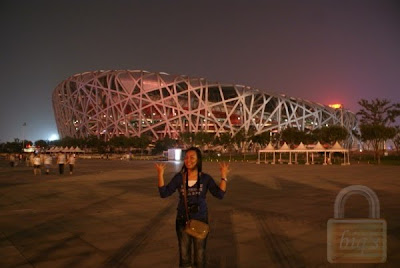 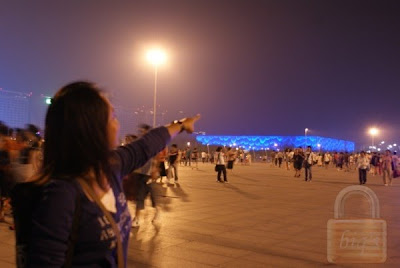 We didn’t cross the road and just took pictures from distant of the Water Cube, that hosted swimming, diving and synchronized swimming events during 2008 Olympic. Once we got our tripod and camera ready, 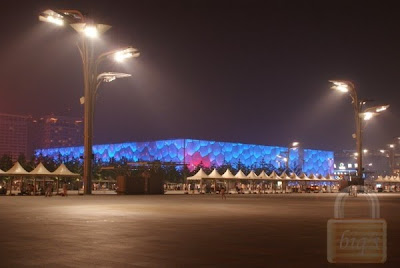 We packed and made a move towards the subway station. Along the passage, kites’ sellers kept on offering us to buy one. We bet that if we bought one, ours must have been the longest on air at Taman Layang-layang at Kepong, next to LDP and MRR2. Hahaha! Sure glamer oneeeee! But we didn’t buy one la. 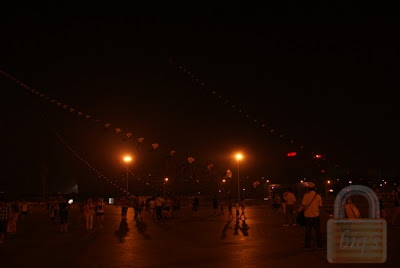 “HUH?! YA ALLAHHHH...DAH TUTUP?” we looked at each other.

“Sure kan kita datang dari sini tadi?!” I was pretty darn sure that was the exit where we came from.

“Baru pukul 10pm! They shouldn’t have closed it!” hubby started to complaint.

We looked around, looking for someone that we can ask for. But no one seemed to know what was happening. No officers understand English. Where should we go then???!!!

We then saw one white family and a group of white teenagers. We followed them, crossed the road, to the other entrance of subway. The gate keeper didn’t allow us to go in, but when the white guy kept on showing him the time, forcing him to let us in, he quickly made a gap at the gate and let us in. I swear to God, we ran like we were chased by Godzilla (you could NEVER see me ran like this in this 53kg), running down the 100 steps stairs, finding a way to the ticket counter. And my husband left me behind! Zzzz.

“CLOSE! CLOSE!” with his Tyra-fierce face.

“Kurang ajar nyer *&&^%$%^*! Dah tutup jugak ke! They are not supposed to close it yet!” we grumbled next to the white man and his family just now. 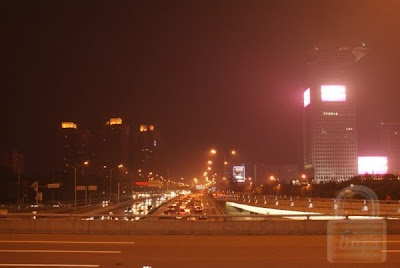 We tried to figure out the nearest subway line and its direction, and walked another 200 meters, till we finally stopped and decided to hire a cab since it was already 11.30pm. We made sure that we stopped a legitimate taxi, and yes we did, a green and yellow cab agreed to bring us back to the hotel. So ALWAYS have your hotel name written in Chinese ok!

We got in and the first thing that we asked him was, to use the meter, and he nodded. Second thing that I paid attention to, was the price sign, on the passenger’s right window.

“What to do…you wanna walk back?” hubby scared me out.

There are three types of taxi in China. The one that start with RMB1.20 (China-made Xiali car, red color), RMB1.60 (Citroen/Volkswagen, turquoise and yellow color) and RMB2.00 (old, black, biggish car that totally different than what we were in that night).

We paid for RMB30 and the cab stopped at end of the “hutong” (alley), before the Dengshikou station. We walked back to the hotel and bought a bottle of drinking water. The Fair Price Market seemed to be very fair, with an old non-English-speaking-auntie at the back of the counter. Goodnight ah so…